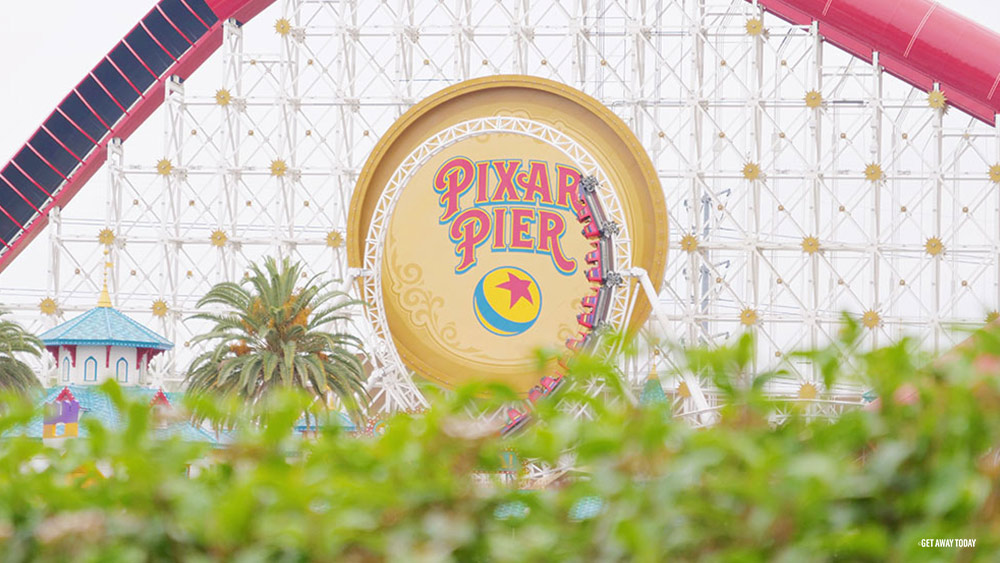 Top Things to do at Pixar Pier

It's always exciting when Disneyland opens a new land or attraction. Pixar Pier was once part of Paradise Pier at Disney California Adventure Park, but with very different theming. From new and returning beloved attractions to new dining locations and merchandise, it feels like a whole new land! The land officially opened in Summer 2018, but wasn't completed until July 2019. We were able to visit the complete Pixar Pier this summer and we love it even more than we did when it first opened.

Pixar Pier is made up of four distinct neighborhoods: Incredibles Park, Toy Story Boardwalk, Pixar Promenade and Inside Out Headquarters. Each neighborhood celebrates a different story or essence of Pixar. You can still watch our video that we made when Pixar Pier opened with our top 5 things you must do at Pixar Pier. Enjoy:

Now that Pixar Pier is complete, we wanted to update our list of things you must do at Pixar Pier. There are SO many more than five, so we've included them below:

The Incredicoaster is without doubt the main attraction in all of Pixar Pier. Located inside Incredibles Park, you will be amazed at the attention to detail and the fun story telling that is part of the rollercoaster once known as California Screamin'. You'll now be screaming about how much you love the Incredicoaster. 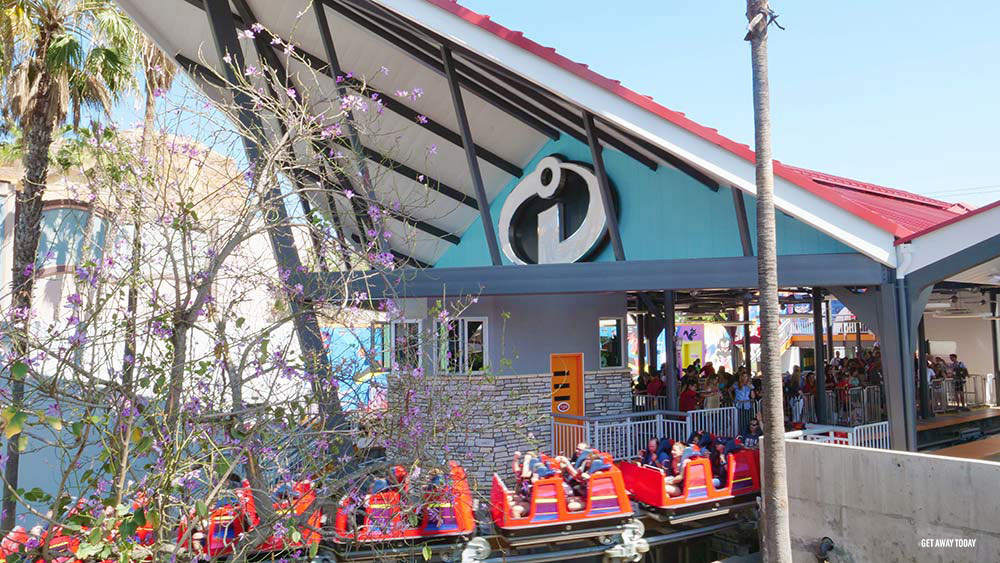 Because it is so popular, we recommend getting a FastPass. You can also utilize the Single Rider line if everyone in your party is over the age of seven and doesn't mind sitting in a different row. Another tip to consider, is to try to ride the Incredicoaster once during the day and once at night. Trust us when we say it will feel like a completely different experience!

Although not new to Disney California Adventure Park, Toy Story Midway Mania! fits so perfectly into the Toy Story Boardwalk at Pixar Pier. It's so nice to see the surrounding area pay proper homage to one of the most beloved Pixar series of films of all time. It just feels right! 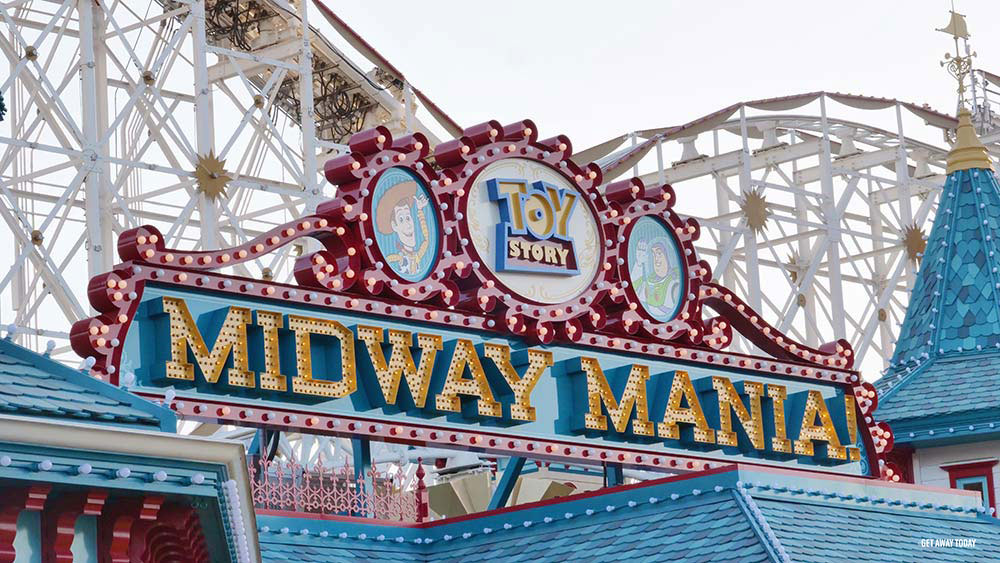 Toy Story Midway Mania! also features a FastPass option, so you'll want to get one or more, depending on how many times you want to ride. If you're really competitive, you may want to ride again and again to beat your last score.

Games of the Boardwalk

The Pixar Promenade is definitely a place you'll want to spend some time exploring, but the Games of the Boardwalk will make you want to participate. You'll find four different games to play: Wall-E Space Race, La Luna Star Catcher, Bullseye Stallion Stampede and Heimlich's Candy Corn Toss. Buy a game card and then play for prizes. It's by far the funnest way to get your souvenirs! 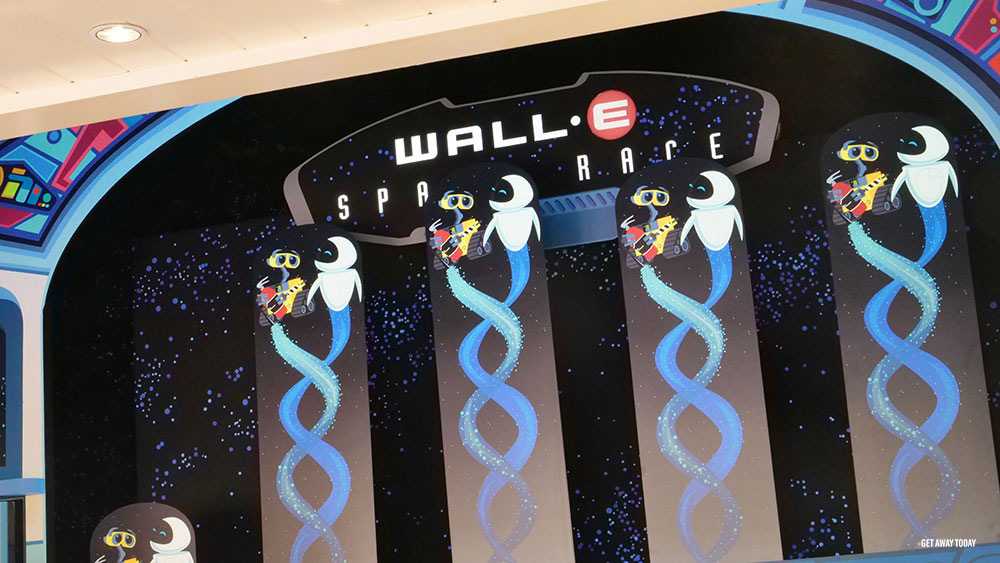 Mickey's Fun Wheel is back with a whole new name and look. It is quite possibly the most photographed icon in Disney California Adventure Park. And while it still spotlights everyone's favorite mouse, it also now it features a pair of Pixar pals on each of the 24 gondolas. There are swinging and non-swinging gondolas available, each with their own line. The swinging gondolas can be quite intense, so make sure you get in the line for the gondolas you want to ride. If you're not a fan of riding ferris wheels, you'll still want to watch and see if you can spot your favorite characters. 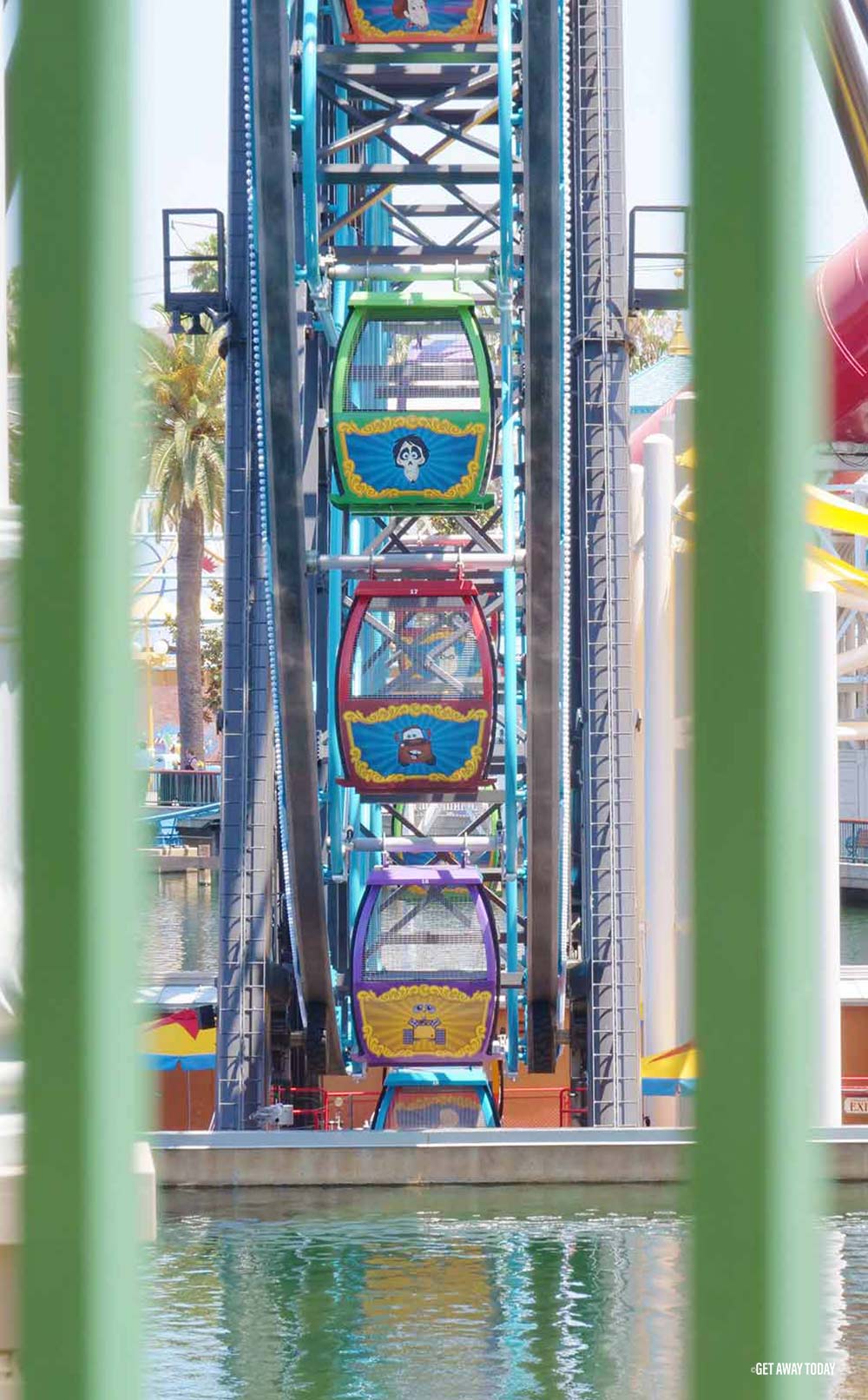 The Food at Pixar Pier

The food options at Pixar Pier are so vast that they truly deserve their own video, which is exactly what we did here: Top 5 Pixar Pier Food Items. Pixar Pier has everything from quick snacks in carts throughout the land to gourmet cuisine at the Lamplight Lounge. Everything in Pixar Pier is so good that we suggest creating your own "food crawl" by ordering one or two menu items from each of the quick service locations and sharing with your group. You can even mobile order from Adorable Snoman Frosted Treats!

The Lamplight Lounge is so amazing that it actually took the place of two formerly hugely popular dining locations: Ariel's Grotto and the Cove Bar. When you figure this lounge replaced those two restaurants, you know it's going to be good... and trust us, it is! You can make reservations for the Lamplight Lounge up to 60 days in advance, which we highly recommend to get your first choice of days and times.With all of the fun Pixar decor, we suggest planning on spending an hour or two for a meal here. 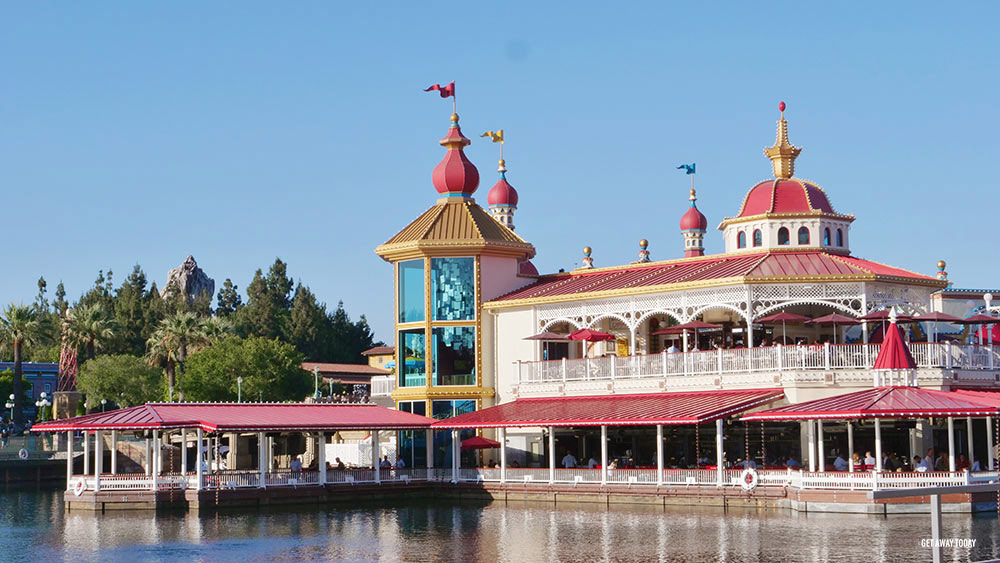 There's nothing sweeter than a visit to Bing Bong's Sweet Stuff. This storefront is part shop, part confectionary. You can find all sorts of treats to enjoy while you're at Pixar Pier, like caramel apples, rainbow cotton candy and frosty "Memory Refreshers." You can also buy treats to take home like brightly colored salt water taffy and other wrapped candies, as well as non-edible souvenirs like t-shirts, plushes and accessories. 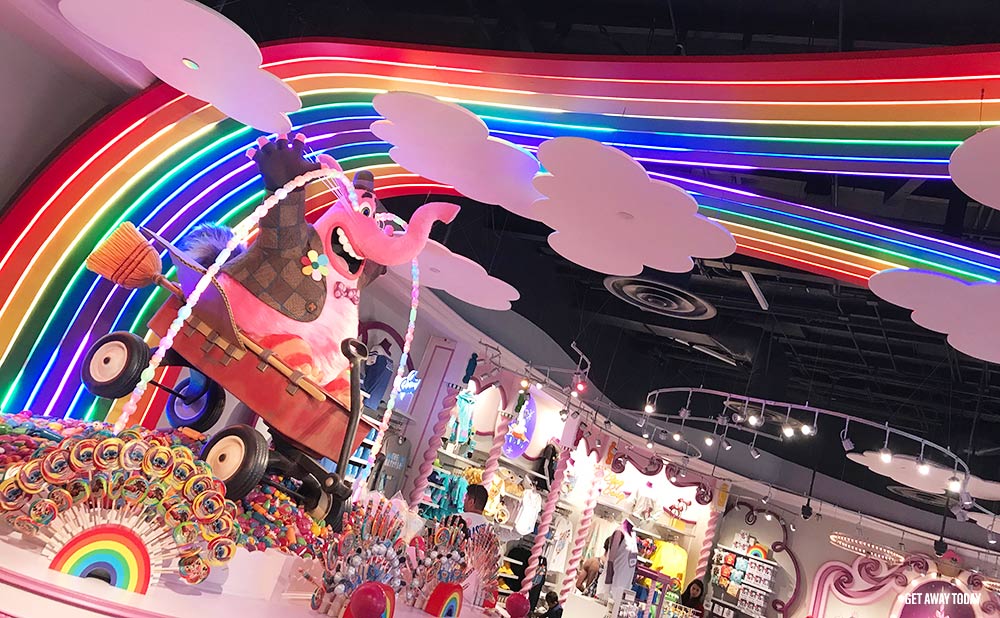 Round up your crew for a rootin' tootin' ride aboard Jessie's Critter Carousel. This is one of the most unique and most fun carousels you've even been on. Jessie leads her critter pals including bunnies, skunks, snakes and more on a spinning adventure set to her song. 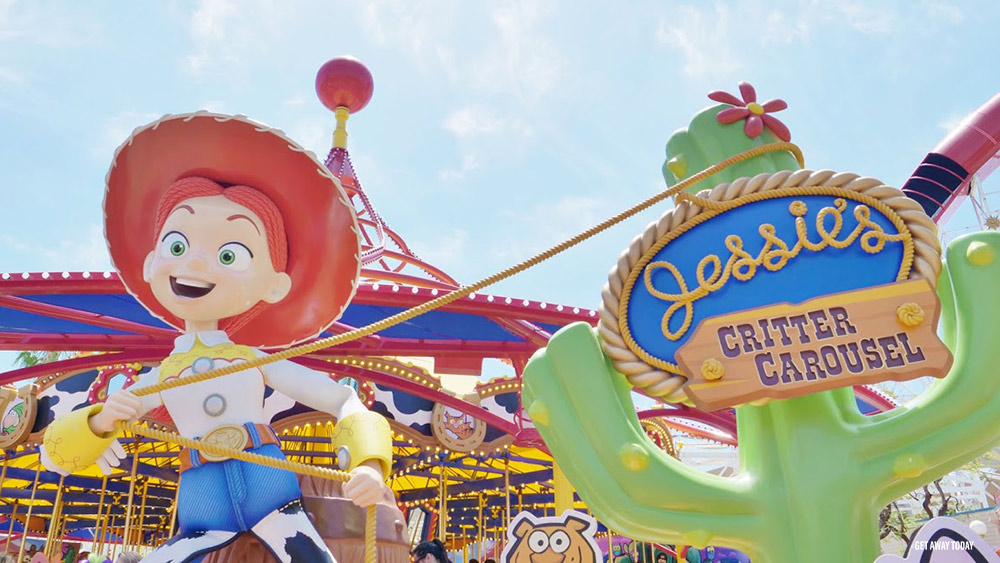 Inside Out Emotional Whirlwind

The last and final attraction to become part of Pixar Pier is the Inside Out Emotional Whirlwind and we do not have mixed feelings about it. The attraction just brings us pure joy! You'll board one of eight "memory movers" for a pleasant journey through Riley's emotions. 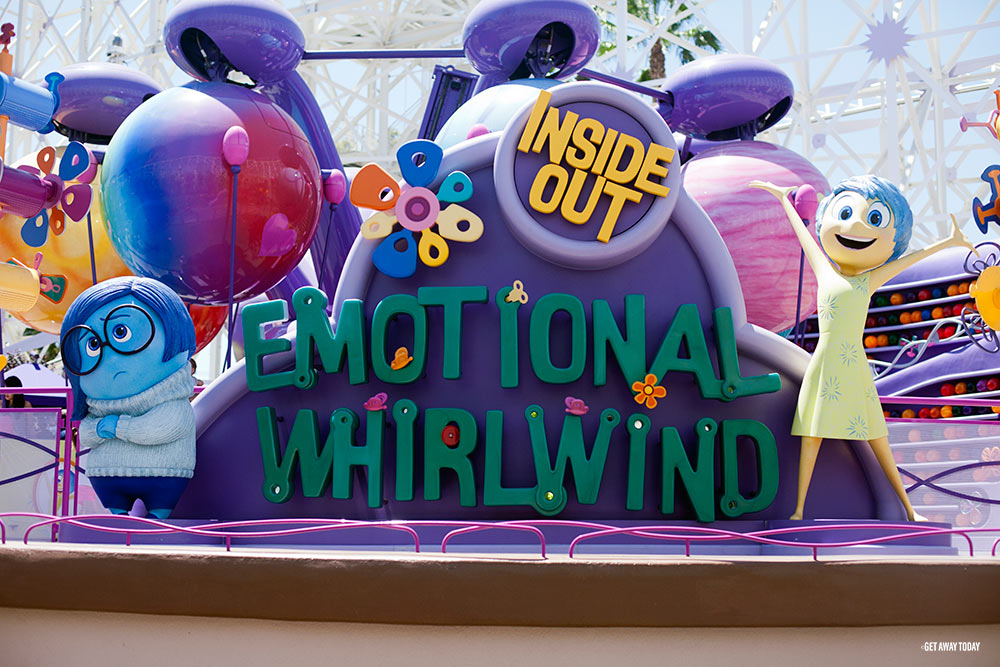 We are so excited about how amazing Pixar Pier is and love how it is an instant favorite with families of all ages. When you're ready to book your Disneyland vacation, remember that you've got a friend in all of us at Get Away Today. We'd love to help you find the best deal on your hotel and tickets, and we'll take care of you every step of the way.

You can find our Disneyland packages online, or you can call any of our reservation agents at 855-GET-AWAY.

Check out more information on Pixar Pier and Pixar Fest:
Pixar Pier Enhancements - the What, When, Where and Why
Pixar Fest Food: An Inside Look
A Glimpse Into Paint the Night Parade at Disney California Adventure 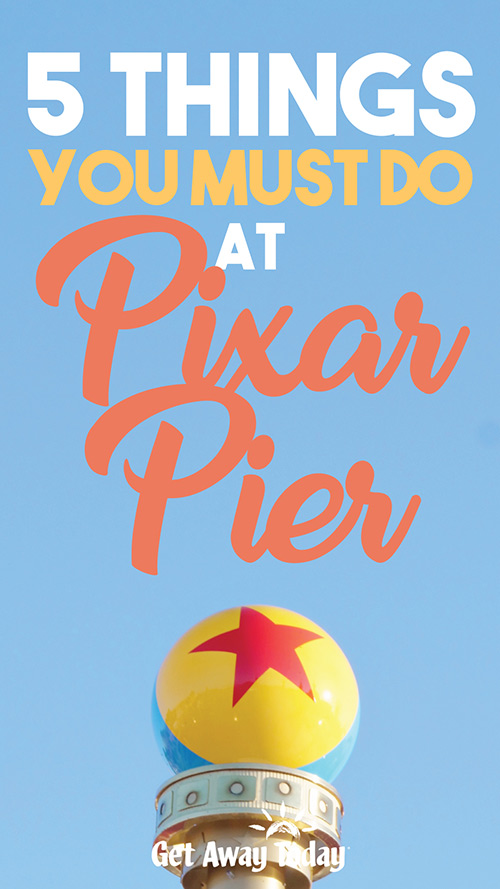