Hollywood Boulevard in Disney's Hollywood Studios® will welcome you to the park with reminders of the grandeur and style of the 1920s. 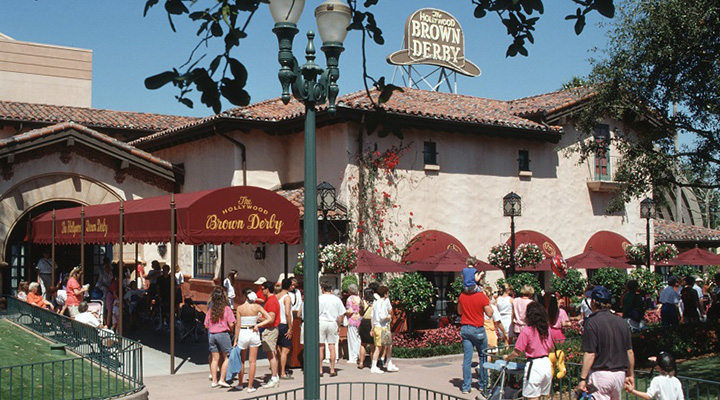 As you take your first steps into Disney's Hollywood Studios, you’ll be welcomed by the dazzling Hollywood Boulevard. Reminiscent of days past, Hollywood Boulevard offers unique entertainment, shopping and dining. Take a look at all you can find here:

The grandeur and excitement of years past can be felt as soon as you enter Disney's Hollywood Studios®. Taking a stroll down Hollywood Boulevard, you’ll find a multitude of shopping, dining and even entertainment options.

Find unique Disney souvenirs and memorabilia while wandering the shops of Hollywood Boulevard. Fine clothing, limited edition items, pin stands and more are all available on this iconic street. If you’re looking for a bite to eat, you can stop by the Trolley Car Café for snacks. This is also where you’ll find your Starbucks® fix in Disney's Hollywood Studios®.

If you prefer a sit-down restaurant, The Hollywood Brown Derby is your go-to. The elegant restaurant features the Golden Age of Hollywood with delectable dishes and authentic décor. For special occasions, we recommend dining with a Disney Imagineer or booking a Fantasmic! dining package here. Reservations are recommended, especially for the special dining packages, and can be made up to 180 days in advance.

At the end of Hollywood Boulevard, you’ll find Mickey & Minnie's Runaway Railway, which will open in 2019. It's said to be the first of its kind and is the first Mickey-themed ride in all the Disney Parks. Other entertainment, including the March of the First Order and Star Wars: A Galactic Spectacular, will happen throughout the day along Hollywood Boulevard. With so much excitement, you’ll want to make sure you check the park map or Disney World app for up-to-date times and locations each day.

Please note, the above information about Hollywood Boulevard may be incomplete, seasonal, and/or subject to change at any time.