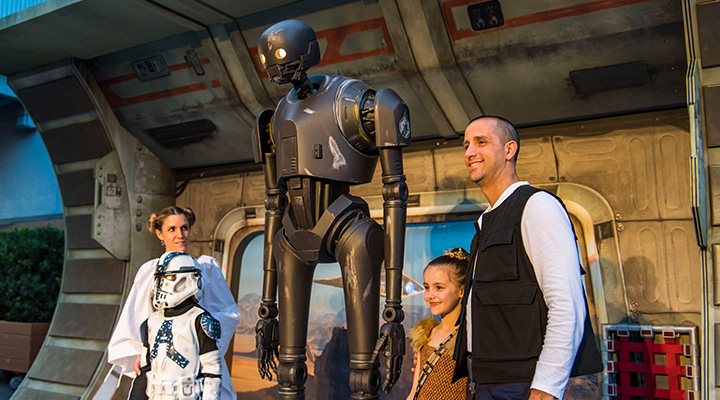 Explore part of the Star Wars galaxy that’s never been explored before when Star Wars: Galaxy’s Edge opens. The large expansion will debut in Disney’s Hollywood Studios in late fall of 2019. It will showcase Batuu, a remote outpost that is home to characters who prefer to stay out of the limelight. There’s quite a bit we don’t know about the new land, but what we do know has us giddy with the Force. Here are just a few of the things you’ll see at Galaxy’s Edge in 2019:

Star Wars: Galaxy’s Edge will be one of the most creative and immersive expansions that the Walt Disney Resort has seen since opening in 1965. Even while much of the land is shrouded in mystery, guests are more excited for the land than anything else. Especially because we do know that it will include at least two attractions – one that lets you pilot the Millenium Falcon. If that isn’t exciting enough, the second attraction will put you on a Star Destroyer in the middle of a battle between the Resistance and First Order.

Character encounters will be another major part of Star Wars: Galaxy’s Edge in Disney’s Hollywood Studios. Expect to run into a few Star Wars favorites, as well as some rogue traders and bounty hunters. You’ll want to be careful piloting the Millenium Falcon and Star Destroyer, since the word on the street is that how you pilot those will affect your interactions with these characters. We don’t know about you, but we don’t want to be on the list of any of Batuu’s top bounty hunters!

Lastly, food and merchandise inspired by the Star Wars galaxy will be available. While definite details haven’t been shared, Disney has released that the infamous blue milk will be served at a cantina style dining location. Marketplaces inspired by Istanbul and Marrakech will also have a home in Galaxy’s Edge, allowing guests to purchase exclusive Star Wars merchandise.

The Force is strong with this land – we can’t wait until Star Wars: Galaxy’s Edge debuts in Disney’s Hollywood Studios in 2019! Make sure to watch our social media channels for the most up-to-date information on Galaxy’s Edge and more.

Please note, the above information about Star Wars: Galaxy's Edge at Disney's Hollywood Studios® may be incomplete, seasonal, and/or subject to change at any time.