The Disneyland Resort is known for hiding fun secrets throughout the parks. Today, we have 11 Buena Vista Street Disneyland secrets. Find out even more about this special place located inside Disney California Adventure Park. 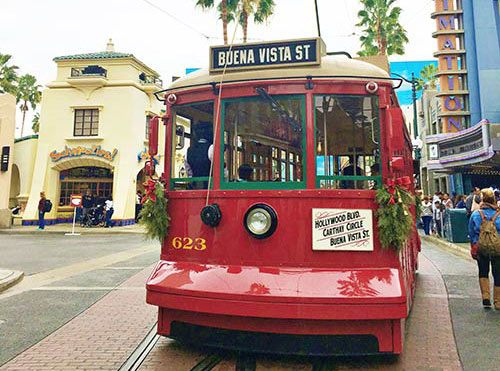 Buena Vista Street in Disney California Adventure Park is similar to Main Street, U.S.A. in Disneyland. This themed area transports guests to 1920’s Los Angeles, when Walt Disney arrived from Kansas City, Missouri. We thought it would be fun to put together a list of the most interesting Buena Vista Street Disneyland secrets and tips that created the foundation for the Disney Company on Buena Vista Street! Have fun traveling back in time with these Buena Vista Street Disneyland secrets:
1. Storyteller’s Statue: Similar to the Partners Statue at the hub in Disneyland. The Storyteller’s Statue on Buena Vista Street in California Adventure Park is an image of Walt traveling to California with a vision of what could be… Walt said of his trip to California, "I came to Hollywood and arrived here in August 1923 with forty dollars in my pocket and a coat and a pair of trousers that didn't match. And one half of my suitcase had my shirts and underwear and things and the other half had my drawing materials.” 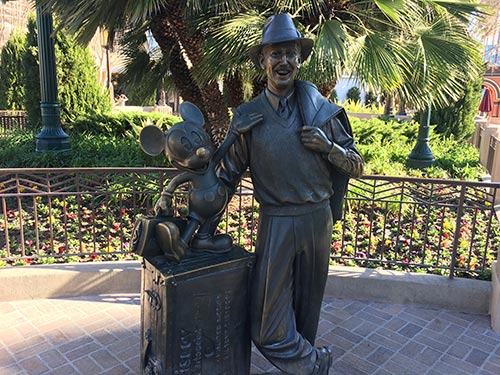 There is Disney history hidden in the Storyteller's Statue. Combined these make one of our 11 Buena Vista Street Disneyland secrets:

The Laugh-O-Gram studio in Kansas City, MO is still standing.  A local group is hoping to renovate the building and is fund raising under the name of “Thank you Walt Disney.” Walt’s original self-made Laugh-O-Gram business card image is the logo for the building and the lettering is memorialized on the side of Walt’s suit case in the Storyteller’s Statue.
2. Julius Katz and Sons: Julius the Cat was Walt Disney’s first cartoon character. Created in 1922 in Kansas City, Julius made his debut in the Alice Comedies. The store on Buena Vista Street is an homage to this very first Disney cartoon character. 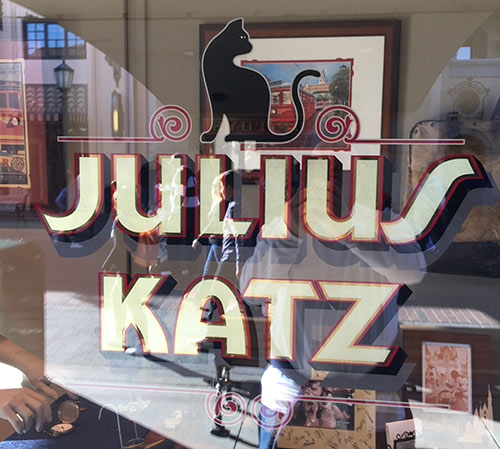 3. Oswald’s Tires: This store front is a shout out to Walt Disney’s second cartoon character created in 1927, Oswald the Lucky Rabbit! Walt and his team created Oswald cartoon shorts for Universal Studios. Soon after Oswald’s success, Universal exercised its rights to keep Oswald and offered Walt lower wages to keep producing the shorts. He declined and created Mickey Mouse soon thereafter to compete with Universal Studios. In February of 2006, the Disney Company, which now owns ESPN, employed Al Michaels for sports broadcasting. Al had a desire to switch to NBC, which is owned by Universal. Contract negotiations included the trade of Oswald the Lucky Rabbit back to the Disney Company. Nearly 80 years after his creation, Oswald came back home to Disney. Many Disney fans are still celebrating his return! You can often grab your photo with this lucky rabbit, which is just a bonus of our Buena Vista Street Disneyland secrets. 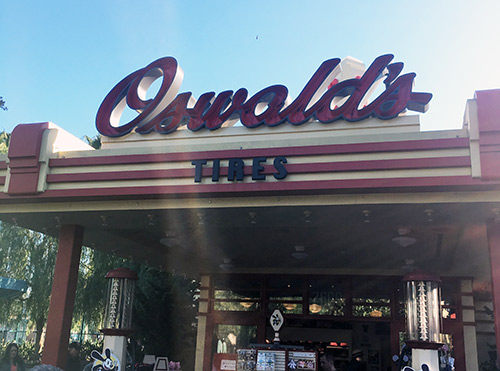 4. Mortimer’s Market: After losing the rights to Oswald the Lucky Rabbit, Walt and his wife Lillian were traveling across the county. Walt sketched a mouse and thought he might be able to create a cartoon success. He suggested the name Mortimer Mouse. Lillian did not like the name and thought that Mickey might be a more fitting option. Mortimer’s name was later used for another character that became Mickey’s arch nemesis as Minnie’s ex-boyfriend.
5. Buena Vista Street Mailboxes: The mailboxes on Buena Vista Street indicate that the residents living on the street are part of Disney history. Eddie Valient from ‘Who Framed Roger Rabbit,’ Theodore Ogelivie from ‘The Apple Dumpling Gang,’ and P. Peabody, the mechanic from ‘The Rocketeer’ all have mailboxes here. 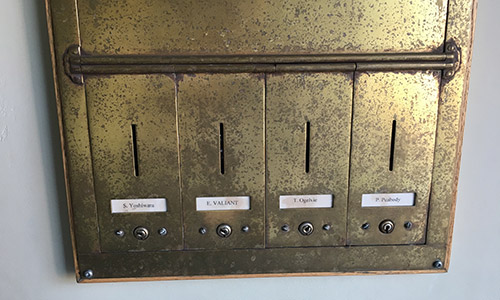 6. The Atwater School of Art and Animation: The Atwater area of Los Angeles was a favorite haunt of Walt Disney. Much of the early success at the Disney company was credited to nine different animators, called the “Nine Old Men.”  A sign on the Atwater Paint and Ink window recognizes their contributions. They are:
7. The Red Car Trolley: A Red Trolley system operated in Los Angeles until 1961 where many of the residents relied upon it to travel from town to town. Look for the street car numbers: #717, #623 and #23. Can you guess what they represent? Trolley 717 indicates the opening day of Disneyland on July 17. Number 623 represents the 600 series for the trolleys in Hollywood. And Trolley 23 pays homage to the year that the Disney Brother’s cartoon studio opened, 1923.
8. Carthay Circle Theatre: This was a movie palace in back early Hollywood. The theatre opened in 1926 and was home to many famous movie premieres including Gone with the Wind, Snow White and the Seven Dwarfs, Disney’s Fantasia and many other Hollywood movies. Similar to a Disney Castle, the Carthay Circle Theatre stands as a memorial to the birth of the feature length animated movies right on Buena Vista Street. Inside you can find a wonderful restaurant and club that features photos, awards and moments that have been a Disney / Pixar tradition. One of our favorite Buena Vista Street Disneyland secrets as to do with the restaurant here. Guests can get reservations for dining packages with premiere viewing areas to see the World of Color nighttime show or Frozen - LIVE at the Hyperion. Reservations can be made up to 60 days in advance, and we recommend making them early. 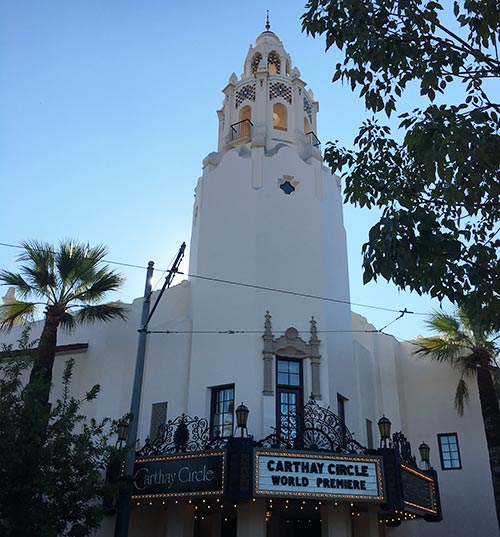 9. Residents of Buena Vista Street: These characters are always dressed in roarin’ 20’s and 30’s garb they are constantly ready for fun! Take some time to interact with these folks for a memorable experience. 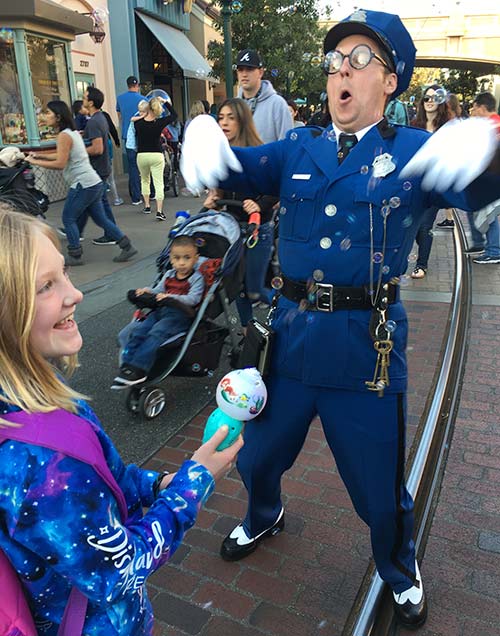 10. Fiddler, Fifer and Practical Café: The café features the famous Silver Lake Sisters. Disney fans know the “sisters” are fictional and pay homage to the ‘Three Little Pigs,’ one of Disney’s early animated successes. The real story is about Practical Pig, Fiddler Pig and Fifer Pig, three brothers who build their own houses with bricks, sticks and straw. Shortly before the Hollywood Tower Hotel permantaley closed its doors, the Silver Lake Sisters made their park debut and farewell by performing in its lobby.

11. The Windows: The glass on Buena Vista Street is home to a number of Buena Vista Street Disneyland secrets. The windows feature many amazing historical pieces, as well as facts about America, the Disney Company and the people who made Walt’s dream a reality. Here is a brief checklist of some of the things that you can see in the windows as you go back in time to 1920’s Los Angeles:
We hope you learned a little something new with our Buena Vista Street Disneyland Secrets. Buena Vista Street is a great way for all members of the family to learn where a dream started. And perhaps more importantly, how it was fostered and became a wonderful reality through tenacity, hard work, a few failures and perhaps a little bit of pixie dust.
Get Away Today can guide you to a creative vacation fit for every member of your family. We can help with everything from discount Disneyland tickets, the most affordable hotel acommodations, and even secrets to make your trip special. Book any of our Disneyland packages online or call our travel experts at 855-GET-AWAY. 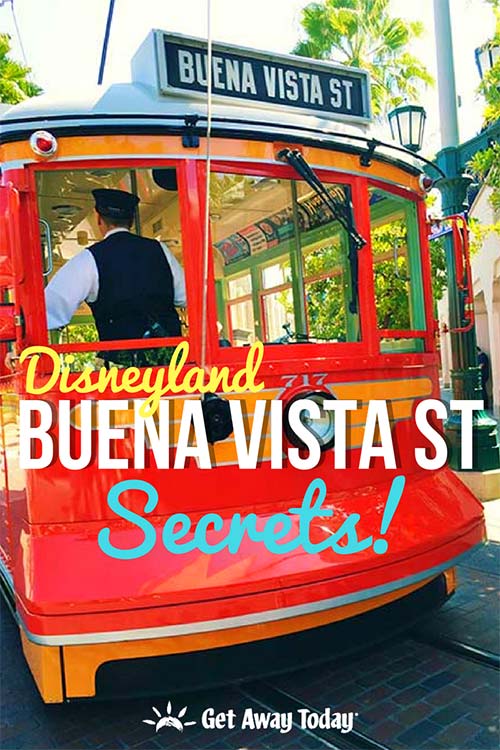