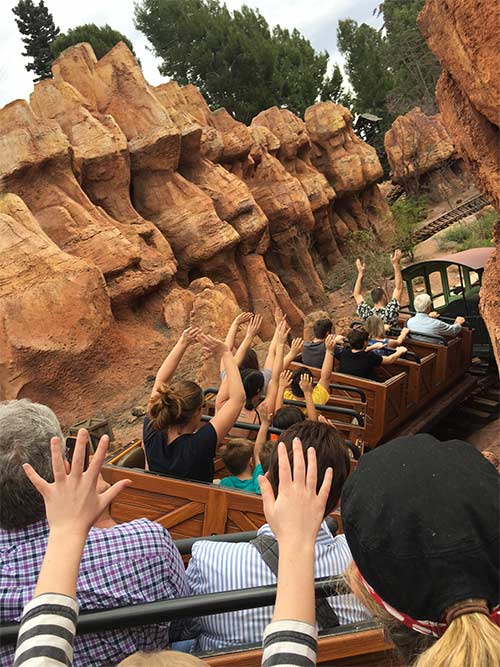 Big Thunder Mountain Railroad is located on the edge of Frontierland. It is a neighbor to Fantasyland and will soon be a neighbor to Star Wars Land. In fact, for now you can get a pretty great view of the progress of Star Wars Land while aboard Big Thunder Mountain. The attraction is a fun roller coaster type ride themed to be a run-away mine train on a cursed mountain with frequent unexplained explosions and earth quakes. No wonder its name is Big Thunder Mountain!
Legend reports that after gold was discovered in the 1850s, the Big Thunder Mining Company and the town of Rainbow Ridge boomed. Many miners and prospectors moved in to try their luck on becoming rich. Soon thereafter, strange things started to happen. Little did residents know that the area was cursed. Equipment failed and trains would take off without a driver! Rainbow Ridge residents started moving out and even today ghosts play tricks on those that dare to brave Big Thunder Mountain! 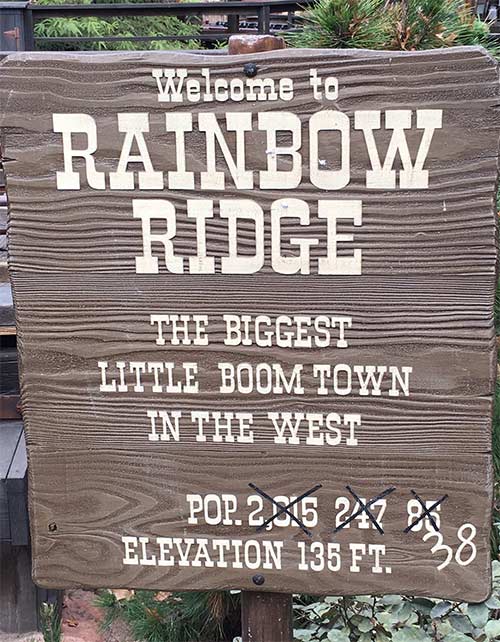 With new additions recently added to the attraction, Big Thunder Mountain is as fun as ever! It is indeed the wildest ride in the wilderness!

1. Bryce Canyon, Utah: Big Thunder Mountain Railroad is inspired by Bryce Canyon in Utah. The large rock spires called Hoodoos make up the look and of the mountain. Tony Baxter, the ride’s designer, wanted the attraction to look like the mountain was there first, before tracks were added.  Many theme park rides are built and then themed afterwards. In Disney fashion, theme is king and Big Thunder Mountain is recognized world-wide as one of the best themed attractions. 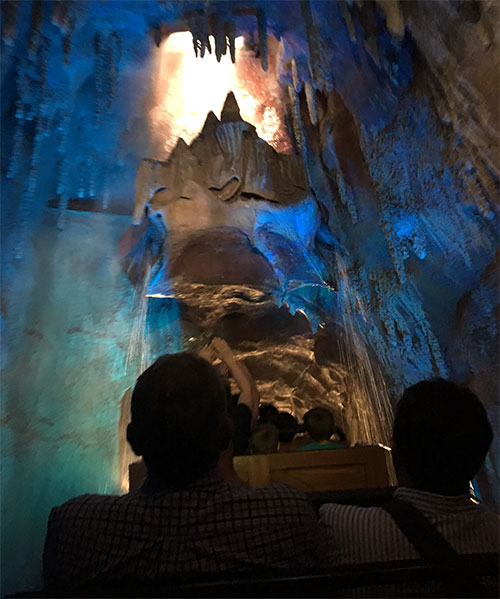 2. Remnants of previous attractions: The location of Big Thunder Mountain used to house a Walt Disney original – Mine Train Through Nature’s Wonderland. Rather than a crazy fast train, the journey was a leisure ride that allowed guests to see the old west. Walt Disney loved the red rock of the American West. The miniature town of Rainbow Ridge actually was part of the Rainbow Caverns Mine Train. The Caverns featuring stalactites and dripping water at the beginning of the ride are also remnants of the attraction. Watch the water drip and make rainbow colored splashes below. Also, be careful because bats are flying about in the cavern. 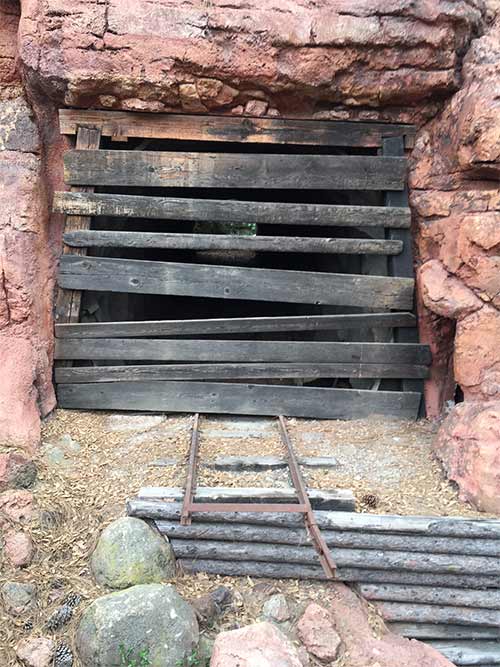 Tunnels and former tracks from Journey Through Nature’s Wonderland and the Rainbow Cavern’s Mine Train can be seen. In November of 1953, Walt Disney released a movie called the Living Desert, it won an Academy Award and scenes from the movie were recreated on past attractions. Disneyland Imagineers often leave reminders of past attractions as a way to remember the history of Disneyland. The tunnels remain but the attractions are long gone. Look closely in the water near the exit to Big Thunder Mountain, animatronic fish can still be seen in the water. Once referred to as “Bear River” animatronic black bears tried to catch the fish. The bears have moved away to a better climate, but the fish are still splashing away. Disneyland has such a rich history and it is fun to find old remnants.
3. Coyotes, skunks, and rattlesnakes, oh my!: Many of the animatronic animals were relocated from Rainbow Caverns and Journey through Nature’s Wonderland attractions and can still be seen in the attraction. Be on the look out for opossums, rattle snakes, coyotes, skunks, and other critters.
4. The dynamite goat: The mountain’s fan favorite resident “the dynamite goat” is found on the back-side of the attraction. The goat is so popular that he has his own Facebook Page as a public figure!  Many claim if you watch the goat as you speed around the corner it gives riders a strange sensation that keeps many coming back for more. 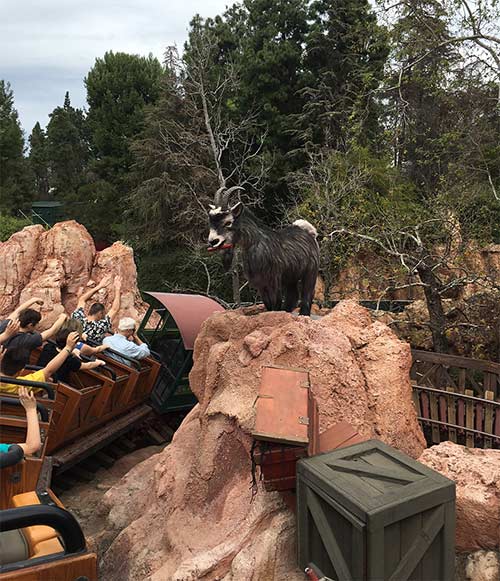 5. Red lights mean danger: Big Thunder Mountain gets its name from the frequent earth quakes and cave-ins. Upon entering the large mine on the mountain, your train tries to outrun dynamite fuses lit by unseen specters only to find that the explosion wins. Imagineers recently added a dynamite blast in the main cavern that blows theatrical smoke over the entire train’s riders. The newly added features bring some additional fun to the classic attraction. 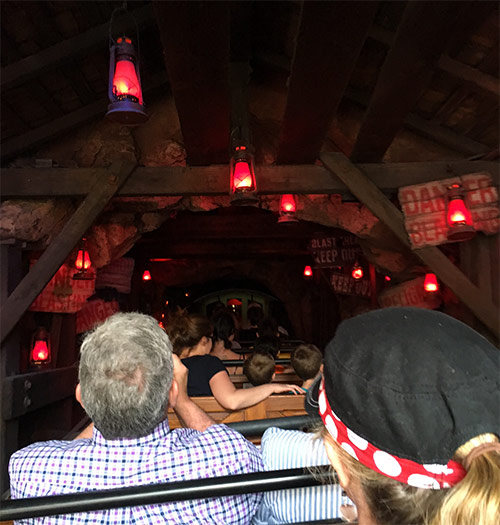 6. The history: Walt Disney was working on Disney World when he passed away. The Florida park was planned to be very different from Disneyland in California. Rather than a Pirates of the Caribbean attraction, a western land was planned. After Walt’s death, his brother Roy decided to keep with the popular Pirates attraction theme proven in Disneyland and the western town was abandoned. Tony Baxter, the ride’s designer, proposed that a portion of the plans be added to the parks and the idea of Big Thunder Mountain was born! Disneyland’s Big Thunder Mountain opened to the public on September 2, 1979. 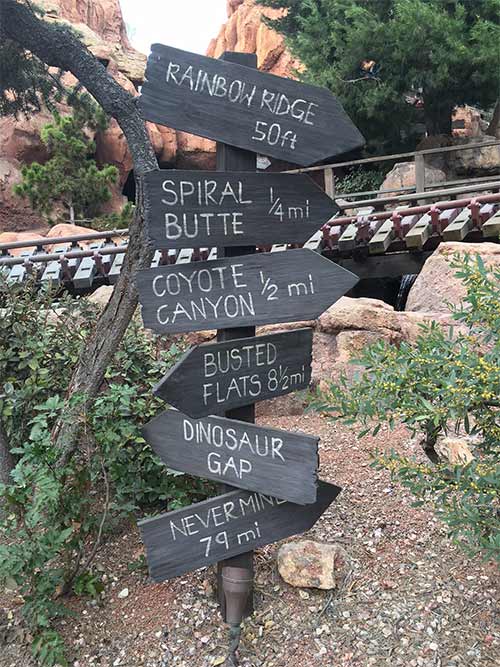 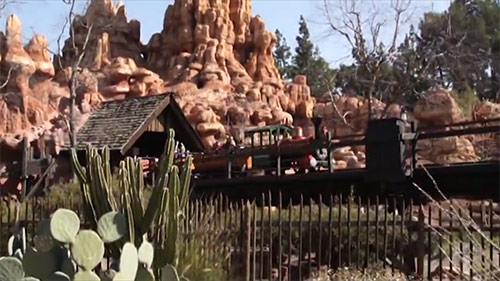 8. Sounds effects: Listen for sound effects throughout the attraction, you can hear coyotes howl, the steam whistle on the trains (even though the locomotives have no whistles). Some former residents claim that party in the Rainbow Ridge Saloon is held by ghosts once a day. 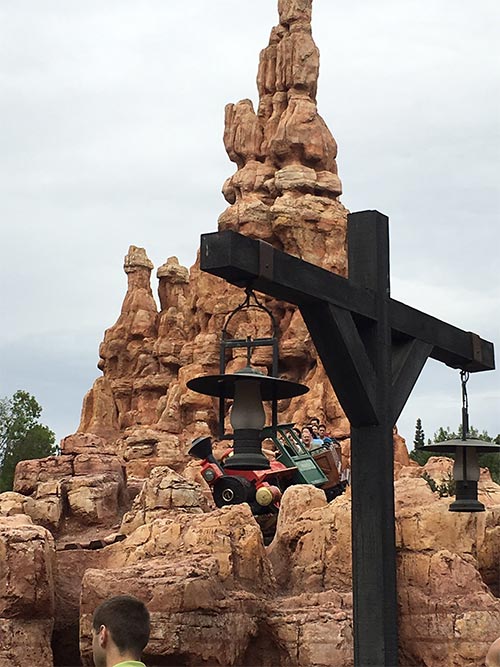 9. Walk and ride through mining history: Upon entering Big Thunder Mountain, the queue lines create a western trail that winds through walls created by over 100 tons of gold ore from a gold mine in Rosamond, California. Antiques from the mining days including waterwheels, a mine sluice, and dinosaur fossils are all part of the Big Thunder Mountain experience. How many different things can you find? 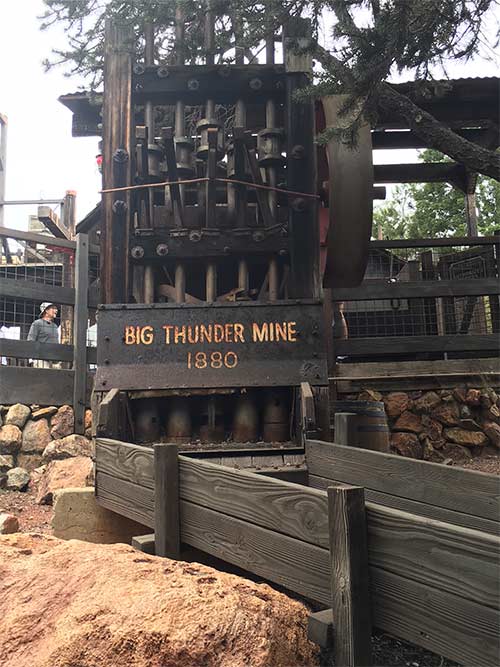 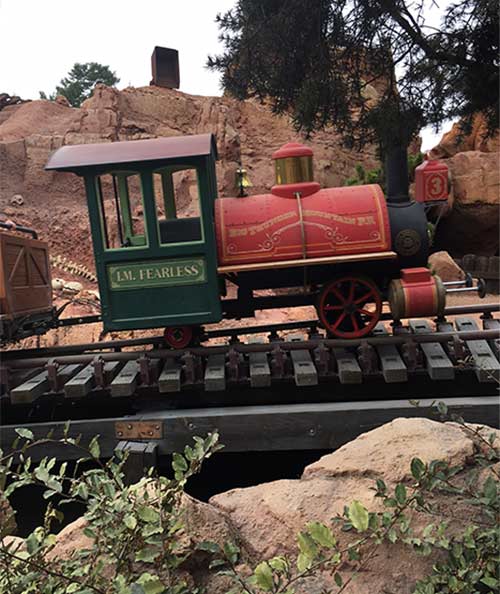 11. Ride Big Thunder at Night: Big Thunder Mountain Railroad is a totally different experience at night. You can see the fuses on the dynamite, the rainbow caverns, and other surprises in a different way at night. As the train speeds through the twists and turns of the mountain the darkness adds an additional thrill.
12. The wildest seat for the wildest ride: For a smoother ride, sit in the front, for a crazier ride sit in the back. But then again, those sitting in the front get the full force of the dynamite explosion in the front of the ride. Ride Big Thunder several times and sit in different spots for a different experience!  Don’t forget that Big Thunder Mountain offers Fastpass service and by scheduling your ride time you can go right to the front of the line! 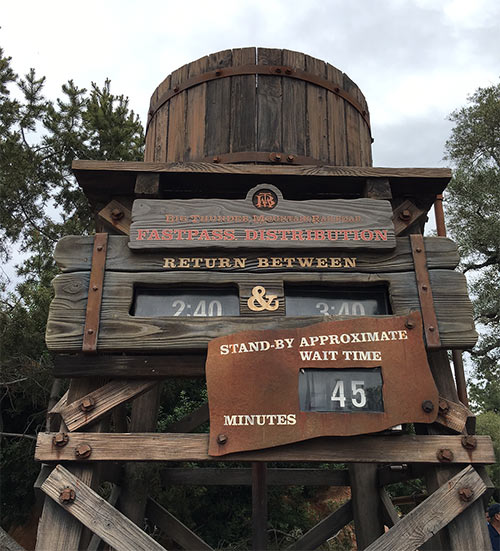 Take your family on a wild ride to the Disneyland Resort!  Get Away Today can help you create the perfect getaway for your family with everything from discount park tickets, a list of secrets to make your trip special, and the most affordable and themed hotel accommodations. Check out our Disneyland packages online or call Get Away Today's experts for your free quote today at 855-GET-AWAY.

Check out these other great articles:
10 Things You Didn't Know About the Matterhorn at Disneyland
Top 10 Secrets of Space Mountain at Disneyland
20 Scary Facts about the Haunted Mansion 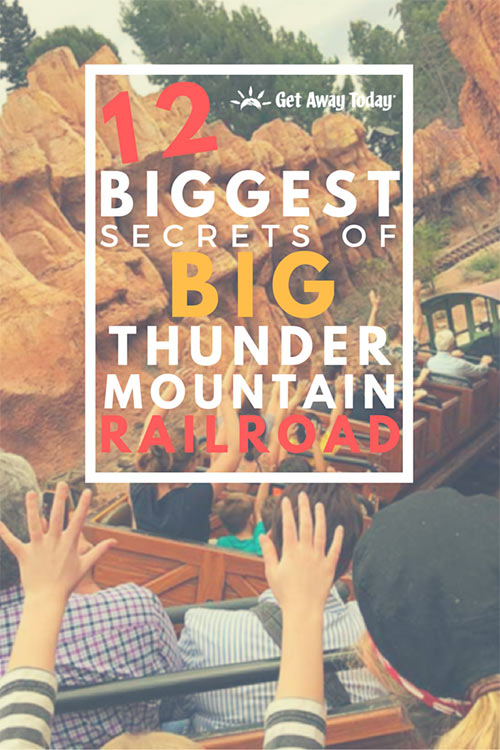 Reese- So glad you enjoyed it! Let us know if you have a favorite part of Big Thunder Mountain Railroad.

I really thought it was a fun and cool ride