UPDATED MARCH 2019 These DIY Chewbacca Cupcakes are the best in the galaxy. They are the perfect treat for a Star Wars birthday party or substance for a Star Wars movie marathon. 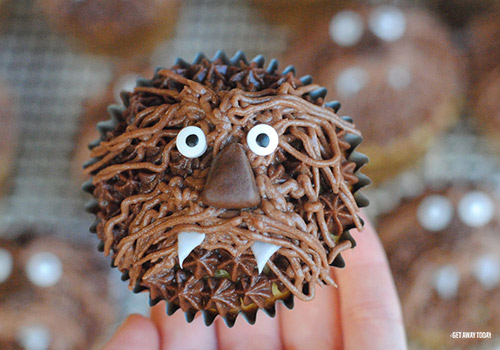 Star Wars is gaining popularity with a whole new generation of fans. When Disney purchased the Star Wars franchise a few years ago, they worked their special Disney magic to bring new life and excitement into the classic characters and films. The love for Star Wars is growing bigger all the time!
Examples of the growing Star Wars craze include new movie releases, adorable character merchandise, interactive Star Wars experiences at the Disney Parks and construction of an entire Star Wars Land Disneyland and Disney's Hollywood Studios, which opens May 31, 2019. It is almost impossible not to hear about droids, TIE-Fighters, Jedis and the Force on a daily basis.
My kids are in love with Chewbacca at the moment. He is the man at our house. My little boy even wanted a Chewbacca themed birthday party! He asked for a Chewbacca Tsum Tsum for his gift and requested DIY Chewbacca Cupcakes for his birthday treat. A quick trip to the Disney Store got the gift covered, but the Chewbacca Cupcakes took a little bit of creativity. They were a hit at the birthday party! I got the best hug in the galaxy and I hope your crew will enjoy them just as much. 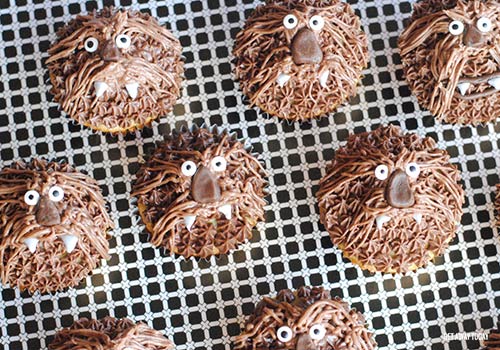 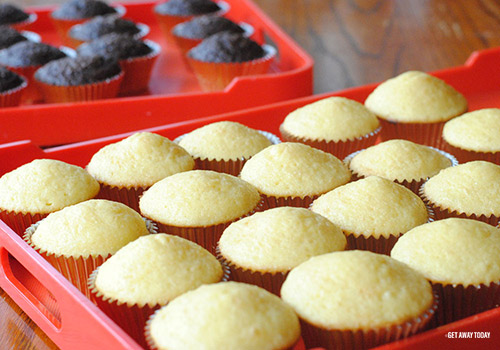 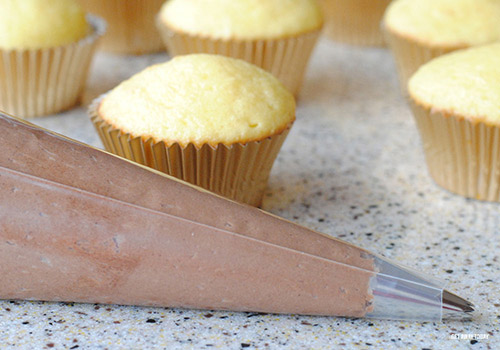 You are going to frost each cupcake with the open star tip first. This tip gives your DIY Chewbacca Cupcakes their furry bodies. Start along the outside edge. Pipe a small dot of frosting onto the cake and then pull it up away from the cupcake as you release the pressure on the bag. That gives the frosting a pointed tip. Continue working around the cupcake and then in towards the center until the entire top is covered in frosting. Repeat this step to frost all of the cupcakes. 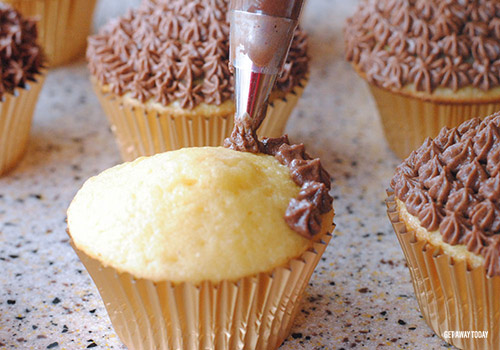 Next, add the eyebrow hair and beard using the grass tip. Chewbacca has some wild hair that can be hard to frost. That and his voice are probably why he is an absolute favorite around my house! I tried several different versions of this cupcake before I decided it looked enough like Chewbacca to be recognizable, but was still cute.
Start just above the center of your Chewbacca cupcakes and draw the eyebrows. Arch them up and then angle out towards the edge of the cupcake. Do the same going the opposite direction for the second eyebrow. Then add a few short layers of "hairs" with the frosting following the same path, but stopping before you get to the outside of the cupcake.
Then, add the beard and mustache hair. Start in the center just below the eyebrow hair. Pull the frosting slightly out and then work it down towards the bottom of the cupcake. Repeat on the second side and add a few shorter layers like you did with the eyebrows. 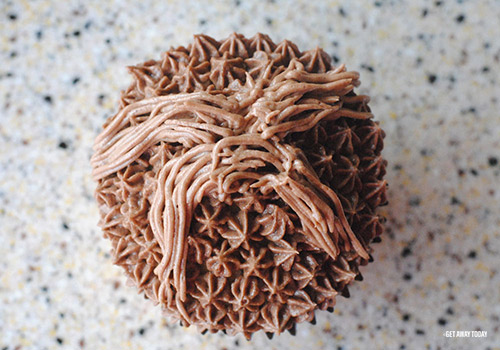 Now you get to build his face. I have never purchased fondant from the store before working on this project. I found it at the craft store, in little tupperware containers by the baking supplies. I got both brown and white fondant. You could use frosting or even tootsie rolls for these steps if you didn't want to bother with fondant. But, I wanted to give it a try!
Use the brown fondant or tootsie rolls to make the Chewbacca nose. I rolled the fondant into a ball and then shaped it into a rounded triangle. Place the nose onto the cupcake with the tip of the triangle pointing towards the top of the face. Smash it into the frosting to make it stick. 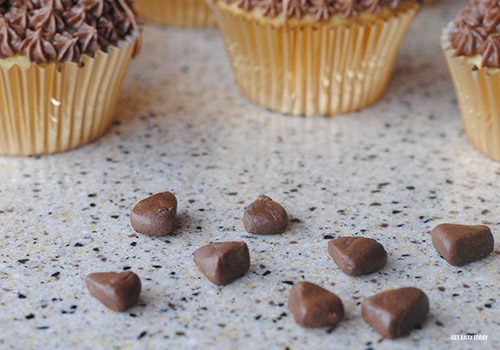 When all the noses are in place, add the eyes. I got little candy eyes from the craft store as well. Place the eyes onto the cupcake just outside of the tip of the nose. They stick very well in the frosting. 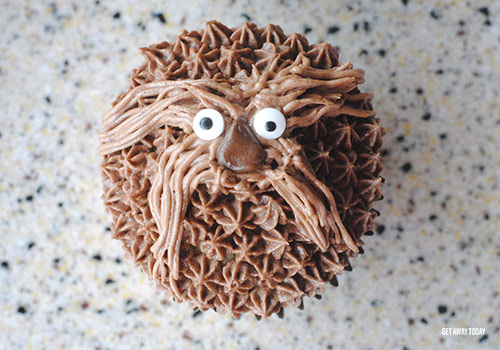 The last step is to add the teeth. Roll the white fondant onto the countertop. Then, slice it into little triangles with a butter knife. 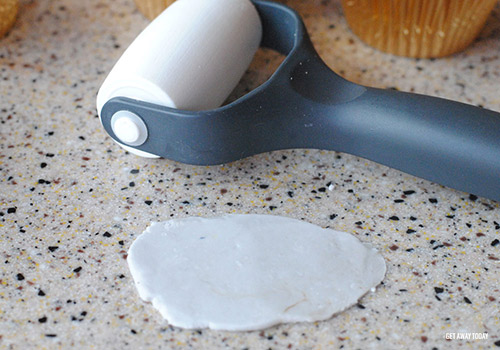 Add the little teeth to the Chewbacca cupcakes by sticking them into the frosting under the mustache. 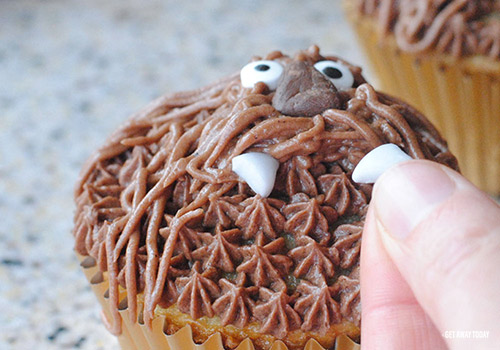 It is really quite easy to create these DIY Chewbacca Cupcakes. My little rebel fighters loved helping me frost them and they liked chewing on them even more! I hope you have fun making them as well. 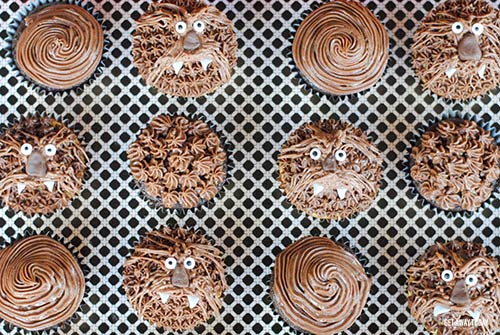 You can chew on even more galactic treats when you visit Season of the Force at Disneyland. Book your 2017 Disneyland vacation now to take advantage of our best deals! Browse all our Disneyland packages online or by giving our travel experts a call at 855-GET-AWAY. 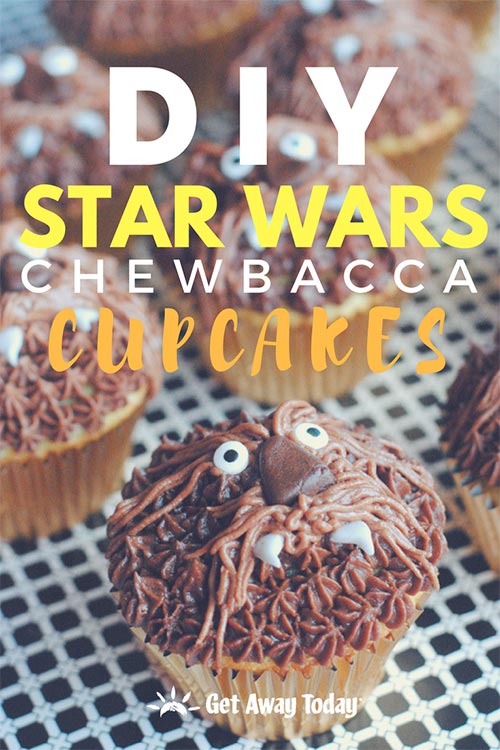