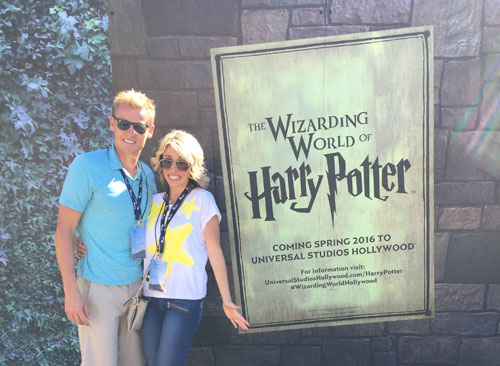 We figured that the best way to find out that you are going to visit Hogwarts would be to receive an official acceptance letter to the most famed school of Witchcraft and Wizardry. We decided to give the standard Hogwarts acceptance letter a fun vacation spin to announce a trip to Universal Studios Hollywood. You can easily print off as many copies of the official letter as you need, and then give one to each of the aspiring witches and wizards in your family for Christmas to announce your upcoming vacation! 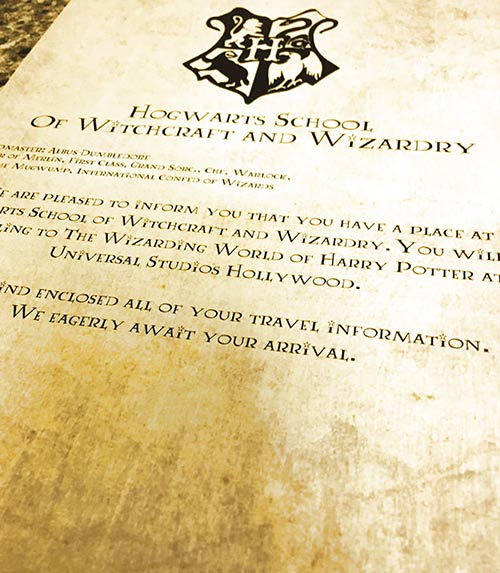 Also, since it's fun to have tickets, we created some tickets for the Hogwarts Express. Same thing... just print off as many tickets as your family will use. You can have your kids turn in their train tickets as they board the plane or load up in the family car to make the trek to The Wizarding World of Harry Potter. 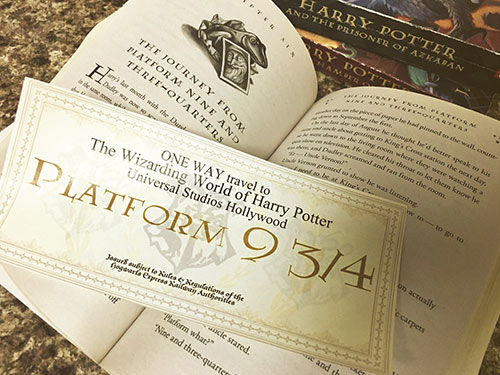 You can keep your Harry Potter vacation reveal as simple as folding the letter with or without the Hogwarts Express tickets inside, or you can make it extra fancy. Consider adding a real wax seal to the letter. Or, try rolling the letter into a scroll and attach it to a stuffed owl. You could even tuck the tickets into one of the Harry Potter books, or gift it with some small Harry Potter merchandise.The possibilities are endless. 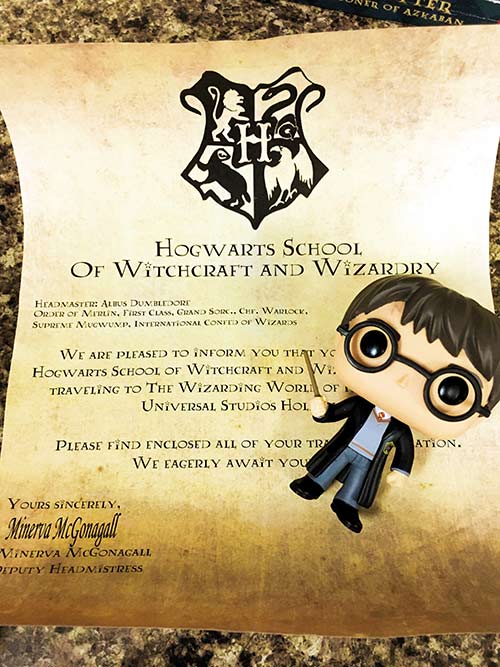 Here are some fun things you can use to make your Hogwarts Acceptance Letter a little extra magical:

Imagine the surprise and delight on your children's faces when they discover that they're going to experience the magic of The Wizarding World of Harry Potter in person! This is one gift that will be treasured forever. Keep the magic going until your vacation by re-reading the books, re-watching the movies, playing Harry Potter themed games, and making Harry Potter themed treats like butterbeer and chocolate frogs. 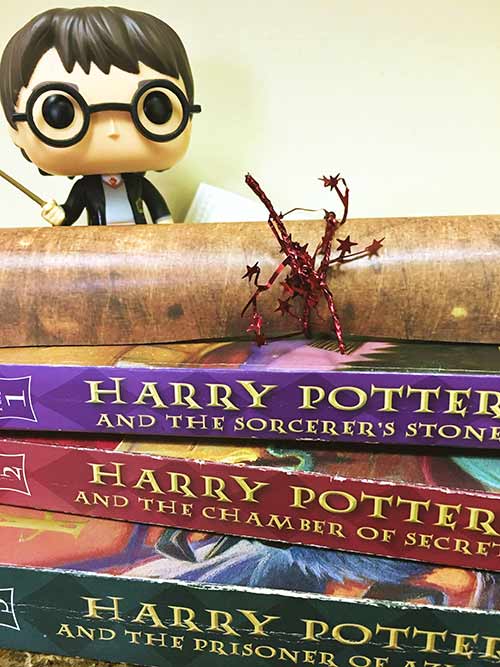 Make sure you are among the first muggles to experience The Wizarding World of Harry Potter and book your Southern California vacation today. You can stay nearby at one of the Universal Studios Hollywood area hotels, or less than an hour away near Anaheim and take advantage of our reduced rates and extra night free specials. Best yet, you can hold your vacation for just $125 down and lock-in your low price! Final payment isn't due until two weeks before travel. Book your Harry Potter vacation online or call any of our vacation wizards at 855-GET-AWAY. 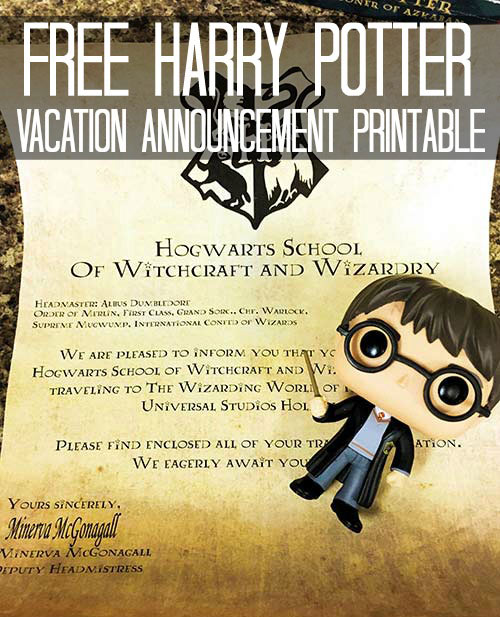 I so appreciate your offering this for free! My kids are going to be so excited when we surprise them Christmas Day with the news we are going to Universal and these announcements will add such a special element to this surprise! Thank you so much!

Thanks soo much for sharing this!! The tickets are sooo adorbs too!

Anonymous- You're welcome! Thanks so much for stopping by and checking out our Harry Potter printable.

Thank you for the printable! So excited!

This was great! Thank you for sharing this! It was a great way to announce a fun trip to our kids on Christmas morning. Thanks again!

Oh my gosh!! This is FANTASTIC!! You just made our announcement so much more fun...will be doing it Christmas Eve to our 13 year old and almost 7 year old boys...

Hi Kare-kare3! Yes, we do have a Universal Orlando version. You can find them in the article, below the Hollywood version. If you're having trouble with that, feel free to email atingey@getawaytoday.com and we'll get those emailed to you. Thank you! :)

Do you have a an invitation for Universal Orlando? I think this is a terrific idea for my 3 grandchildren. They are coming this month and I want to surprise them for a trip in January. They will be able to plan and anticipate. Thanks, what creative ideas you have.

Huge thanks for a great way to announce our trip to Universal Studios for my sons birthday. Files printed perfectly.

These are great, thank you for creating them.

Did have some difficulty finding the links on the page, maybe make them a bit easier to find?

These printable are PERFECT! Thank you for sharing!

Perfect! EXACTLY what I was looking for. Best Christmas Gift ever!

Thank you so much for creating and sharing these printable for free!!! It was so easy. I printed them on beige card stock and they look AMAZING! My daughter is going to LOVE this surprise!!

This is so great and saved me today! Thanks so much!!! Surprising my little girl for her birthday today and didn't know how or what to do.

Hi everyone! Diane, you'll want to click on the "Front" or "Back" options shown after the description of the printable. That will open the link to download and print. Jenna, Justin, and Missy - we are working on getting that ticket available with the Orlando wording available. Since the ticket is an older file it is having some trouble exporting to the new system. We are hoping to have it up within the next week and thank you for your patience!

How do you get the link to print it off. Thank you.

How do we get the printable to say Orlando instead of Hollywood?

Thank you so much for the free printables, do you happen to have an Orlando version of the train ticket? Both of them you linked to say Hollywood.

These are fantastic! What a great way to reveal and let the magic of it all start before even arriving! THANK YOU for sharing!!

These look amazing! I'd also love the Hogwarts Express ticket for the Orlando location.

Thank you so much. I just opened these in PS and add their names, I cannot wait for them to get these on Xmas!

Thank You so very much!! I will not forget your generosity!

Is there a ticket that says orlando? I couldnt find it. These are Great!

Great! Am in need of an Orlando based invite like this also! Thanks so much! So creative!

Hi everyone! We are working on getting the Orlando version finished and should have it up tomorrow, so keep your eyes out. Thank you!

I still don't see an Orlando version of the acceptance letter, but there is one of the map. Might have to change Santa's "reveal" plans.

I would love an Orlando version also! We are going in January. Thank you!

Has the Orlando version been made yet?

Is there an Orlando version of this? This is darling! I love it!

Would LOVE an Orlando version! Soon??? Thank you, thank you!

This is exactly what I need for a fantastic Christmas surprise for my son and nephew! Thank you for sharing!

I also would be interested in Orlando! Soon please??

Hi Buffalo Mom! We will be adding an Orlando addition to this soon and will make sure to let you know when we do.

Love this! Santa is bringing a Universal Orlando trip this year and is in desperate need of a letter to Orlando for a Christmas morning surprise! Can you help?

Do you have a vacation announcement for Orlando? We are surprising our daughter with a Universal Studios vacation this January.

Hi, I love your ideas! I have tried to print the letter but it comes up blank and only shows the back side, no front side with the words. Not sure what is happening, any suggestions?? Thank you

I would also love a version for Orlando! We are telling our kids in a week, so soon would be great! :)

Didn't see a response for Orlando. Any chance these exist?

Any chance you have these (including the Map) for Orlando?!

Can this be changed to say Orlando? I'm taking my kids to Universal Orlando and would like to use this.....

Do you have a printable Hogwart letter for Universal Studios in Orlando?

Any way to change the name to Universal Studios Florida?

It's been working for us. You could try switching browsers to see if that helps. Also, be sure you're printing both the "front" and "back." The "back" will look like a blank textured piece of paper. Best of luck!

The printable is just blank when I click on the link. Any suggestions?