Are you curious what Hogwarts House you belong in? Don't be! Use our Harry Potter Origami Sorting Hat to find out! This free, fun game will enchant the little wizards and muggles in your life.

One of my favorite scenes from the Harry Potter books is when Harry gets sorted into his Hogwarts House by the Sorting Hat. You can feel Harry's extreme relief when he gets placed into Gryffindor! Anything but Slytherin right?! Have you ever wondered what house you belong to? Now, you can find out with this Harry Potter Origami Sorting Hat game! Just like the real Sorting Hat, the results are never wrong. Well, almost never.

With the Wizarding World of Harry Potter at Universal Studios Hollywood, you can get your family members sorted before your visit to Hogwarts Castle. Are you brave and bold like a Gryffindor, trustworthy and loyal like a Hufflepuff, clever and wise like a Ravenclaw, or cunning and ambitious like a Slytherin? The only way to find out is to ask the Sorting Hat. Or, in this case, the Harry Potter Origami Sorting Hat.

This is one of our most popular printables ever! We've seen this used for class parties, Halloween fun at home, and birthdays. We're so glad that all you wizards, witches and muggles out there have enjoyed it.
To start, print the Harry Potter Origami Sorting Hat template here.
Stock up on printer paper HERE.
Purchase a paper cutter HERE.
Need some crafting scissors? Buy some HERE. 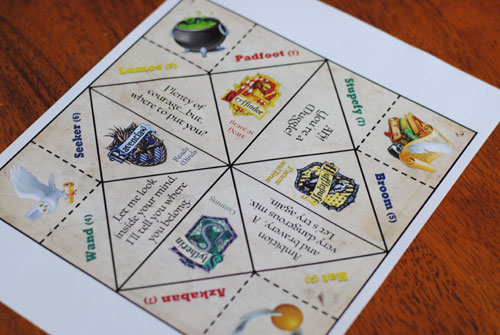 Cut off the white edges, so you have just the square pattern. With the pattern facing down and the blank paper showing, fold the corners into the center. Make sure to watch the lines and make it even. 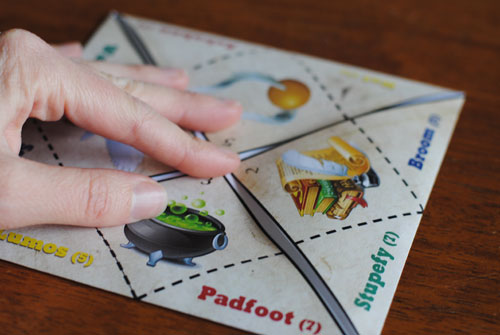 Fold the corners into the center again to make a smaller square. Crease the edges. 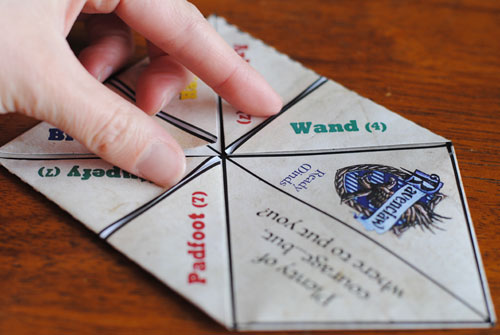 Next, fold the square in half one way. Make a crease. Unfold it. Then, fold it the opposite direction and make another crease. 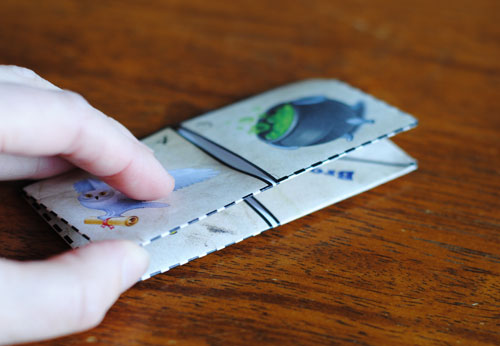 Then, place your fingers into the bottom of the paper and pop it up to make four little teepees. The "Hat" is ready to start sorting! It is easy to play. Hold the Harry Potter Origami Sorting Hat with two hands. Place your thumb and pointer fingers inside the little teepees. Let the person who is being sorted choose one of the images on the top. Either the cauldron, books, snitch or owl. 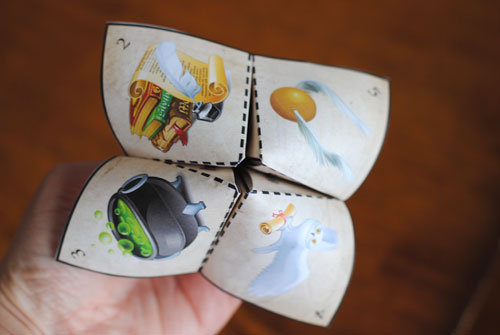 Playing with Your Sorting Hat

Each picture has a number associated with it. Open and close the Harry Potter Origami Sorting Hat alternating between up and then across with your fingers. For example, if the player chooses the bubbling cauldron, you will make three movements. If the owl was chosen, you make four. Leave the Sorting Hat open on the last count. 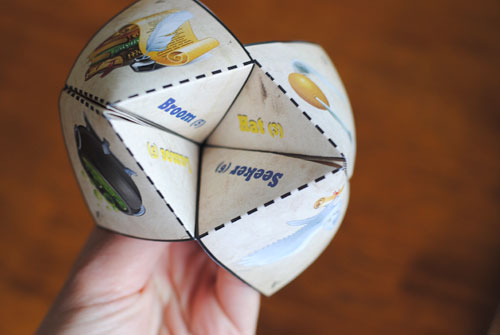 Then, the player will choose one of the words on the inside. The words are written in blue, yellow, red and green. Move the Harry Potter Origami Sorting Hat as many times as there are letters in the word chosen. The number placed next to the word tells you how many letters are in the word. That way, even those little wizards who aren't great at spelling can still play! Not all of us are Ravenclaws.

On the fourth word selection, instead of counting out the word, open the flap and read the directions underneath. Four of the words hold a Hogwarts House icon under them. If you get one of these, then you have been officially sorted into a house. Hooray! The other four slots are filled with directions on how to start again. Or, if you are really unlucky, you find out that you are not a wizard at all, but a Muggle! Oh no. 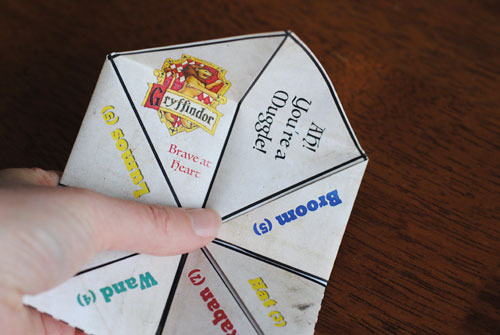 Keep playing until everyone has been sorted into a house with the Harry Potter Origami Sorting Hat.

I hope this little game helps your family get excited about visiting the amazing Wizarding World of Harry Potter coming to Universal Studios Hollywood. Experience the magic of Hogwarts and Hogsmead like never before and get the very best deal when you book your tickets with Get Away Today. Book your Wizarding World of Harry Potter package online or call our travel experts at 855-GET-AWAY. 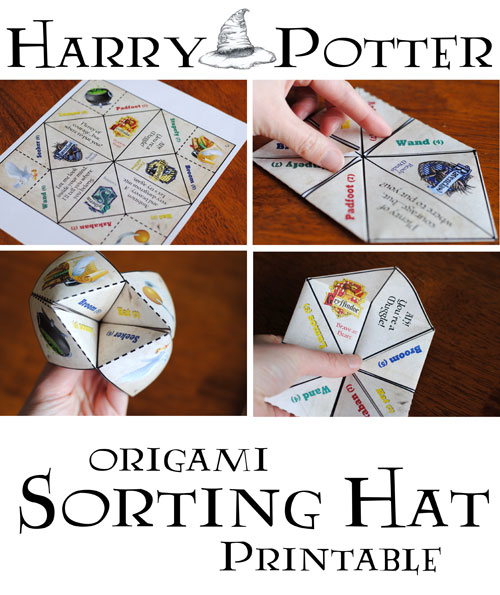 This is wonderful. Thank you.

This Was Such A Good Idea, Great Grandchildren Loved It!

It was SOOOOOOO fun

Lucinda - We're so glad you love it. Thanks so much for stopping by our blog. Happy Halloween!

What a great printable! Thanks for sharing!

Thank you for this great idea for my grandchildren's party. They loved it

This is awesome, thank you so much for sharing :)

Hi Tara! The PDF link is working on our end, so you may want to try a different browser. You can also copy this link https://www.getawaytoday.com/files/326/26338/sortinghat.pdf into your address bar to see if that works. Please keep us updated!

Hello- The link to the PDF printable is not working - says "PAGE NOT FOUND". Can you help? I would love to use this for an event. Thank you!

Hi Misty! You can download the paper here: https://www.getawaytoday.com/files/326/26338/sortinghat.pdf. The link is also within the article, above the second picture, if you'd like to just click there instead of copying and pasting the link. Please let us know if you have any other questions!

How do you get the paper?

thanks I got sorted into gryffindor

Hi there! As long as you are not selling these, you don't need copyright permission to print them. We hope the kids love them and that the symphony is amazing! :)

Do I need copyright permission to print this? We'd like to print about 30 to hand out to kids at a symphony.

Hi Hermione! You can print the PDF from this link: https://www.getawaytoday.com/files/326/26338/sortinghat.pdf. You can also find the link in the article in the fourth paragraph. Please let us know if you have any other questions!

How am I supposed to print this?

This is great! Going to be fantastic for my Harry Potter Themed Graduation Party! Thanks so much!!

Hi there! You'll take the folded paper and insert your fingers into the opening, pushing as you do so. This will cause the paper to pop up and make the "teepees" for the origami Sorting Hat. Please let us know if you have any other questions! :)

Excuse me,but where do you make the 'teepees'?,unfortunately I cannot find out how to do this

thanks, it is so cool

Hi Veronica! The link to the PDF download is above the second picture. In case you're still having troubles finding it, you can copy and paste this address in your search bar to bring the download up: https://www.getawaytoday.com/files/326/26338/sortinghat.pdf. Please let us know if you have any questions and we hope your daughter's birthday party goes amazing! :)

This looks perfect for my daughter's Harry Potter themed birthday party that I am planning but unfortunately I cannot find the pdf download icon. I have spent 10 minutes trying to find it - am I daft or something?

how do you print

It not really clear when I print it out

Hi Hippiechic! You will simply click where the PDF is linked and it will open the PDF in a new tab. Once that is open, you can print from there or choose to save to your computer and print at a later date. If you have any other questions, don't hesitate to let us know!

Thank you - this is awesome!!

Thank you so much !! My son loves Harry Potter .

Hi Katerina! The front pictures feature an owl, pot, stack of books and snitch. Please let us know if you have any other questions! :)

Hi! I can not speak english very well... can you please tell me the names of the front pictures? (I mean owl,pot and other two)... Thanks

Hi Kiki! The PDF seems to be working on our end. Have you tried using a different browser and making sure pop-ups are enabled?

Hi Camryn! Once you download the file, you can use the print option within the Adobe PDF file or use Control-P on a PC or Command-P on an Apple. Enjoy! :)

How do I print it?

So cute! I just printed it out for one of my Harry Potter fan students.

its so cool ha

Thanks so much this was so much fun to do with my kiddos!

Hi Anonymous, once you download the file, you should be able to hit Control-P to print on a PC or Command-P on an Apple. Enjoy! :)

Thanks I'm a huge potter_head, I've read all the book and seen all it part two of the last movie!!!! Thanks for this great idea!!!

Would be great to have the instructions on one paper to take with to library activities, etc. Just a suggestion.....

Thank you so much!!

You should be able to download the template from the link in the article and print it on a regular piece of office paper. If it doesn't work, try switching browsers. Best of luck!

How can I get the paper to print

Thanks! Now all the Potterheads in my school can enjoy this with me!!!!

Thanks for this ~ using it to sort bridal shower guests into their "houses" for seating at the 4 long banquet tables. Nice ice breaker!

This is great!! It really works!!

Awesome. I just to play a game like when i was a child. But this one is 100 times better!!

Thanks a huge harry potter fan

Hi Elizabeth, You can download the printable in the article onto your regular printer paper, then follow the folding instructions. :) Enjoy!

How do you get the origami paper???

Thank you for posting this! While we are excited for the new HP opening, this is going to be used for a HP bday party. Something to keep the kids busy until everyone shows up.

Hi Sydney, You can download the pdf in the article and just print it onto regular printer paper. Enjoy!

How do you get the paper for the oragomi