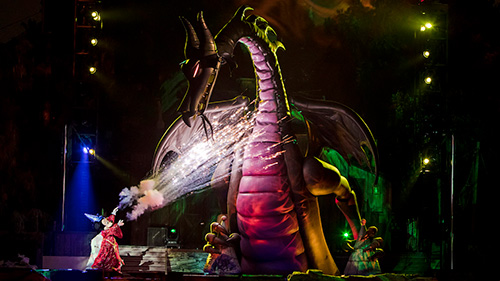 Did you know that Disneyland turned 62 on July 17th? It’s amazing to think about all the magical memories that have been created at the Happiest Place on Earth in that time! Such a milestone deserves a big celebration and Disney did just that by re-opening the iconic Fantasmic! show. The new Fantasmic! at Disneyland now features different scenes, vocals and technology. If you loved the show before, you’ll be absolutely amazed by the updated version.

Many people have wondered how the show would change from the moment the refurbishment began in January of 2016. Luckily, we were able to view the new Fantasmic! at Disneyland before it premiered and again on opening night. We wanted to share with you not only how beautiful the show is, but the biggest differences between the old and new shows.

Differences between the old and new Fantasmic! at Disneyland:

Enhanced lighting and water technology. The new Fantasmic! at Disneyland has upped its game when it comes to the lighting and waterworks department. Before, only a few colorful lights and one or two water fountains were showcased during the nighttime entertainment. Now, you’ll feel like you’re watching something akin to World of Color. The new Fantasmic! spectacular has become a true masterpiece, with an amazing amount of thought put into the lights and water that supplement it.

New vocals. This one may be harder to notice, but the vocals of Fantasmic! have changed. While it is not as noticeable as the other differences, the richer audio added rather than took away from the show.

Larger than life projections. Not only will you witness bigger and better lights and waterworks; every projection has also been updated and enhanced. The new Fantasmic! at Disneyland will leave you breathless, with projections that could probably be seen from miles away. The entire island stage is now digitally mapped and the quality of the water screens has greatly improved. New projections have been added to the nighttime extravagant as well, adding an excitement like never before to the journey into Mickey’s imagination.

New scenes. Speaking of new projections, you’ll find some new friends in the Fantasmic! at Disneyland now. Scenes from The Lion King have been added to the beginning, with neon monkeys now dancing to the tune of “I Just Can’t Wait to Be King” as the giant 100-foot snake comes out. The Genie has also been added to the new Fantasmic! at Disneyland, with music and lighting to accompany the catchy “Friend Like Me” song. You’ll also notice new scenes from The Little Mermaid and Finding Nemo before the beloved Pinnochio scene, which has been shortened from the last show. Almost all of the other scenes have remained the same, but have been enhanced to be bigger and brighter than before. 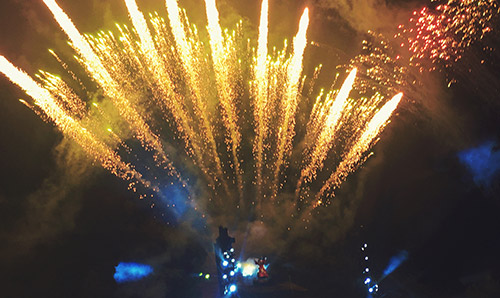 Different props and float characters. This may be the biggest change between the old and new Fantasmic! at Disneyland. The old show used to have a pirate ship sail through, with characters re-enacting a popular scene from Peter Pan. Now, the pirate ship features characters from the Pirates of the Caribbean, including Jack Sparrow and Elizabeth Swan. While the Peter Pan scene was beloved by many, the new theatrics and projections of the Pirates of the Caribbean scene were very well done.

Another large difference between the old and new Fantasmic! shows centers around the Disney princesses scene. You’ll be greeted by Aladdin and Jasmine flying on a magic carpet – a fantastic addition to the nighttime spectacular. As the princesses begin to arrive by float, you’ll also notice that Snow White and Prince Charming have been replaced by Rapunzel and Flynn Rider from Tangled. While some may miss the iconic royal couple, I couldn’t help but enjoy singing along to “See the Light” instead.

That’s it! Most of the show, including the breathtaking opening and ending scenes, has remained the same. New technology has simply enhanced the new Fantasmic! at Disneyland to be even more magical than before.

We love the new show and think Disney fans of all ages will agree! Have you seen it yet? Did you love it? Let us know below! 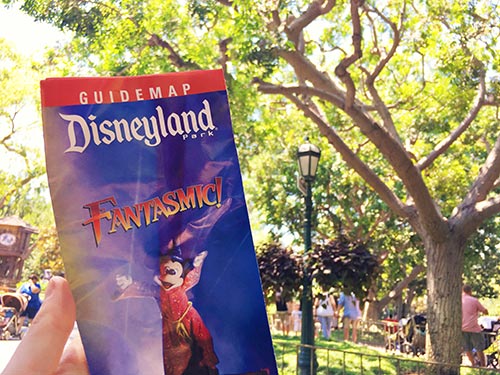 Don’t forget that our 2018 Disneyland packages are available to book now. Booking now rather than later means you can lock in both the best price and availability. Or, if you’re planning a holiday trip, we still have availability for the rest of 2017. Whether you’re visiting Disneyland this summer, this Halloween, next spring or next Christmas, we guarantee the best price and service on your vacation. Book online or give our agents a call at 855-GET-AWAY.

Check out these other great articles:
New Pixar Pier at Disneyland in 2018
Your Guide to the Changes Coming to Disneyland
Halloween changes at Disneyland 2017