You don't have to travel all the way to New Orleans to have an authentic Fat Tuesday celebration - the famed Gaslamp District in San Diego is hosting its 19th Annual Mardi Gras in the Gaslamp! We recently received the following Press Release with all of the information, and since we still have some great hotel rates available for San Diego next week, we thought we'd share it with you:

San Diego, CA, Gaslamp Quarter – The 19th Annual Mardi Gras in the Gaslamp unveils its entertainment line-up, debuting a refreshing blend of New Orleans’ rhythm and soul with its electrifying West Coast music flair. The Gaslamp Quarter will intrigue event goers as it creates a world of fantasy through this diverse music festival with its use of sounds and visuals across four stages on Fat Tuesday, February 12, 2013 from 5:00pm to 11:00pm.

Follow the mesmerizing beats of the samba drums and elaborately costumed dancers to the Brazilian Stage, on Island Avenue between 5th and 6th Avenues, to experience a glimpse into Rio de Janeiro, one of the world’s most celebrated carnivals. The Gaslamp Quarter will come alive with dancing lights and the echoes of drumming as Rio to Real takes the stage not once, but three times throughout the night creating an unforgettable experience of vibrant colors, hip-shaking dance moves and interlacing drums. This dynamic area will immerse guests in the Brazilian culture with performances by the Batukeaxe' Band, up-beat pop and reggae dance songs from the Ragabond Band and entrancing acrobatic moves, leg sweeps and flips by the Capoeira Brasil & Soccer Acrobats group.

Art and music collide at the Mardi Gras Stage, on J Street between 4th and 5th Avenues, as The Gator By the Bay Production Team brings the contagious energy of New Orleans to transform the streets into a world of lively music and illusions. The stage will be full of foot-tapping fun with sets by The Bayou Brothers, one of San Diego’s favorite Zydeco bands with their original Louisiana sounds and the bluegrass melodies from The Tail Draggers, named after their first gig in a hanger at Montgomery Field. Big notes will be hit as the Euphoria Brass Band shakes down the crowd with their unique nine-piece band known for its explosive horns section and San Diego's Queen of Boogie Woogie, Sue Palmer graces the stage and delights the audience with her sultry tracks. Closing out the stage will be Theo and the Zydeco Patrol strumming out those Cajun-style blues that will have you and your friends dancing the night away. 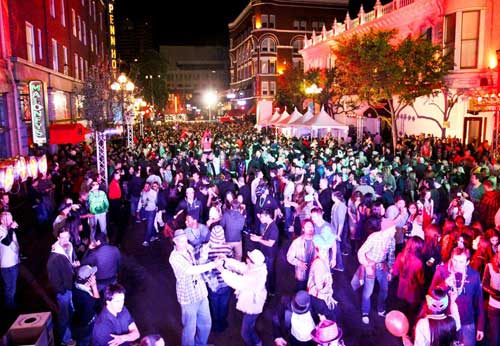 A storm of dirty blues will be brewing over the Gaslamp Quarter as the duo, Little Hurricane opens up the Festival Stage 5th Avenue between Island Avenue and J Street, a stage comprised of top talent individually selected by the music stylings of Belly Up Productions. Once a member of Lenny Kravitz’ band, Karl Denson’s Tiny Universe will consume your souls with its evolution of funky jazz and high-energy groove mixes. Headlining the Festival Stage will be Ozomatli, a Los Angeles-based and Grammy-winning band known for integrating several genres of music such as funk, hip-hop, rock and salsa all into one to create music that truly has something for everyone. In between band sets, San Diego’s own DJ Mikey Beats will be on the tables throwing down those favorite party-rockin’ dance hits.

Become a part of the Mardi Gras in Gaslamp as you and your friends join one of the interactive Mardi Gras processions parading down Fifth Avenue alongside brass bands, stilt walkers, belly dancers, samba drummers and street performers all leading towards the Technovale Stage, on 5th Avenue between K and L Streets, for what promises to be a killer collection of DJs. Kicking off this stage will be the energetic San Diego based DJ duo, DigitaLife who have been opening and closing for artists such as Afrojack, Sebastian Ingrosso, Alesso, Paul Oakenfold, Wolfgang Gartner and more. Next up, G*Roy & Jimmy Beats will keep those beads shaking by spinning all favorite house beats combined with live drumming to make this a set you will not forget. Taking over the turn tables after that will be Jesse Marco, at just 22 years of age this talented DJ fuses music from his parent’s generation with current rock, hip-hop, funk and soul. No stranger to playing large festivals such as the Coachella Valley Music and Arts Festival, The Gaslamp Killer stays true to his DJ roots of underground hip hop and is known for being on the forefront of LA's electronic music scene. Headliner Z-Trip, a pioneer of the mash-up movement, is both a DJ and producer that has traveled the world collaborating with celebrities and musicians spinning tracks ranging from rock to rap and winning over his fans with what is called the “Z-Trip Revolution.”

Tickets into this fantasy world of masks, illusions, entertainment and beads will be $40.00 in advance and $50.00 at the gates; attendees must be 21 years or older and have a valid photo ID to enter. Mardi Gras in the Gaslamp Dinner Packages are available for purchase at 20 establishments inside and outside of the event footprint.