Want to travel the world and beyond in just one day? Then look no further than the Happiest Place on Earth! In today's article we share the theming and geography of Disneyland so you can learn about what inspired many of the beloved rides and attractions at the Resort. 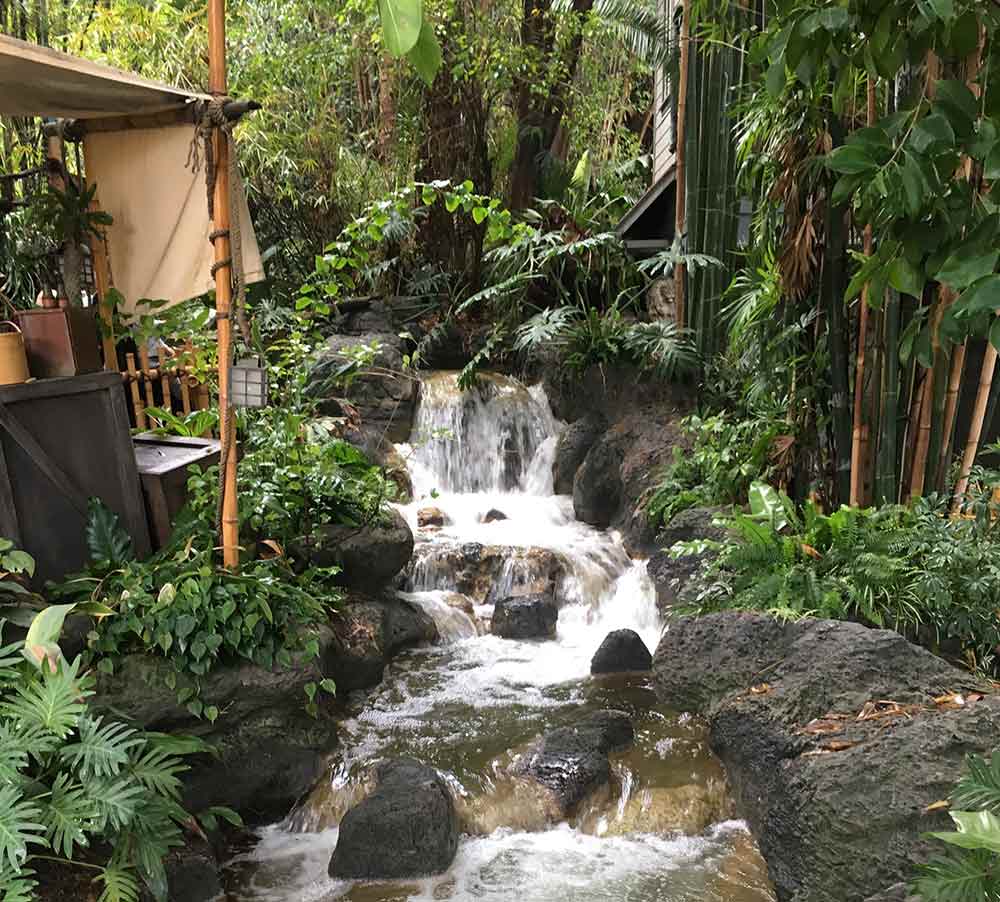 I was able to catch up with Rohde in a few places, including a speech in Orlando, an event at Disney’s Fan Club in Anaheim and a lucky encounter on Buena Vista Street in California Adventure Park. In all three cases, I took the opportunity to get to know the man who has been the driving force behind many of Disney’s contemporary successes and has caught the attention and respect of Disney fans everywhere. Admittedly, I don’t get star struck very often, but creative minds like Rohde's do leave me a bit inspired. I asked if I could take a quick picture and ask a few questions. He was very gracious and mentioned that “it’s fun to talk to people who 'get it.'" I was honored to think that I might “get it!” In every encounter with Rohde, we discussed themes. His advice is to think of themes in different ways.

According to Rohde, theme is not a verb but, rather, theme is the idea, the values and the essence of how a story is told. Every part of a story, including its environment, details, plants, and backdrop needs to contribute to the story, thus making theme the very thing that a guest experiences.

Geography of Disneyland - More on Theming

The idea of theme has been a driving force of Disney since Walt Disney started making films. That is why Disney was the first “theme park,” and not another “amusement park,” “midway” or “carnival.” A lot of forethought goes into ensuring that every visual, angle and detail of the Disneyland Resort always encompasses and supports the guests' experiences. In other words, when a guest encounters a land or attraction, they are transformed to another place and time.

Role of a Disney Guest

Disneyland is truly full of magic and the ability to transform guests to a different time or place, even galaxies far, far away. Disney provides an amazing immersive experience which can transform you and take you to the jungle, the wild wild west, your favorite animated adventure or the future. Become a kid again and be willing to immerse yourself in attractions and let your imagination carry you away to adventure like never before. When you do so, you're fulfilling Walt Disney’s aim to allow “age to re-live fond memories of the past” and to allow “youth to savor the challenge and promise of the future.”

Join as we explore some of the geography of Disneyland and the adventures that you can experience on your next vacation to the Happiest Place on Earth.

Geography of Disneyland - From America to Batuu

1901-1908 America: Imagine yourself as a young child visiting a city in the early 1900s.  America was experiencing the Industrial Revolution, complete with horseless carriages and the transition from gas lamps to electric lamps. Imagine experiencing it for the first time; look at the details, the sights, sounds and smells of a bustling new America. You will notice the sound of a steam locomotive and the whistle of a steam river boat, not to mention the clip-clop of horses carrying passengers down Main Street, U.S.A.. These details and more will transform you to one of the most exciting times in US history.

America’s Rivers: The Rivers of America in Disneyland represent major rivers from all four corners of the country. The plant life, soil, and wildlife of each geographic region change to represent the different parts of the country. The four rivers are the Mississippi River (America’s Midwest), the Columbia River (Pacific Northwest), the Potomac River (The East), and the Rio Grande River (Southwest). 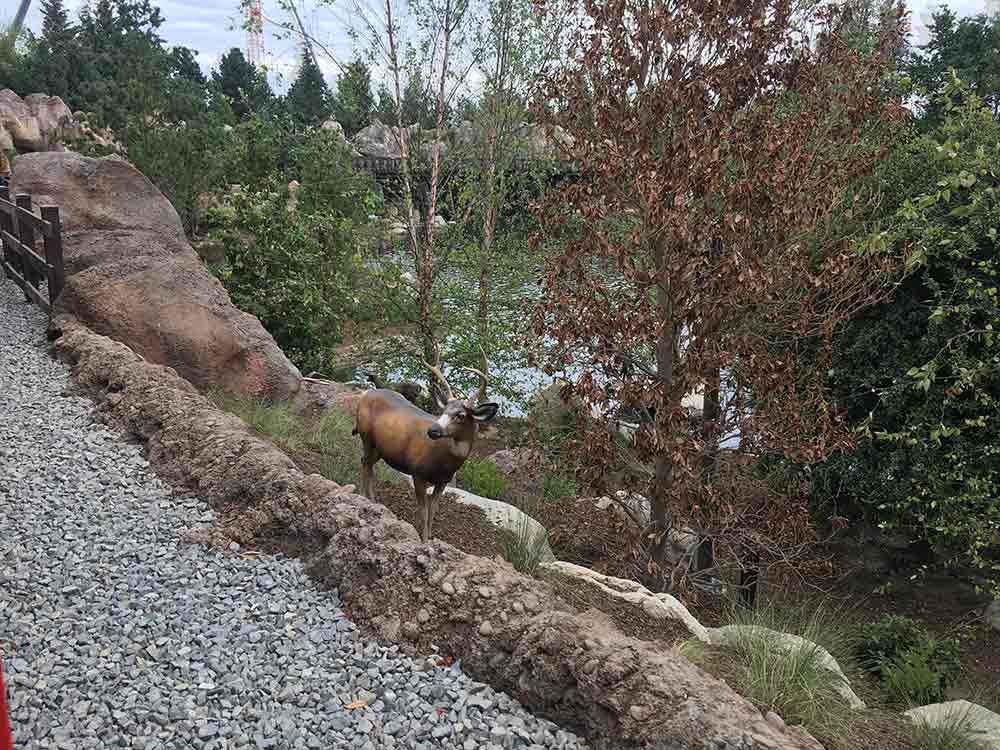 Black Spire Mountain Range: Located in a galaxy far, far away, the planet Batuu is home to Star Wars: Galaxy Edge, and captures the essence of living on another planet. Look for the details, including the citizens in traditional Batuu apparel and the out-of-this-world food and drink. 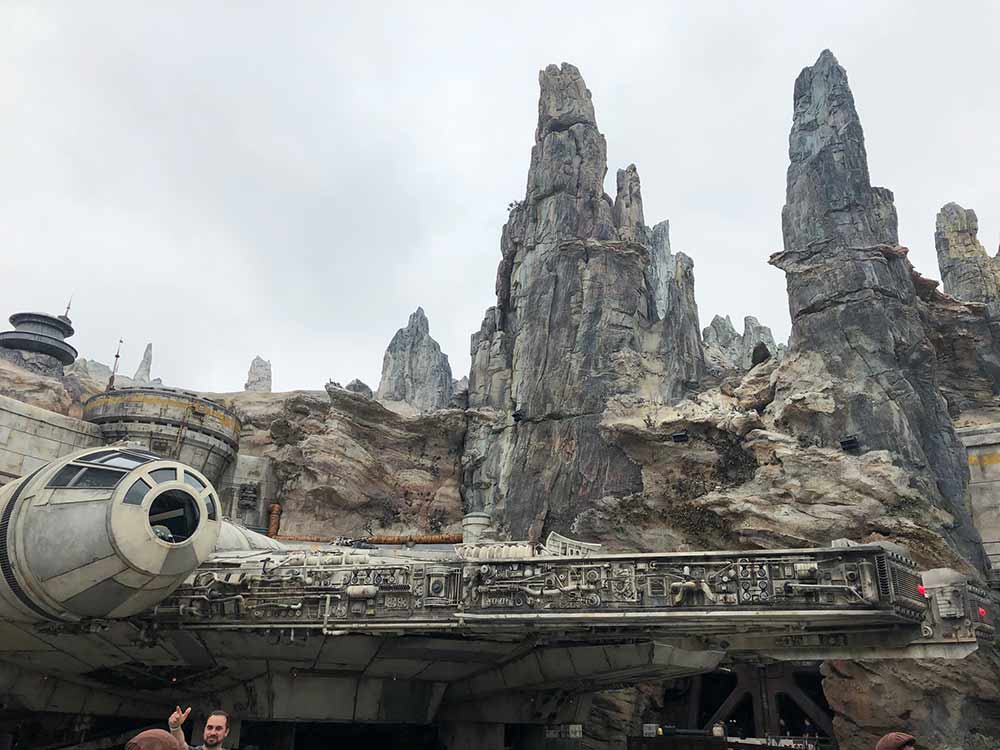 Bryce Canyon, Utah/American Southwest: The red rock spires, mining equipment, trains, and Rainbow Ridge are home to the Wildest Ride in the Wilderness. Bryce Canyon, Utah is the back drop to Big Thunder Mountain Railroad. Look for beautiful cactus and dinosaur bones. The attraction is home to a cave adventure and rumors that ghosts and spirits haunt the area. They might even light the fuses on dynamite as you explore the caves and mines of Bryce Canyon! 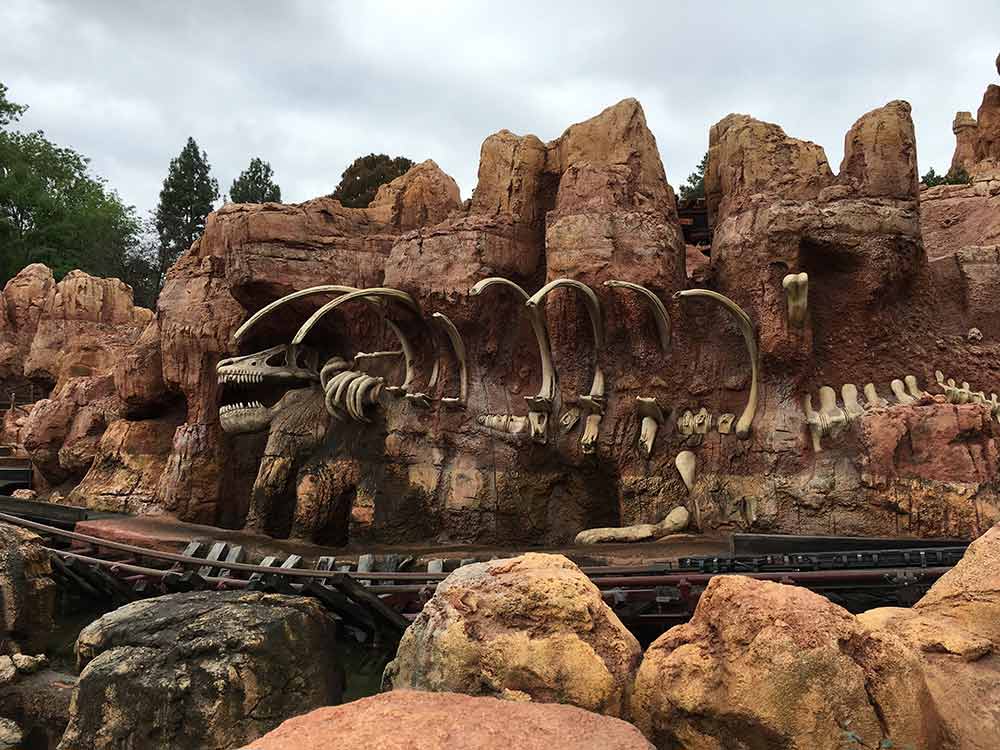 Jungle Rivers: The Jungle Cruise was one of the original attractions at Disneyland. Walt himself suggested that the attraction would become better and better each year as the trees and plants grew and matured. It certainly has! The Jungle Cruise takes guests to different areas of the world by encountering the recognizable rivers. With your guide, navigate Southeast Asia’s Irrawaddy River, Africa’s Nile River, South America’s Amazon River and India’s Ganges River.

Insider Secret: Upon exiting the Jungle Cruise, ask the Cast Member for a copy of the Jungle Cruise map. It is a fun and free way to capture the spirit of the area and see the transformation from one area of the world to the next as you visit the world’s jungle rivers. 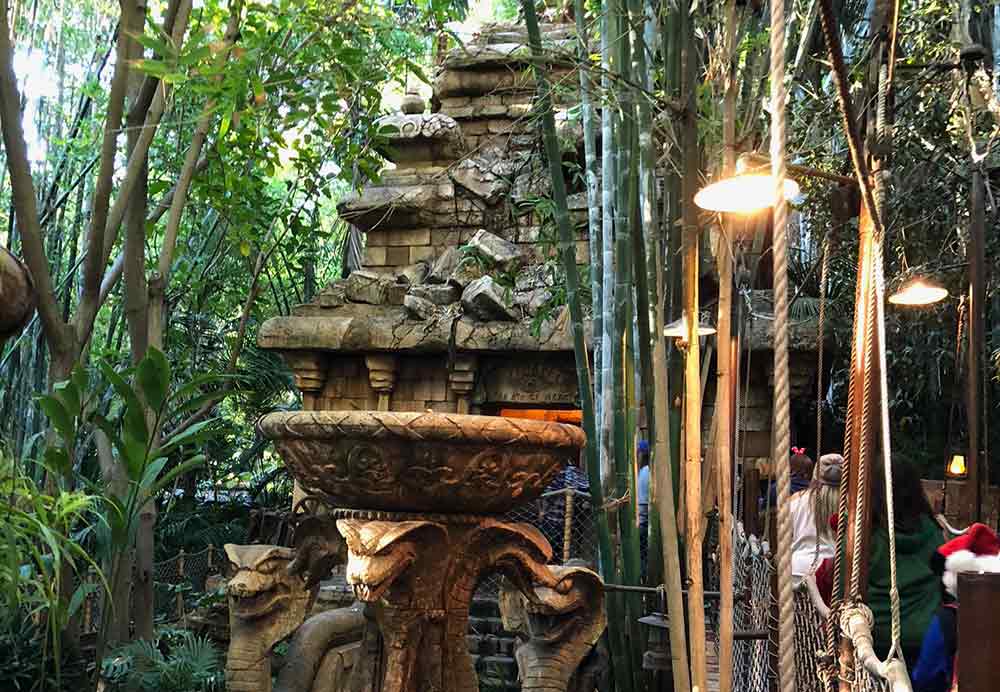 New Orleans: Stop by Disneyland’s New Orleans Square to walk the paths and streets of New Orleans, complete with subtropical trees, live oaks, Spanish moss, vines and vegetation familiar to New Orleans. Even take a look at the beautiful cast iron wok on the balconies and homes. Grab a bag of beignets and it totally feels like you are in the “Big Easy!” 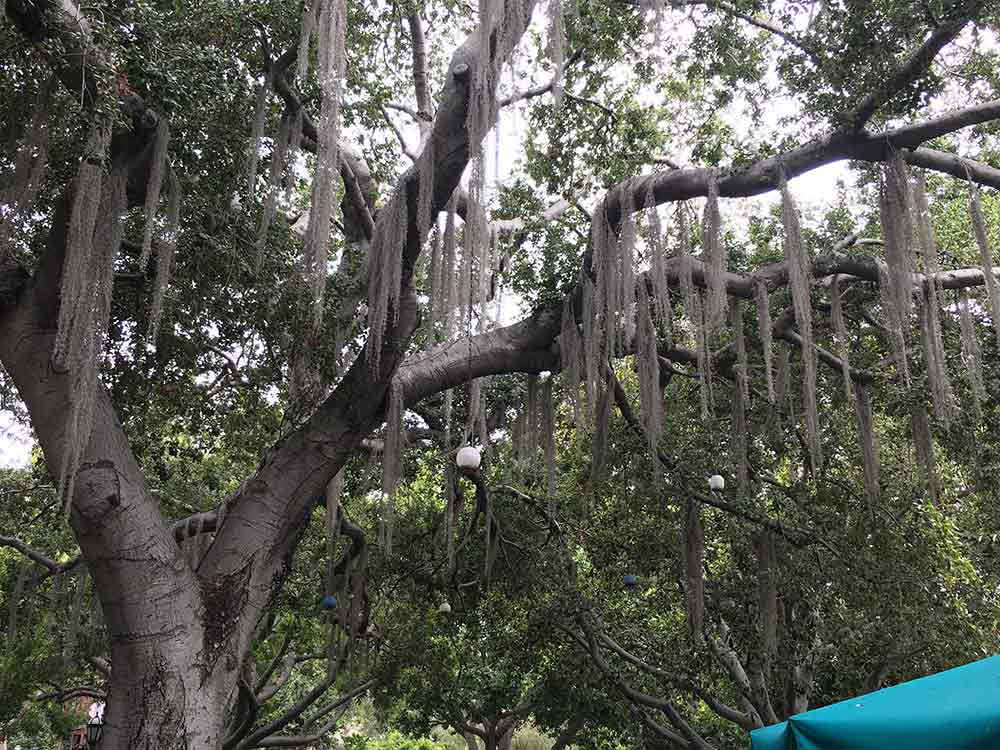 Northern Italy: Look at the detail and the landscape of the area near Pinocchio’s Daring Journey, complete with cobble stone walk ways and conifers. 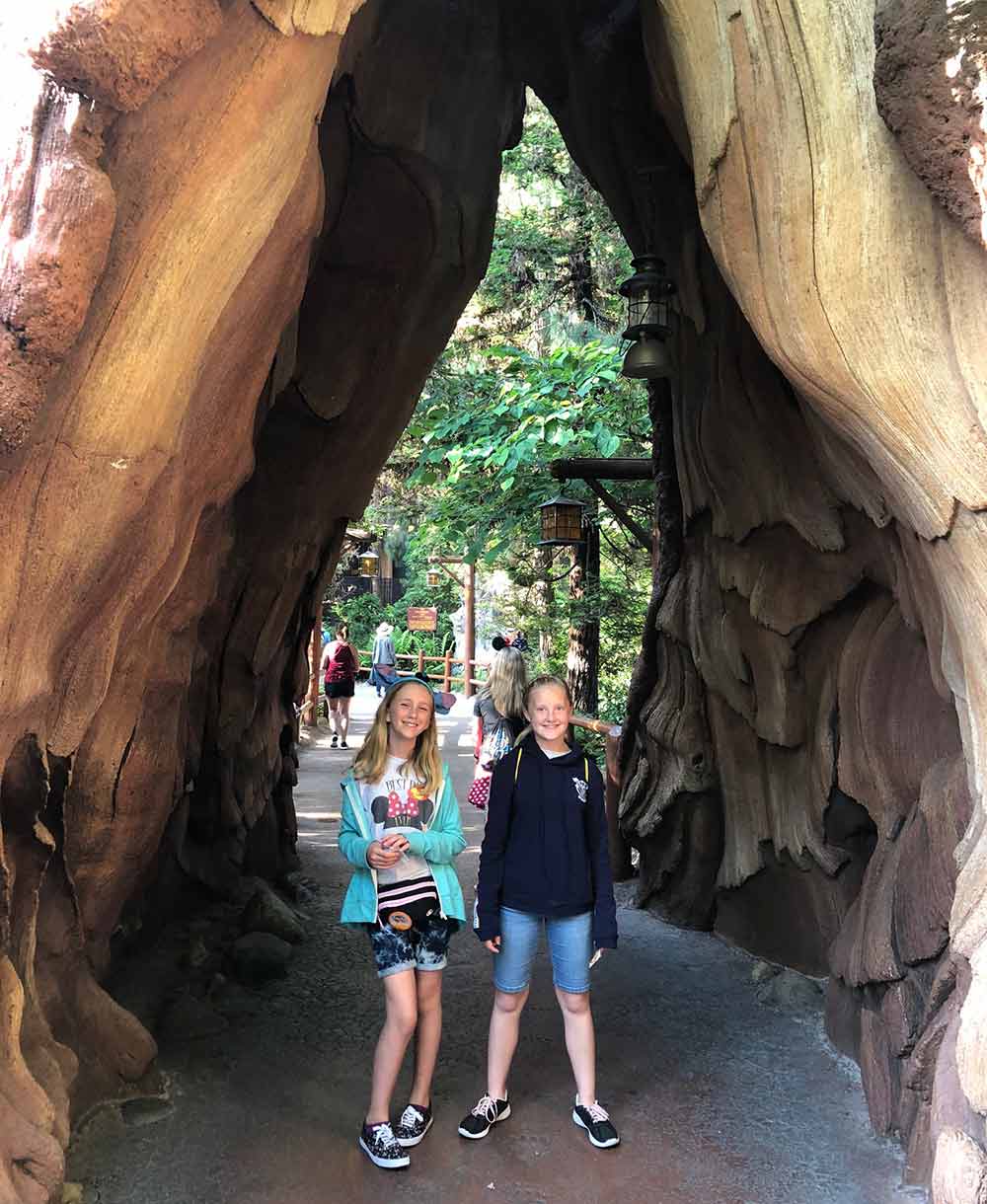 Route 66: Cars Land captures the essence of Route 66 through the dry, arid lands of southern California and Northern Arizona. Look close for the all of the details including the Cadillac Range, the cactus, and the beautiful waterfall that helps to water the beautiful town of Radiator Springs. 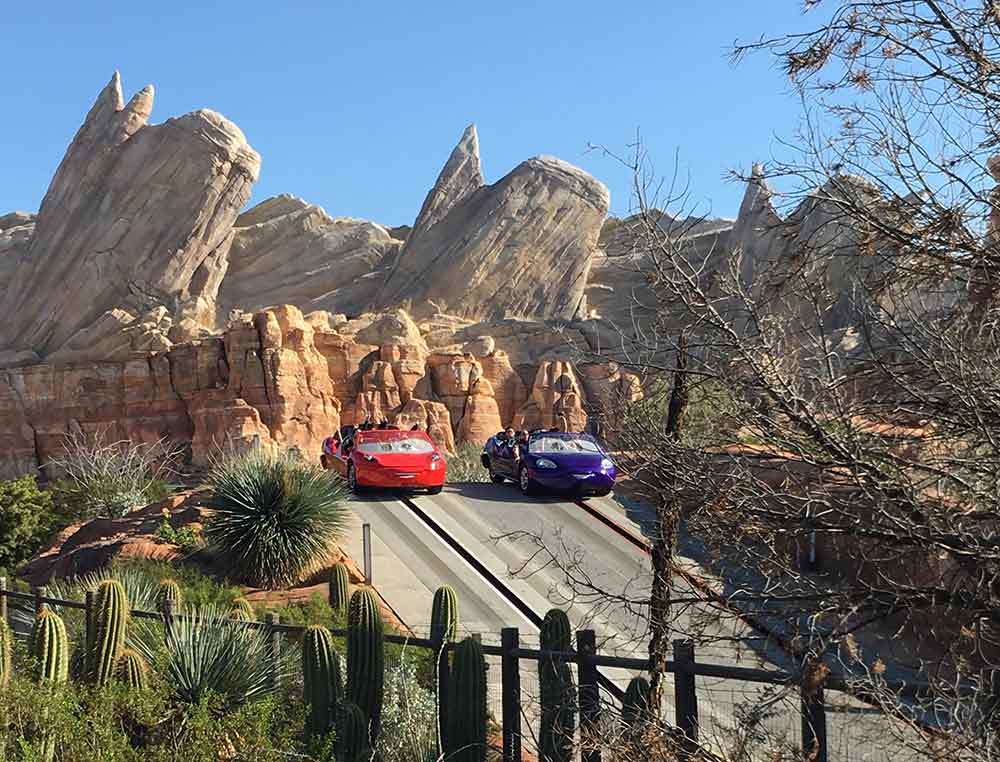 The Swiss Alps: The gigantic granite mountain that makes up the Matterhorn is also home to beautiful pine cliffs, Edelweiss flowers and other beautiful flora. Similar to other regions representing real destinations, animals can be found in the area, including the legendary Yeti. Look close for the expeditions that have adventured in the area and have been lost in the search of adventure and the monster of the mountain! In busier months, yodel with the mountain climbers that are scaling the mountain in true Scandinavian fashion. 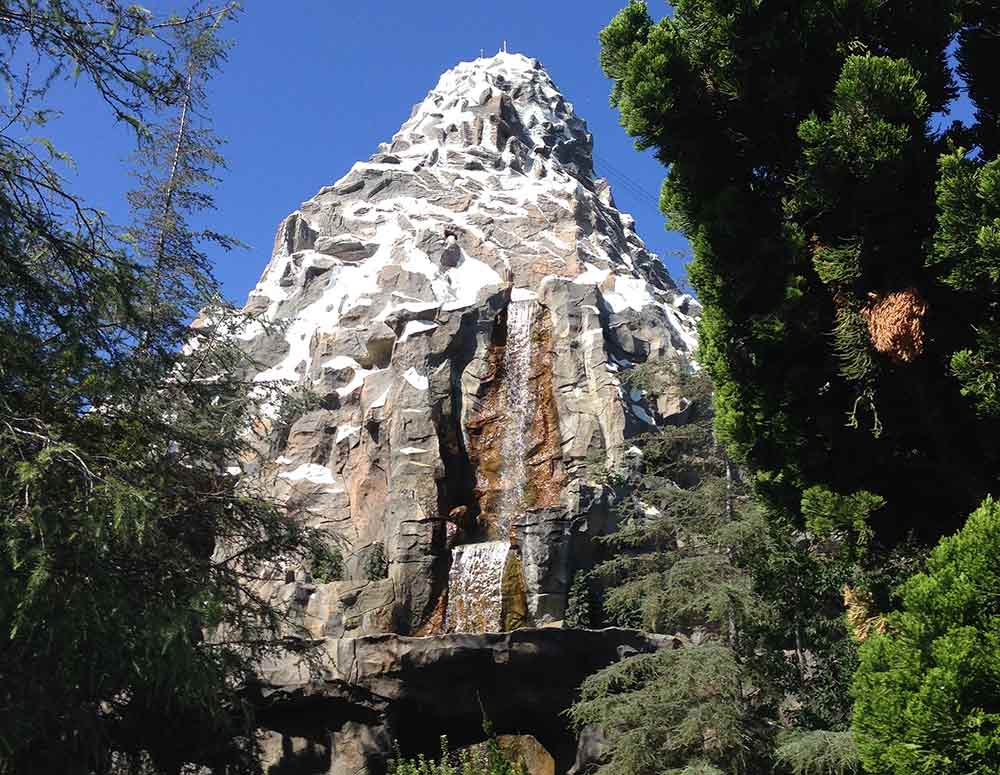 Mickey's Toontown: Imagine what it might be like to be a cartoon character by visiting Toontown! Interact with silly characters, buildings with character and water fountains that respond to your touch. 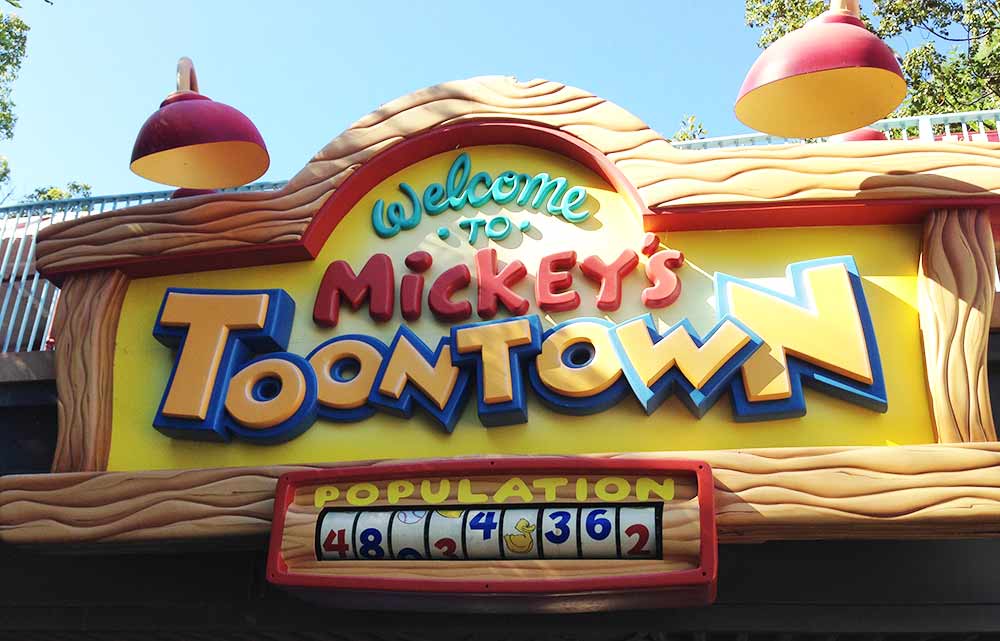 Explore the Geography of Disneyland Yourself

Walt Disney once said, “That’s the real trouble with the world, too many people grow up. They forget.” Exploring the geography of Disneyland is a great opportunity to pretend, to transform, to forget about the world and embrace a true adventure. Get Away Today Vacations can guide you to a creative vacation fit for every member of your family with everything from discount park tickets, a list of secrets to make your trip special and information for the most affordable and themed hotel accommodations. Find vacation packages online or call 855-GET-AWAY for personalized assistance. 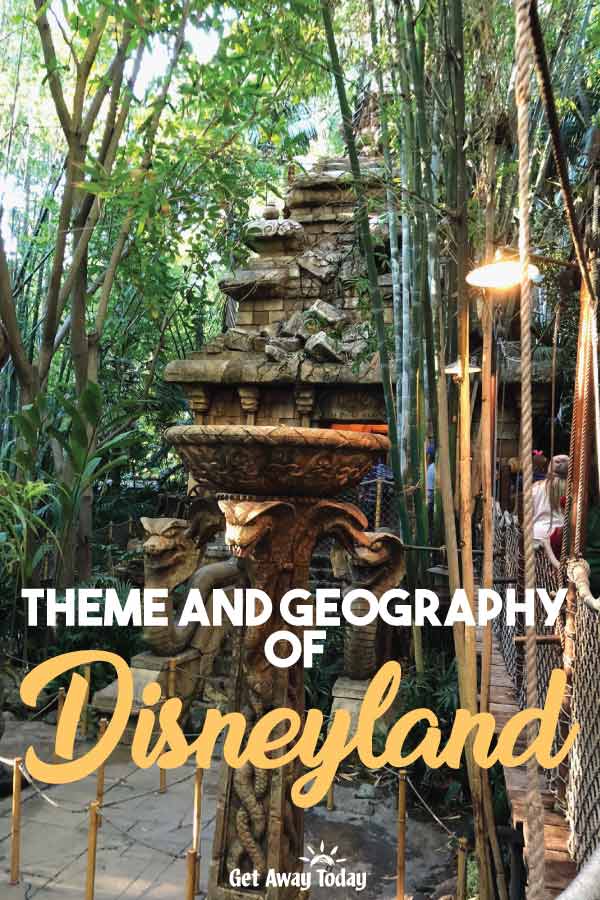 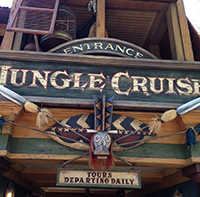 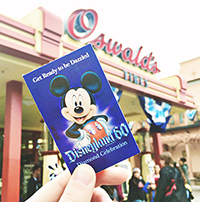 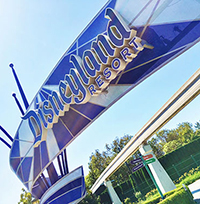