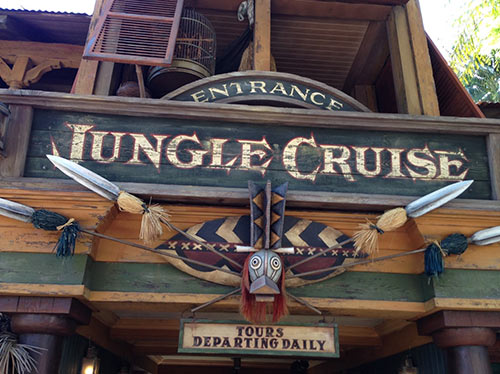 "Knock, Knock... Who's there? ... Safari. ... Safari Who? ... Safari, so good!" Hello, everyone. I'd like to welcome you aboard the world-famous Jungle Cruise. My name is Chris and I'll be your skipper for as far as we get. Wave goodbye to the folks back on the dock... They may never see you again!

The Jungle Cruise has been delighting audiences with adventure on the world’s rivers at Disneyland Park since opening day on July 17, 1955. As you venture through a colonial outpost and uncharted territories, your skipper will guide your through this dangerous journey with jokes and laughter. With so much love and history behind this historic attraction, we want to take you on a journey of the Top 13 Jungle Cruise Disneyland Facts:

“Make sure and slide on the seats all the way to the front of the boat – it is the only way that we clean the seats here at the Jungle Cruise….”

13. The Hollywood Influence:  As Walt Disney was planning Disneyland, Hollywood movies greatly influenced his decisions on additions to the park. The Disney Company was honored with multiple Academy Awards for its True Life Adventure series of films. The films were so successful that Walt wanted to somehow include them in his park. He settled on True Life Adventure Land, which we now know today to be Adventureland.

Additionally, in 1951, a popular Hollywood movie called “The African Queen” starring Humphrey Bogart and Katharine Hepburn, was about a small steam boat encountering adventures on a jungle river. It quickly became very popular with movie audiences and had a large part in influencing this attraction.  Imagineer Harper Goff referenced the movie frequently in his plans to design the Jungle Cruise.

12. Lions, Tigers and Bears - Oh My: As part of the design process for the Jungle Cruise, Disney wanted to feature live animals to be a part of the attraction as like a zoo. Imagineers and zoo keepers convinced Walt that live animals would most likely be sleeping during park hours, so he decided to use animatronic animals instead so they could contribute to the show.

"You know the crocs are always looking for a hand out. Be careful, I once had an English teacher on board and she didn’t listen to me and now she’s teaching shorthand!” 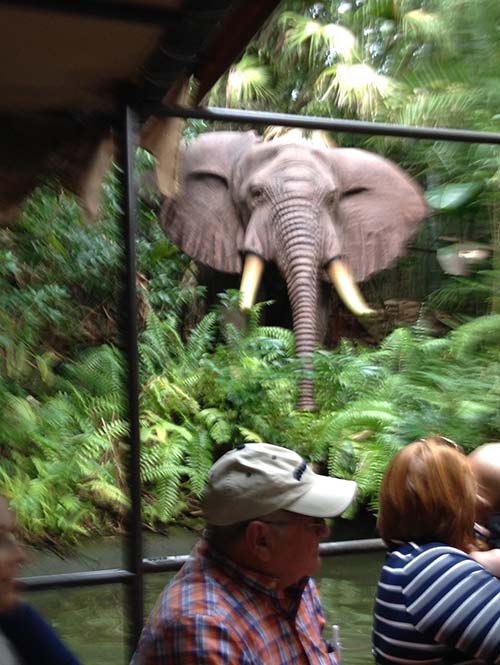 11. Not Always So Funny: The Jungle Cruise Skippers were not always the joke cracking, bad pun tour guides they are today. Originally, the attraction was designed to be a way to introduce people to the world’s animals and adventure. Walt Disney would go undercover and act like a guest in the park to get honest feedback. On one occasion, a family commented that the ride was boring and exactly the same every single time. Soon thereafter, Walt instructed the attraction to mix it up and make it fun. And so the comedian Jungle Cruise Skipper was born! Today, it certainly mixes up the voyage and each and every ride is totally different depending on the skipper. Can you imagine this attraction without this Jungle Cruise Disneyland fact?

“Look! it’s the Republican National Convention. You can take pictures because they all have their trunks on… See that elephant right there, that's the richest elephant in the whole jungle. Yeah - it's 'Donald Trunk'.” 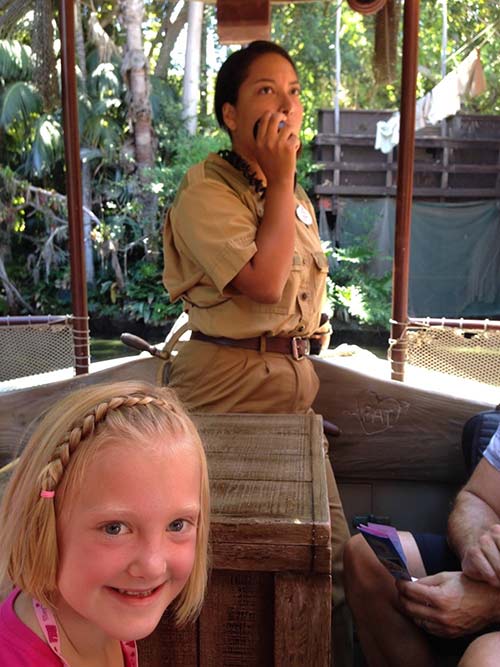 10. Hidden Gems: When you arrive at the Jungle Cruise, you have entered the base camp of the River Expedition Company, a British funded expedition to map the jungle’s rivers. For this Disneyland Jungle Cruise Fact, you are going to want to look closely for all of the unique relics including the chess set and the animatronic toucan (on the second floor). Pay close attention to the 1940’s big band music and announcements you hear on the radio, you never know what or who you might hear. And of course. keep and eye out and ask a cast member about the hidden mickeys!

“Adventurers, horseplay is not allowed while waiting to board the world-famous Jungle Cruise. If you want to play with your horse, you'll have to do it elsewhere.”

9. World's Greatest Jungle Rivers: On the Jungle Cruise you will travel along the Mekong River, the African Congo, the Nile, the Amazon. and all of the adventures that lie waiting for you. Be sure to ask the cast member at the entrance to the Jungle Cruise for a free map of the entire voyage. 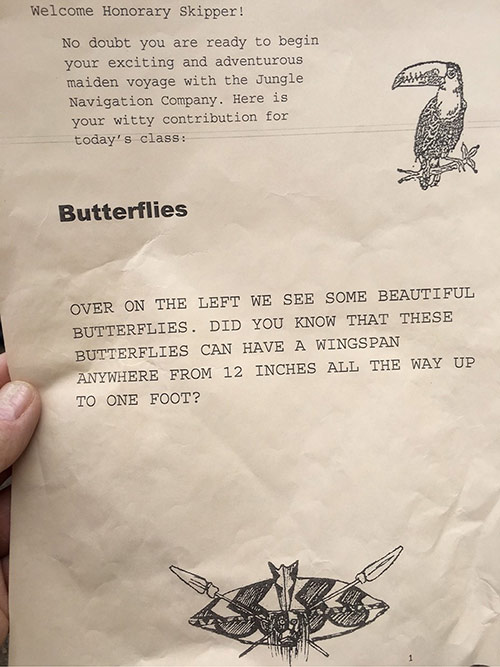 8. Hollywood Stars are Born: Disneyland provides Jungle Cruise cast members with hints and suggestions for scripting, but they can make it their own. More than one Hollywood superstar got their start on the Jungle Cruise. Rumor has it that John Lasseter, current chief creative officer for the Disney Corporation dawned the microphone. Others including Kevin Costner were found at the captain’s wheel. It's also been rumored that the great Robin Williams worked as a skipper once, but hasn't been confirmed. Next time you ride the attraction; you could be experiencing the beginning of entertainment greatness!

7. Better every year: One of our favorite Jungle Cruise Disneyland facts includes some classic Disney creativity and ingenuity. Before opening, Disneyland wanted the attraction to feel like a real life jungle. Walt said that the jungle would get better every year because the plants would get bigger and the trees would mature. So in the early days of the attraction, the plants were still young and very small. Bill Evans, an Imagineer responsible for early landscaping, took uprooted trees and plants and turned them upside down to create what he called “character plants”. They actually looked like super exotic plants you would find out in the jungle! If you look closely there is still one viewable during your cruise.

“Now please watch out for these carnivorous vines. Last week, one of them reached into the back of the boat and pulled a woman right out. It was awful! And just before she disappeared, she was feeling just vine.” 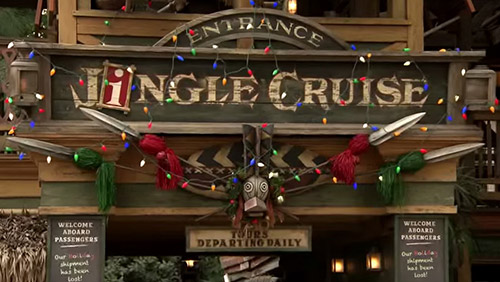 5. Dirty Water?: The water in the Jungle Cruise is not as dirty as it looks - it is done completely on purpose. The depth of the water on the attraction is very shallow and the mechanics, tracks and other items that make the Jungle Cruise work are easily visible in clear water. In an effort to keep the hidden magic alive, Disneyland colors the water to hide the mechanical portion of the attraction.

“Quick, don’t act like a banana.”  With the Jeep upside down after the gorillas ransack of the camp:  “Oh look, it appears that they got the Jeep to turn over.”

3. Fun Puns: The backside of water!  Your boat narrowly escapes the famous Schweitzer Falls – named after Dr. Albert Falls!  What is the most dangerous animal in the jungle?  The elephant?  Nope, it’s the elephant’s mother in law!  It looks like those adventurers will get the point in the end… See the guy on the bottom?  That’s Hauntas – it looks like that Rhino Poked-A-Hauntas! These iconic puns make the Jungle Cruise what it is and are why this attraction is so beloved. We are 'pun'sure what our favorite Jungle Cruise Disneyland Fact is, but this one might be 'pun'mber one. 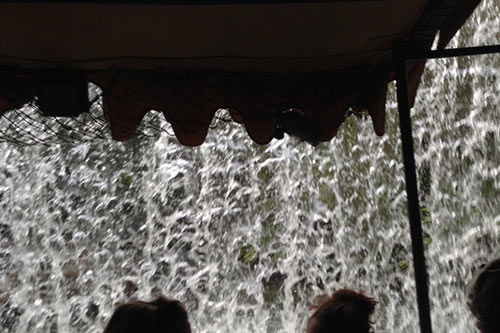 2. The Drums: Drums and chanting can be heard as your cruise enters cannibal country… "Meet Trader Sam – he is always trying to make a deal!  This week’s special:  He will trade you two of his heads for one of yours!" Trader Sam has become so popular that he has opened his own bar (parent approved for children before 6:00PM) near the Disneyland Hotel. If you are a Disney fan, Trader Sam has tucked away several hidden gems on the walls in his bar. We don't to take the fun of finding these hidden treasures in this Jungle Cruise Disneyland fact - you are on your own for this one.

"There's old Trader Sam... Three explorers came through here last week and Sam invited them for dinner. When he told them what the menu was, they completely lost their heads. I got their late. All I got was the cold shoulder and some finger food." 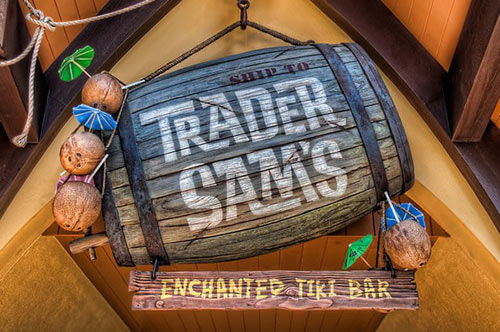 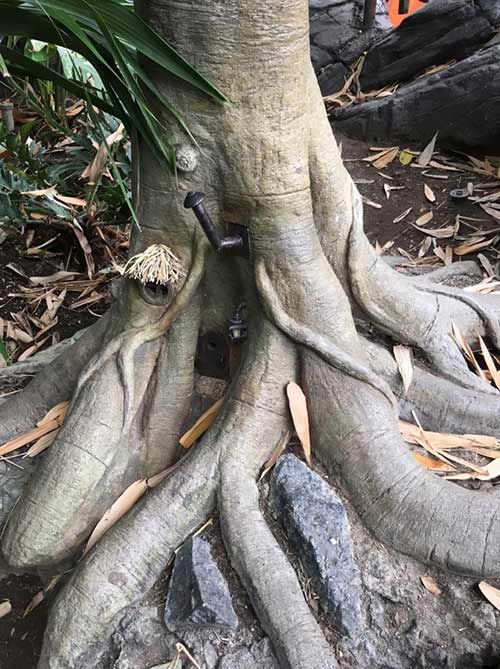 “OK rise like bread folks, no loafing around. I know my jokes are stale and crumby, and I'm sure I could do butter but its the yeast I can do on the sourdough I make here. I think I get my rye sense of humor from my dad. It's no wonder. He's Danish. I was born under a croissant moon and I used to be the toast of the town, until one day I just got spread too thin. Hey, where are you going, I'm on a roll!  Oh well I guess you have to jam.”

We hope these Jungle Cruise Disneyland facts helped you get an inside look at all of the magic and fun that goes on at everyones favorite Jungle Cruise attraction! 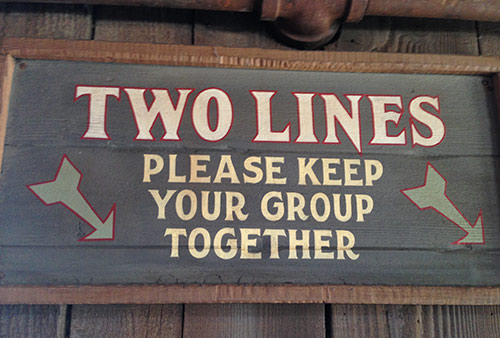 With these Jungle Cruise Disneyland facts, it is time to take your family on an amazing adventure of their very own. Get Away Today can help guide you to create the perfect get away for your family! They have everything from discount park tickets, insider secrets to make your trip special and information about the most affordable hotel accommodations. Book your Disneyland vacation online or call the travel experts at 855-GET-AWAY. 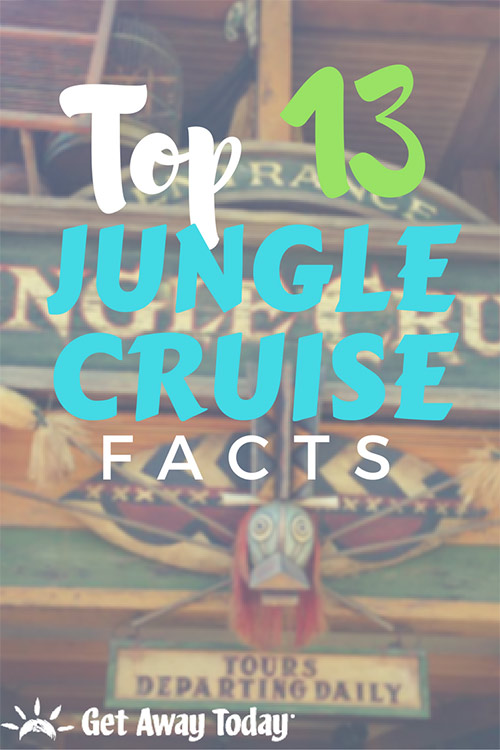 Hi Jen! Thank you for making us aware of that - we have edited the article with that new information. :)

Robin Williams was NEVER a skipper.

I love that ride. What cool info! I love it when they point out the plants... There's one.. There's another one.

I love going on the Jungke Cruise! The skipper's are so different, it is a different experience every time.