Prior to the creation of Disneyland, Walt Disney scheduled weekends for activities with his family. He was frustrated that there was no amusement park that allowed parents and children to enjoy the attractions together. After sitting on a park bench watching his daughters ride a carousel without him, he thought that there should be a place where parents and children could play together. There, on the park bench, Walt began to make plans for Disneyland. The park bench and one of the carrousel horses can be seen at the entrance to the Opera House on Main Street, USA in Disneyland in honor of the idea that started the Happiest Place on Earth.

1. See movie history. Near the exit of the Indiana Jones Adventure, you will discover the military truck that Indiana Jones slid under to save the Ark of the Covenant in the original Indiana Jones movie, Raiders of the Lost Ark. Look closely at the rod on the bumper. Stuntmen used it to guide them safely as they performed this famous stunt. Does Jack Sparrow’s rocking chair near the conclusion of the Pirates of the Caribbean ride look familiar? You may be surprised to know that it appeared in the Haunted Mansion, starring Eddie Murphy. Speaking of the Haunted Mansion, look on the far side of the ball room on the ride of the same name for a glimpse of Captain Nemo’s organ from the Disney Classic, 20,000 Leagues Under the Sea. 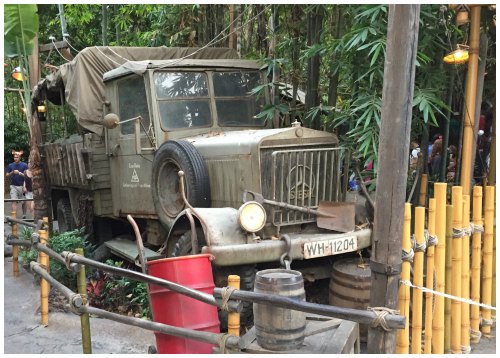 2. Wake a parrot. Ask a cast member for the opportunity to wake up Jose’, the red, white and green audio animatronic parrot that hosts the Enchanted Tiki Room attraction. Although magical today, think how amazing it would have been when the Tiki Room opened in 1963. Guests were convinced that the birds were real! Some reported that a few birds had escaped! Look close; the birds even appear like they are breathing.

3. Find the Cheshire Cat’s smile! Try on a hat at the Mad Hatter’s shop in Fantasyland. Look in the mirror, the Cheshire Cat from Alice in Wonderland will appear for special guests.

5. Find the hidden features in Fantasy Faire. This newer area is a great place to meet and greet several of the Disney princesses and see some very entertaining vaudeville-style plays. Periodically, Rapunzel’s 18 foot tower will come to life with lights and sounds, but be patient and ask a staff member when to expect the show. In addition, look for the “turn of the century animation machines,” see how many Disney characters appear when you crank up some fun with this unique form of entertainment. 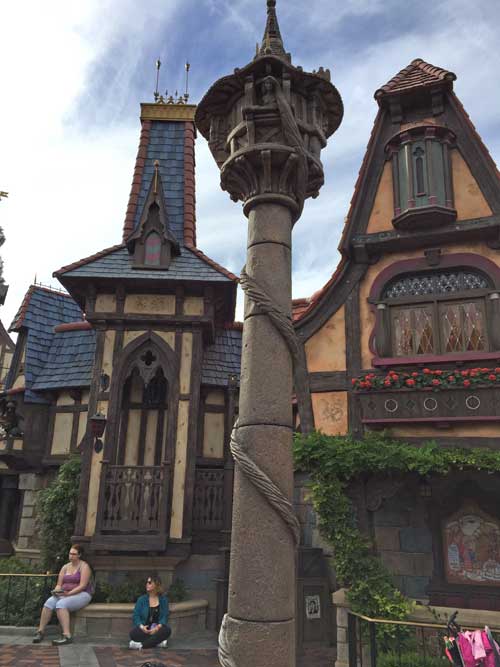 6. Get free chocolate! Experience the rich history of San Francisco. Stop by the Ghirardelli Chocolate Shop and Soda Fountain and get a free Ghirardelli chocolate square in the Pacific Wharf area of California Adventure.

7. Explore Walt’s Hollywood. Buena Vista Street in Disney California Adventure is filled with references to early Hollywood when Walt Disney arrived in the early 1920s. Find the references to Walt’s first cartoon character, Julius the Cat, and his second, Oswald the Lucky Rabbit. Walt lost the rights to Oswald and the Disney Company recently acquired him back and he can now be seen on Buena Vista Street!

The references can be hidden, so use your super sleuthing skills, for example the Fiddler, Fifer, and Practical Café is a reference to one of Walt’s early films about the Three Little Pigs. See if you can find the reference to Walt’s original idea for Mickey Mouse’s name, his third cartoon character. Take a look at the mail boxes, recognize any names? How many stars would have been on the American flag in 1920? See if you can find it! Don’t forget to swing by the Chamber of Commerce building and pick up your very own edition of The Buena Vista Bugle for fun information, games, and information about the park! 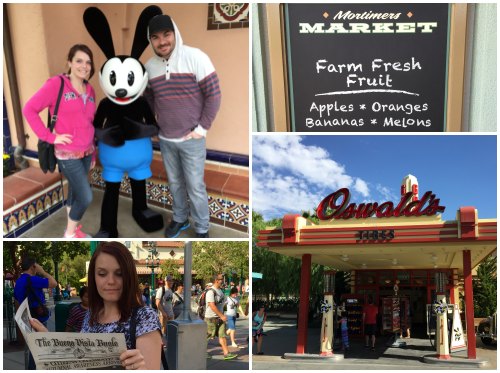 8. What’s that amazing smell? Disneyland pays attention to everything, even the smells that you encounter in the park. Stop by Soarin’ to get a whiff of pine forests and orange groves. On Main Street, USA the smells of vanilla linger during most of the year. During Christmastime, the smells of peppermint permeate the promenade. Stand in front of the Gibson Girl Ice Cream store to get a great sniff! A classic smell that attracts many Disney guests is the uniquely placed popcorn machines. Within each machine is a tiny character turning the popcorn. They change often and switch out with the seasons and holidays. How many can you spot? 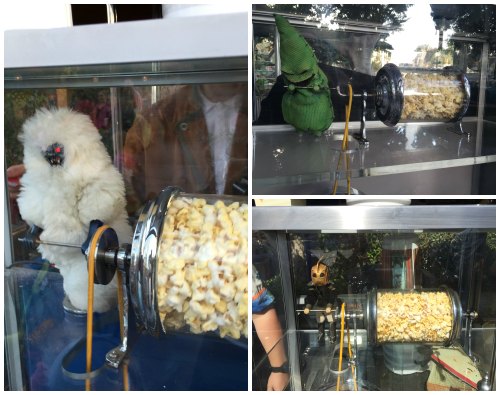 9. Talk with a Potato. Disney spends a lot of effort ensuring that guests are entertained while waiting in line. Near the entrance of the Toy Story Mania attraction in California Adventure, Mr. Potato Head is featured as a “board walk barker” and tells jokes, explains the ride and even recognizes guests and interacts with them. Stop by, you may find that you’re a little disappointed that the line is moving so fast. 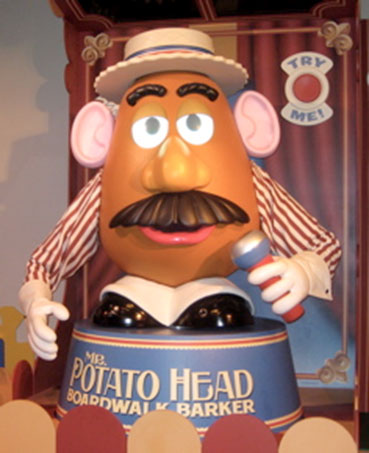 10. Sing with Snow White. Visit Snow White’s Grotto near Sleeping Beauty’s Castle to view the beautiful Italian marble statues of Snow White and the Seven Dwarfs. The sculptures were a gift to Walt Disney and he wanted to find a place to display them. However, there was a problem. Snow White was the same height as the dwarfs. Using an engineering and visual arts technique called forced perspective; the park placed the statues in a way that makes you think that Snow White is taller than the dwarfs. While you are there you can hear the echo of Snow White’s voice in the wishing well. 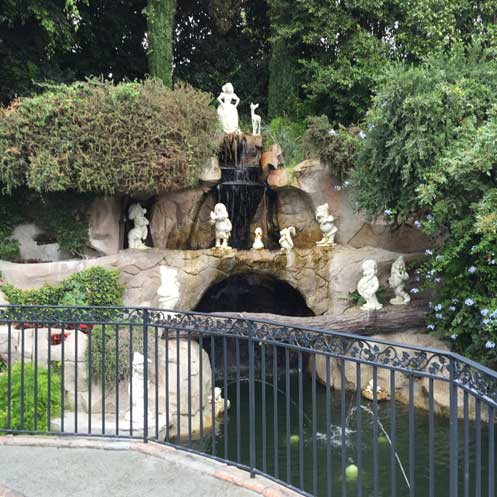 The magic of Disneyland can be found in the details. Make sure you take the time to enjoy all that there is to see. Speaking of details, there is no one like Get Away Today. They will ensure that every detail is complete for your next adventure to Disneyland and have the best price guaranteed with discount Disneyland tickets. Let them help you plan your next adventure to the Disneyland Resort! Book any of their Disneyland packages online or call their vacation experts at 855-GET-AWAY. 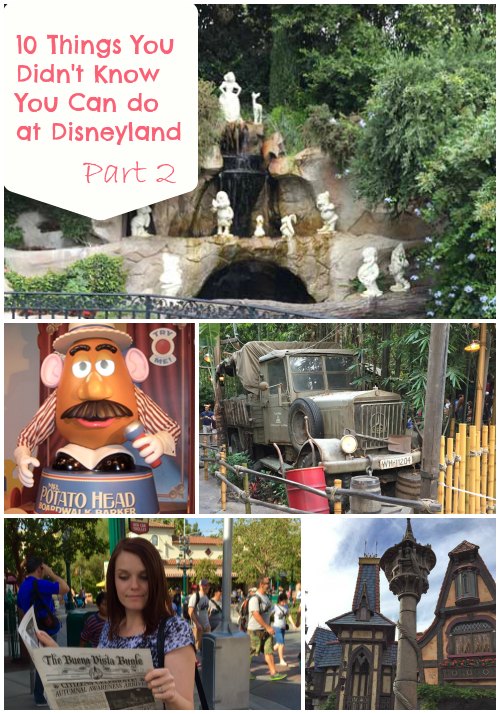 Going to Disneyland next week and for the first time taking 2 grandchildren. Going to be a grand time!

Years ago (2008) when I took the Walk in Walt's footsteps tour, the tour guide asked if anyone knew where the statues came from and I chimed in with the gift response and she said that the Snow White and Seven Dwarfs were actually not gifts and that that was just a rumor they spread for a long time because they were embarrassed by their mistake.

Just an FYI it is 'Sleeping Beauty Castel' offically not Sleeping Beauty's Castle. It's the name of the Castel is does not show possession. Otherwise great tips.

going for the first time in May. So EXCITED !!! Thanks for all of the tips

Really looking forward to my visit thanks for the great tips

Hey Robert, there are cats at Disneyland. Many of them hang out in the area by the story book boat ride. They keep the mouse population down (a little ironic to be sure). There is only rumor about Star Wars land. One rumor suggests that it may replace Toon Town. Stay "tooned" for more info....

Thanks! What about the cats at Disneyland? Also, any word on Star Wars land?

Chris, always great information! will be in Disneyland Dec 1. going to be a little more fun now if thats possible! Thanks!

I want to go to Disneyland now. Thanks for sharing. I really appreciate this information. It gives me a great list of things to see.