There is something about a parade that brings magic to a great day. Parades are filled with the best of a hometown, or at least the celebration of those that want to make the world a better place. 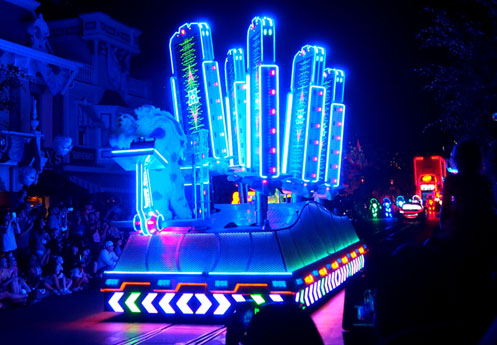 Photo courtesy of Stephanie Curtis. Your pals from Monstropolis show up to celebrate the "Paint the Night Parade" as part of the Disneyland 60th Anniversary Celebration. The scare doors open to reveal many of Mike and Sully's Monster Friends as they "light up the night!" 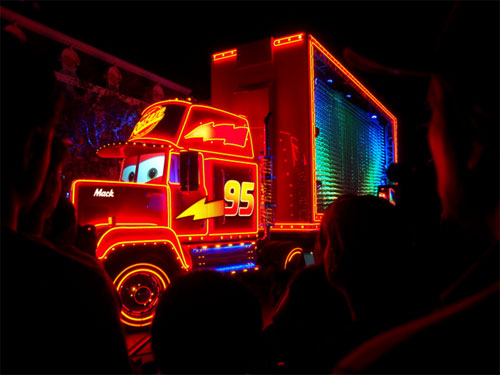 Photo courtesy of Stephanie Curtis. Mac from Disney / Pixar's Cars lights up the night!
Whether celebrating a great day with your family or enjoying a special event, Disney knows how to throw a parade! Disneyland has been holding parades on Main Street, U.S.A. for over 60 years. The parades started with a live band. Recorded music was added in the 1970s and since then, a parade has been featured nearly every day. Why? Because every day is special at Disneyland!
Here are some inside tips and hints to make your parade viewing even more special:
1. View the parade from a different location. There a few unique spots that may give you a different experience and even allow you to enjoy the parade with less of a crowd. Try viewing the parade from "it’s a small world," or at the Town Square; there are often less crowds and more space.

2. If there is a second parade over your dates, and you like to stay up late, watch the later one; it is often less crowded.

4. The parade route is filled with stage lighting. If you look at the top of the buildings near parade time, the lights stand up. They are perfectly designed to light up the night and give you the best colors and view. New this year, the Paint the Night parade uses its own light to delight audiences. Make sure and catch both parades, Mickey’s Soundsational Parade and the Paint the Night Parade. Look in the cement on Main Street for tiny sensors in the streets. They help to keep the floats centered to ensure that the lighting hits the exact designated spot every time.

5. The parade’s control booth can be seen above the bank (now the Disney Gallery) on Main Street U.S.A.. The booth controls the sound, lighting, and cadence of the parade.

6. If you are not in the mood for a parade, which is hard to imagine, it is a great time to enjoy an attraction or do a little shopping while the lines are short. Again, go back to the rule that if there are two parades, take the time during the first parade to play at the park.

The parades are often used to promote Disney projects, films, or future attractions and to celebrate past memories. Pre-parades have been part of the Disney experience for some time. It is a great way to add a bonus to the parade. For example, before its release, the characters from Frozen were part of a pre-parade. If you are lucky, you will be able to see an unannounced pre-parade. 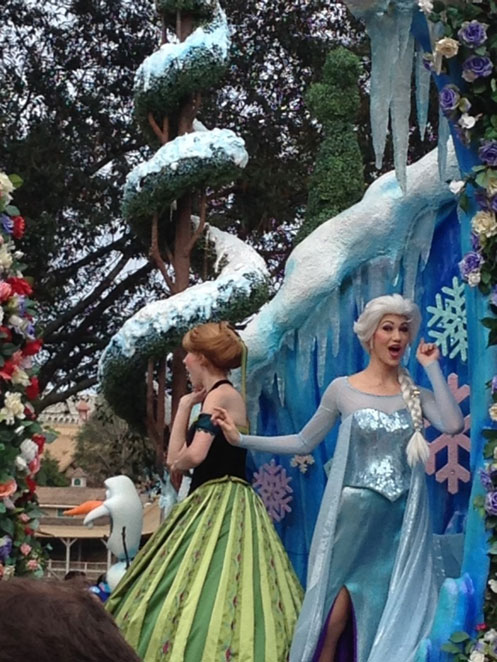 Elsa, Anna, and Olaf introduce themselves to the Disney audience as part of the parade before Frozen's release in theatres. Photo courtesy of Candice Dallin
Since opening day on July 17, 1955, 72 different themed parades have marched down Main Street, entertaining guests and bringing magic and music to those at the park. Here are some highlights of parades from the past:
The first parade, Disneyland, opening day: July 17, 1955: The parade celebrated the different lands at Disneyland and featured many Hollywood legends that were invited to the park by Walt Disney himself. A counterfeiter created 26,000 additional unauthorized tickets and sold them to locals. The place was packed,but they loved the parade! 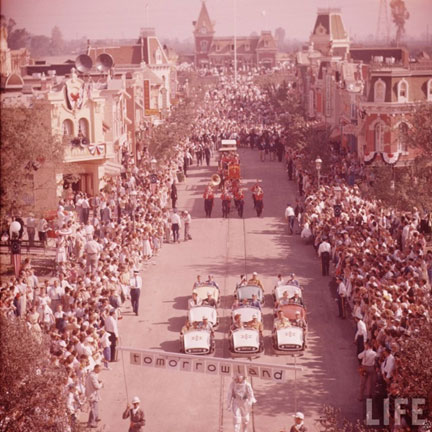 Life Magazine captured this rare photograph of the first parade on opening day.
Parade of Many Lands. 1957-1964. The parade celebrated the culture of the world and featured Christmas in many lands, including Santa Claus! 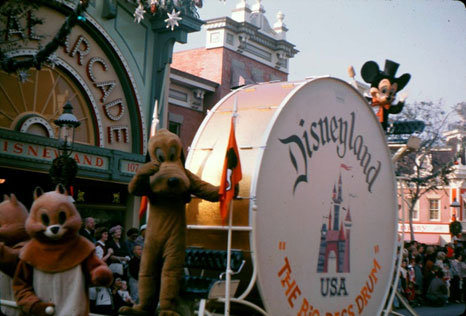 Tencennial Parade – 1965 – Developed to celebrate the 10th anniversary of Disneyland. The parade featured different scenes from Mickey Mouse movies. It also featured the first appearance of the famous Big Bass Drum, which became of parade tradition for years, a version can now be seen in Mickey’s Soundsational Parade! 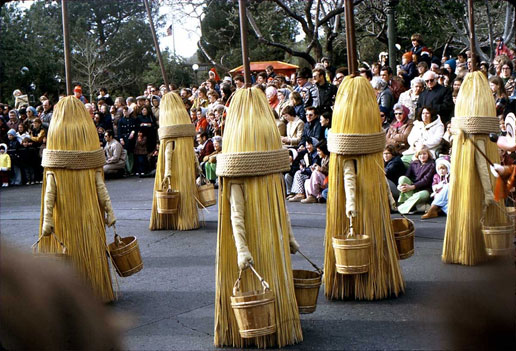 Fantasy on Parade – 1965 – 1976 – a great parade celebrating Disney movies and memories. Look at Fantasia Mickey leading the brooms from the movie. 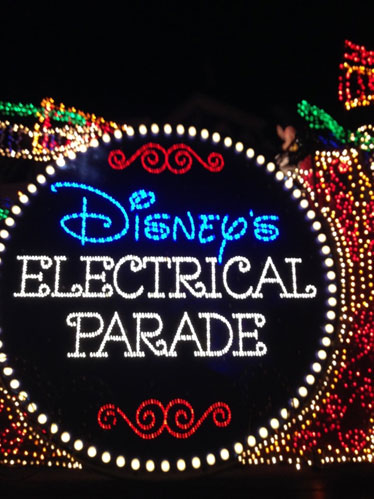 Photo courtesy of Candice Dallin
Main Street Electrical Parade – 1972-1975, 1977-1983. The Main Street Electrical Parade was conceived by Jack Wagner, the original voice of Disneyland. His voice welcomes the crowd in “electronica” to the Disneyland Main Street Electrical Parade. The parade was also part of Disney California Adventure Park's line-up from 2001-2010 and can still be seen today at the Magic Kingdom in Walt Disney World.
25th Anniversary Parade – 1980 – the parade was an homage to the opening day parade featuring different lands including new additions. Watch it here:
Disneyland 30th Anniversary Parade – 1985 – Floats decorated in special anniversary colored flags signs and banners. Watch a portion here:
45 Years of Magic Parade – “Parade of the Stars” - 2000 – Held in honor of Disneyland’s 45th anniversary. Watch it here:
50th Anniversary Parade of Dreams – 2005-2008 – Parade in honor of Disneyland’s 50th birthday. Floats were gold in color to celebrate the Golden Anniversary. Plus hidden Mickey’s were scattered throughout the park, including the parade. You can watch it below:
Mickey’s Soundsational Parade – 2011-Present – Designers of the parade pay homage to many designs of the past, including the big brass drum, and the design style of Mary Blair, who designed "it's a small world." 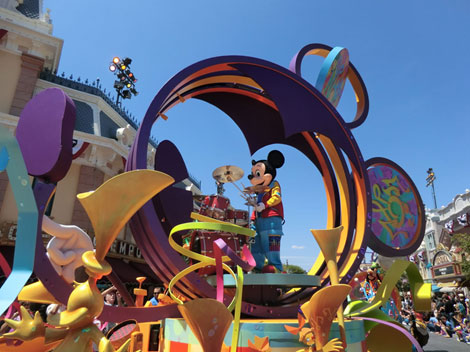 Photo courtesy of Candice Dallin
Paint the Night Parade: 2015- present: Great memories of all of the parades before, a celebration of Pixar, Disney, and an homage to the electrical light parade with updated fiberoptics and incredible technology. Including the video screens, the parade has more than 1.5 million sources of light. The 500 strobe lights are a custom lighting product created by Disney and it is all marching down Main Street now! 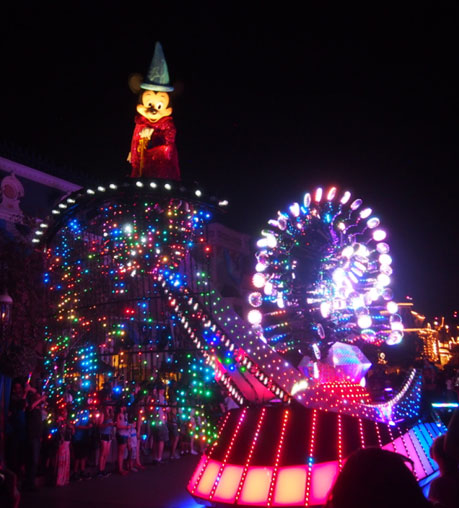 Photo courtesy of Stephanie Curtis. Mickey "conducts' the finale of the parade from 12 feet above the street. The spiraling kinetic sculpture behind Mickey has 124 paddles on 31 armatures.
Check Disneyland.com's calendar 30-45 days prior to your visit to make sure you fit the parades into your itinerary. Ask your Get Away Today expert for special parade times. For example, Disneyland films its Christmas parade sometime in November and you can be there to watch it live and then see it again on TV on Christmas Day. Guests can attend the parade celebrating the Rose Bowl winners the day after New Year’s, or particulate in a special Fourth of July Celebration, or Disneyland’s birthday (July 17). Every day is special at Disneyland, and Get Away Today would love to help you get there.

Check out all of Get Away Today's Disneyland packages online or call our Disney Experts at 855-GET-AWAY.


Check out more of Chris's articles on Packed with Fun: