There are so many fun things brewing at the Wizarding World of Harry Potter at Universal Studios Hollywood. One of the best things to experience when you visit the bewitching world is the food. Muggles have the chance to sample signature desserts, drinks, and entrees taken straight from the Harry Potter books and movies. A walk through Hogsmeade is like walking through a dream...only it tastes really good. You don't need a magic spell to conjure up these fun Harry Potter Cauldron Cakes at home in your own kitchen. Although, it might take a pretty strong spell to prevent them from getting gobbled up once they are on display.

These cupcakes are made in several basic steps. If you work them one part at a time, they are fairly east to construct. Don't be overwhelmed with the length of the instructions. It is really quite fun!

To start, bake your favorite chocolate cupcakes. I typically use a box mix, but then doctor it up a bit to make it extra tasty. I replace the oil with butter and the water with milk. Then add 1/2 cup of sour cream to make the cakes really moist and rich. Bake according to the directions on the box. You can tell when cupcakes are ready to come out when you press your fingers lightly onto the top and the cake bounces up against your fingers in a nice spongy way. 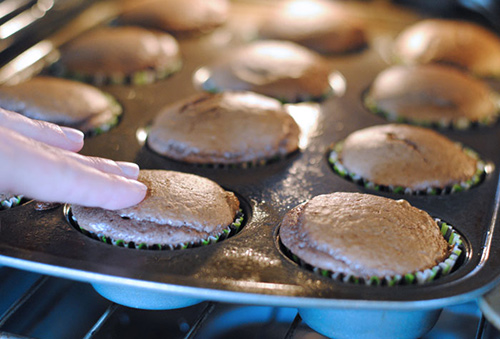 Let the cupcakes cool completely. In the meantime, begin making the chocolate cauldron handles. They are made from melted chocolate chips. I like to buy the Guittard brand of milk chocolate chips. They melt really well in the microwave and the flavor is nice and chocolatey without any waxy residue. Pour about 1/3 cup of chips into a microwaveable dish. Melt them in 15 second increments. Stir between each time to prevent scorching. It will probably only take about 30 seconds. Place the chocolate into a small ziplock bag or a frosting bag. Snip off the end to make a small hole. Press the chocolate onto a wax covered baking sheet. You want the handles to look like the photo below. They look kind of like a letter U. Place the cookie sheet into the fridge or freezer to set the chocolate. 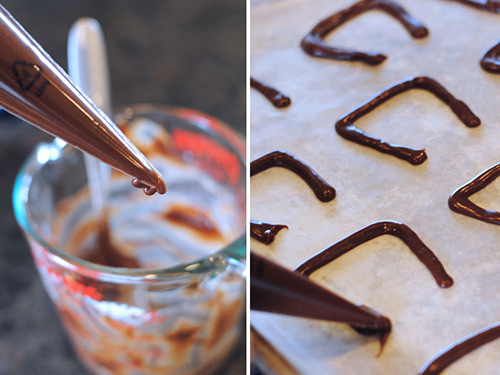 Now, it is time to make the frosting. You can simply buy chocolate frosting in a tub at the grocery store, or make your own. I suggest making it from scratch. It is so tasty!  Combine 1 stick of soft butter, 1/4 cup cocoa powder, 2 cups powdered sugar, 2 tablespoons evaporated milk (or regular milk will do), 1 tsp vanilla extract, and a few shakes of salt. Stir it all together until it is smooth and creamy. Place it in a ziplock bag or a frosting bag and cut off a corner or the tip.  Set aside for a few minutes. 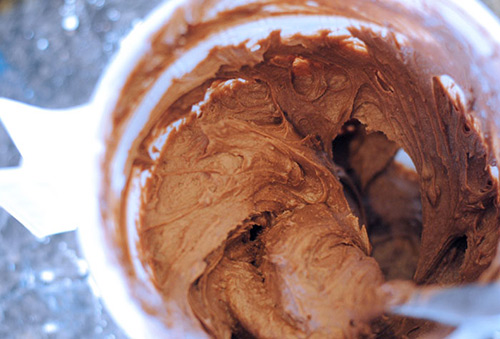 The mousse filling is a combination of instant chocolate pudding, milk and a pint of whipping cream. Follow the instructions on the box to make the pudding. I would recommend using the "pie" version of the recipe instead of the "pudding" recipe. It requires less milk and makes the pudding a little more firm. Then, whip a pint of whipped cream with 1 tablespoon of sugar, and 1 tsp of vanilla. Beat it until the cream forms soft peaks. 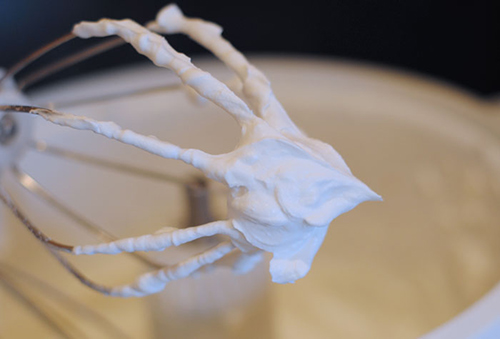 Fold the pudding and the whipped cream together to form the rich fluffy mousse filling. 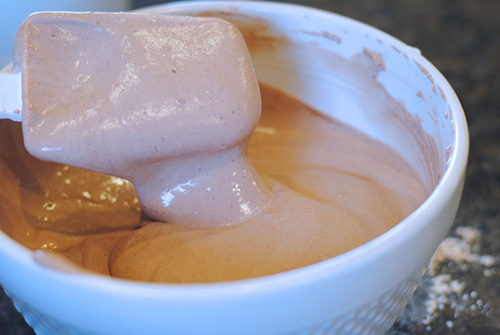 Now that all of the elements of the cakes have been prepared, the final step is to combine them to create the cauldrons.

Start by unwrapping each cupcake. Then, melt 1 cup of milk chocolate chips into a small glass bowl. Stir it every 15 seconds during the process to prevent scorching--just like you did when making the cauldron handles. When the chocolate is smooth and soft, dip the top end of the cupcakes into the the melted chocolate to create a chocolate bottom. Let the excess chocolate drip off before placing it onto some wax paper to set. 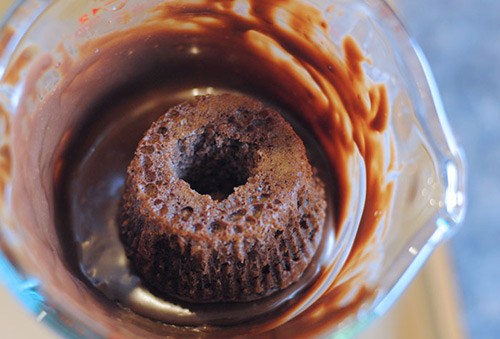 Once all of the cupcakes have been dipped, cut a hole out of the top of each cake. (It is actually the bottom of the cupcake, but for this recipe, it is the top!) Insert a sharp knife into the cake and gently slide it around in a circle. The cake pops out nicely! You can eat the little cake pieces to give you the energy to finish building the cauldrons. 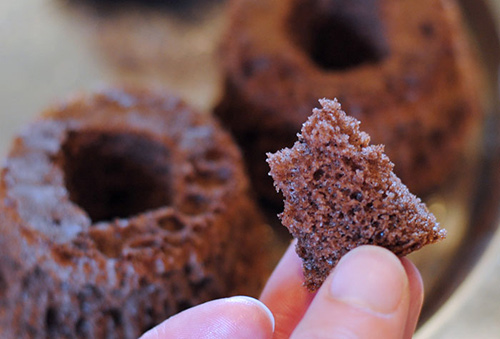 Fill the holes with the chocolate mousse and then draw a circle around the top rim with the frosting. I added a bit more mousse after the frosting was on, so my pots are really boiling over with a light fluffy chocolatey potion. 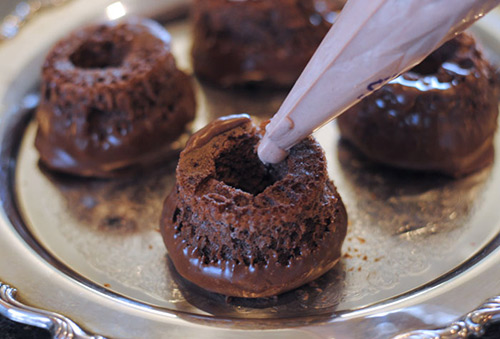 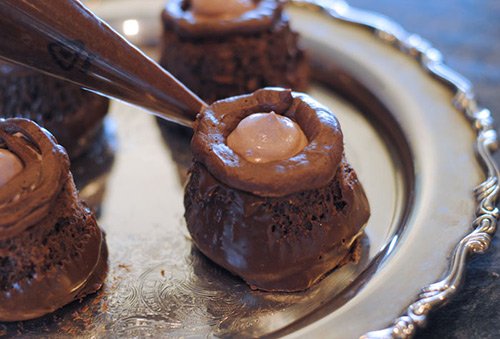 Carefully remove the chocolate cauldron handles from the wax paper and insert them into the cupcakes. 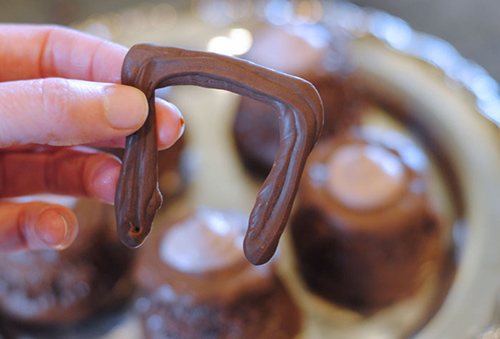 With that, the Harry Potter Cauldron Cakes are complete! 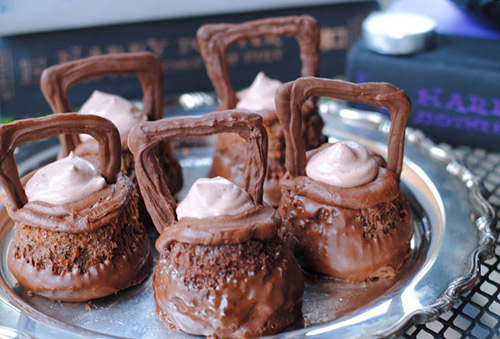 At Honeydukes, the Harry Potter cauldron cakes are served with a twirl of white chocolate on the top. I decided to skip the delicate ribbon of chocolate and placed half of a white chocolate KitKat candy bar into the tops instead! I figured the kids could use them as a spoon to lick up the mousse. It was a delicious decision and one that I would recommend. 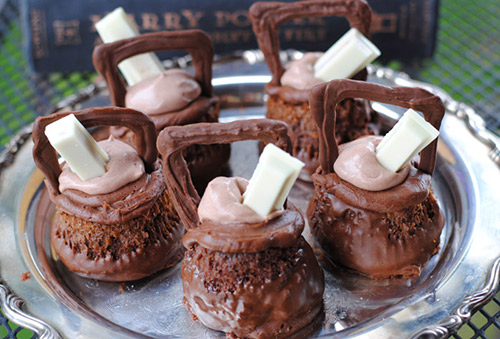 I hope this recipe fills your homes and your tummies with a delicious piece of the magic that is found at the Wizarding World of Harry Potter at Universal Studios Hollywood. When you're ready to compare our version of the Harry Potter Cauldron Cakes to those you can find at Honeydukes, give us a call at 855-GET-AWAY or check out our packages online. Whether you're making The Wizarding World of Harry Potter part of your Southern California vacation, or want to make it a getaway in and of itself, we would love to help you get there. 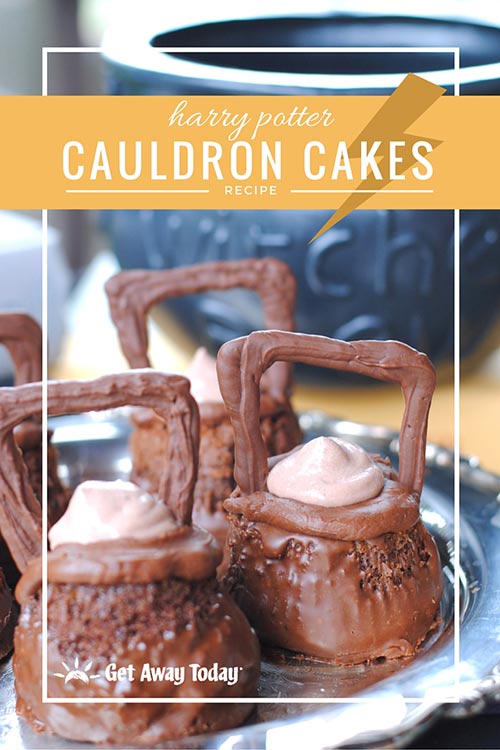