There are some attractions that will live on forever and "it's a small world" in Disneyland is one of them. We have 10 fun facts about the iconic ride that still inspires families every single day. 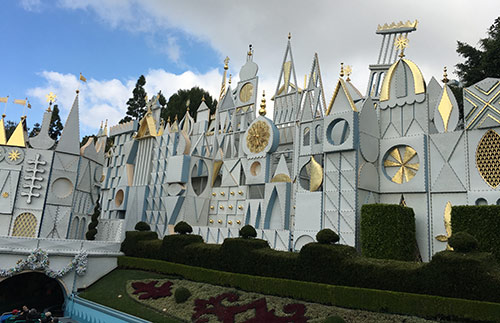 The 1964 New York World’s Fair was a shining moment for Walt Disney and Disneyland. It provided opportunities to create brilliant attractions that exist to this day. The fair also provided funding for Walt Disney Imagineering which led to the development of new vehicles and showmanship that hadn’t been seen before.

One of those new developments included the OmniMover, a ride system still used in iconic attractions like the Haunted Mansion and the Little Mermaid. It also included water driven vehicles like the boats found in the Pirates of the Caribbean attraction. On top of funding, the Walt Disney Company was also hired by many U.S. companies to build pavilions, including:

Each of these World’s Fair pavilions provides fond memories of the past. However, it was the “it’s a small world” attraction that was one of the most popular at the 1964 New York World’s Fair. This pavilion, originally called “Pepsi-Cola presents Walt Disney’s ‘it’s a small world’ – a salute to UNICEF and all of the world’s children,” inspired fair-goers to remember that we are all truly the same. It pulled from cultures around the world and was no surprise when the ride became a permanent attraction at the Disneyland Resort.

To this day, “it’s a small world” is a living time capsule, showcasing lands from over 50 years ago while providing a glimpse of a future where we all work together. A pattern of art deco, emerging technology and focus on children of the world can always be found. No matter how you say it – hello, aloha, hola, ciao – you’re sure to feel welcomed within every country you encounter. To celebrate the ride we all know and love, we’ve gathered 10 fun facts about “it’s a small world” in Disneyland.

10 Fun Facts about “it’s a small world” in Disneyland:

1. “it’s a small world” – the song. Everyone knows the words to this song. It’s a joyful melody that repeats as you sail your boat through the countries of the world. The song was written by Richard and Robert Sherman, the famous duo that contributed to many Disney movies and attractions. The song plays well over 1,000 times during a typical operating day at “it’s a small world” in Disneyland. It’s truly a magical song when you realize that it was created to be easily translated into any language, becoming another world-unifying effort of the attraction. Did you know that, since the opening of Disneyland Paris, “it’s a small world” is being played somewhere in the world every minute of every day?

2. Identical dolls. There are over 240 animated figures in “it’s a small world” in Disneyland. The majority are children and their faces were created to be identical. While the attire, skin color and location may change, the attraction reminds us that we are all the same in some way.

3. Disney characters. At the beginning of 2009, renovation was completed on “it’s a small world” in Disneyland. Along with updated technology and props, some iconic Disney characters were placed among the scenes of the world. Each appears in the land where their respective movie was set. Try to find them all on your next trip, including:

4. Whimsical details. Mary Blair was the design genius behind “it’s a small world” in Disneyland. Walt loved her playful style and the fun details that she brought to each aspect of the ride. There’s something new to see every time you ride, but we personally love these fun details the most:

5. Water from the Seven Seas. When “it’s a small world” moved from the World’s Fair to Disneyland, Walt wanted to create a special celebration. He invited children from around the world to come in their traditional garb and bring a vessel containing water from the nearest sea. Combined, the children contained vials from each of the Seven Seas. As they commemorated the opening of “it’s a small world” in Disneyland, the children poured the water into the ride’s river, symbolically uniting the world.

6. The moon and sun. The lyrics that play through “it’s a small world” in Disneyland suggest that we all live on one planet, under just one moon and one golden sun. To enhance this idea, a moon and sun has been placed in each area of the world that you voyage through on the ride. It’s meant to imply that no matter where you are in the world, you’re under the same moon and sun as everyone else.

7. “it’s a small world” Holiday. During the Holidays at the Disneyland Resort, “it’s a small world” transforms. Extra lights, music and magical touches make it a fan favorite during the festive celebration. You’ll notice a new scent of peppermint and pine as you voyage through the world. There’s also a Christmas tree in England that’s decorated with over 150 candles. The mermaids sing about dashing through the foam. The finale becomes a winter wonderland with all the children dressed in white and giant displays of a snowman. The only thing that can top the holiday overlay inside the ride is the holiday façade on the attraction’s building. Over 50,000 holiday lights are used to make “it’s a small world” in Disneyland even more magical than before! 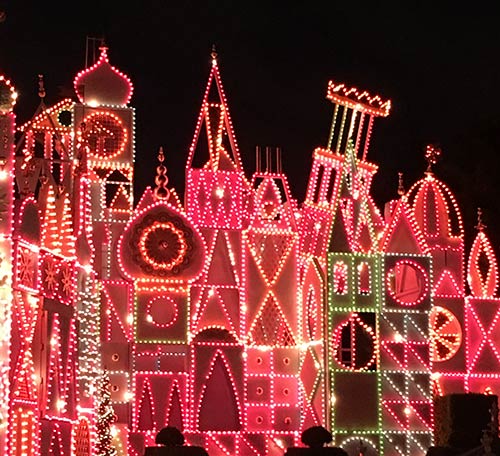 8. The clock. This may be the most amazing clock in the world. The clock that stands in front of the “it’s a small world” façade is a living clock, meaning it comes alive every 15 minutes. At each 15-minute mark, the door open and the children of the world dance to celebrate the time. If you’re standing in line for the attraction, keep an eye out for the two jesters that appear to announce the time of day before each small celebration. During the holidays, a special projection will reveal even more magic behind the clock each time it comes alive. 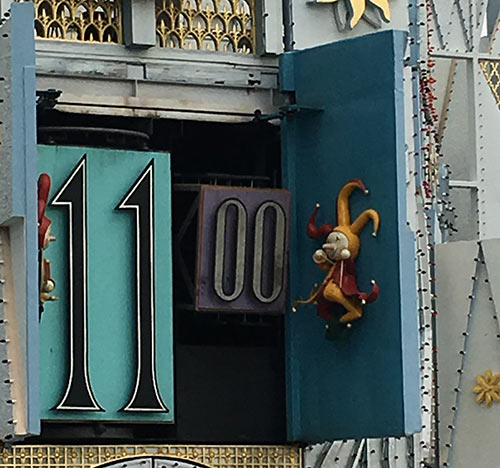 9. The skyline. Walt Disney wanted to make every party of Disneyland special, often adding small, but dazzling details to do so. For “it’s a small world,” he proposed that the weather vanes and tops of the attraction be covered in real gold. If you look closely at the skyline of “it’s a small world,” you’ll notice many of the world’s icons emblazoned and white and gold. It’s another ode to the peace and joy that the world’s children hold in their hearts.

10. Living sculptures. Through the grounds of “it’s a small world” in Disneyland, you’ll notice topiaries. There are several animals, fish and Disney characters adorning the happiest cruise on earth. Not many people know this, but it takes over five years to grow just one of the living sculptures. It goes to show just how much care that Disneyland puts into every single detail. 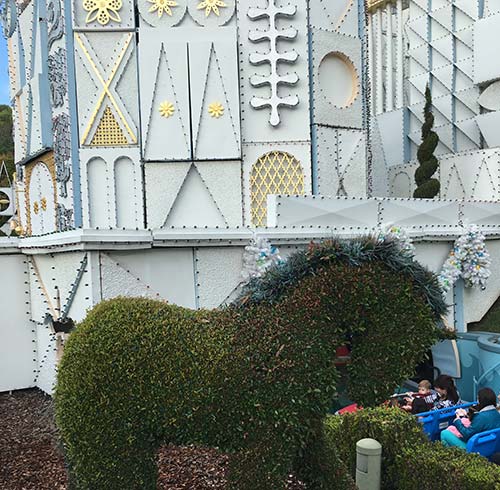 These are only a handful of fun facts about “it’s a small world” in Disneyland. We notice something new every time we ride, whether it’s a new character or worldly details. One thing that always remains the same is the peace, joy, happiness and reminder of childhood that the attraction stands for. It’s a magical story book that reminds us that world peace is possible if we all work together. After all, we are the same one way or another.

Are you wishing you were on “it’s a small world” in Disneyland right now? While we can’t transport you there right away, we can help you plan your next trip. Your wallet will be more than delighted by our discount Disneyland tickets and reduced hotel rates while your heart will be jumping for joy that Disneyland is finally on your calendar. Book any of our Disneyland packages online or give our agents a call at 855-GET-AWAY.

Check out these other great articles:
14 Secrets of Disneyland
9 Fun Things to do at Paradise Pier in Disney California Adventure
11 Buena Vista Street Disneyland Secrets

Chris Dallin is a Disneyland fanatic. He travels to Disney Parks several times a year and continues to find hidden gems, adventure, joy and magic in the Happiest Place on Earth. Tune into future blogs for additional ways to experience the magic of Disney Parks. 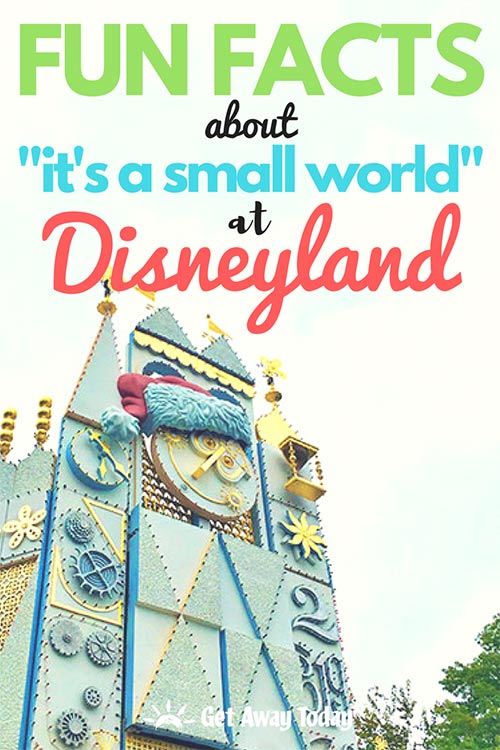