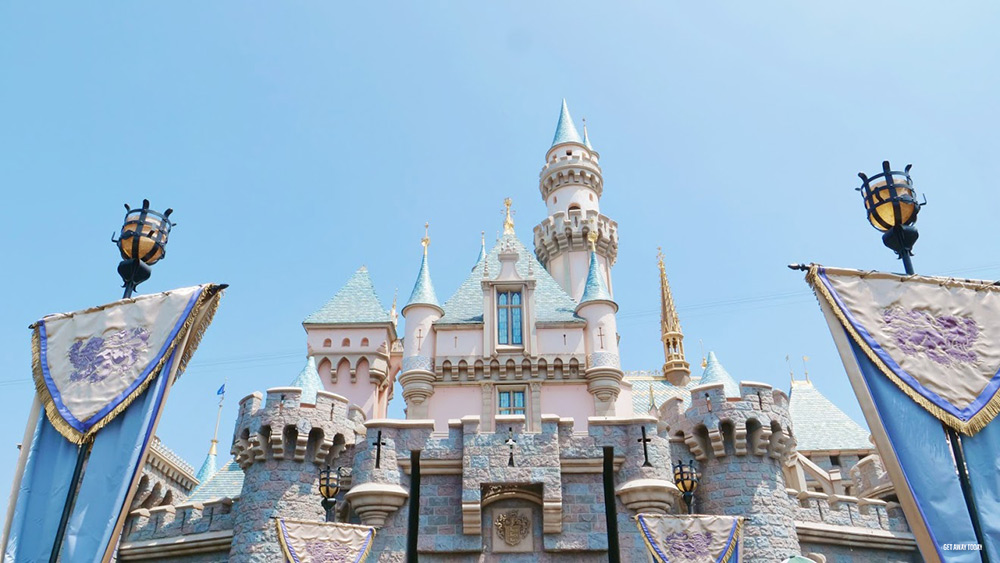 The Disneyland Resort is known for so many things, from being the Happiest Place on Earth to helping families create memories that will last a lifetime. One of our favorite things about Disneyland is how much attention they pay to the details. Not only do they put a lot of thought into the smallest of details, but there’s usually a history behind their design decisions.

Each of these secrets of Disneyland alludes to the history and events that shaped the park to be what it is today; a home for the child in all of us. We hope the list sparks a memory or two for you, whether it’s the joy of walking down Main Street U.S.A. or the sounds of your favorite ride. Here are 14 secrets of Disneyland that are easy to miss:

1. A half red and half white light at the Coca-Cola Refreshment Corner.  Near the end of Main Street U.S.A., Coca-Cola Refreshment Corner is a reminder of America’s early pharmacies. Known as Coke Corner for short, the quick service restaurant reminds people of the pharmacies that featured soda fountains, where families and friends gathered together for a treat. The signs for this corner are decorated with alternating red and white lights. But what happens when the lights do not match up just right?  When you’re Disney, you just create a light that features both colors! Look closely for this half red and half white light in the corner of Coke Corner’s alcove. 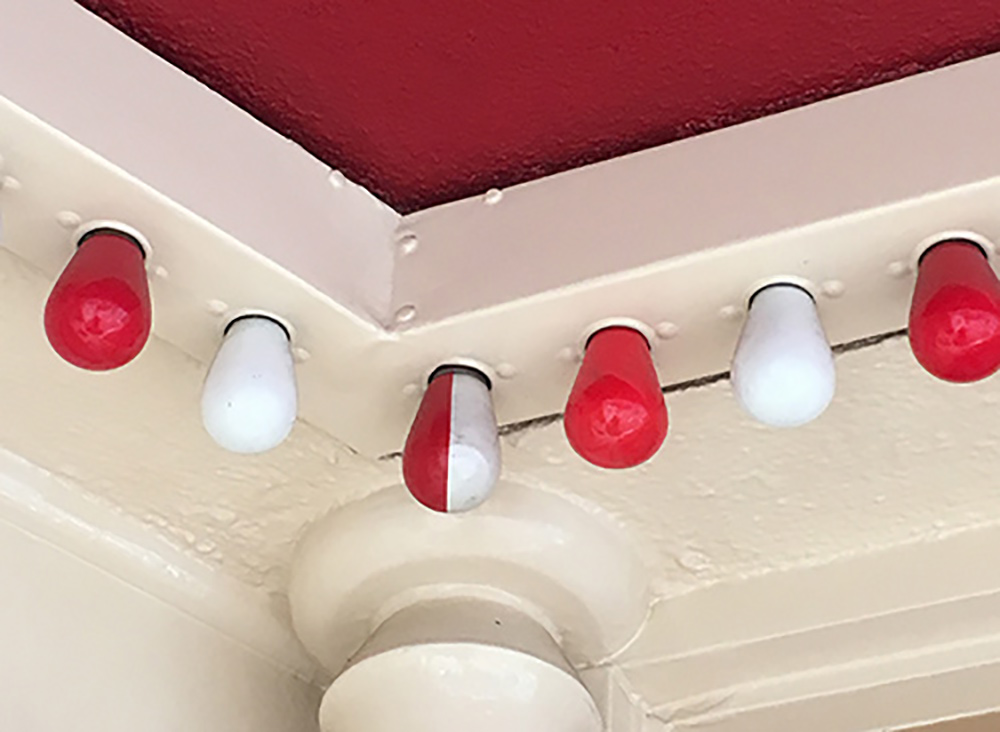 2. A Coca-Cola bottle museum. A window near the Coca-Cola Refreshment Corner houses one of the secrets of Disneyland. Here, you can find the progression of Coca-Cola bottles throughout history. Since Disney makes sure to honor the history of one of its top partners, it really is no wonder that the Coke in Disneyland tastes better. 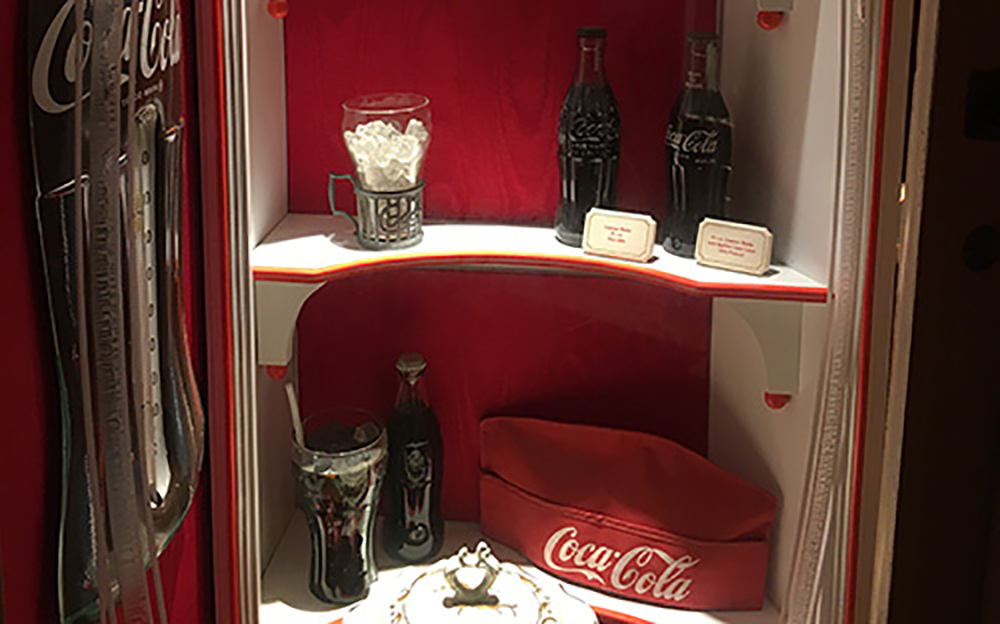 3. Fire company logos. New Orleans, Louisiana has an exciting history. Walt Disney wanted to capture the excitement and lore of the French Quarter in the Disneyland Resort. He opened New Orleans Square on July 24, 1966 and even had the mayor of New Orleans cut the ribbon. You’ll find many of the secrets of Disneyland within the corners and crevices of New Orleans Square. One such secret has to do with the fire companies in early New Orleans. During this time, different fire companies offered fire suppression services and would charge residents and businesses to fund operations. Fire brigades knew that a building had paid its fees based upon the fire logo that was placed on the building. Look closely, nearly every building in New Orleans Square has a different fire brigade logo. How many can you find on your next trip to Disneyland? 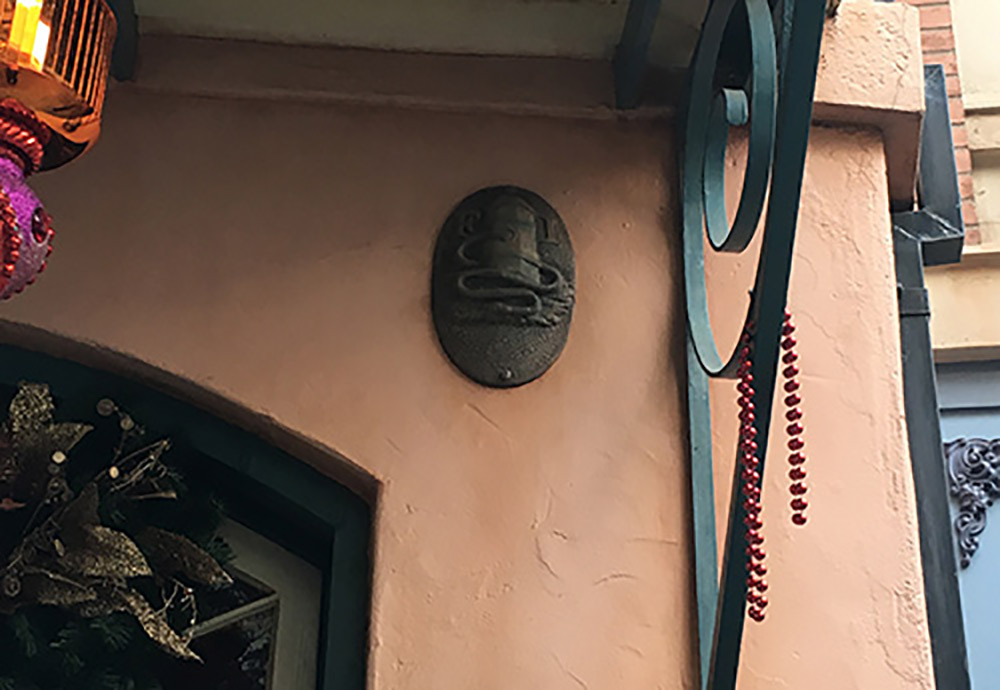 4. Jack, the pirate monkey. Near the exit of the Pirates of the Caribbean attraction is a gift shop called Pieces of Eight. The shop is named after the Spanish currency popular during the heyday of pirates and explorers. While in Pieces of Eight, take a look at the chandelier. You’ll find a monkey resembling Jack the Monkey from the Pirates of the Caribbean movies. One of the secrets of Disneyland is that this chandelier monkey actually inspired the character in the movie, three-corner hat and all. It’s always neat to see what inspiration Disneyland took from the classic movies and what inspiration the park gave to the newer movies! 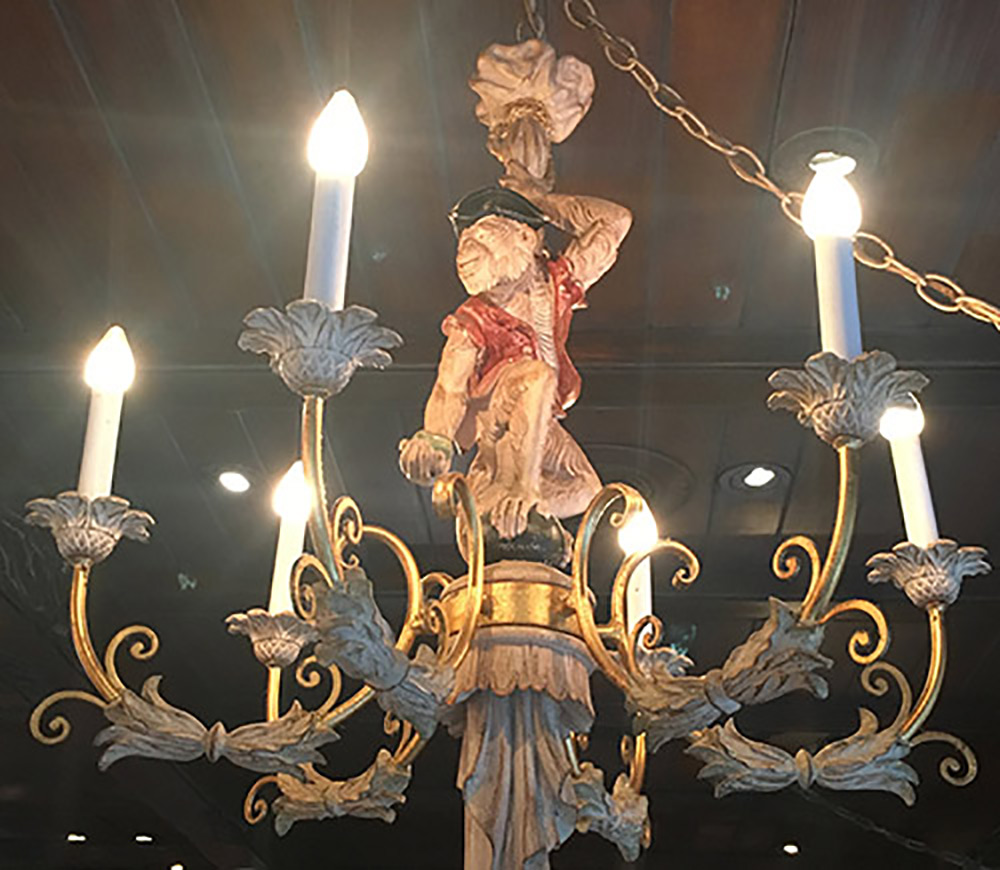 5. A “test” wall of bricks. While Disneyland was being built, bricklayers tested a wall to see what kind of pattern Walt would like best. The wall and its different patterns still stands in the park today. While walking from the train station to the castle, take a right onto Center Street from Main Street U.S.A.. The wall is located near the lockers at the end of the street. Take a picture on your next vacation and see if your friends can guess that this is one of the secrets of Disneyland! 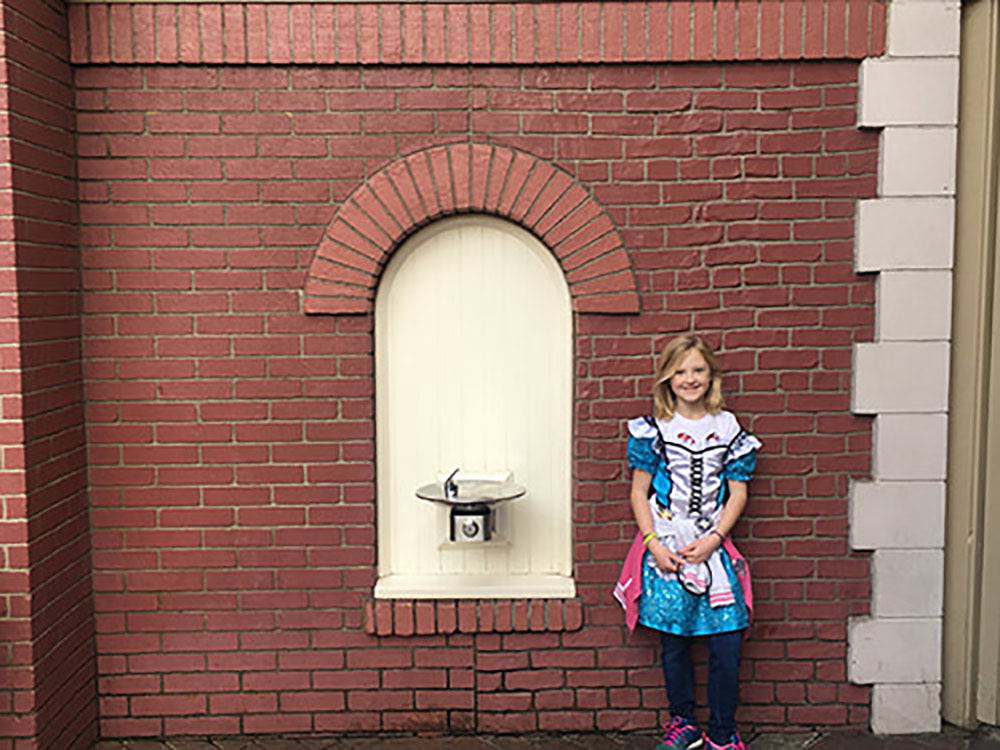 6. The Darlings on the Lost Parents sign. A little irony can be found near City Hall. There’s a sign for parents who may have lost track of their little ones in the park. This sign features the Darlings, the parents looking for their children who had flown to Neverland with Peter Pan. It is comforting to know that if families get separated for any reason, you can tell everyone to meet up at City Hall. 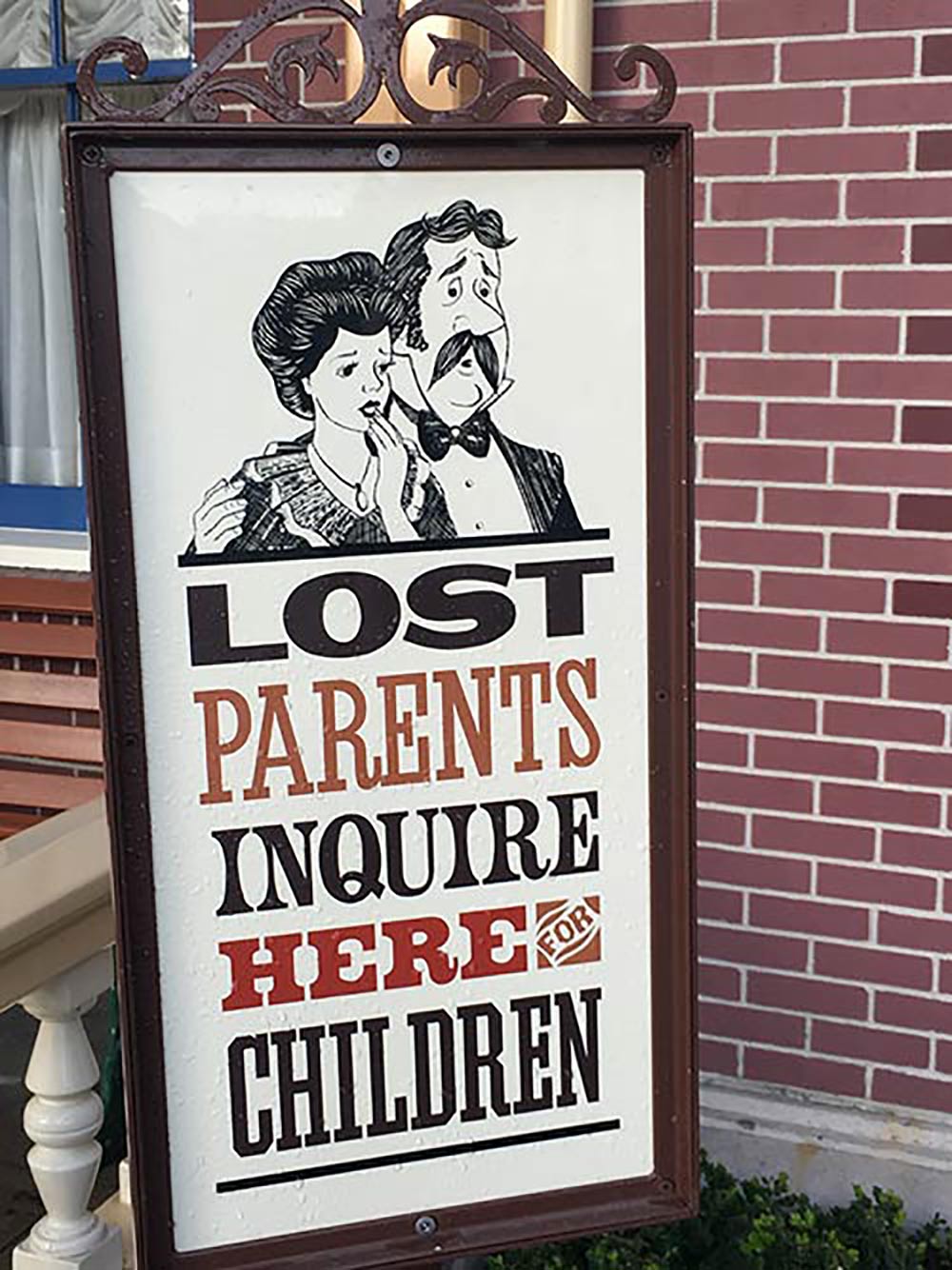 7. The Penny Arcade building. Main Street U.S.A. in Disneyland honors America during the early 1900s. It was an exciting time in American history; the Industrial Revolution was in full swing and Americans were switching from the horse-drawn carriage to the horseless carriage. There are so many secrets of Disneyland hidden along the popular street. One of our favorite secrets of Disneyland is the Indian Head One-Cent Piece above the Penny Arcade sign. That penny is dated 1901, the year that Walt Disney was born.

8. A hidden bookcase. There is a hidden bookcase in City Hall. On your next visit to the hub of the park, you can find titles with references to favorite Disney attractions here. Walt and You is our favorite! 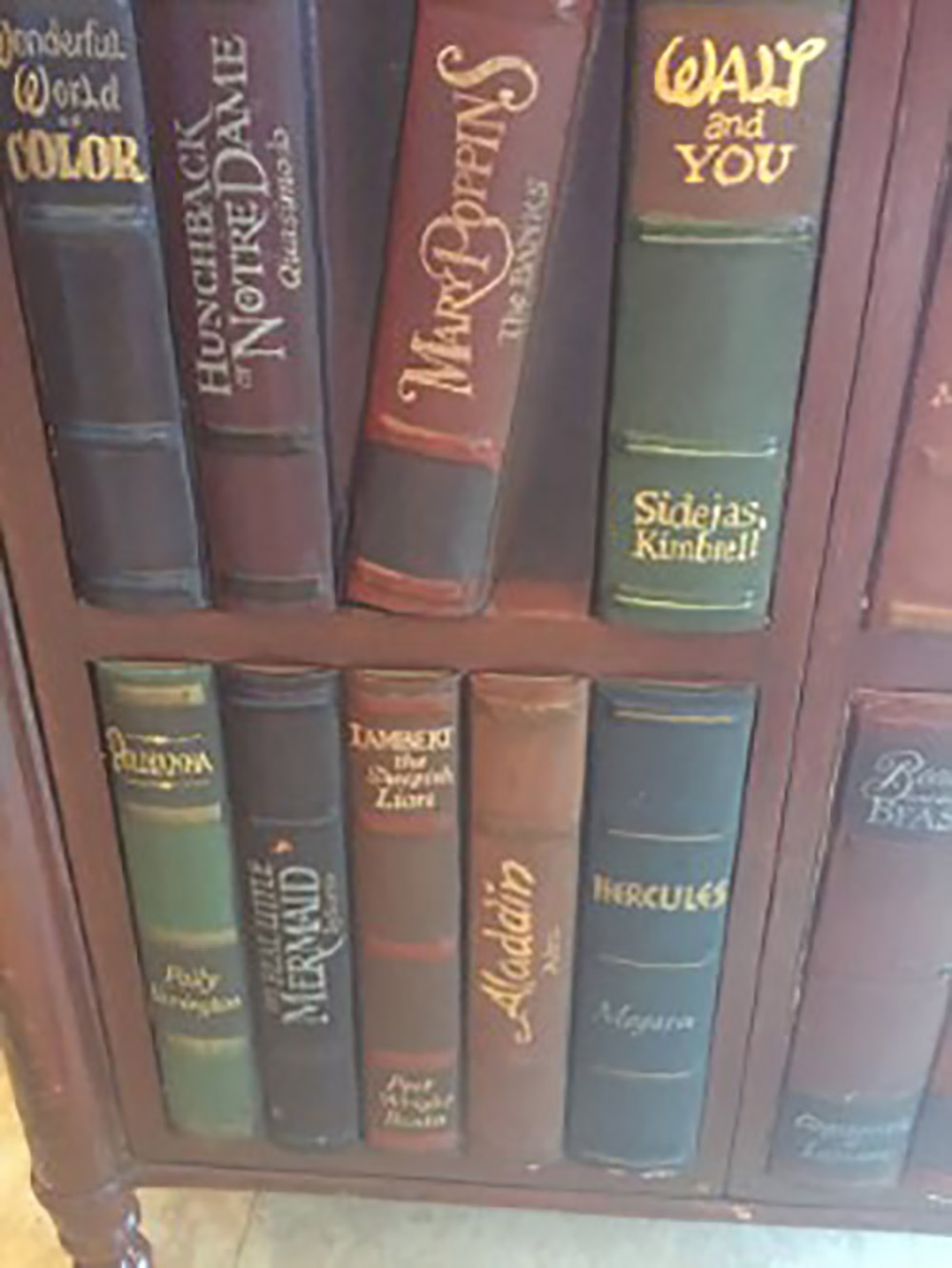 9. Streets made of music. As you travel through Toon Town, look for the man hole cover pictured below. When you jump on this particular cover, make sure to listen for a fun surprise! 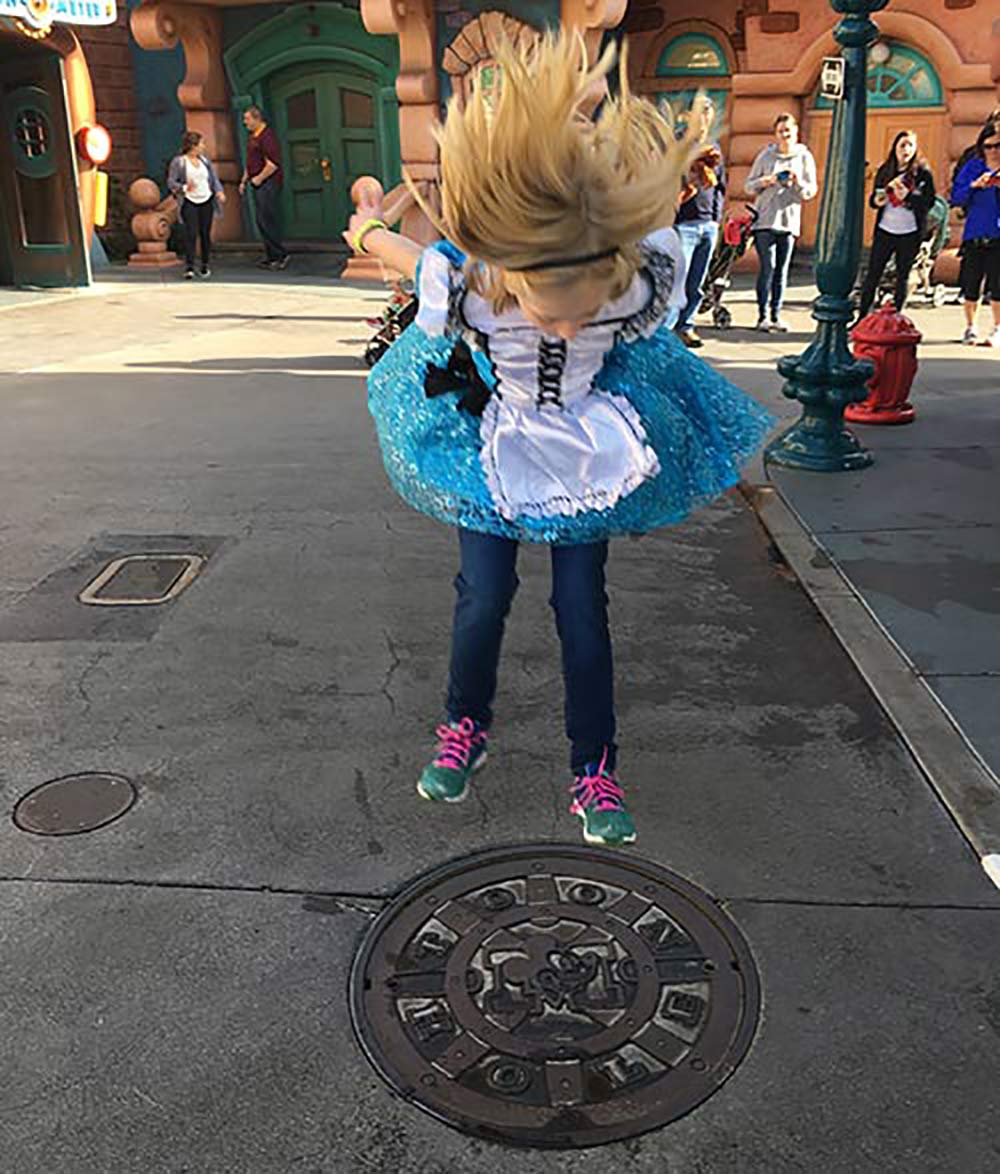 10. The Little Man of Disneyland. After the Disney Company purchased an orange grove in Anaheim and announced their plans to build Disneyland, Disney created a Golden Book to tell the story of the changes coming to the area. The Golden Book tells of a little leprechaun who created a home in the orange grove and has to adapt to the changes. You can still find the Little Man of Disneyland’s home in the park today. Head towards Adventure Land and keep your eyes open as you approach the tree to the right of Indiana Jones Adventure. 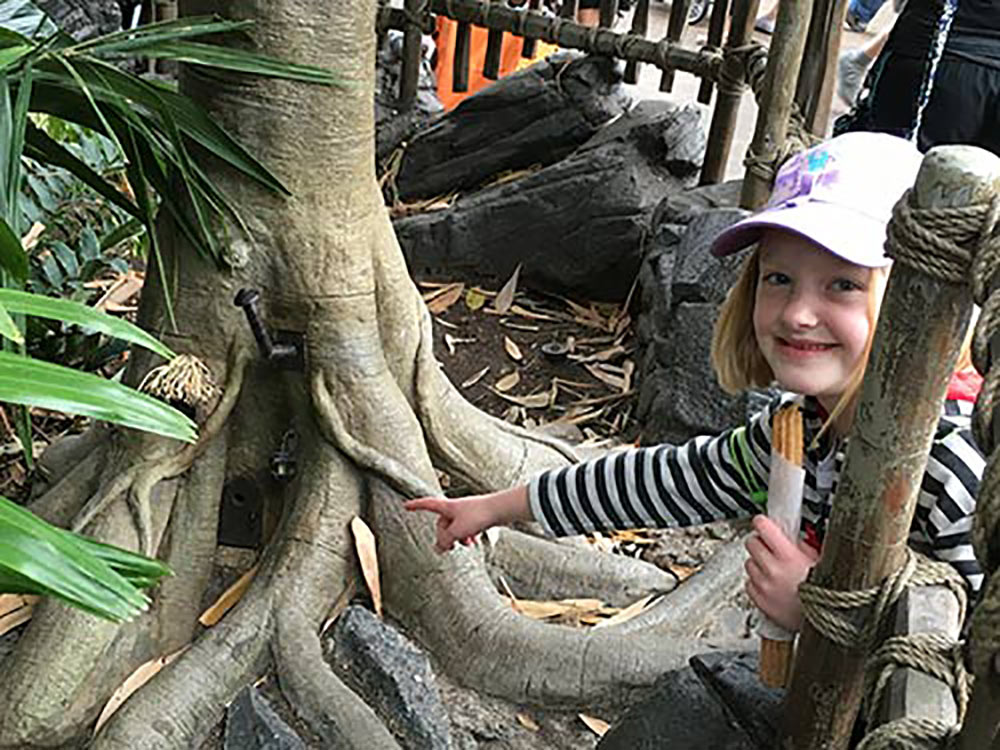 11. Beautifully painted mirrors. Hidden in an alcove of New Orleans Square is a very unique perfume shop, Mademoiselle Antoinette’s Parfumerie. There are beautiful mirrors within the shop that have been painted meticulously with a process called reverse painting. You can find flowers, birds, butterflies and more detailed throughout the mirrors of the shop. The artist who finished the painting was Glendra Von Kessel and her signature can still be seen on the beautiful piece. One of the our favorite secrets of Disneyland is that you can have a cast member custom paint your very own perfume bottle here. Talk about a unique Disneyland souvenir!

12. Lively phone conversations. You will find several old-fashioned phones throughout Disneyland. If you pick these up, you may just find yourself listening in on a conversation from the 1900s or your favorite characters. The Main Street U.S.A. and Toon Town phones are our favorites! 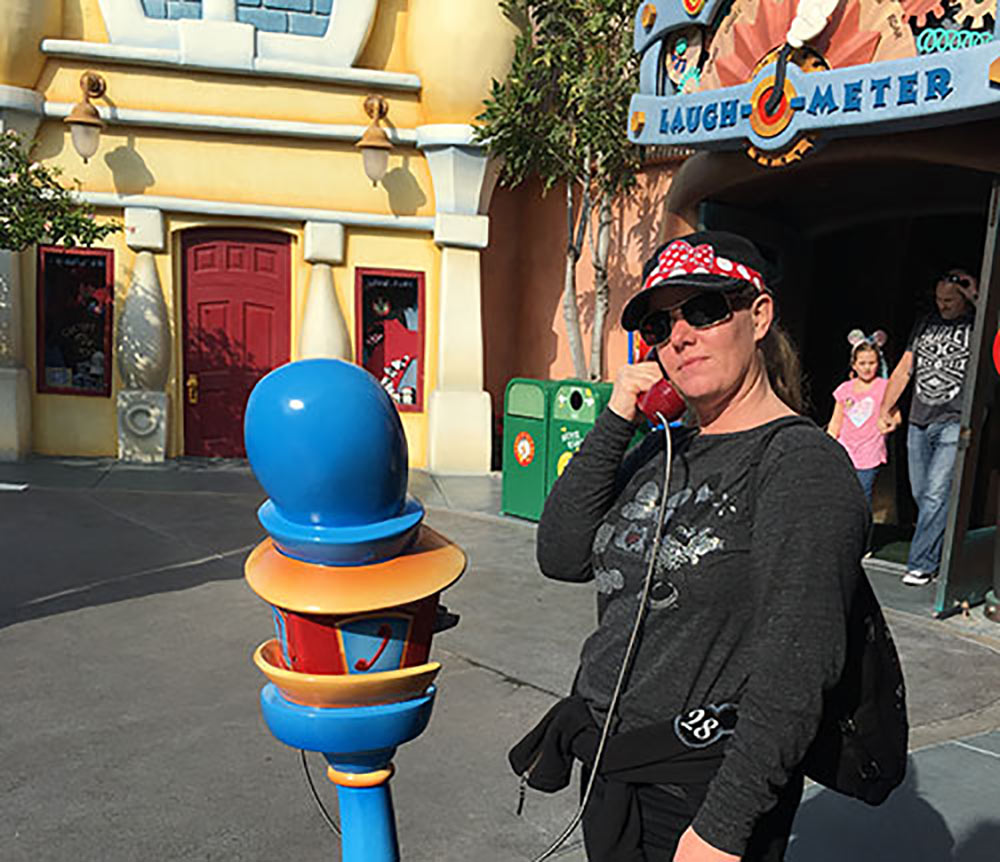 13. Unique roses. It’s widely known that Disneyland employs some of the most talented gardeners available. Not many people realize one of the secrets of Disneyland is that that the park has had roses genetically developed to be unique to the park. The official flower of Disneyland, called the Disneyland Rose, can even be purchased for your home garden at the Jackson & Perkins nursery in South Carolina.

14. The Partners Statue. The statue, found at the center of Disneyland, is an homage to Walt Disney and Mickey Mouse. Look closely as there are a few of the secrets of Disneyland on the beautiful statue. The first is that Walt is pointing with two fingers; it is a Disney policy to never point with just one finger as it is considered rude in many cultures. Notice the Irish wedding ring on Walt’s right ring finger – those are rings he and his wife Lillian wore in addition to their regular rings. Lastly, look for Walt’s tie tack. It is the logo for Smoke Tree Ranch, where Walt and his family used to visit to get away from the demands of the movie and theme park business. We’ve always known that Walt valued family time and the quote at the bottom of the statue couldn’t reflect that more: “I think most of all what I want Disneyland to be is a happy place… Where parents and children can have fun, together.” 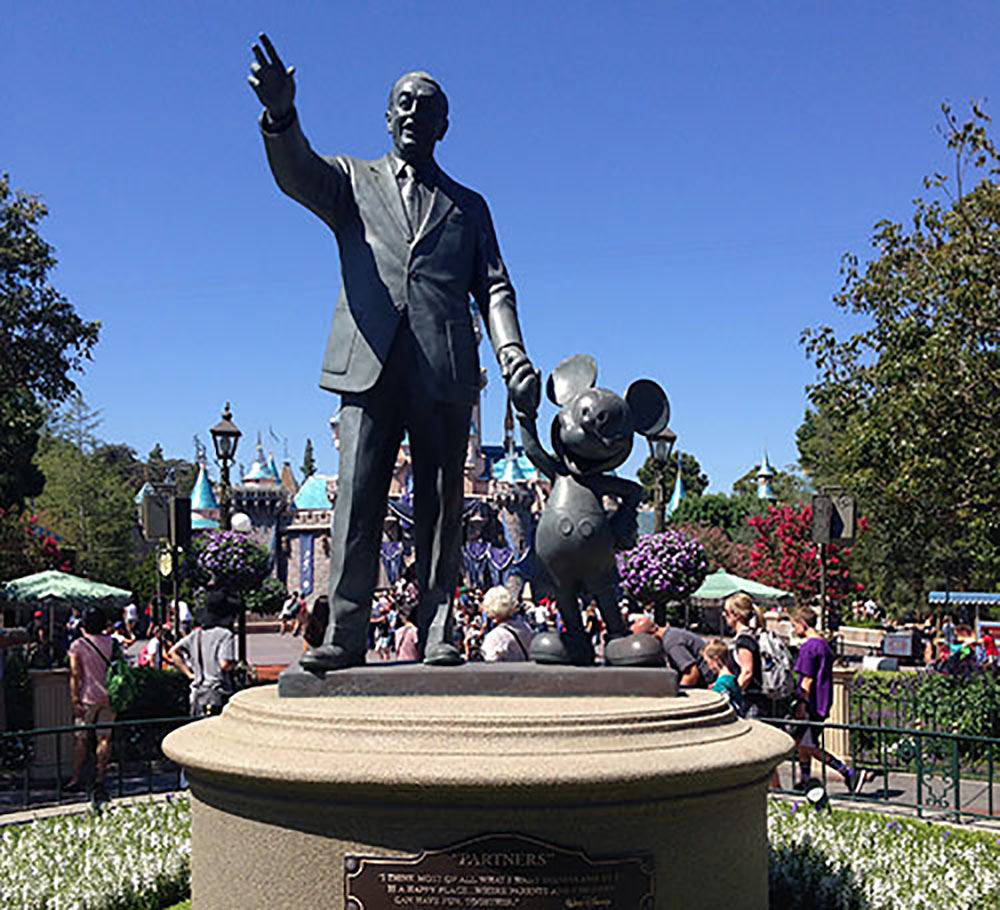 The Disneyland Resort always pays attention to the details, which is why there are so many secrets of Disneyland. The next time you visit Disneyland, keep your eyes open – you may be surprised at what you find!

Just like Disneyland, we love to pay attention to all the details. Of your vacation that is! You can book any of our Disneyland packages online or over the phone at 855-GET-AWAY. With discount Disneyland tickets, reduced hotel rates and insider tips, you know you’re getting the best price and best service. 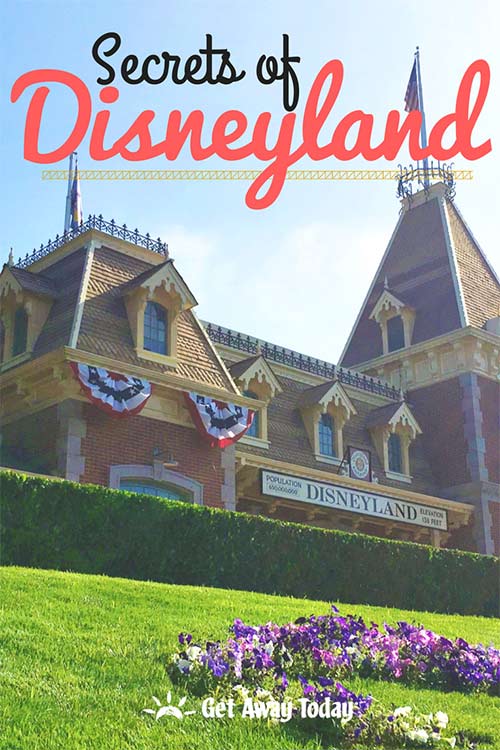 Anonymous- What a fun memory to have! So glad to hear you took time to look for hidden gems around Disneyland.

I love this! When we went with all our children & grandchildren the night before in our hotel room - I read them the Golden Book of The Little man of Disneyland. And the next day we had so much fun searching for his tiny home! What fun secrets! Thank you!

Amazing! As an original Annual Pass Member, I still didn't know about any of these! Fascinating.