Pirates of the Caribbean in Disneyland is arguably one of the most popular theme park attractions in history. Find out 12 fun facts you never knew about the ride – just in time for it to reopen on June 8th! 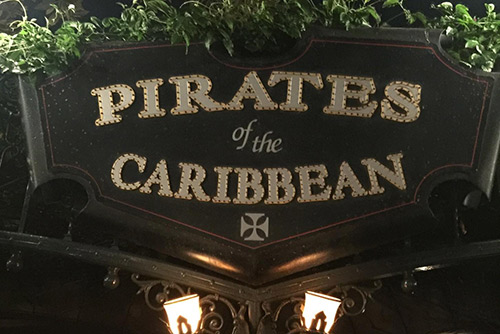 “Psst! Avast there! It be too late to alter course, mateys—and there be plunderin’ pirates lurkin’ in every cove, waitin’ to board. Sit closer together and keep your ruddy hands inboard—that be the best way to repel boarders. And mark well me words, mateys… dead men tell no tales!”

On June 8th, the Pirates of the Caribbean in Disneyland will open once again with changes to meet modern culture - including FastPass kiosks! Walt Disney said that the park would never be complete as long as there is imagination left in the world. Walt’s comment has proven to be true as Disney seeks to improve the guest experience every day. Walt set an expectation that each Imagineer spend time at the park, in lines, listening to comments and understanding preferences.

These efforts continue to be part of the expectations today, driving frequent improvements and changes. For example, when Walt Disney heard a few comments from guests about how boring they thought the Jungle Cruise attraction was, the idea of jokes and new script points were added to change the experience. The addition completely changed the intent of the attraction which contributes to the fact that it continues to be a fan favorite today. We’re sure that the changes made to the Pirates of the Caribbean attraction will be just as great.

As we look forward to the reopening of Pirates of the Caribbean in Disneyland, enjoy these interesting tidbits about the ride and its history! 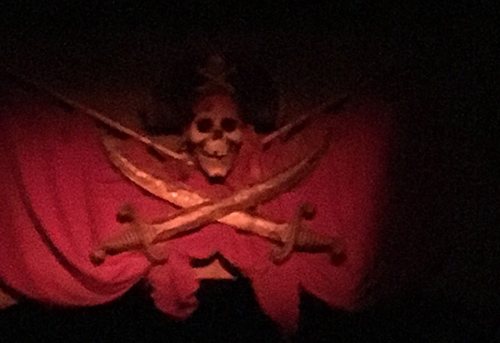 12 Fun Facts About the Pirates of the Caribbean in Disneyland

2. One of the featured pirate’s names can still be found on the attraction. Upon arriving to board your ship, guests enter from Laffite’s Landing. Laffite was a pirate that is an important part of the building of America. Laffite helped Andrew Jackson in the Battle of New Orleans. The efforts were so profound that songs have been written about the battle for control of the Mississippi River. Many musical artists have sung the venerable song The Battle of New Orleans. You may recognize the tune: “In 1814 we took a little trip, along with Colonel Jackson down the mighty Mississip!” The song was recorded in 1959, about the same time that Walt and the Imagineers started thinking about adding New Orleans Square and the Pirates of the Caribbean in Disneyland. 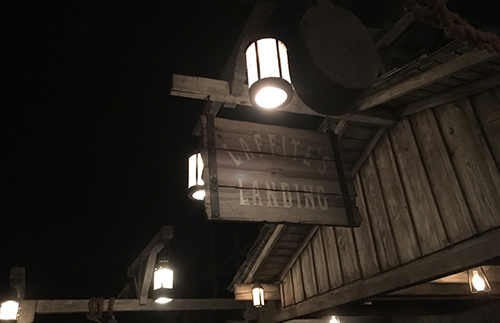 3. Really bad eggs! Pirates were never supposed to be friendly. Xavier Antecio (to Disney fans, he is simply known as X) was assigned to write the Pirates of the Caribbean song by Walt Disney. X had never written a song before he penned the famous song “Yo Ho, Yo Ho, a Pirates Life for Me!” X wrote the song to illustrate that pirates were a bad set of characters and guests should be a little scared of what they were going to experience. Some of the lyrics included:

“We pillage, we plunder, we rifle and loot.
We kidnap and ravage and don’t give a hoot.
We extort, we pilfer, we filch and sack.
Maraud and embezzle and even hijack.
We kindle and char; inflame and ignite.
We burn up the city; we’re really a fright.
We’re rascals and scoundrels.
We’re villains and knaves.
We’re devils and back.  We’re really bad eggs.
We’re beggars and blighters and ne’er-do-well cads.
Aye, but we’re loved by our mommies and dads.”

Ironically, the pirates have become fan favorites and endeared by many Disney fans young and old.

4. Handsy pirates change to hungry pirates. The original Pirates of the Caribbean in Disneyland features scenes with pirates chasing groups of scared townspeople. In 1997, Disney altered the scenes to feature the pirates chasing food rather than women. For example, where a pirate used to chase a scared woman, he is now being chased by the woman for stealing a pie. At the same time, illuminated "Exit" signs were added in the case of an emergency. The changes in the ride made audiences feel more comfortable, but did come with controversy. X was reported as saying, "They were meant to be pirates of the Caribbean, not Boy Scouts of the Caribbean." However, many now agree that the changes were appropriate and the ride continue to change to better mold with our society.

5. A Disney attraction spawns a Disney movie which changes the Disney attraction. The Pirates of the Caribbean in Disneyland led to the still-popular Pirates of the Caribbean movie series. And after such success, characters from the movie series – Captain Jack Sparrow, Davy Jones and Captain Barbosa – were added to the attraction. You can even find Captain Jack Sparrow and his pirates during Fantasmic! on the Rivers of America. 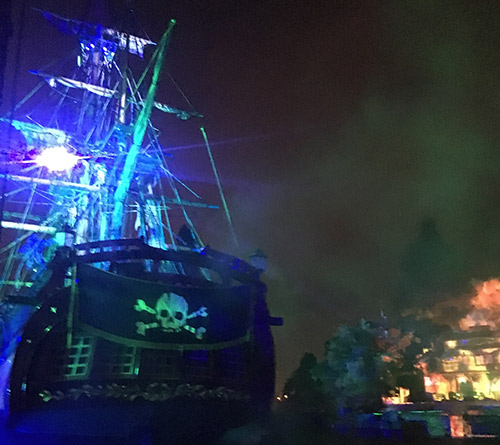 6. A light fixture inspired a movie character… Located near the exit of Pirates of the Caribbean in Disneyland is a gift shop that features an amazing desk themed after a pirate ship. Look up to find Jack the Monkey Pirate. Movie makers used the chandelier as inspiration for the famous character in the popular movies. 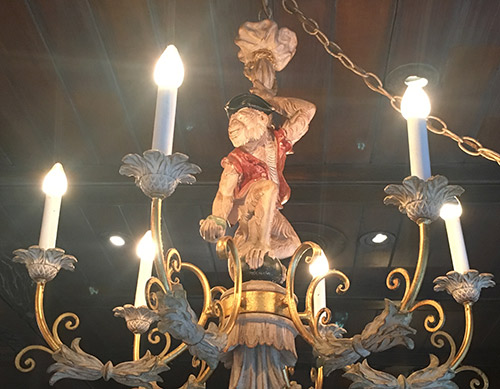 7. One fun place to dine!  The Pirates of the Caribbean in Disneyland offers one of the most unique and exciting places to dine, right inside the New Orleans Bayou. Make sure to get your reservations to the Blue Bayou early, the experience is unique and like no other. Pay particular attention to the fire flies, and the sounds of frogs and crickets in the background. You can even watch as unsuspecting guests enter the buccaneer world. 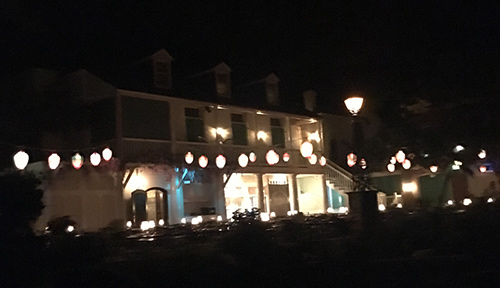 8. Hidden Mickeys can be found. Disney Imagineers have placed at least one hidden Mickey in each attraction throughout the park. The process of finding hidden Mickeys has fans scouting them throughout the park, often finding both intentional and unintentional ones! Look closely for them in Pirates of the Caribbean in Disneyland, as there are many to be found. You’ll especially want to look close as you travel up the waterfall. There will be a brass breastplate with a small Mickey hidden right in the middle. 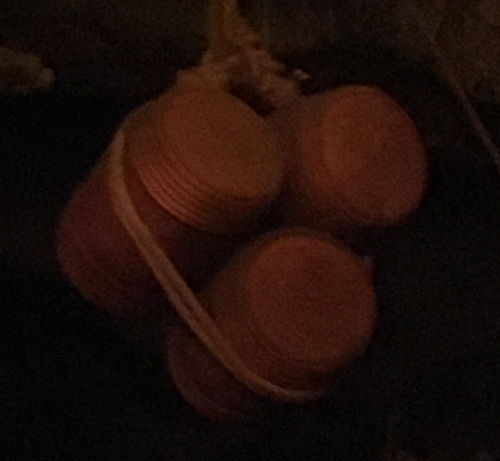 9. Is the pirate way of life too scary? Upon opening, the new Pirates of the Caribbean in Disneyland may have been just a little too realistic! The pinnacle of the attraction is that the salty old pirates light the entire town on fire making the structures appear unsafe and putting guests in peril on how to get out of the burning city. Soon after opening, the Anaheim Fire Chief thought that the attraction was really on fire! The concern created a safety measure that shuts down the fire effects should the fire alarm be activated.

10. Pirates, chickens, and animatronics, oh my! Did you know that the Pirates of the Caribbean features over 120 animatronics? See if you can spot them all on your next ride! From chickens, pigs, burros and pirates, the animatronics continue to offer a realistic experience. Disney creates different levels of animatronics to tell stories throughout the park. The highest level of animatronics at Disneyland can be found in the Native American Story Teller on the Disneyland Railroad, President Lincoln in Great Moments with Mr. Lincoln and the Auctioneer in the Pirates of the Caribbean. Fans are speculating that the update will feature an animatronic in the form of the “redhead” that will unveil new technology in animatronics. Fans can’t wait to meet her! 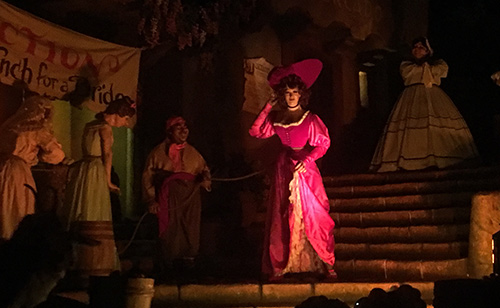 11. Anchors away outside the ride. Just outside the Pirates of the Caribbean is an anchor with historical detail and information. See if you can find it next time you visit! It’s just another way that Disneyland offers guests to learn about the past. It really makes Walt Disney’s original speech ring true: “Disneyland is dedicated to the ideals, the dreams, and the hard facts that have created America.” 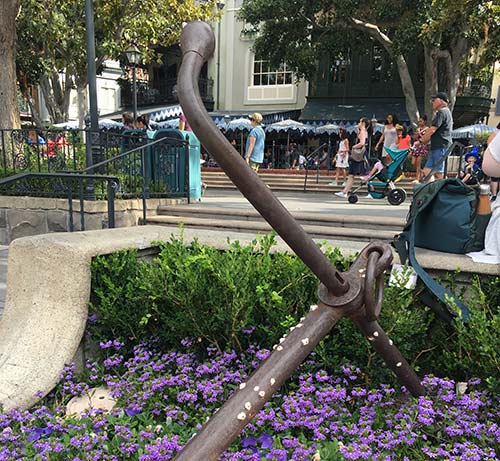 12. Pirates of the Caribbean opens again with an updated scene worthy of the famous Redhead! The popular scene featuring the famous redheaded gal will be one of the updates in the current refurbishment of Pirates of the Caribbean in Disneyland. The scene will feature the redhead as a pirate named Redd. She’ll be auctioning off the town’s most prized possessions and may just have a thing or two to say about the rum supply as well. The new pirate, and FastPass kiosks, will be featured when the ride reopens on June 8th.

It is so fun to walk through history and to be part of it as well. Disneyland is certainly preserving history while celebrating America’s modern culture. We're excited to see the updates that come to the Pirates of the Caribbean in Disneyland, both on June 8th and in the future. Make plans to see it for yourself!

Get Away Today will help you experience an amazing trip with your family, covering every detail for a swashbuckling time. We'll help with everything from your preference in accommodations, transportation, food and beyond. You can browse our discount Disneyland tickets and packages online now. Or, give our Disney experts a call at 855-GET-AWAY.

Check out more fun facts about the lands and rides of Disneyland:
Disneyland's Fantasyland: Secrets You Never Knew
12 Facts You Didn't Know About Rivers of America in Disneyland
14 Secrets of Disneyland
Chris Dallin is a Disneyland fanatic. He travels to Disney parks several times a year and continues to find hidden gems, adventure, joy, and magic in the Happiest Place on Earth. Tune into future blogs for additional ways to experience the magic of Disney Parks. 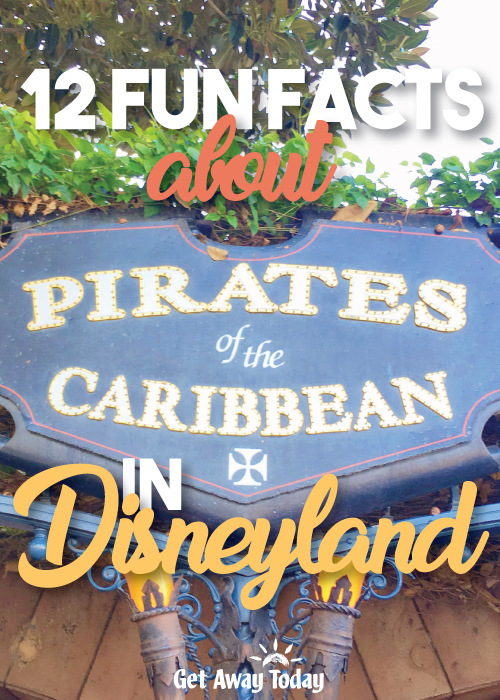