UPDATED FEBRUARY 2020 Find out everything you wanted to know about the iconic Disney California Adventure ride with our guide to the history, secrets and facts about Soarin’ Around the World. 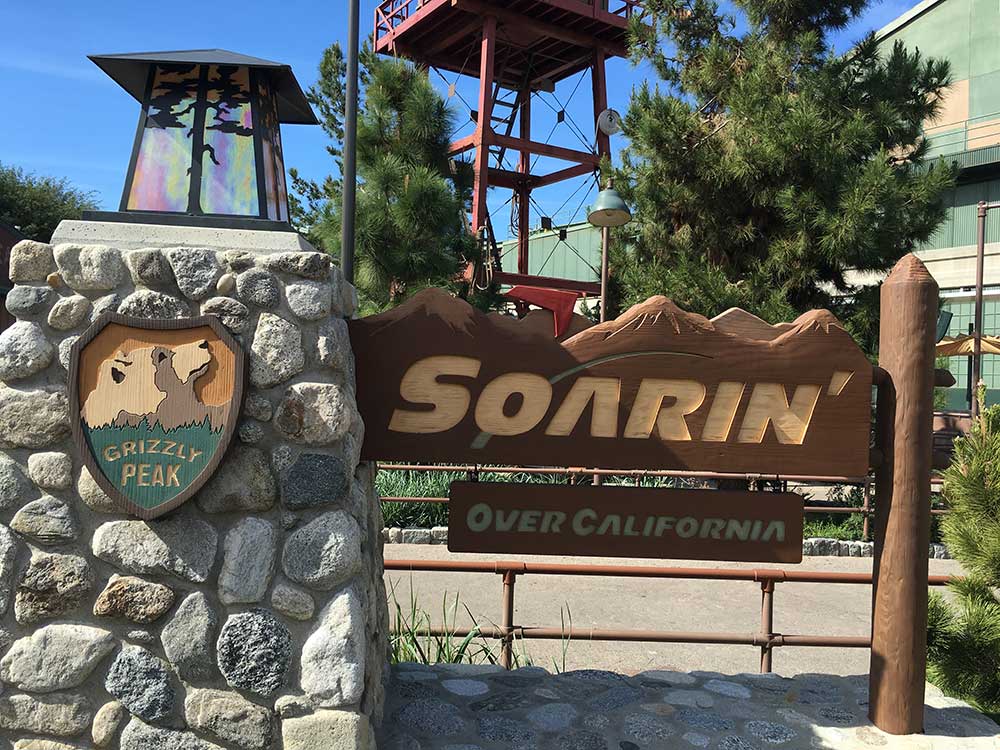 The Disneyland Resort decided to celebrate the beauty and majesty of the Golden State and began planning what is now known as Disney California Adventure Park. Construction began in 1998 and the park was completed in 2001. It detailed everything wonderful about California; from sandy beaches and piers, beautiful coastal redwoods and snowcapped mountains to early settlers looking for gold in the hills and the movies of Hollywood. Since opening in 2001, the Disney Park has made major changes like Buena Vista Street, Cars Land, Pixar Pier and others. Disney California Adventure still celebrates California, showcasing the 1920s (when Walt arrived), John Muir Redwoods, sourdough and chocolate factories of San Francisco, as well as the back lots of Hollywood.

One of Disney California Adventure’s early attractions continues to thrill adventurers. Soarin’ is not only one of the most popular attractions among Disney Parks, but continues to stand as an example of Disney’s attention to detail and the focus on fun and thrills. Join us today for a bit of the history, secrets and facts that celebrate Soarin’ Around the World.

10 Cool Facts About Soarin’ Around the World

1 - Condor Flats turns to Grizzly Peak airfield. Imagineers wanted a way to celebrate the beautiful vistas, the contrasts and the icons of California. Original lands that were created for Disney California Adventure Park included Grizzly Peak, Pacific Wharf, Paradise Pier and Condor Flats. The California Condor is certainly an icon of California, but the area was created to pay homage to the history of flight in California. In 2015, as part of the makeover of the park, the air field area was changed from a desert landing strip to a mountainous area that themes nicely with Grizzly Rapids. You’ll still find plenty of references to aviation, including an airplane hangar and the Flight Jumper Café. 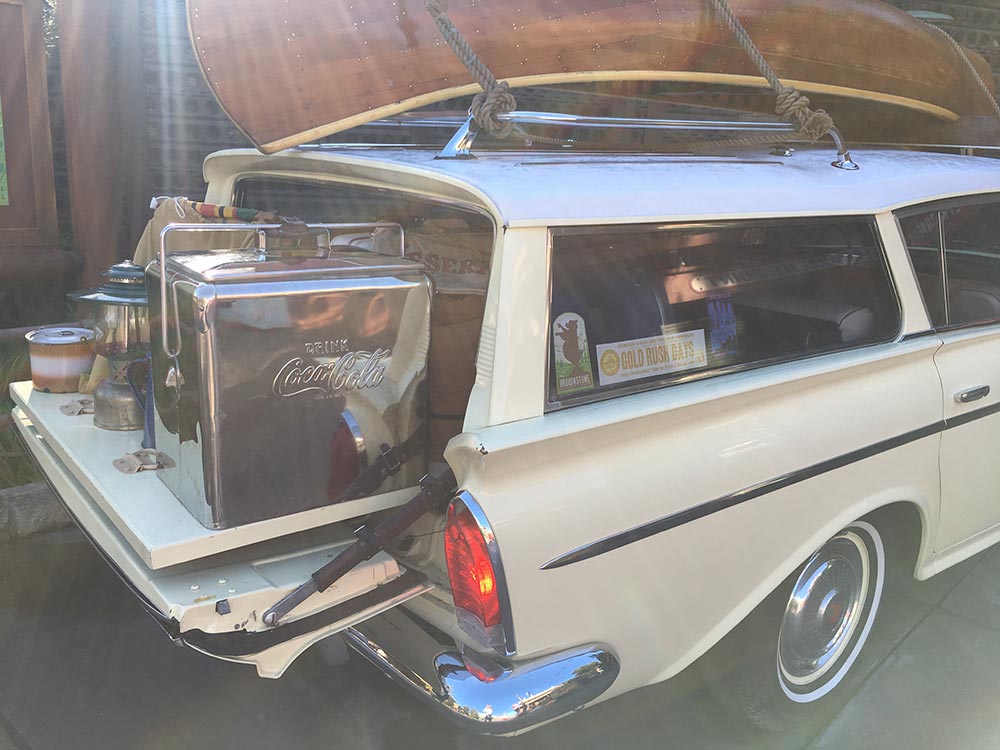 2 - How Soarin’ came to be. Disney didn’t want to just celebrate California but allow guests to experience flying over the state’s vistas and venues as well. They had created similar attractions in the past, like Mission to the Moon in Disneyland that allowed guests to experience their own astronaut adventure. Or, “Circlorama”, which let guests experience all kinds of journeys with a 360-degree vision of their escapades.

The Disney Imagineers were excited about providing a “hang gliding experience” over California. Originally named “Ultraflight,” the attraction was halted because a ride system could not be developed. Taking the opportunity back to his roots, Disney Imagineer Mark Sumner remembered spending time in his parent’s attic with his childhood erector set and with some old parts, some string and a lot of vision, developed the ride system that guests experience every time they ride Soarin’ today.  The message here could be to keep playing with those erector sets and Legos!

3 - Soarin’ switches from “Over California” to “Around the World!”  As part of the entire reimagined Disney California Adventure Park, the sights and smells of the Golden State switched to world icons in 2016. Disney fans will be excited about the homage to Disney icons as well, including a flight over the Neuschwanstein Castle in Germany, the inspiration for Sleeping Beauty’s Castle, and the Matterhorn in the Swiss. Check in for your flight to see some of the world’s icons waiting for you for your next visit. 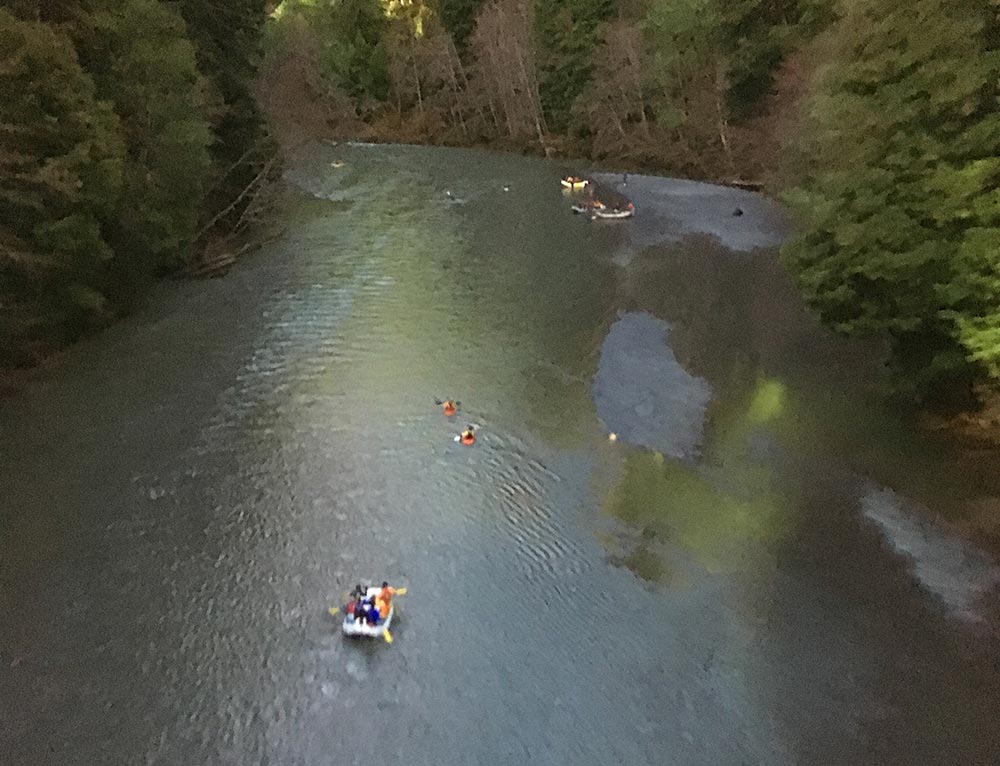 4 - Iconic music. Jerry Goldsmith, one of the most recognizable film score artists, created the sound track for Soarin’ Over California. Disney fans will also recognize his work in the animated film Mulan. Many people attribute the success of Soarin’ to Goldsmith’s memorable and majestic music. Goldsmith is also known for his work on memorable movies like Rudy, Star Trek: The Motion Picture and the Secret of NIMH.

5 - The smells and the magic of Soarin’. A large part of the Disney ethos is ensuring that families have fun together and that details are part of the guest experience.  Walt Disney started a phrase that is used often in planning specifics. Walt coined the term “plus it”. That is to say that Disney Imagineers make the newly formed attraction as great as it can be and then ask themselves, how do we plus it? Meaning, what extra item or theme can we add that will make the attraction better? Anyone that has strapped into the Soarin’ experience will tell you that the “experience is so real!” Not only does the flight simulator-like mechanics move guests about the scenery, but air fans simulate the air swooping past the guests as they glide over the world. Disney Imagineers completed the “plus it” requirement by adding smells that only make the experience feel even more real.

Fans of Soarin’ Over California know about the smell of the ocean, the pine tree forests and the orange groves. Soarin’ Around the World added even more olfactory opportunities that will leave you wanting more. Take in a whiff at every turn and catch the smell of roses over India, the smell of dirt and grass in Africa and more.

6 - The Aviation Hall of Fame in Soarin’. The history and lore of California is equally celebrated at the Disney California Adventure Park. As you know, California is home to many creative minds that with many accomplishments. Stars on the Hollywood Walk of Fame archive many in entertainment in the realms of radio, film and television. In a similar fashion, many luminaries of flight have made California home. People like Amelia Earhart, Donald Dougla, Howard Hughes, Charles Lindbergh and even modern minds like Elon Musk. 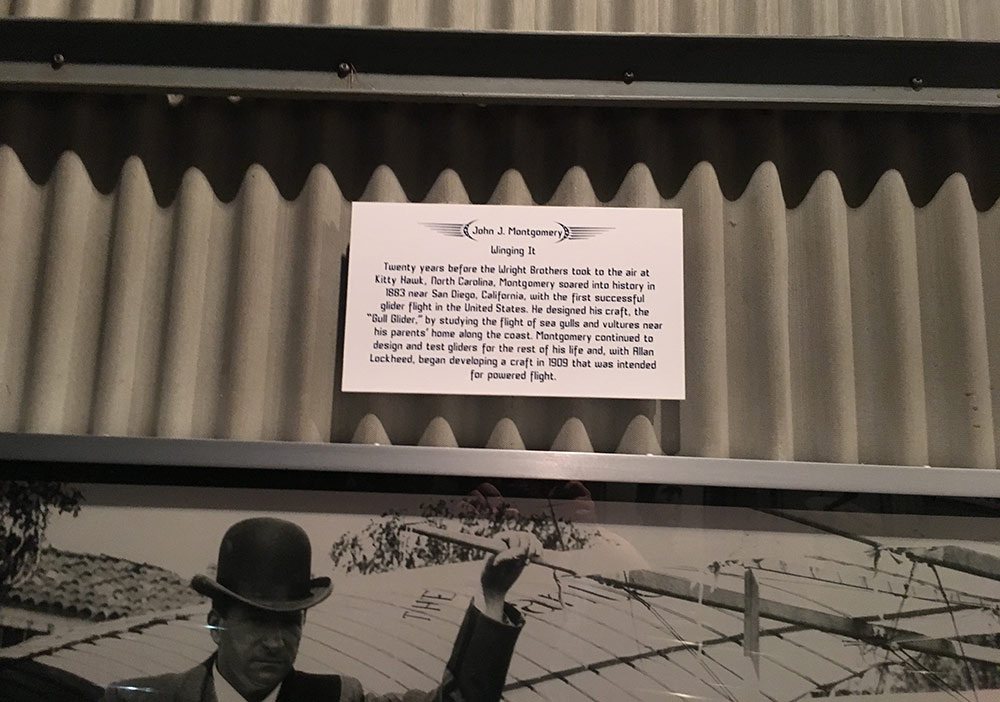 After checking in through the hangar that leads to Soarin’, guests get to experience two museums that pay homage to flight. The first section is the Wings of Fame that remembers planes that made history, including Charles Lindbergh’s Spirit of St. Louis, Amelia Earhart’s Lockheed Vega, and the largest wooden aircraft ever made, Howard Hughes’ Spruce Goose. Look closely for many more amazing pieces of flight history. The second area that guests experience is the Hall of Fame, which includes famous pilots and visionaries of flight. Don’t miss the fact that twenty years before the Wright Brothers, John J. Montgomery was the first to fly with a successful flight that occurred in the “Gull Glider” near San Diego, California!

7 - Patrick Warburton’s role. Upon arrival at the flight tarmac, the chief flight attendant describes the process for boarding. The flight attendant is familiar to many, as Patrick Warburton has played many roles. Disney fans will likely find him most recognizable as the voice of Kronk from the Emperor’s New Groove. So don’t be surprised if you hear a few fans trying to speak squirrel with his introductory video. “Squeaky, uh, squeak, squeaker, squeakin’.”

8 - Humphrey the Bear is a blast from the past. While this doesn’t have to do with Soarin’ the ride, it is something you can experience right across from the attraction. Humphrey the Bear starred in seven early Disney films, including In the Bag. In the Bag was about a park ranger that works with bears to clean up a national park. Many fans will recognize the member song; “First, game sticks up! Why make it work? Litter clean-up can be fun. Just pick it up and put in the bag, bump bump.” 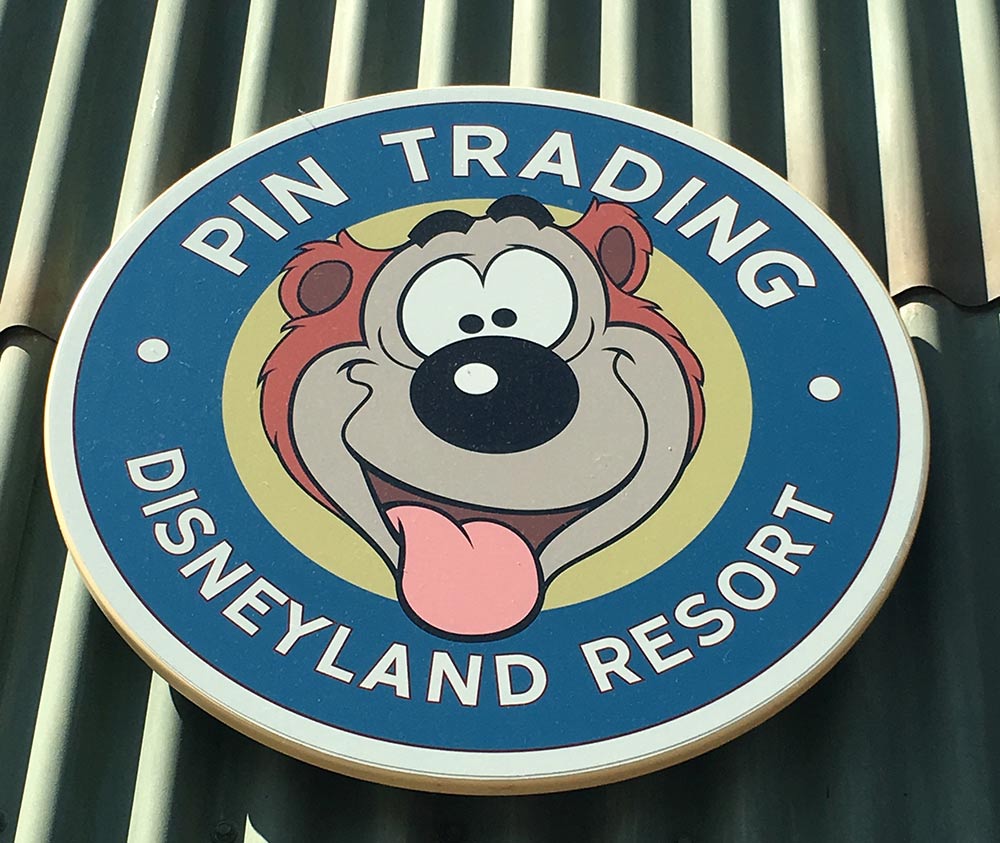 The Humphrey’s Service and Supplies shop across from Soarin’ is named after this lovable character and you can even see him in some of the décor. It’s another showcase of Disney’s superb theming and will get you excited as you head to soar over the world.

9 - Smoke Jumpers Grill and the National Parks. Located right next to Soarin’ Around the World, the Smoke Jumpers Grill features amazing sandwiches and burgers. It’s a chance to relax and talk about the amazing adventures you just had on Soarin’. Additionally, this is one of the places you can see John Muir’s influence in the area. John Muir helped to lobby Teddy Roosevelt to create the National Park system, which is why it makes sense for Disney to have placed his quotes throughout the Grizzly Peak and Soarin’ areas. 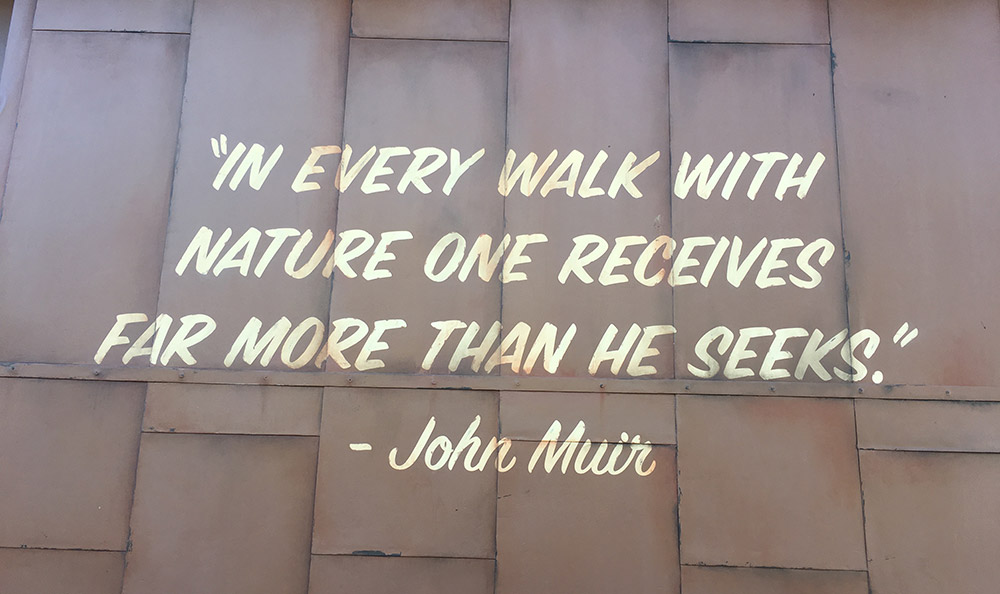 10 - FastPass is a must. Don’t forget to take advantage of the MaxPass ($20 per person per day) and FastPass system on your next outing to Disney California Adventure. Soarin’ is one of the most popular attractions on the park and can quickly end up with wait times of an hour or longer. Either way, enjoy the ride, it’s a sensory experience that will be remembered for many years to come.

It is so much fun to soar over some of the world’s icons! Get Away Today will help you plan your next adventure to the Disneyland Resort. They can help with everything from your preference in accommodations and length of tickets to tips on food, fun and Disneyland secrets. Book any of their affordable Disneyland packages online or by calling 855-GET-AWAY. 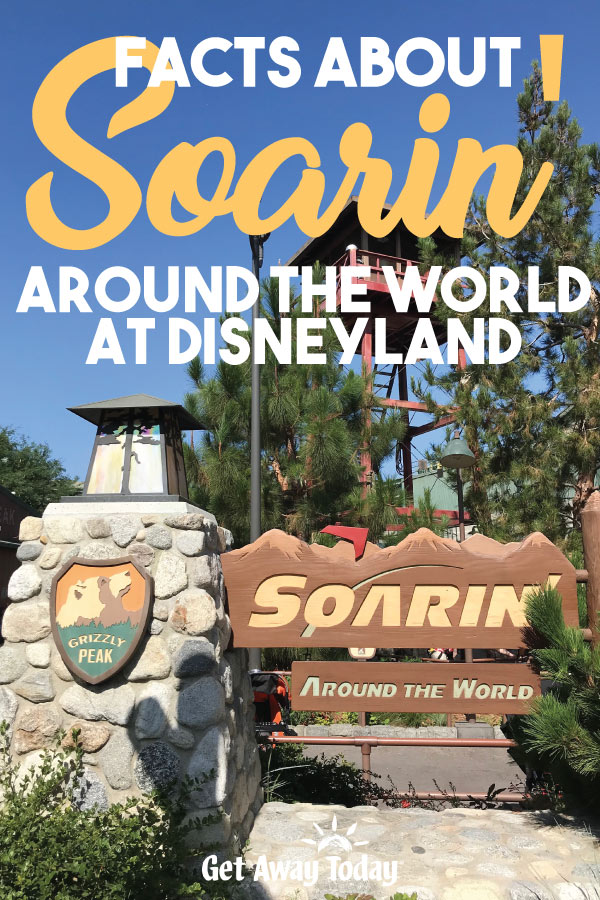 Anonymous - For a limited time this summer, it will be Soarin' Over California! Take advantage of this overlay June 1 - 30, 2019.

Get rid of World. Go back to Soarin over California