History right in front of you!  A list of 15 must-see items for any Disneyland fan.

The Disneyland Resort was created with the idea that guests could visit different lands and times, all in one place.  Walt Disney's opening-day speech suggested that Disneyland was created with the dreams, ideals, and hard facts that created America, and also the premise that age could relive fond memories of the past. Disneyland continues to pay homage to Walt’s vision by maintaining and caring for Walt’s creation. As a result, the creations themselves have become historical treasures. Join us as we explore 15 historical elements of Disneyland that are right in front of you.

1901 America was an exciting time; it was the beginning of the Industrial Revolution. Streetlights capture the moment in time when gas lamps switched to electric lights. Horse drawn carriages are replaced by the horseless carriage. You'll see the penny on the Penny Arcade gets in on the fun and remembers Walt’s birth year as its emblazoned with the year 1901. 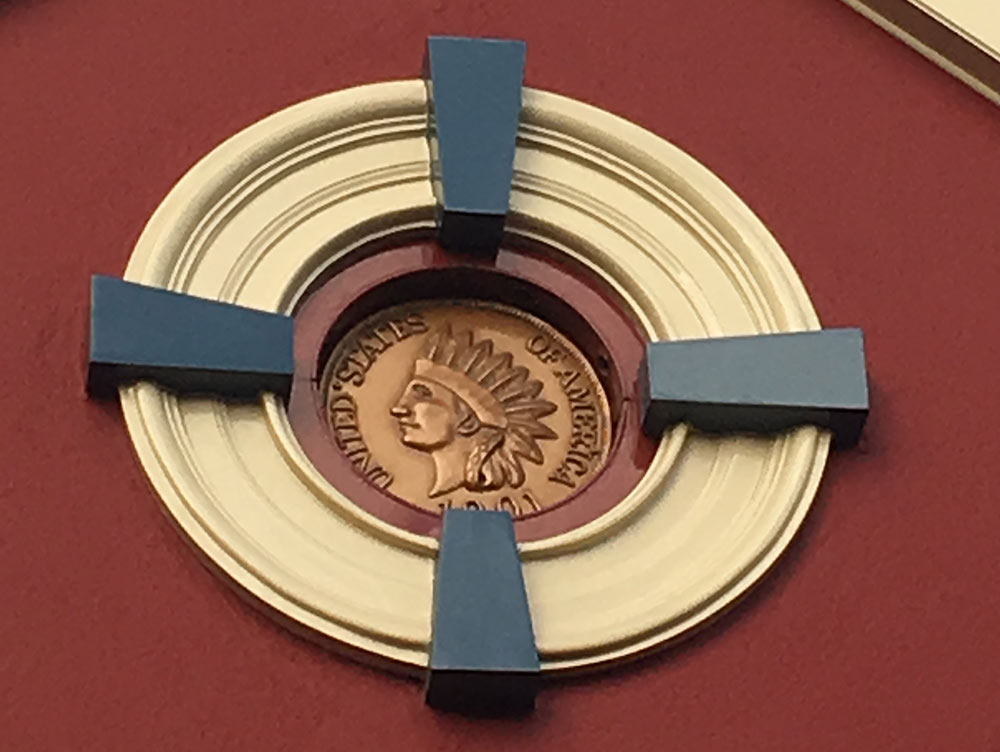 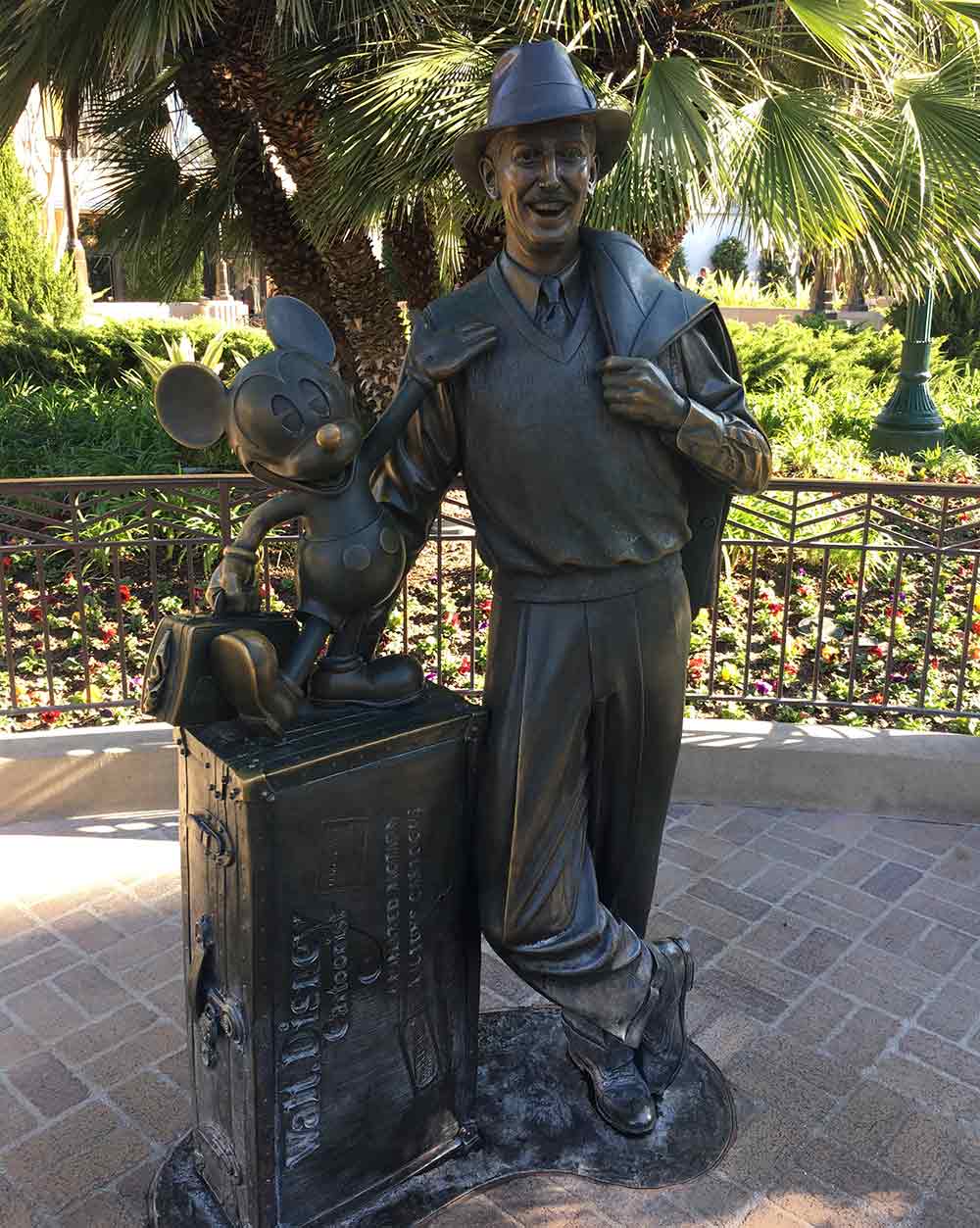 3. Walt and Roy wanted to take their chances in the movie industry and moved to Los Angeles, California. The Disney Brothers Studios opened in 1923. Business was great and they moved the studios to Hyperion Avenue along with a brand new sign which changed from the Disney Brothers Studios to the Walt Disney Studios. Mickey Mouse was born in 1928 and a new sign was created to advertise the commercial success. A replica of the sign can be found in the Hollywood Back Lot Area of Disney’s California Adventure, across from the Hyperion Theater. Did you catch the historical element of Disneyland? The Hyperion Theater pays homage to the address of the early studio! 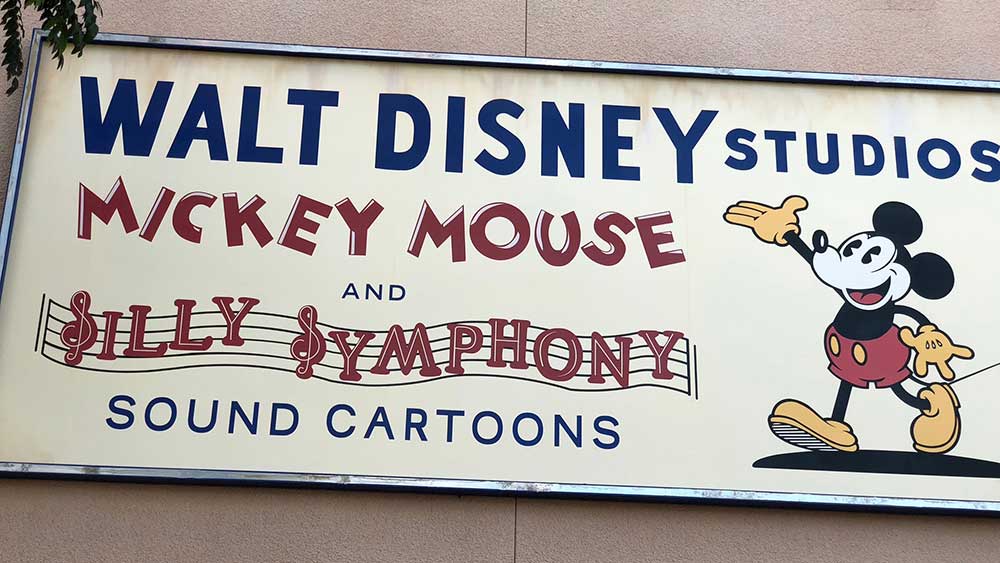 4. Mickey Mouse was not Walt Disney’s first cartoon character. Walt actually created other cartoon personalities before introducing the world to everyone's favorite Mouse. Julius the Cat and Oswald the Lucky the Rabbit are the most notable early works of Walt Disney. Look on Buena Vista Street in Disney California Adventure Park for Oswald’s Service and Julius Katz & Sons. 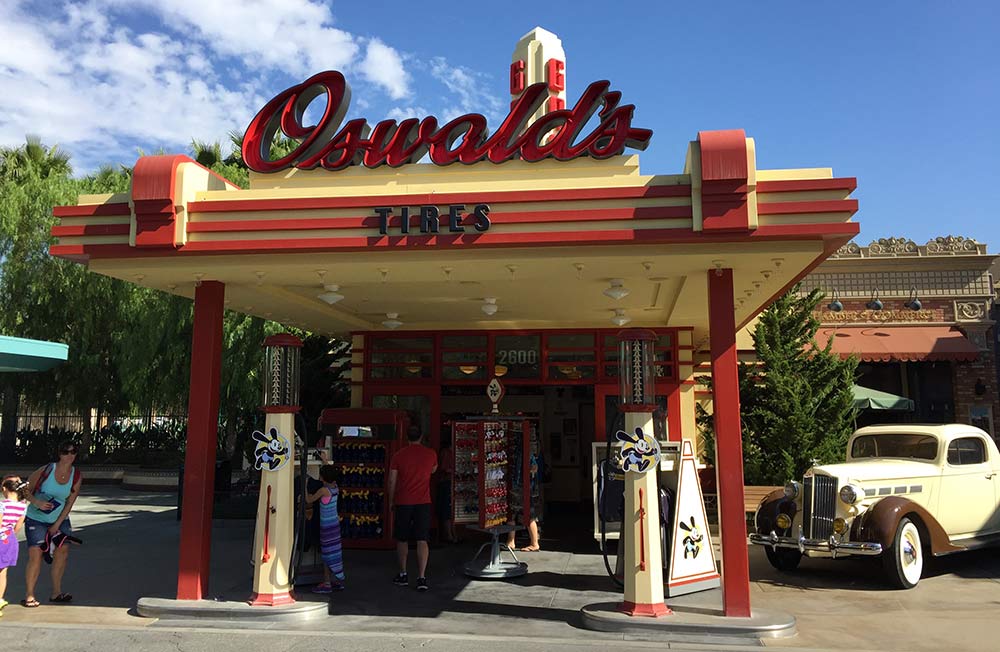 5. Walt Disney Studios continued to have artistic and business success with cartoon shorts. Walt experimented and invited new ways of filming animation. Walt was honored with many Academy Awards (Oscars). One of the films, The Three Little Pigs, was awarded the Academy Award in 1933 for best short film. Cleverly hidden on Buena Street in California Adventure is a little café that remembers the award. Look for the Fiddler, Fifer, and Practical Café, which references the three little pigs and their personalities.

Disney Expert Fun Fact: Walt Disney still holds the record for Academy Award nominations and wins held by one individual. He was nominated for 59 Oscars and took home 26. 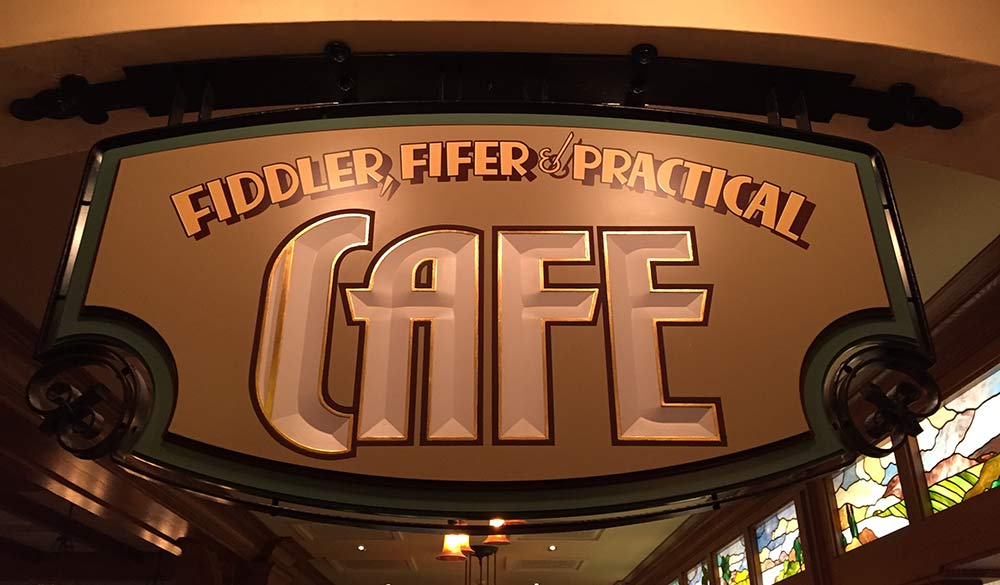 6. In 1937, Walt Disney and his animators took a big risk by developing the first full-length animated movie. Snow White and the Seven Dwarfs premiered on December 21, 1937 at the Cathay Circle Theater in Hollywood. Disney California Adventure features a small replica of the movie palace in place of a castle. The Carthay Circle Theater is certainly worthy to take the place of a castle. 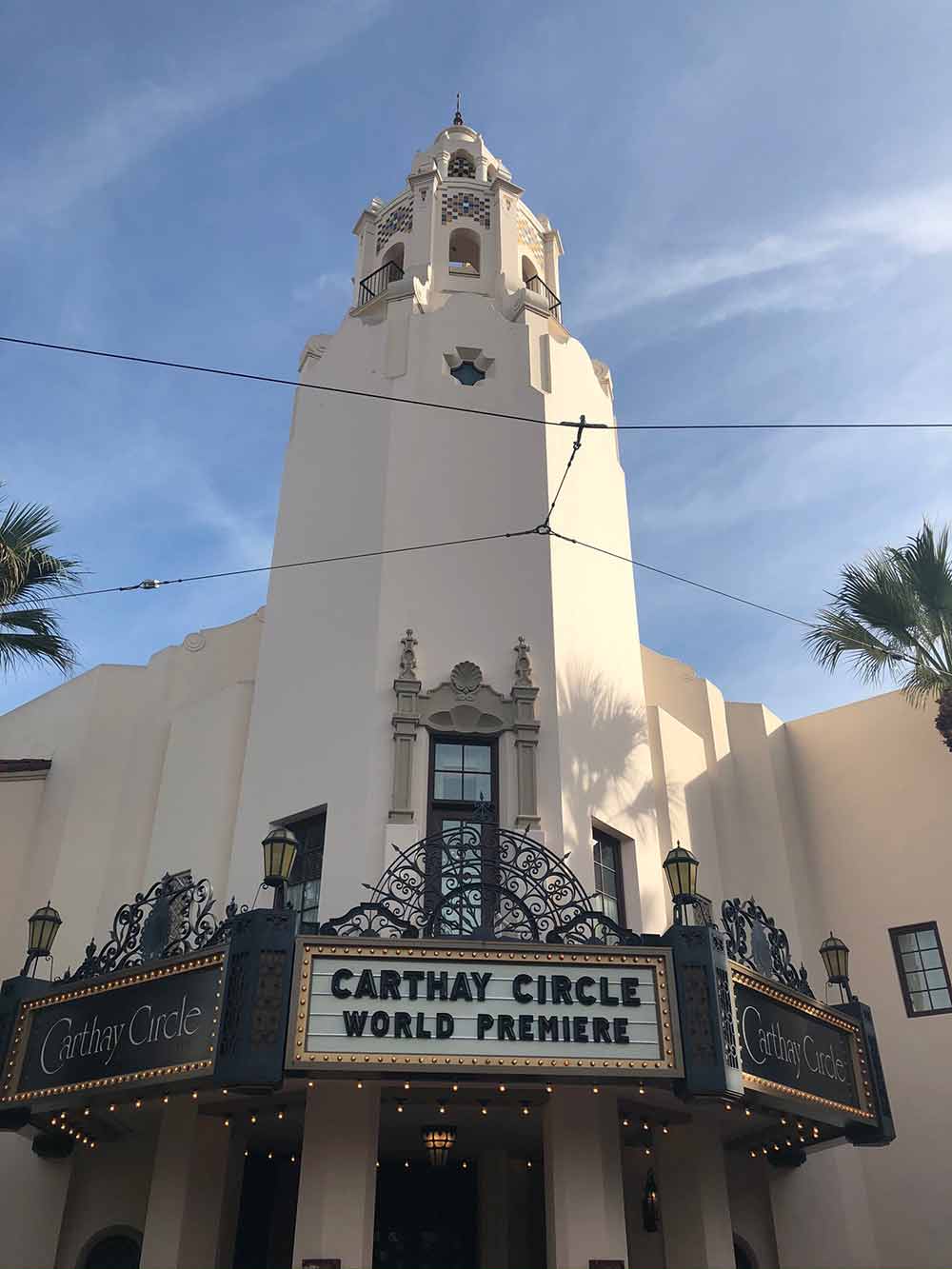 7. Studio life was difficult for Walt so he tried to find creative outlets to help him relax. In 1950, he created a 1/8th scale steam railroad in his backyard. He called it the Carolwood Pacific, named for the street on which he lived. The steam locomotive was named the Lilly Belle after his wife, Lillian. He operated the Carolwood Pacific nearly every Sunday afternoon until 1953 when he started to dream of a magical place, originally referred to as Mickey Mouse Park and later changed to Disneyland! A replica of the Lilly Belle can be found in the Train Station on Main Street, U.S.A.. The original can be found in the Disney Family Museum in San Francisco. 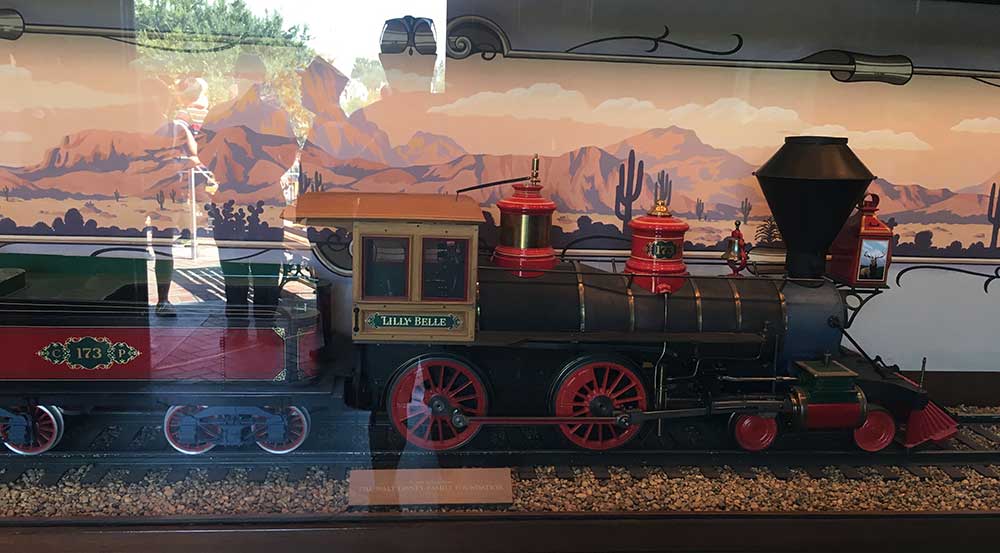 8. Walt believed that spending time together as a family was important. Nearly every Sunday, he would take his two daughters on daddy-daughter dates. A favorite stop was the Griffith Park Carousel in Los Angeles. Parents were not allowed to participate in the fun, so Walt was stuck watching the kids from a park bench. While watching his daughters have fun, he dreamed of a place where parents and children could have fun together. That park bench is the very place where the idea of Disneyland was conceived. The bench and one of the carousel horses can be found in the Opera House on Main Street, U.S.A.. 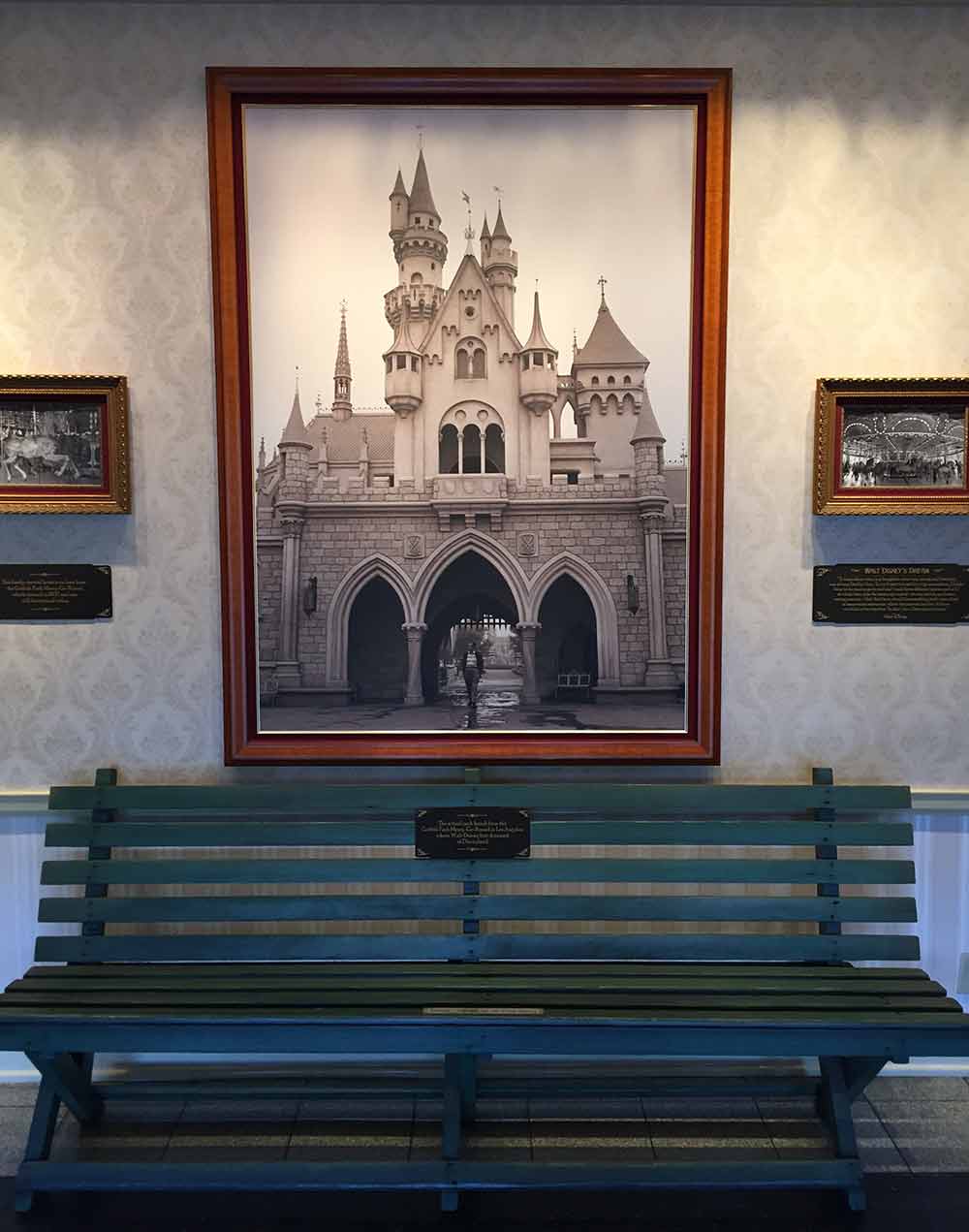 Disney Expert Fun Fact: The first building built at Disneyland was the Opera House. It was built to be the saw mill that built all of the other buildings at the park. The second building was the Fire House across the plaza. You probably know Walt kept an apartment above the fire house. Every time he was in the Resort, he would turn on a light to let cast members know that he was present. After his death, Disneyland began keeping the light on in honor of Walt! 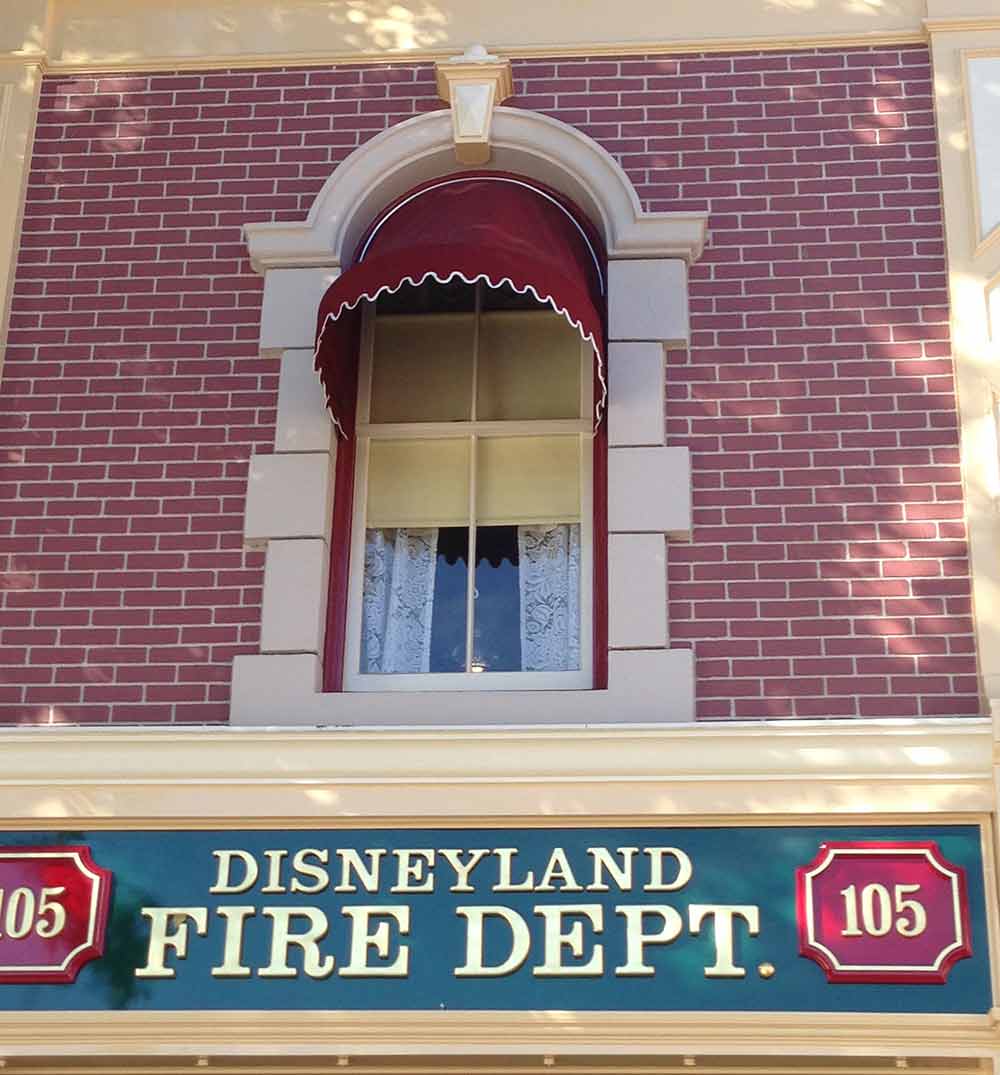 9. Disneyland opened on July 17, 1955. Walt’s opening-day speech is memorialized in bronze near the flag pole on town square at the entrance to Disneyland. In the early days of Disneyland, when families arrived at the park there was a very modest entrance fee to visit. If guests wanted to experience any attractions, they needed a ticket coupon to ride (hence the reference to E-Ticket and D-Ticket attractions these days). Many of the early attractions had a ticket booth nearby to purchase and take tickets. The ticket booth windows have since been covered and integrated into Disneyland today. The booths can still be found by a few of the original attractions, including Casey Jr., Alice in Wonderland, Storybook Land canal boats, and Dumbo. 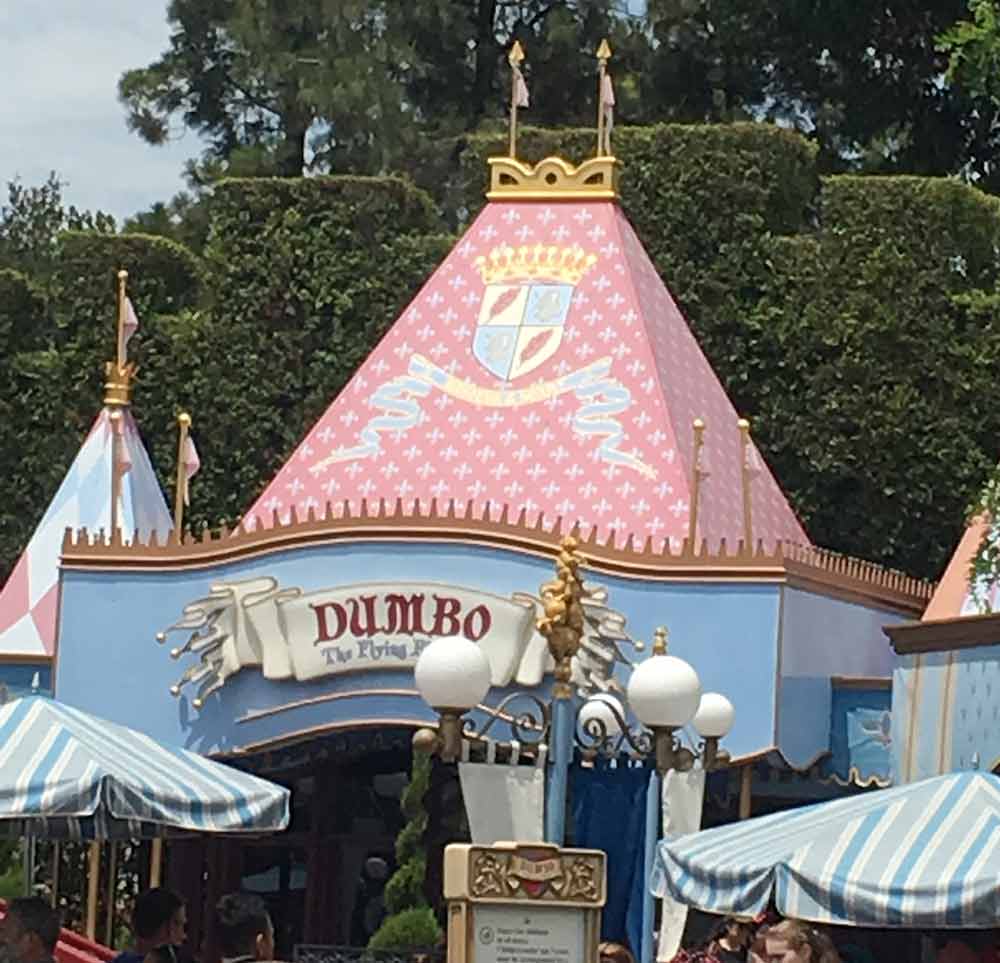 10. A common practice of Disneyland Imagineers is to leave a reminder of some of the retired attractions that Disneyland has offered over the years. The idea is to preserve a little bit of the past. There are many examples, and some of my favorites include:

There are many other examples of retired attractions throughout the park. How many can you find? 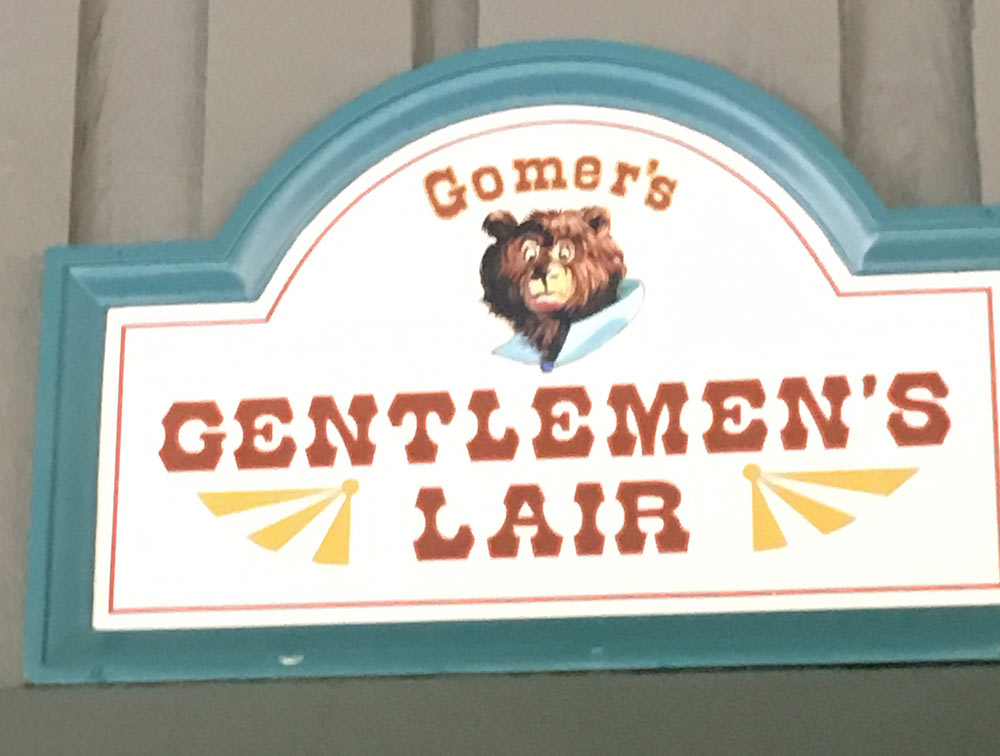 11. Throughout Disneyland, fantastic things of the past can be found. Park guests are excited hat historical elements of Disneyland include old orchestrion machines (the best can be found at the back of the Penny Arcade and in the back spaces of Davy Crockett’s Pioneer Mercantile in Disneyland). As the sound of over 100 years ago springs to life, guests can find old time entertainment machines, hand-made candy and treats. Throughout the stores and arcades guests can find messengers of the past in the form of antique telephones. Pick up the receiver to hear what a conversation may have sounded like in 1890. Coal burning stoves and many other references to the past can be found, including gas lamps, antique mail boxes and cigar store mascots. My family loves the cigar store stop and we have used it as our favorite growth chart over the years. We almost run to it because everyone knows that is our first picture! 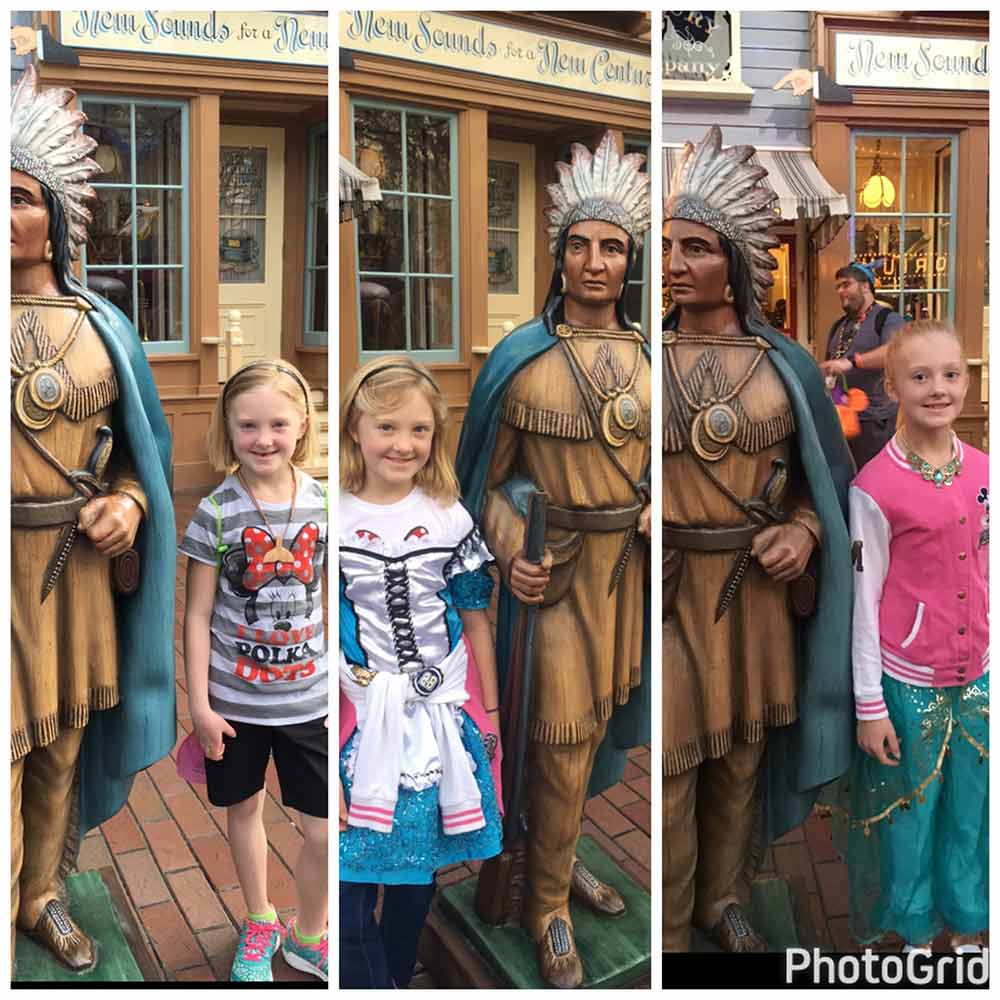 12. The Disneyland Resort is filled with nods to Hollywood’s past. Look closely in the Indiana Jones attraction for a troop vehicle. It is the actual movie truck used in Raider’s of the Lost Ark, where Indy slides underneath to save the Ark of the Covenant from the villains. Star Tours also features movie-used models of C-3PO and R2-D2 from the original Star Wars trilogy! In addition, look close in the Guardians of the Galaxy Attraction for many Disney historical items including the original Yeti from the Matterhorn attraction! 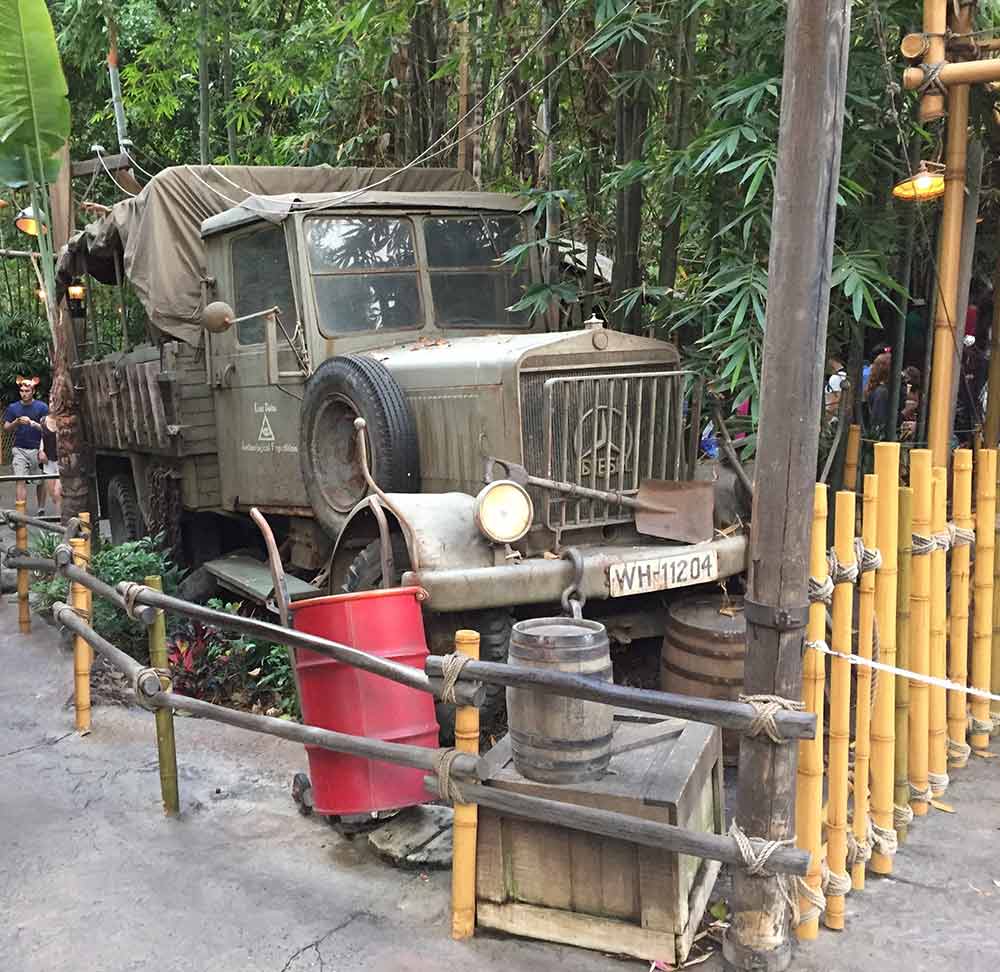 13. It is so fun to ride on an authentic steam locomotive or river boat at the Disneyland Resort! Watch the mechanical operations fueled by ingenuity that now help to transport history buffs back in time. It makes you wonder what additional adventures are around the next corner. Listen close to the steam whistles in the park; on occasion the train or the river boat will start with “shave and a haircut…” and the other will finish with the venerable two blows that make up “two bits!”

Disney Fun Fact: Disneyland’s official address is 1313 Harbor Blvd, Anaheim, CA. Disney fans everywhere do not think this is by accident. M is the thirteenth letter of the alphabet and many believe 13 13 is Mickey Mouse’s initials. Did you know the local phone number for Get Away Today Vacations is 801-479-1313? The coolest! 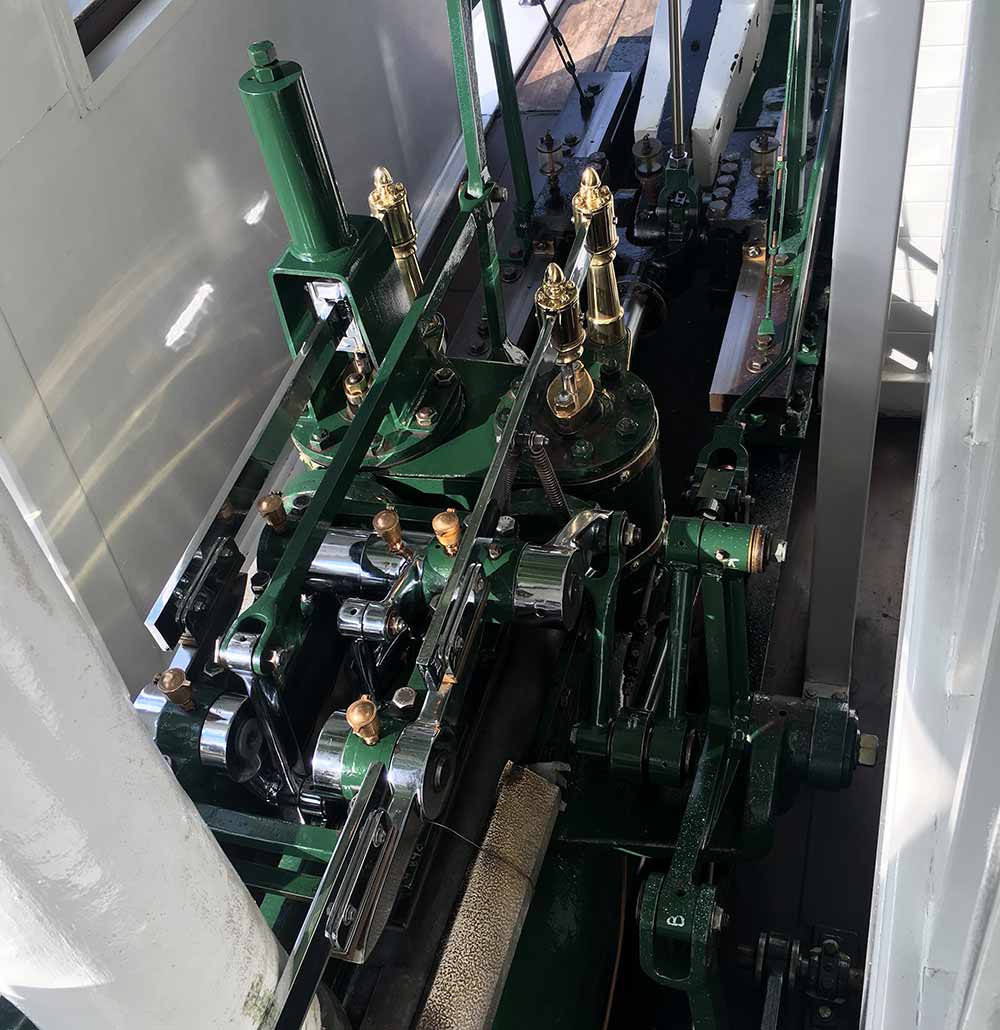 The mechanical equipment that runs the Mark Twain River Boat is so fascinating to watch and study! I am almost mesmerized by the experience and often choose to take more than one trip around the river bend!

14. The Soarin’ attraction at Disney California Adventure features a history of aviation and includes an air and space wall of fame located in the queue. Aviation heroes include the Lockheed-Martin, Amelia Earhart, the Spirit of St. Louis, Jimmy Doolittle, Howard Hughes and many other pioneers of flight. 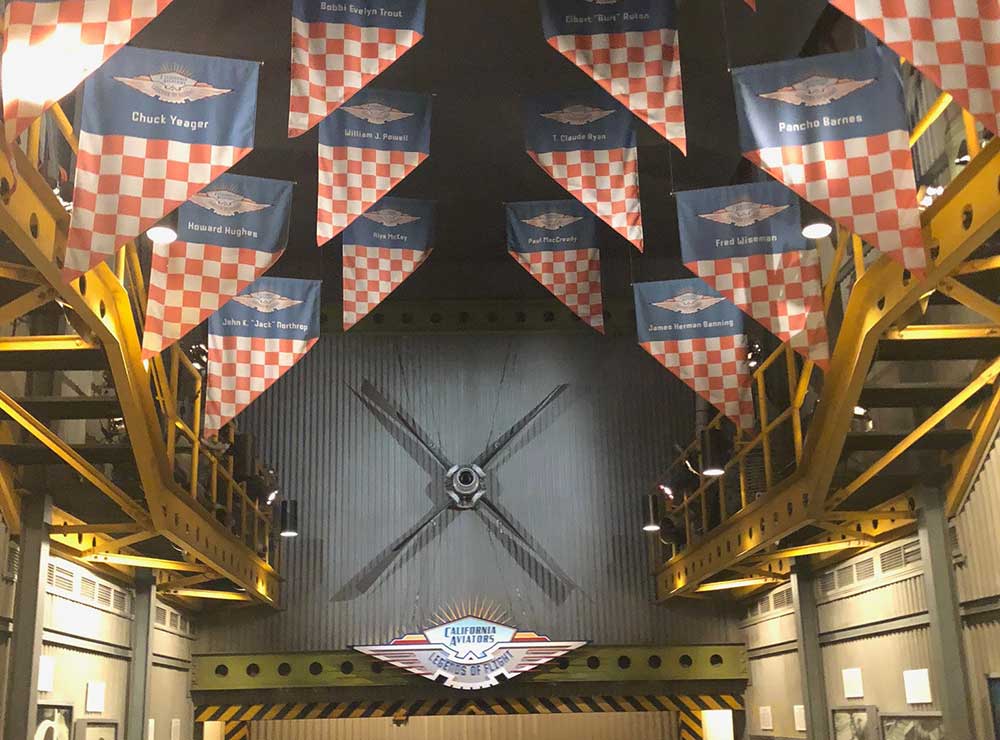 15. The Disneyland Hotel lobby is filled with Disney history. An entire wall is dedicated to Disneyland merchandise and souvenirs from the past. It is worth a stop to check out the crazy and fun merchandise from history. 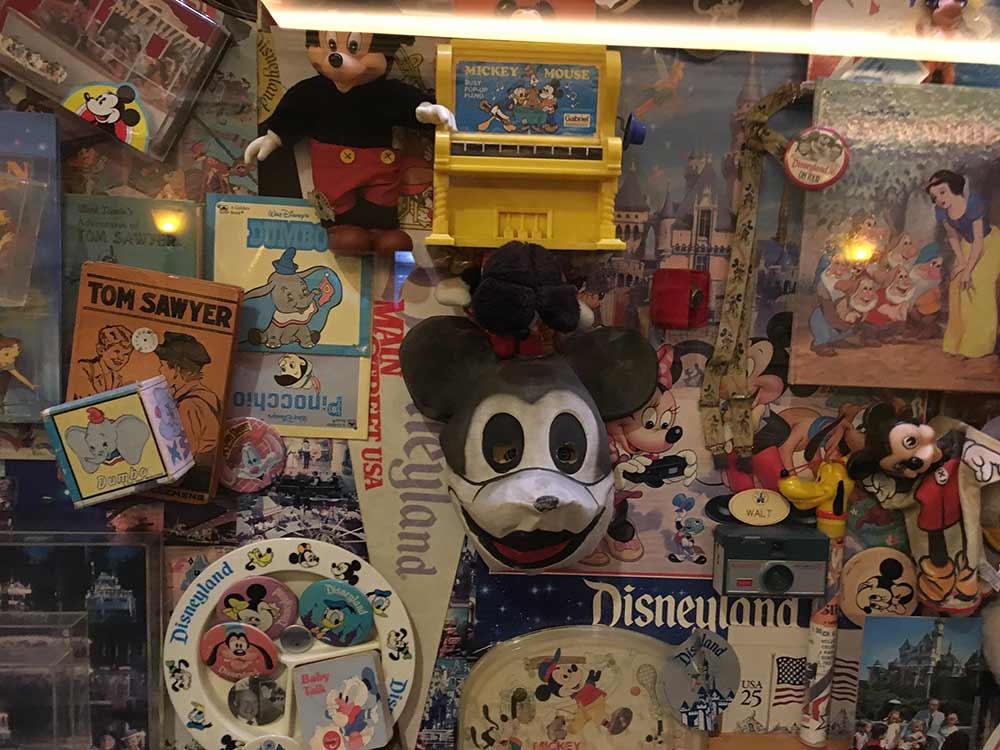 Disneyland is full of fun memories of the past and is “steaming” with the history of America. There are many more references to history throughout the park, take the time to look at all of the details and see if you can be re-live fond memories of the past. Get Away Today Vacations can guide you to a creative vacation fit for every member of your family with everything from discount park tickets, a list of secrets to make your trip special, and information to the most affordable and themed hotel accommodations. Call Get Away Today's experts for your free quote today: 855-GET-AWAY. 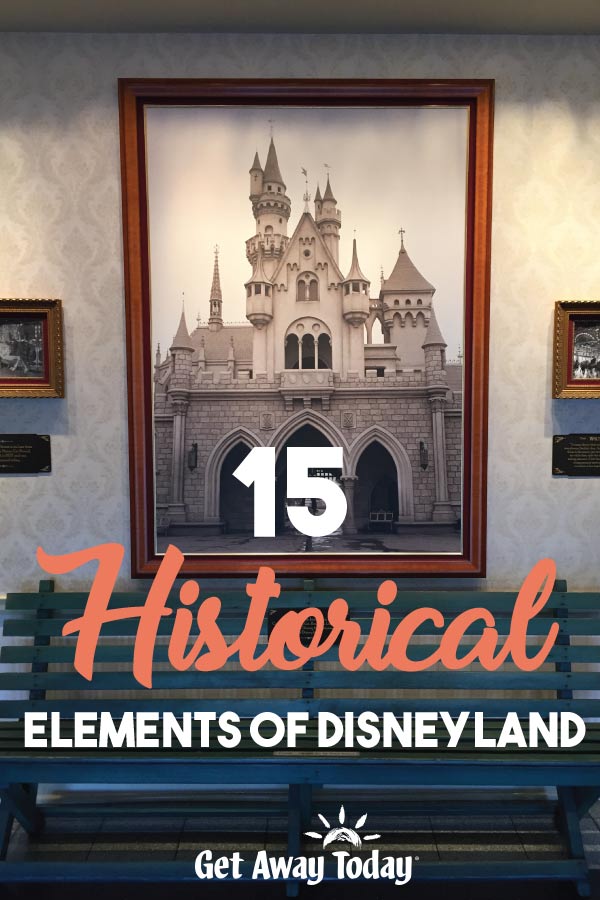