Did you know that the magic and adventure that Disneyland brings to many is steeped in lore, attention to detail and fond memories created with loved ones? If you know some of the details at Disneyland, it can create a rich experience on your next trip to the Happiest Place on Earth. 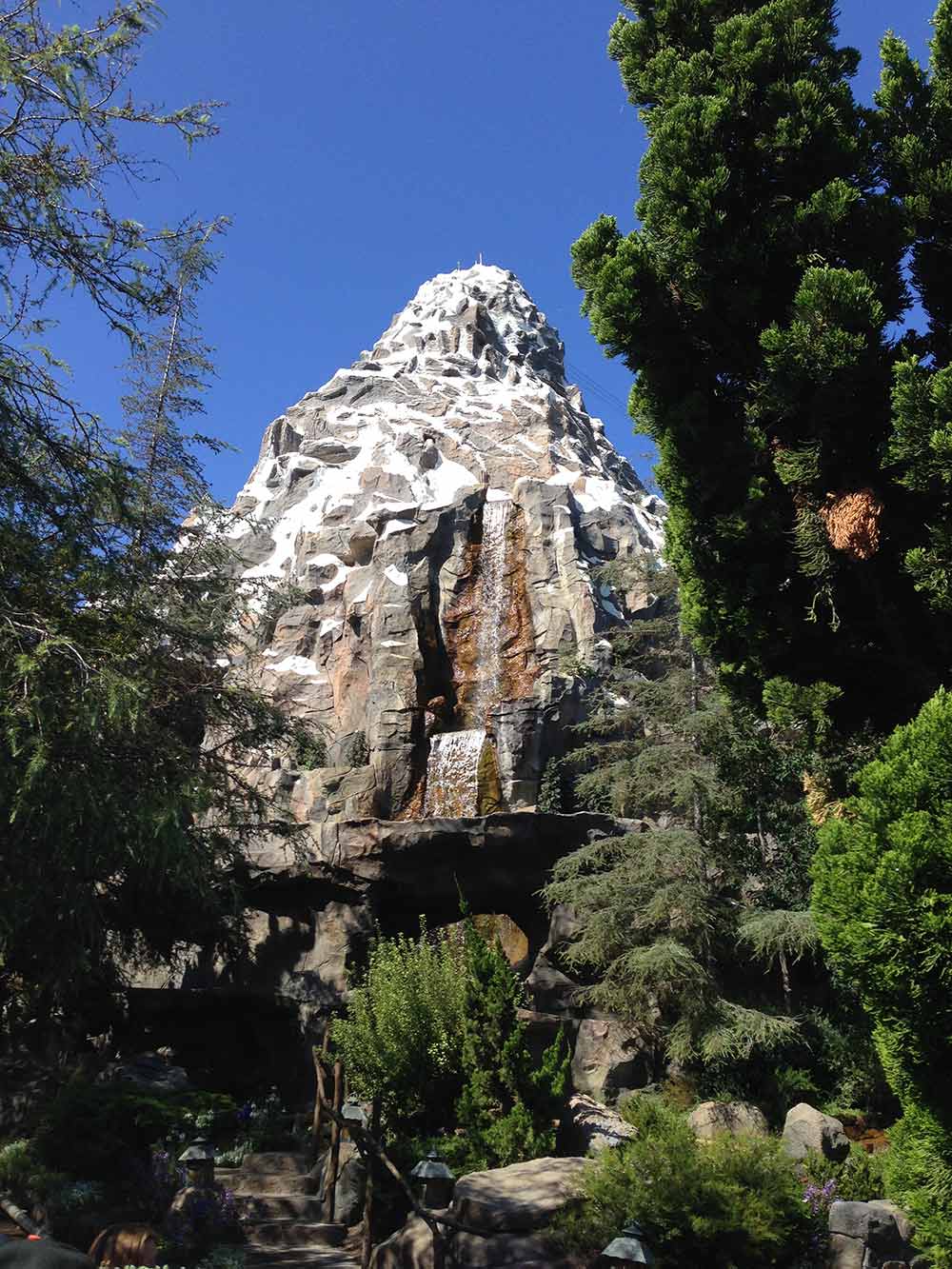 Included in the list below are some of the hidden secrets of Disneyland history and Disneyland's present. Follow along as we explore the fastest, oldest, first, and even craziest facts that make Disneyland one of the world’s most popular family vacation destinations in the world.

The Incredicoaster: The award for the fastest attraction at the park goes to the Incredicoaster. Once themed as California Screamin’, the Incredicoaster uses linear induction motor technology with over 5,000 horsepower to propel Disneyland guests at 55 miles per hour in just a few seconds! But hold your horses because that’s not it! The Incredicoaster is the longest inverting roller coaster in the world and at 6,072 feet long, the thrill ride is certainly incredible… So hang on, put those Mickey ears away, eat that churro and get ready to blast off on the fastest ride at the Disneyland Resort. 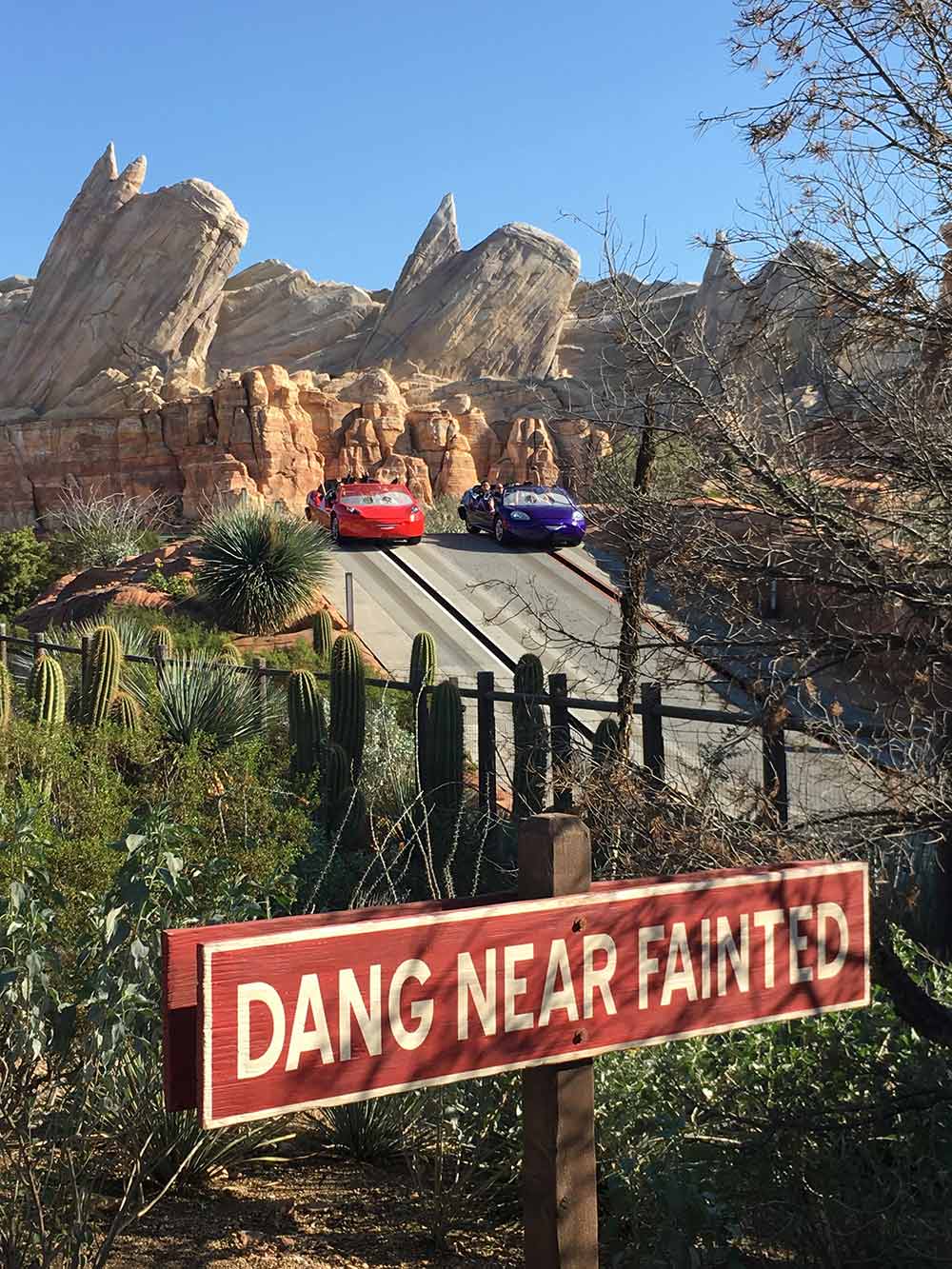 Radiator Springs Racers: This ride in Cars Land allow guests to speed through Ornament Valley on a drag race with Lighting McQueen at 40 mph.

Splash Mountain: Get ready! Splash Mountain drops guests down the steep and hill right into the Briar Patch with Briar Rabbit at 40 mph. 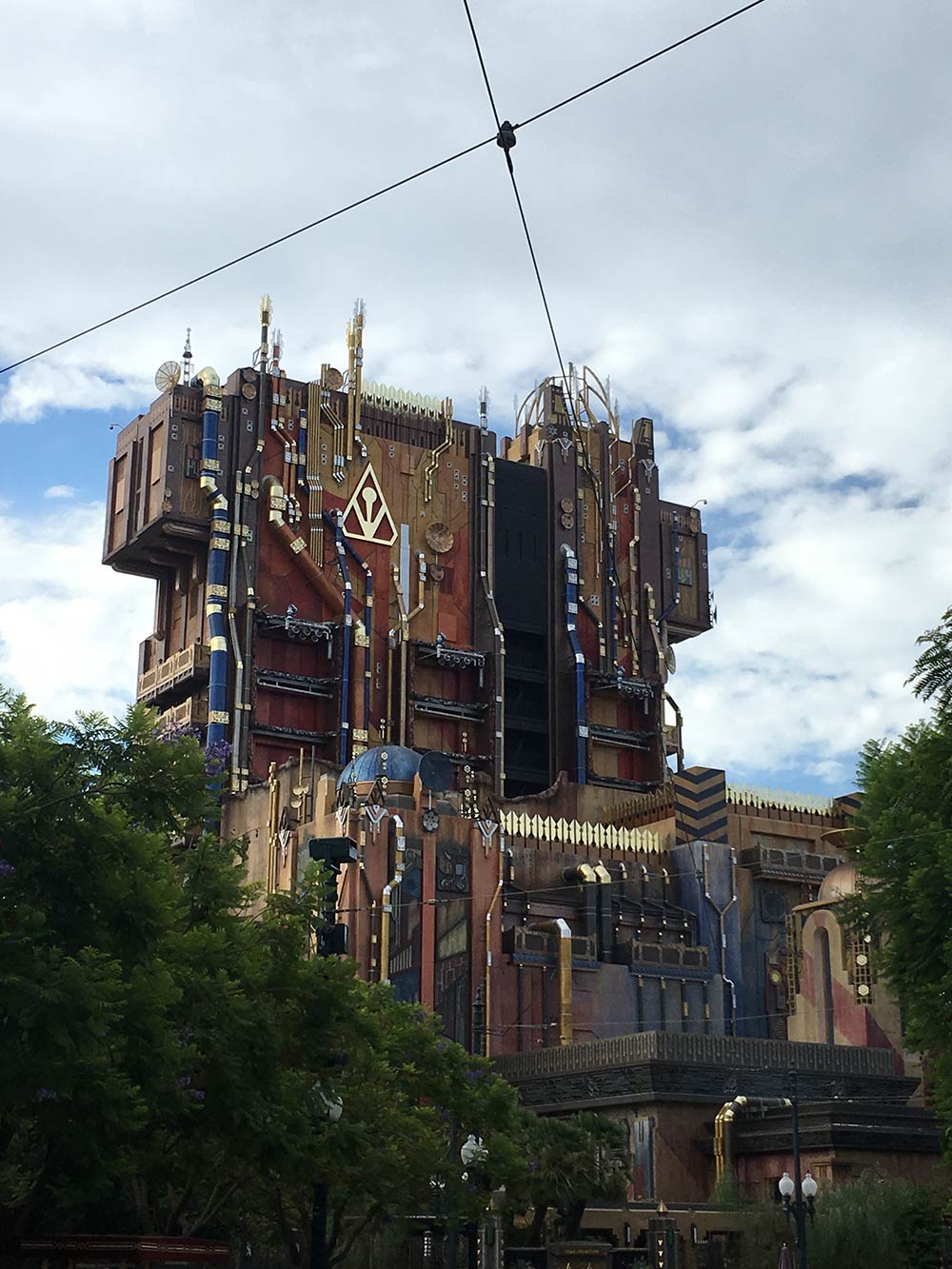 Guardians of the Galaxy - Mission: Breakout! – A list of fast things at Disneyland would not be complete without including a true free fall experience. The elevator at the Collector’s Fortress free falls at 32.2 feet per second and reaches speeds up to 39 miles per hour. 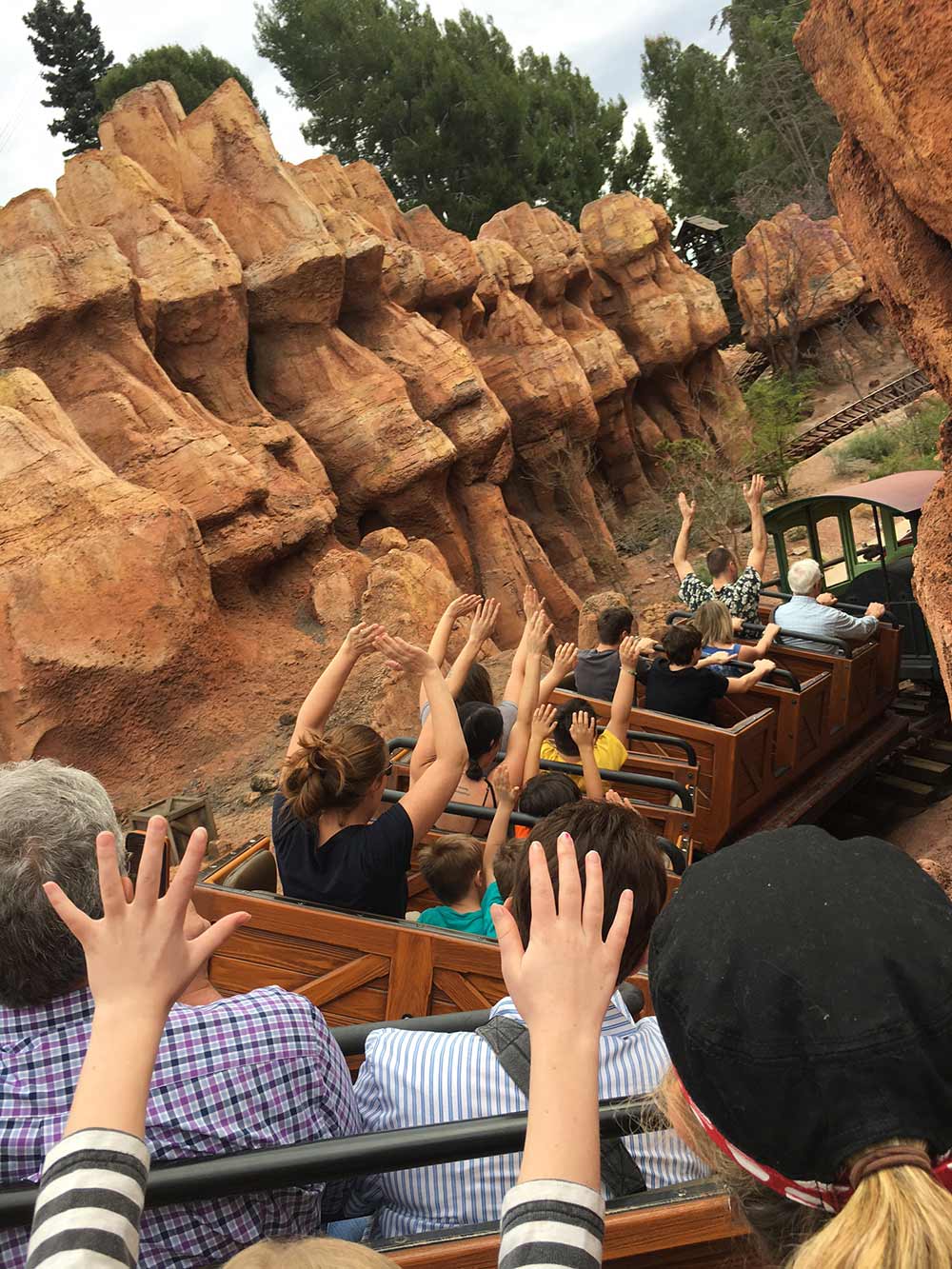 Honorable mention of the fastest things at Disneyland is my family when they hear that the churro kiosk has opened! In addition, there are some thrill rides to find at Disneyland, including the fastest ride in the wilderness at Big Thunder Mountain Railroad, which chugs down the red rock mesa at 36 miles per hour.

There are many amazing things to see and do at Disneyland. Part of the early ideas and concept of Disneyland was to experience the past with shops, stores, and museums that held antiques, memories from history and additional details. Some of the relics have been removed, but if you look close, many can still be found today! 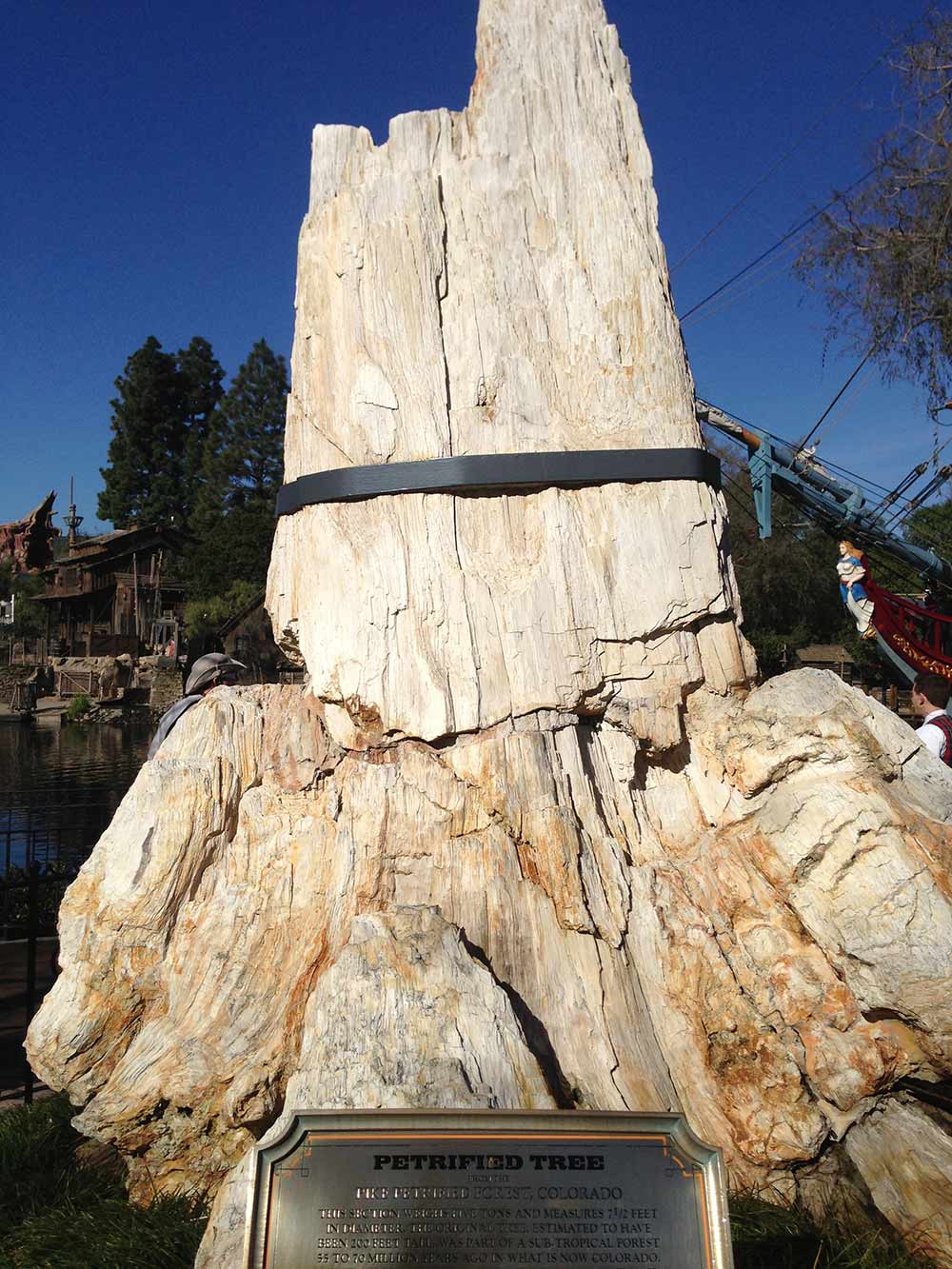 Petrified Tree: Weighing in at over five tons, the Petrified Tree in Frontierland is believed to be nearly 70 million years old. According to the plaque that accompanies the tree, the Petrified Tree was once part of a sub-tropical forest in what is now Colorado's Pike Petrified Forest. How did the fossil make its way to Disneyland? This piece of Disneyland history is very personal the Walt and Lillian Disney themselves. Walt and Lillian were celebrating their 31st anniversary with a trip to Colorado and the Pike Forest Fossil Beds. While there, Walt purchased the remains of one of the trees – a piece that weighed over five tons. Lillian donated the giant petrified tree piece to Disneyland. It’s reported that she claimed it was “too large for the mantle”! 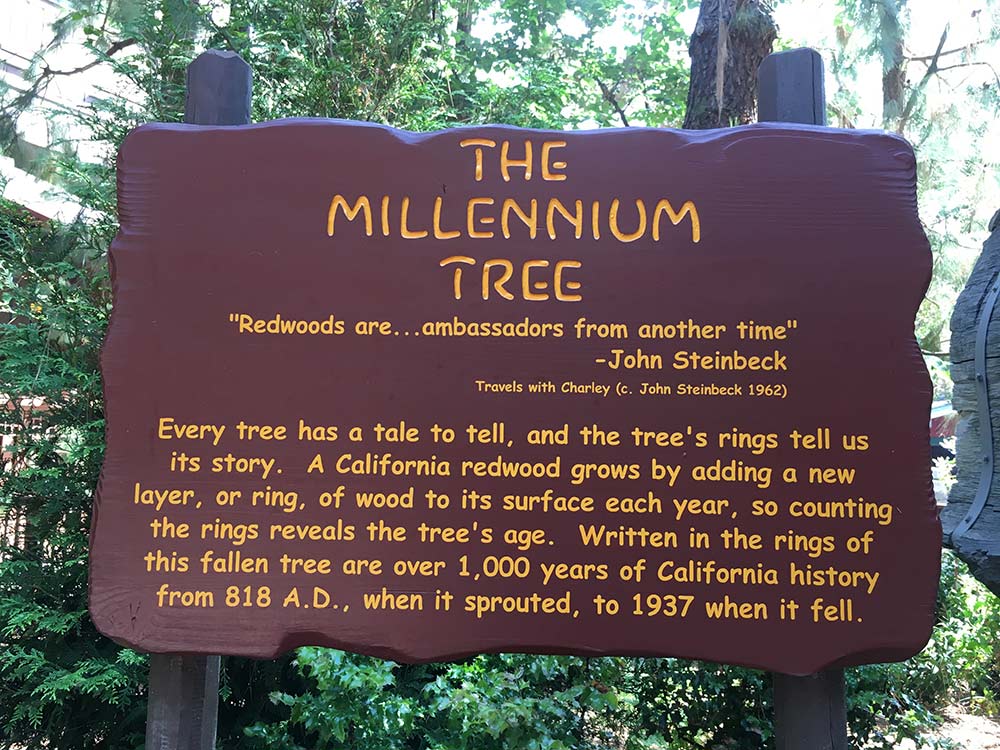 The Millennium Tree: Over 1,000 years old, a piece of a coastal redwood can be found in California Adventure Park. Look closely; historical events that make up America’s history can be traced in the rings of the tree.

Speaking of trees, a two-foot tall Mugho Pine can be seen on the Storybook Land boats, and it is over 150 years old. Another tree, now referred to as the Dominquez family palm tree, is over 100 feet tall and can be seen near the entrance of Indiana Jones: Temple of the Forbidden Eye.

Aside from trees and fossils, the oldest attraction at Disneyland is the Main Street Orchestrion Machine, built in 1915, the machine continues to thrill guests. Look for it in the back portion of the Penny Arcade on Main Street, USA.  A close second is King Arthur’s Carousel. The attraction was built by the Detzel Company in 1922 and was moved to Disneyland for opening day in 1955. 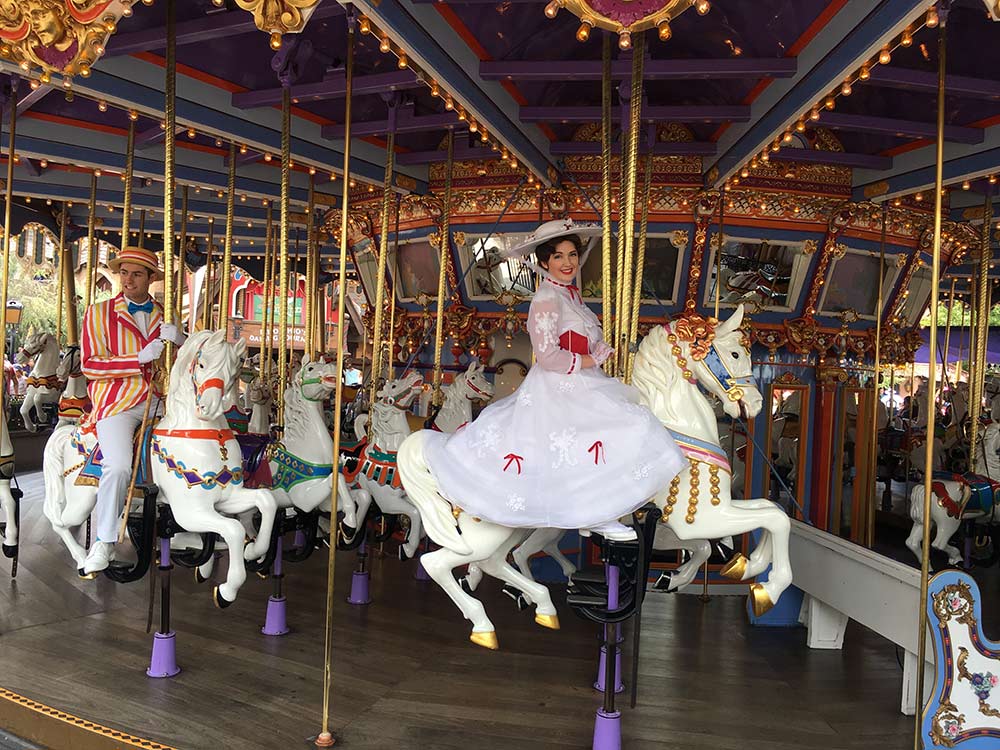 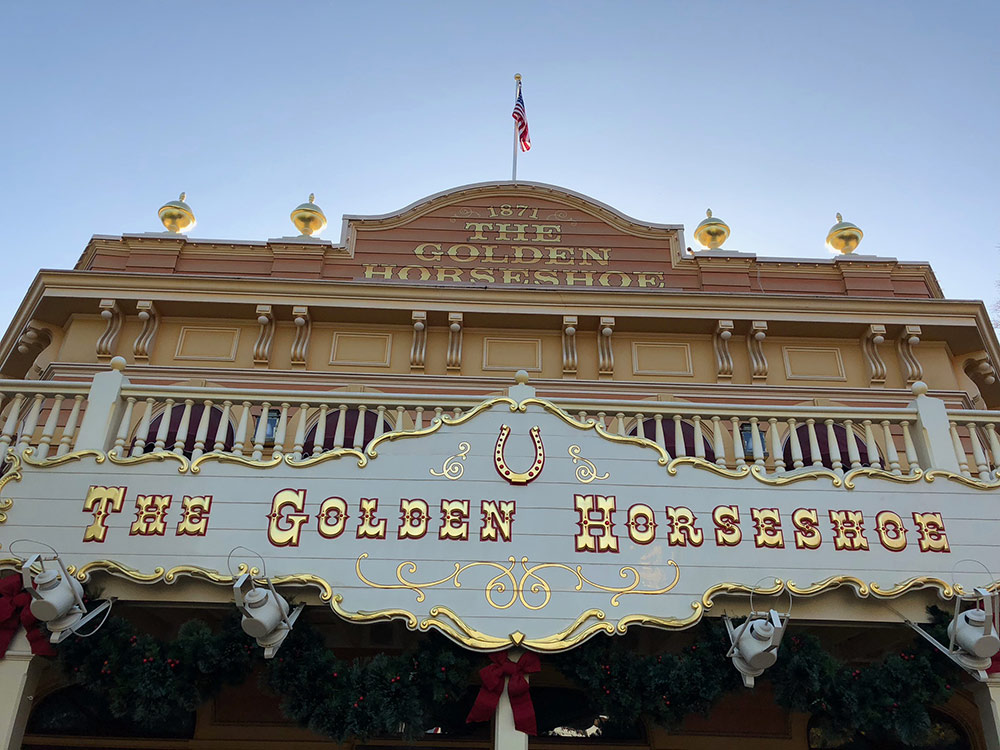 Technically speaking, Mark Twain Riverboat and the Golden Horseshoe Saloon are believed to be older, because they were used first. They were the venue for Walt and Lillian Disney’s 30th Anniversary Celebration, held on July 13th, four days before opening day at Disneyland!

Disneyland opened on July 17, 1955 and is the first Disney theme park in the world. Every attraction at the park was the first of its kind. Many attractions at other Disney parks throughout the world have emulated the original attractions.

The first Disneyland building to be built was the Disney Opera House. It served as a lumber mill to cut and shape wood for all of the other buildings and attractions. 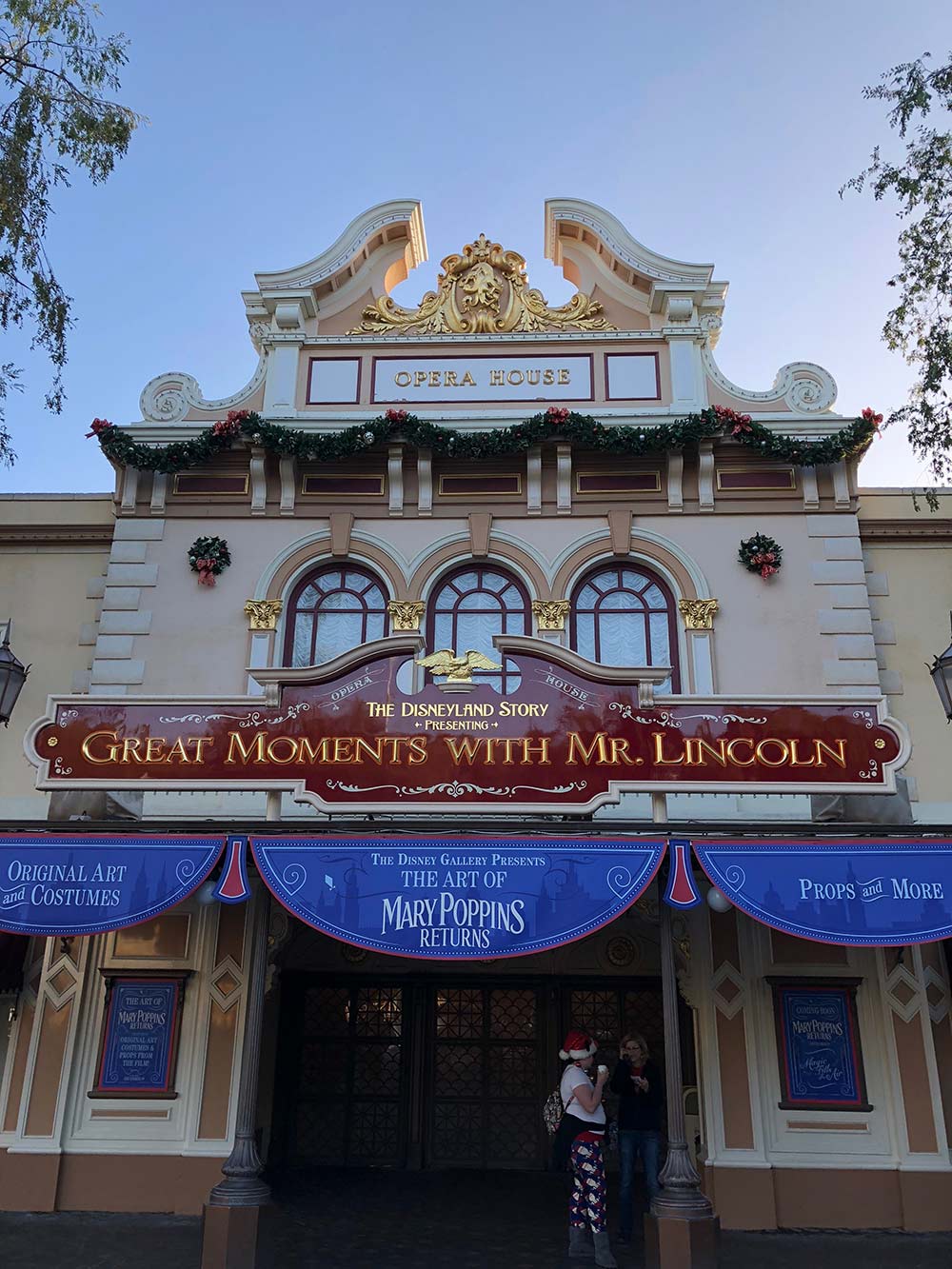 The Matterhorn is the world’s first tubular coaster. Walt Disney visited the Swiss Alps while he was making the 1959 film Third Man on the Mountain. Walt was a fan of miniatures and obsessed with scale and realism. He made a plan to bring his own version of the Matterhorn to Disneyland! Not only was the Matterhorn the world’s first tubular coaster, but it was also the birth of the E-Ticket ride at Disneyland. Opened as part of a large expansion in 1959, the Matterhorn is 147 feet tall versus the original 14,700 feet of the real Matterhorn Mountain – exactly 1/10 scale. 1959 also brought the Alweg Monorail System and the Submarine Voyage to Disneyland. 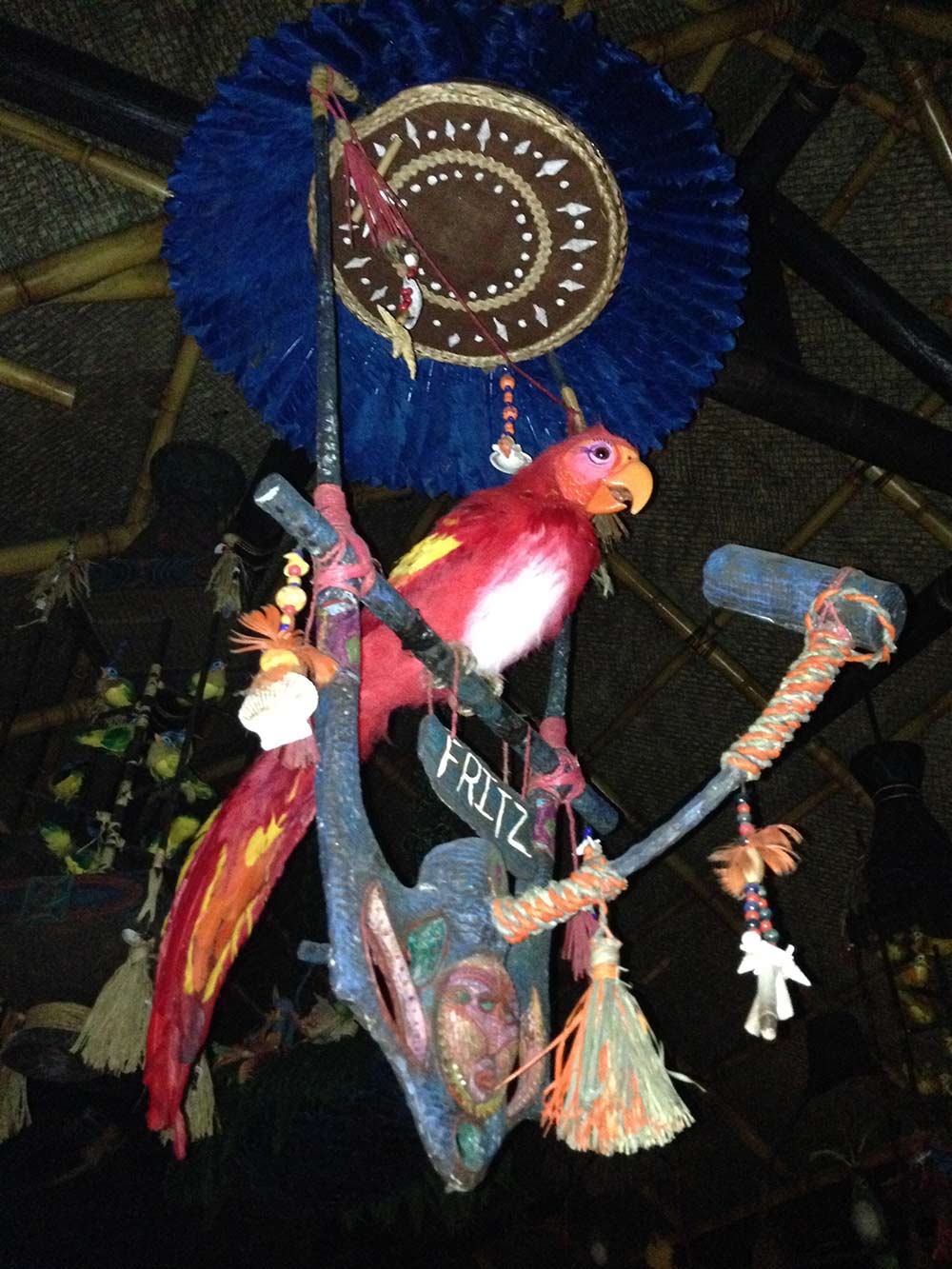 The world’s first Audio-Animatronics were invented at Disneyland. Guests can still see the original show at Walt Disney’s Enchanted Tiki Room. As part of a trip to New Orleans with Lillian, Walt found a mechanical bird and he asked his imagineers to “find out how they worked.” They did, and created the Enchanted Tiki Room! Walt personally financed the enterprise.

Did you know Doritos were invented at Disneyland? In the early days of Disneyland, the Frito-Lay Company hosted Casa de Fritos.  An enterprising manager put “taco-flavoring” on chips and sold them to guests. They loved them and Doritos were created!  A world’s first that have expanded to one of the America’s favorite snack chips!

There are many stories of history and lore at Disneyland. Here are a few crazy stories that share the obsession with detail, and perhaps a little coincidence, at Disneyland Park:

Disney’s address is 1313 Harbor Blvd. Some Disney fans think that this was planned an homage to Mickey Mouse. M is the 13th letter in the alphabet, so Mickey's initials MM = 1313.

The Draw Bridge on Sleeping Beauty Castle really works! It is the only Disney castle that has a working drawbridge. It has been raised and lowered twice. Once on opening day and the second as part of a Fantasyland upgrade in 1983. 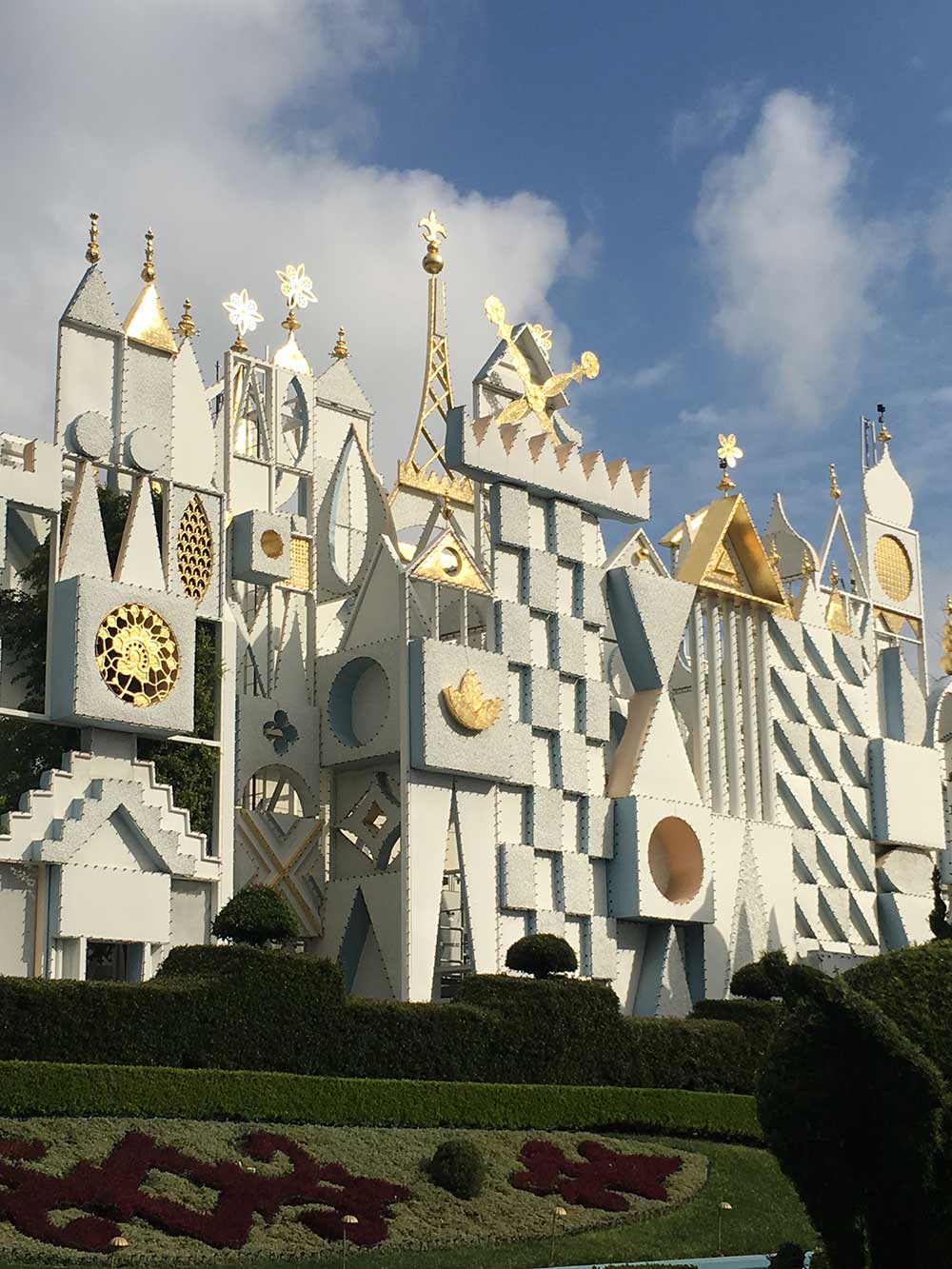 Did you know that a spire at Sleeping Beauty Castle and the façade of "it’s a small world" is covered in real gold? The shimmer and sparkle that guests get to see from the attractions is the sun catching the beauty from gold leaf!

Choose your adventure and make lasting memories! Let Get Away Today help you plan your Disneyland vacation so you can be part of Disneyland history and experience Star Wars: Galaxy's Edge in its inaugural year. Check out Disneyland Resort vacation packages online, or call 855-GET-AWAY to speak directly to an agent. Let us know how we can help! 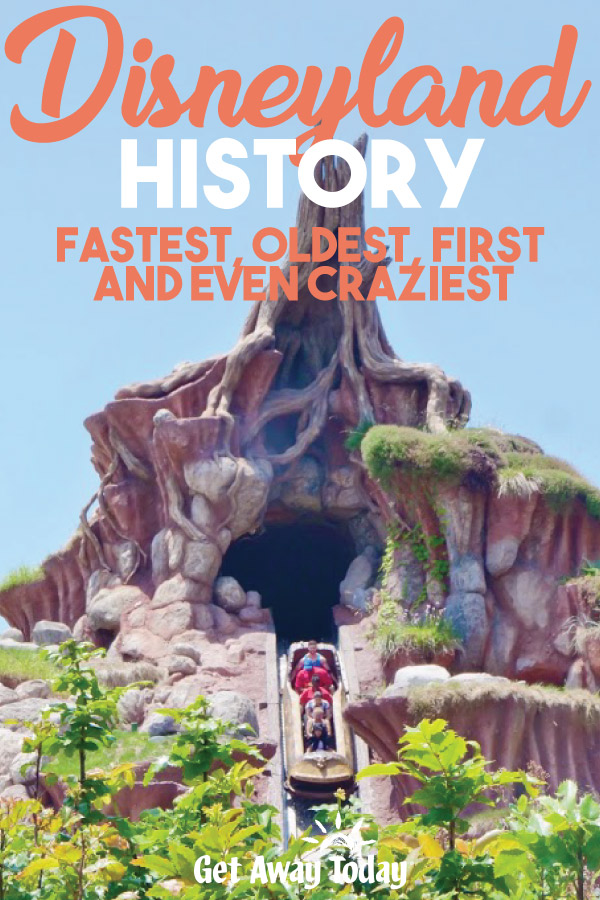