UPDATED FEBRUARY 2020 At Get Away Today we're always asked about the Hotels of the Disneyland Resort. What makes them different from other hotels? What makes them different from each other? Is it worth it to stay there? Today I'd like to do a hotel-by-hotel comparison and show you some of the similarities and differences that make the Disneyland Resort Hotels so awesome. 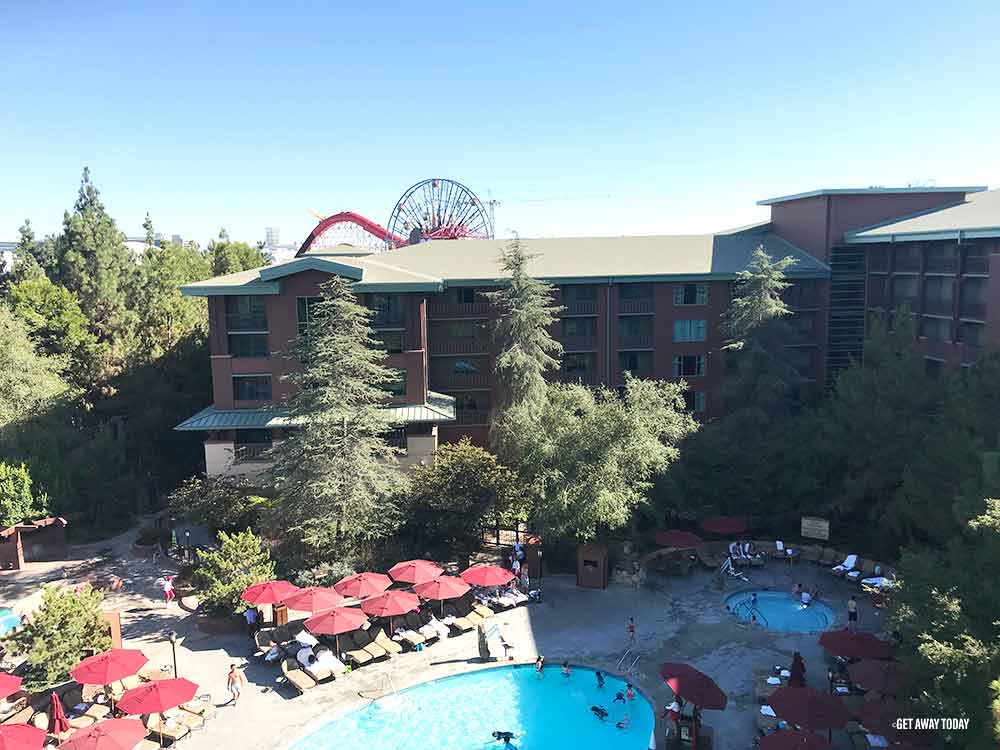 What's the Difference between the Disneyland Resort Hotels?

There are many things that set the Disneyland Resort Hotels apart from other neighboring hotels near Disneyland. Most of all, they are known for their location and exclusive amenities to guests staying at all three hotels.

These exclusive amenities include Extra Magic Hour, which is early entry into a theme park each day of their stay. Days rotate between Disneyland Park and Disney California Adventure Park, so you'll always want to check the calendar. Staying at one of the three Disneyland Resort Hotels is also the only way to get early entry into Disney California Adventure Park - a huge benefit.

The Key to the Magic Card is another exclusive benefit allowing guests at the theme park to have their purchases sent directly to their hotel instead of carrying around everything all day long. Guests at all three hotels also have convenient access to Character Dining on-site, bedtime stories told by Disney Princesses on TV nightly, and wake-up calls from Disney Characters each morning.

The differences between the three Disney Hotels mainly include theming, room size, amenities, location and price. Here is what makes each hotel stand out from the others:

Theme: The Grand Californian is meticulously California Craftsman themed and features a huge lobby with a warm fireplace and hearth, with chairs for lounging and warming up on cold days. The lobby also features seasonal decor and goes all out for Halloween Time and the Holidays. You'll find stunning works of art including a giant gingerbread house, themed cakes and a floor-to-ceiling Holiday tree. The hotel is surrounded by a mini forest of pines and aspen trees, providing a feeling of relaxation and seclusion. 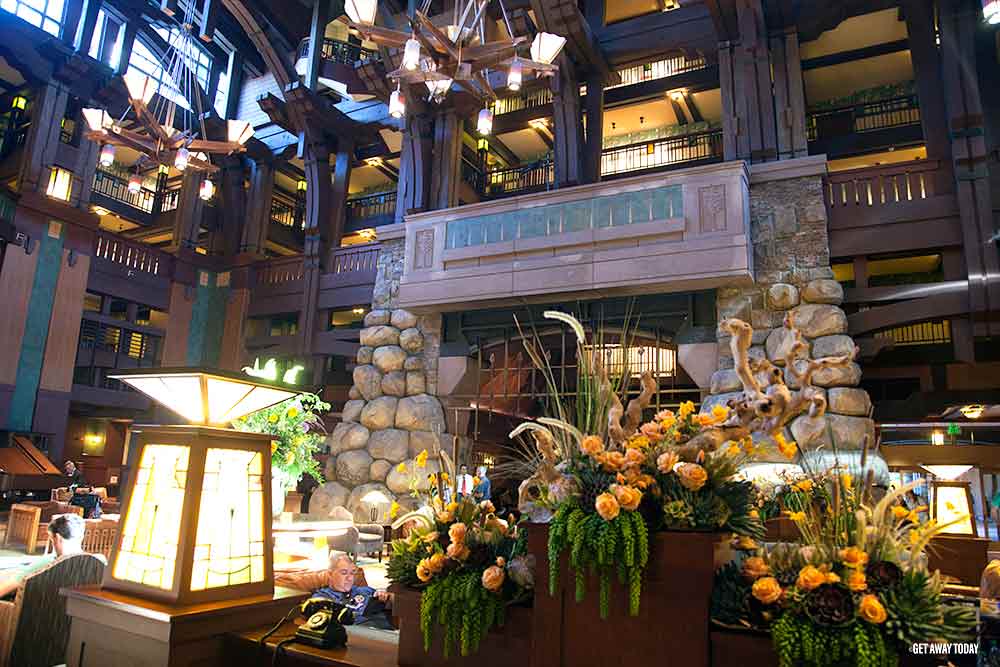 Rooms: The rooms at the Grand carry the Craftsman feel as well. Most rooms have two queen beds and, in true woodsy fashion, the hotel offers a sleeping bag and pad in lieu of a roll away beds. Select rooms include spa-like walk-in showers, Disney's signature h20 bath products, a mini fridge and a balcony for taking in the beautiful property surrounding the hotel.

Amenities: Disney's Grand Californian offers the most recreational amenities on-site including three swimming pools and a newly renovated spa. Guests can enjoy a nightly turndown service that includes a little treat, as well as live piano music in the lobby during the day. Grand Californian onsite amenities also the Art of Craft Tour so you can learn more about the Craftsman movement and its influence in California and beyond. This Disneyland Resort Hotel also offers The Grand Quest, a scavenger hunt that's recommended for ages 3 - 12. Guests who complete the hunt earn a treat from Guest Services, and no advance reservation is required to participate. While other hotels do offer the trivia challenge in the Parks, the Grand Californian is the only one with their own in-house scavengar hunt.

Character Dining: Mickey's Tales of Adventure Breakfast is served inside Storyteller's Cafe daily. It is the most intimate of the Character Dining experiences and features some of the rarely seen Disney Characters. Guests can order off an a la carte menu or dine at the Farmer's Market Buffet. The Grand Californian is also home to Disney Princess Breakfast Adventure, one of the newest Character Dining options available. This experience gives guests a chance to meet and greet Disney Princesses while enjoying a delicious meal.

Location: The Grand Californian is the only hotel located inside Disney California Adventure Park, or any theme park for that matter!  Guests staying here have a private on-site entrance to the Park and can access Disneyland by cutting through Disney California Adventure Park (normally the quickest), or through the Downtown Disney District either by foot or via the Monorail. With valid theme park admission and your hotel room key card, you can access the Parks early for Extra Magic Hour, and conveniently return to your hotel any time for a break during the day, or to turn in for the night.

Theme: The Disneyland Hotel celebrates classic Disney magic and nostalgia throughout the entire property. Each of the three towers is themed after a land in Disneyland Park and guests can relax in giant tea cups in the lobby. Even if you didn't visit the Resort "back in the day," you can appreciate the vintage decor that showcases the evolution of the Parks.

Rooms: The newly renovated guest rooms are amazing and the most "Disney" of all three hotels. My favorite touch is the carved Sleeping Beauty Castle headboard that lights up and plays music. With the touch of a button, you can sing along to "A Dream is a Wish" as your headboard comes to life. Most of the rooms at the Disneyland Hotel come with two queen beds. Many rooms include a shower/tub combination, so you can easily bathe little ones after a fun-filled day in the Parks. For your convenience, rooms at the Disneyland Hotel include a mini fridge, and if you need a crib you can request one from the front desk. 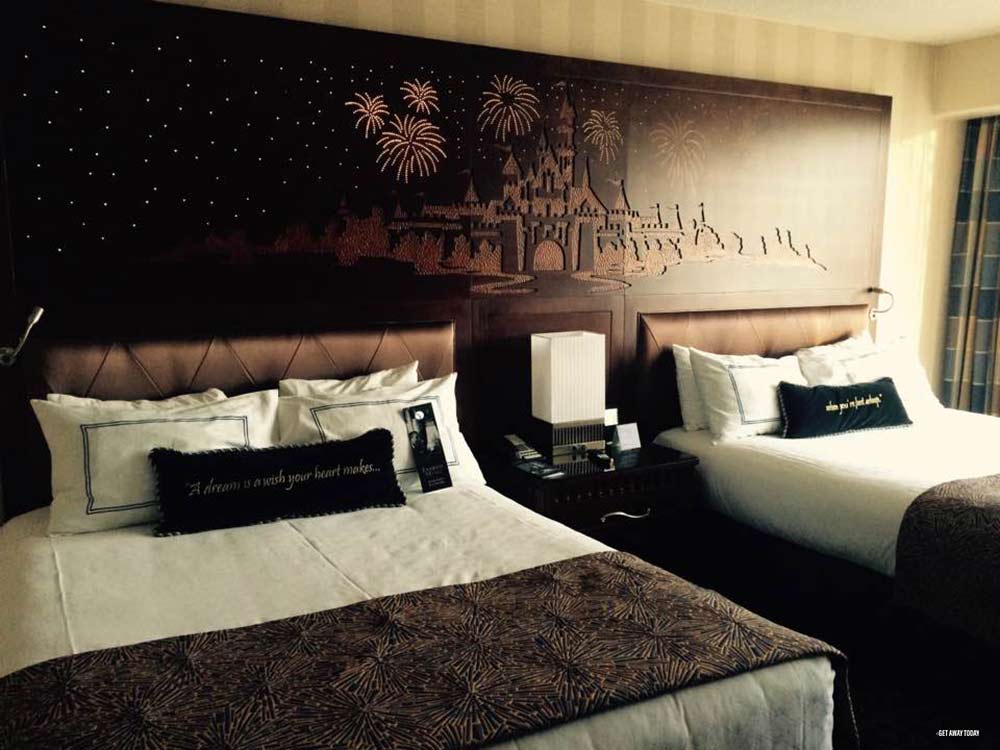 Amenities: In my opinion, the Disneyland Hotel has the best swimming pool areas. An E-Ticket and D-Ticket pool offer plenty of space for swimming and splashing. The main attraction though is the Monorail Pool with two Monorail water slides. At night the pool area transforms with tiki torches from the nearby Trader Sam's Enchanted Tiki Bar lighting the area and live island music filling the air. I love it! 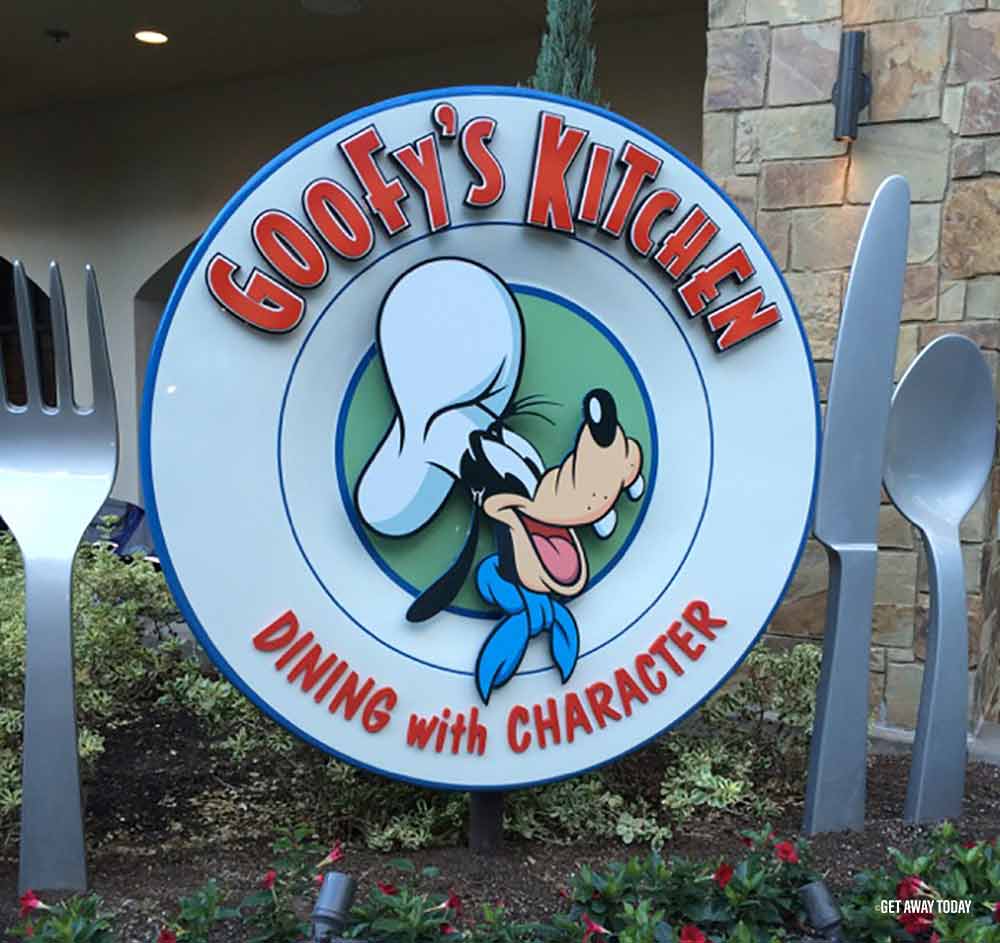 Location: Tucked at the end of the Downtown Disney District, the Disneyland Hotel is the farthest of the three Disney Hotels from either theme park's Main Gate. Not to worry though, guests staying here can ride the Monorail from Downtown Disney directly into Tomorrowland.

Price: The Disneyland Hotel is priced right in the middle between the Grand and the Pier. 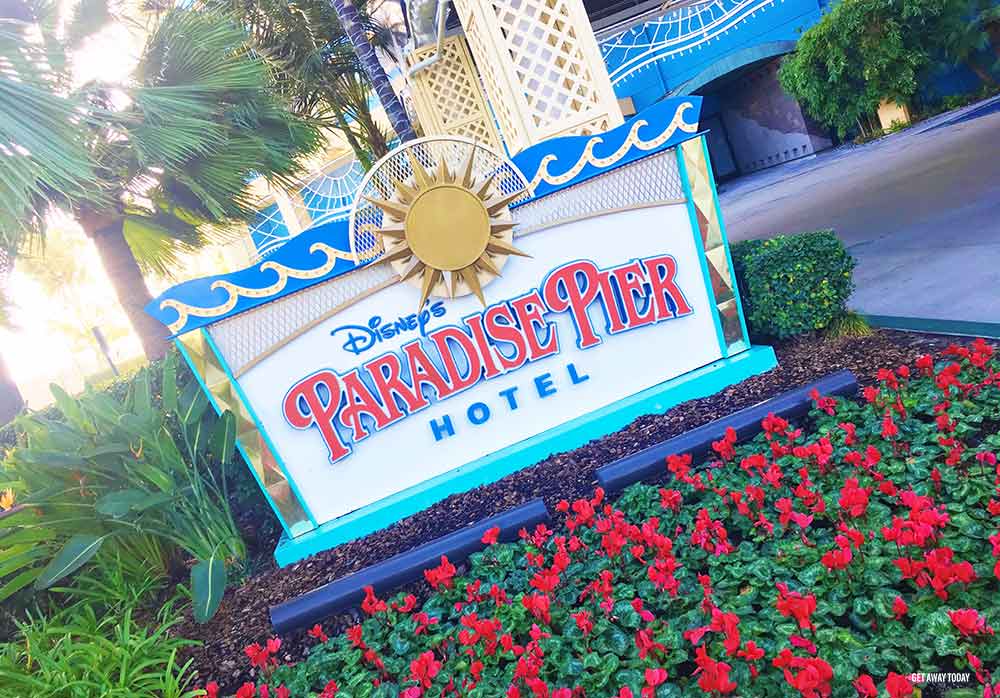 Rooms: The rooms at Disney's Paradise Pier Hotel are the largest in size of the three hotels. Many of the rooms include two queen beds and a pullout daybed, making it super comfy for families.

Amenities: Although Disney's Paradise Pier offers the fewest amenities of the three hotels, it has some pretty spectacular features. The most popular is the roof-top boardwalk style swimming pool and water slide. Its pool deck even has a pretty great view of the Disneyland fireworks with piped-in music. There is also Paradise Theater, where young guests can enjoy beach-themed accommodations for indoor movie viewing.

Character Dining: Disney's Paradise Pier offers Donald Ducks' Seaside Breakfast (or Brunch) which may include a visit from Stitch!

Location:  Disney's Paradise Pier Hotel is located directly across the street from the Grand Californian. Guests staying here have easy access to the parks through the Downtown Disney District either by foot or Monorail. It should be noted that guests are not able to use the Grand Californian's entrance into Disney California Adventure Park, but they are able to use it to walk back to Disney's Paradise Pier.

Price: One major draw to the Paradise Pier is that although no less magical, it offers the lowest prices on hotel rooms.

So, that is a pretty good summary between the three hotels. There isn't one that is better than the others, it really just boils down to personal preference.

Book your trip to the Disneyland Resort

If you've been wanting to stay at one of the Hotels of the Disneyland Resort, now is the time to try it out. Get Away Today will always make sure you have the best price on your vacation. You'll always save the most when you get your tickets to the Disneyland Resort as part of your package with Get Away Today. You can check out our Disneyland vacation packages online or call our Reservation Specialists at 855-GET-AWAY! 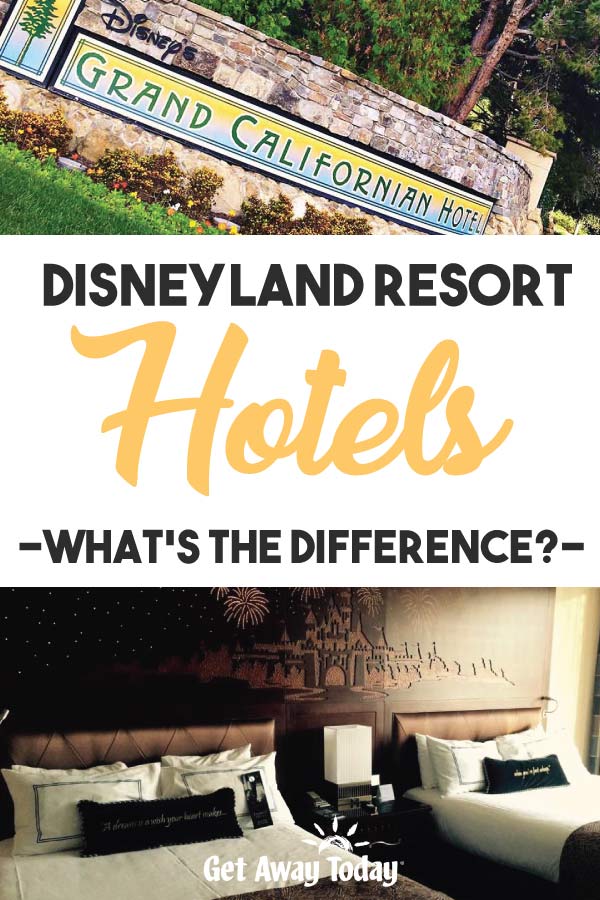 Check out these great videos of the Disneyland Resort Hotels: