UPDATED December 6, 2021: As of December 8, 2021, Disney's MaxPass and FastPass service have been replaced by Disney Genie and Disney Genie+. To learn more about this new offering, check out our in-depth article by clicking HERE. There have been so many changes happening at Disneyland, including the roll-out of both the digital FastPass system and MaxPass program. If you’ve been wondering what the difference between the two is, we’ve got you covered. Read on for an in-depth look at Disneyland’s digital FastPass versus MaxPass on cost, procedures and more.

Since the two systems began so close to each other, there have been a lot of questions. We've had a lot of guests that aren't sure which is which or what either of them really include. While we do have separate articles on each - click to read our digital FastPass article here or click to read our MaxPass article here - we wanted to compare the two side-by-side in the same article. Here is our comparison of the digital FastPass and MaxPass, broken down into our most FAQ categories: 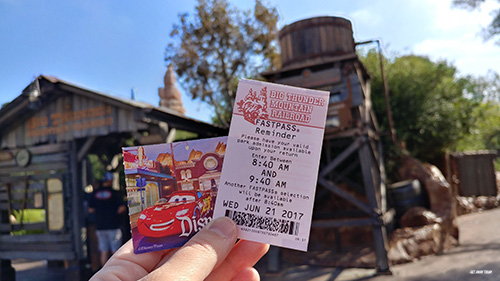 MaxPass, however, is an optional service that you can choose to pay for. It is currently priced at $20 per person per day. This is subject to change. It is not automatically included with your ticket and will need to be purchased via the Disneyland app when you are in the park. It’s important to note that you do not have to purchase it for every day of your ticket. Instead, you are able to pick and choose which days – if any – you would like to add it to your ticket. 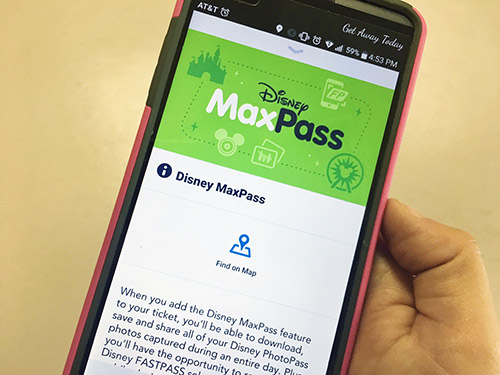 From the previous section, we’re sure you’ve noticed that a smart phone is needed to use MaxPass. If you are using MaxPass, you will need to have a smart phone with the up-to-date Disneyland app installed. The app is where you will scan your ticket and select your FastPasses when using MaxPass. Do you have someone in your party too young for a phone? That’s not a problem – only one smart phone is needed per party to use MaxPass. Just scan every ticket into the app and you’ll be good to go. The opposite – having multiple people in your party with smart phones – works as well. All you have to do is scan your ticket into your phone and anyone else’s phone who may be scheduling FastPasses that day. This doesn’t allow you to hold multiple FastPasses, but will connect everyone.

The digital FastPass system doesn’t require a smart phone to use. All it takes is your Disneyland ticket and the FastPass kiosk machines at FastPass enabled rides. Phones are still great to bring though – especially for using the other aspects of the Disneyland app. The Disneyland app itself is free to use. You can make restaurant reservations, check wait times and even see FastPass return times.

UPDATE: You are now able to scan your smart phone to redeem digital FastPasses as well. To use this feature, you will need to make sure your ticket is scanned into the Disneyland app to link it. You still will not be able to schedule your FastPasses on the app without paying for MaxPass, but will be able to keep track of and redeem any FastPasses you have scheduled at the kiosks. 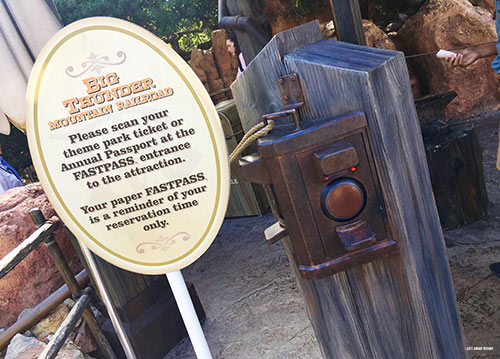 MaxPass users will also head to the ride’s FastPass entrance. However, they have two options. They can either scan their phone (once for everyone in the party) or the park ticket that is connected to MaxPass on the Disneyland app. This makes it great for families with older kids. If you’re all together, just have the phone holder scan their phone for each rider. Letting the kids have a bit of freedom? They can scan their park ticket instead to redeem the FastPass you made for them in the app earlier. Either way, don’t forget to schedule your next FastPass on the app while standing in line!

Besides the cost and need for a smart phone, there’s something else to consider when looking at Disneyland’s digital FastPass versus MaxPass. When you purchase MaxPass, you get more than just the ability to book FastPasses on your phone. You also get unlimited downloads of any PhotoPass pictures snapped on the day you’re using MaxPass. That means you won't just save time on FastPass retrieval - you’ll also have even more picture proof of all the fun you had on your Disneyland vacation. 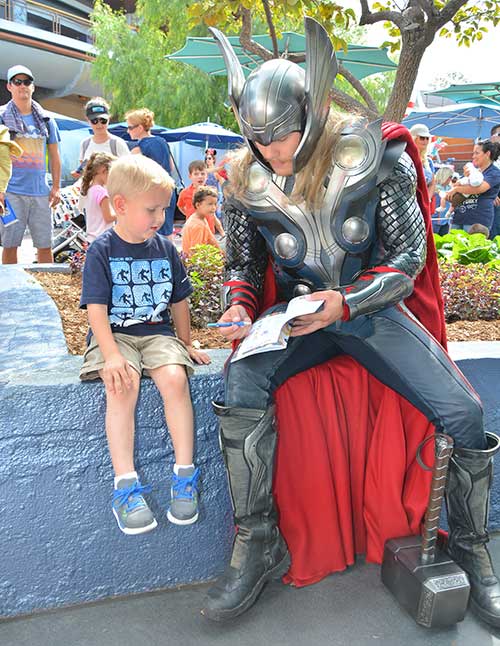 The digital FastPass system does not include PhotoPass. However, PhotoPass can be purchased separately from Disneyland directly. Prices vary based on whether you purchase it per day or per week. If you do not purchase PhotoPass, you are still welcome to use the PhotoPass photographers. They are usually more than happy to snap a picture with your own camera or phone.

To recap our look at Disneyland’s digital Fastpass versus MaxPass, here are the most important things to remember:

Attractions and Shows available for FastPass:

We hope this look at Disneyland’s digital FastPass versus MaxPass was helpful and answered all of your questions. Do you have a question we didn’t answer? Let us know below so we can update the article to include it. 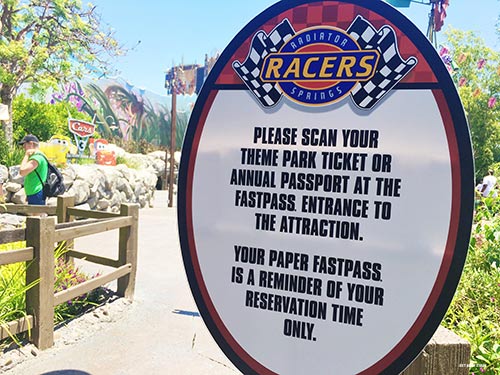 Haven’t experienced either the MaxPass or digital FastPass system at Disneyland yet? That means you need to book your next Disneyland vacation! You can get the best price on your Disneyland package when you take advantage of our discount Disneyland tickets and reduced rates for hotels near Disneyland. Book online or give our travel experts a call at 855-GET-AWAY.

Check out these other great articles:
Everything You Need to Know About the Disneyland MaxPass
NEW: Disneyland's Digital FastPass System
Your Guide to the Changes Coming to Disneyland 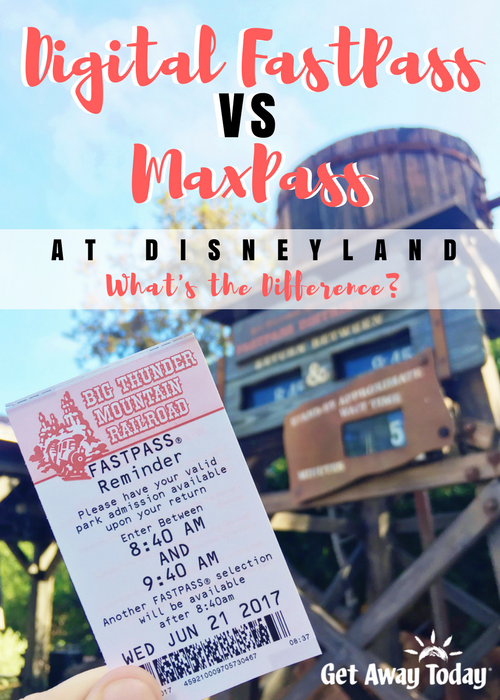 Katie- Great question! We know Tomorrowland has a new centralized kiosk that allows guests to use their phones to scan for FastPass requests (as long as your Disneyland ticket is already linked). This kiosk offers FastPass requests for Autopia, Space Mountain, Buzz Lightyear Astro Blasters and Star Tours from the touch screen system.

They now have some rides that don’t require a ticket for getting a fast pass. For example, Cars Racers and Space Mountain allow you to scan your phone at the kiosk to get a fast pass. You don’t need the physical tickets. Do you know of any other rides that offer is now? Last time we forgot to bring our physical passes and has to only use our phone for everything.

Mary - For FastPass or MaxPass at Disneyland Resort, there are no wristbands. It can all be linked to your tickets in the Disneyland app. Hope this helps!

So you don't do the Disney wrist bands like before?

Melanie- Thanks for your question about MaxPass! MaxPass makes it more streamlined to request a Fastpass, as you can do so electronically from anywhere within the Resort. In that sense, it does shorten the amount of time you have to wait to get a Fastpass. But are you referring to something else with your question?

I've heard the Maxpass shortens the amount of time you have to wait to get a new fastpass, but I can't find any info about that online. Do you know if that's true?

Deanna- As of now, a MaxPass can be used to redeem FastPasses for about 20 rides. You can find a list here: https://www.getawaytoday.com/travel-blog/disneyland-fastpass-tips-you-need-to-know

How many rides can you use the Maxpass for? Is it unlimited rides or only 3 like fastpass?

Can I include more then 1 maxPass in my phone ???

We used the digital FastPass system NOT the MaxPass system last week, it saved our family $240.00 by not using it. We were still able to use our smart phones to check in. It was more convenient to do so. All you need to do is use the Disneyland app and "link tickets". It kept track of what fast passes that we had currently. If we had more than one in our que, it would always show which one was ready to be used. We simply sent a runner to get the new ones... they kept all the tickets with them to acquire new passes. We didn't miss the pictures as we used our own cameras.