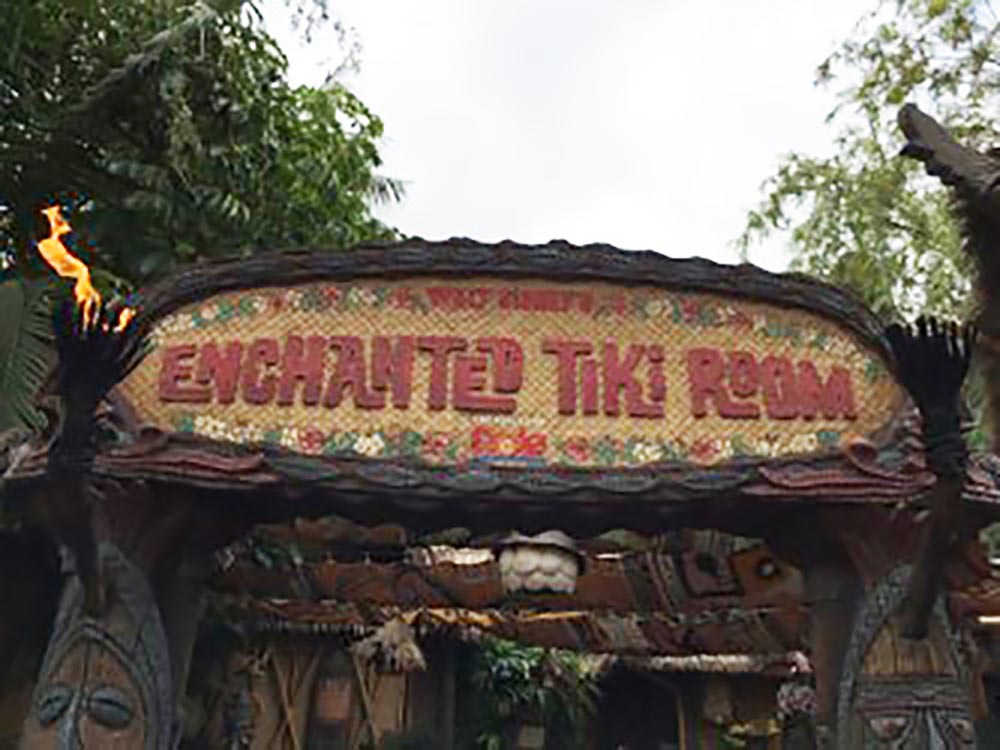 15 Secrets of the Tiki Room Disneyland

Stop by a classic Walt Disney attraction in the Disneyland Resort. The Tiki Room Disneyland features over 220 birds, flowers and totems that sing and perform in a traditional Hawaiian ceremonial hut, complete with shields, torches, tikis and mystery that are so special that if they were not performing, they would be in the audience too. 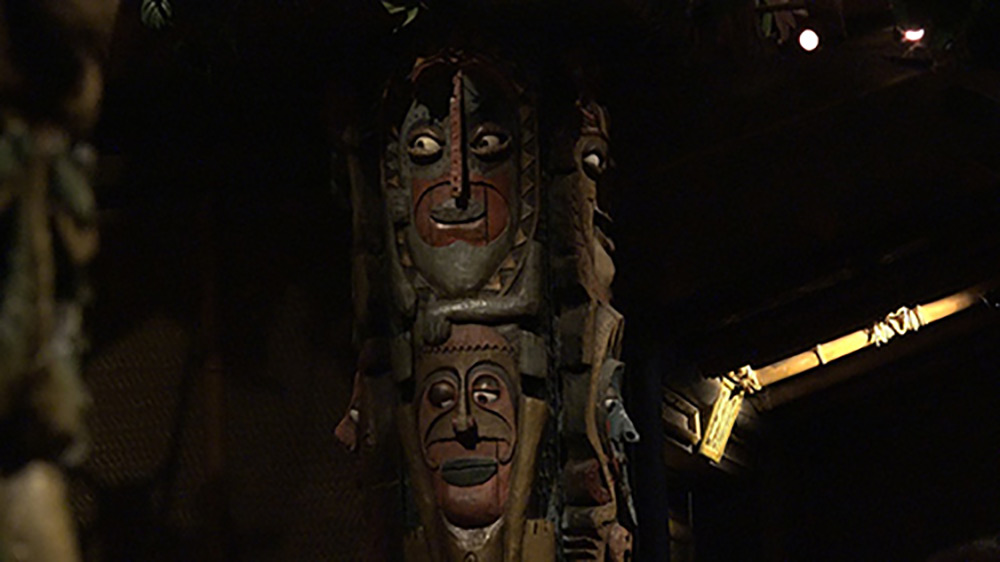 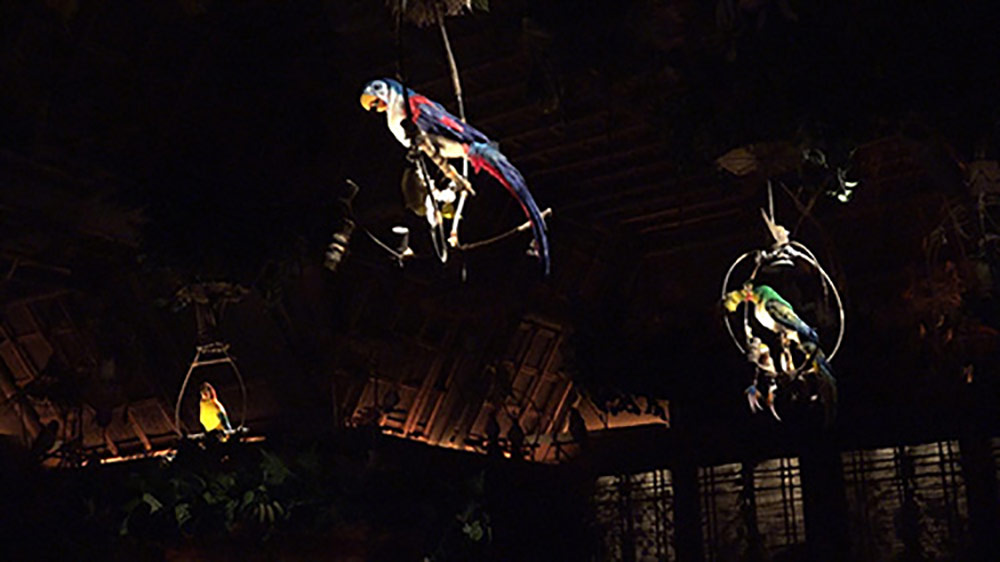 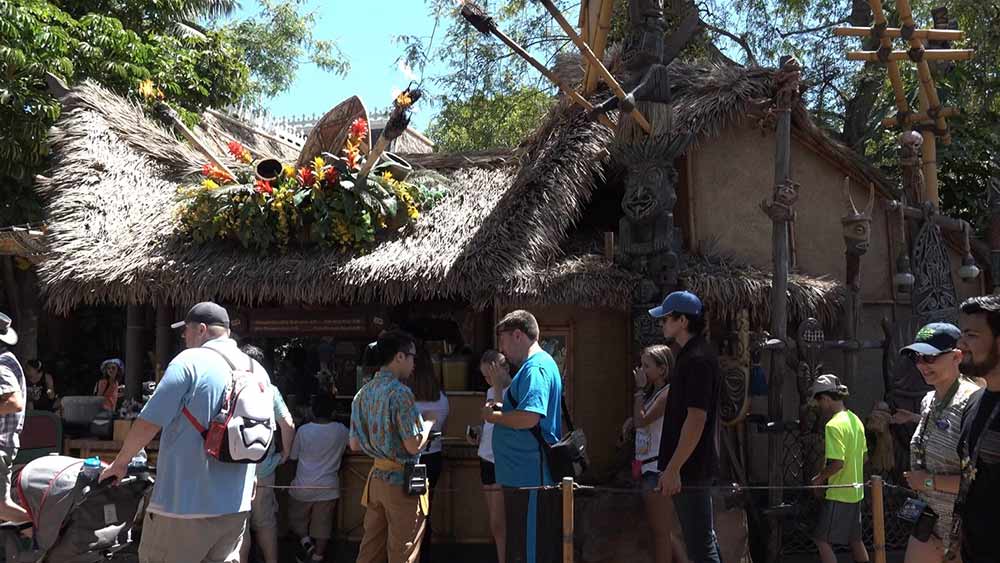 Photo credit:  Bill Francis
5. The best treat at Disneyland? It's found at the Tiki Room. The magic of the Tiki Room begins as you approach the snack bar is where you will find a Dole Whip or a Dole Float. Cool down with traditional Hawaiian pineapple soft serve ice cream. Or, make it a float and add fresh pineapple juice. It certainly is a great way to start your Hawaiian adventure. “Welcome to a tropical hide away – you lucky people you” indeed!  Unlike other attractions, you are encouraged to take your dessert into the attraction to enjoy it during the show! Plus, you can mobile order this Disneyland treat and avoid the line at the Tiki Juice Bar.

6. The idea of the Tiki Room started in New Orleans, LA.  According to Disney’s archivist Dave Smith, while on a trip to New Orleans, Louisiana, with his wife, Lillian, Walt Disney found a mechanical bird in a bird cage. He was so entertained and filled with wonder that he wanted to know how the bird worked. He carried the toy home, gave it to his Imagineers and challenged them to figure out how it worked.  Imagineers including Marc Davis and Rolly Crump not only figured it out, but made them better and created life-size and life-like birds, flowers and tikis.
7. The four main characters found in the Tiki Room Disneyland are macaw parrots which represent Mexico, Ireland, Germany and France. The main characters' plumage are colored like the country flags and have accents to match. Jose has red, white and green feathers and features a Mexican accent. Michael, who speaks with an Irish accent, has green and white plumage. Fritz, the German bird, has red, yellow and white feathers. And finally, Pierre sports red, white and blue plumage and speaks with a French accent.

Photo credit:  Bill Francis
8. You've got 18 seconds to start time. Upon entering the Tiki Room Disneyland, once everyone is seated, the cast member pushes a button and then has 18 seconds until the show starts. Walt Disney started the tradition of using a baton to tap on Jose’s perch telling him to wake up! This prompts Jose’s venerable reply, “AAHHHH! My siestas are getting shorter and shorter!”
9. Sing like a bird and a famous 1960’s icon!  Experiencing the Tiki Room through “1963 eyes” can create a magical experience! Guests still gasp in amazement when the “Glee Club” drops from the ceiling. Collette, Fifi, Gigi, Josephine, Mimi and Suzette lead the entire audience in “Let’s all Sing like the Birdies Sing.” Jump in and sing away. It makes the experience so much fun!  Listen for the macaw hosts to mimic famous crooners from the 60’s including Bing Crosby and Louis Armstrong. 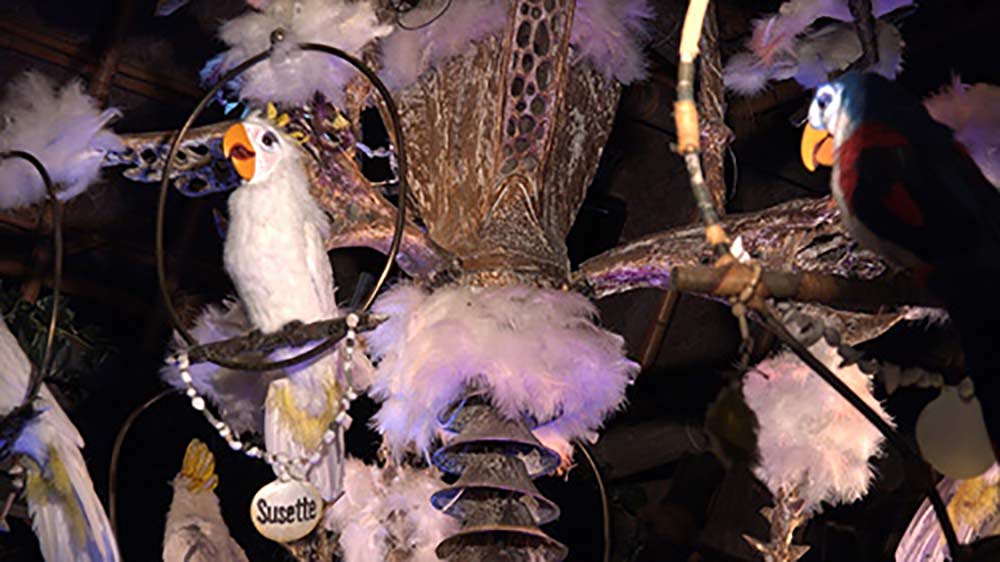 Photo credit:  Bill Francis
10. The Tiki Room Disneyland starts in the gardens outside of the attraction. The enchanted garden features Hawaiian history that describes the history of the water, sun, moon, plants, stars and Hawaiian gods. Unique animatronics tell Hawaiian history including Rongo, Kori and Maui and many others. If you haven't heard of him yet, you will. Maui is now featured in Disney’s Moana, released in 2016. 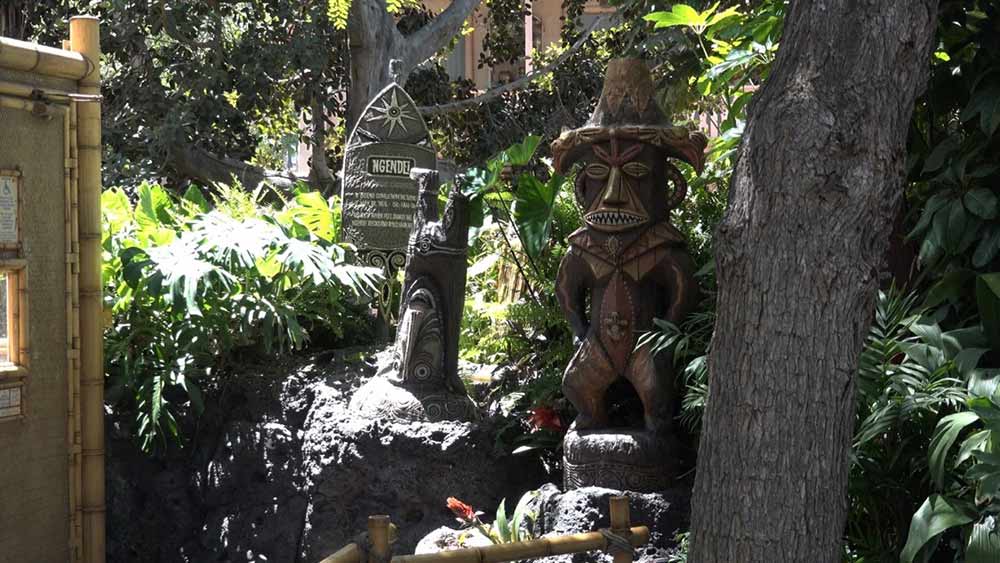 Photo credit:  Bill Francis
11. “The gods are upset by all of the celebrating!”  At the pinnacle of the show when all of the birds, tikis and flowers are performing, a thunderstorm curses the Tiki Room. Its hosts blame the Hawaiian gods that can be seen in the courtyard. Many guests wonder how the trick is performed. Water simply falls between two panes of glass and creates an incredibly life-like storm.
12. Watch for the water fountain effect. The perfect stream of water that introduces the “Glee Club” in the middle of the room is achieved by a clear tube. The falling water hides the tube and makes it appear like the water is defying gravity.
13. The Tiki Room used to require an extra charge. And... had a famous barker bird. Boardwalk barkers have always been a mainstay of carnivals to encourage guests to visit their attraction. Mr. Potato Head serves the role well at Toy Story Mania in Disney California Adventure Park. When the Tiki Room first opened in 1963, there was an extra charge to visit the Tiki Room. A “barker bird” was placed near the Adventureland sign to encourage park guests to visit the new attraction. The bird’s name was Juan, the cousin of Jose. Both Juan and Jose were voiced by Disney legend Wally Boag. For Disney fans, Wally was the star of the Golden Horseshoe Review that ran at the Golden Horseshoe in Frontierland a record of 39,000 times!
The world had never seen such an amazing spectacle as animatronics before  The Tiki Room, and nearly everyone wanted to catch a glimpse. As a result, Juan created such a traffic jam that Disneyland planners had to make a change and Juan was soon removed. Some Disney fans suggest that Juan was moved to the entrance of the Pirates of the Caribbean attraction as the macaw sitting on the shovel handle at the entrance. 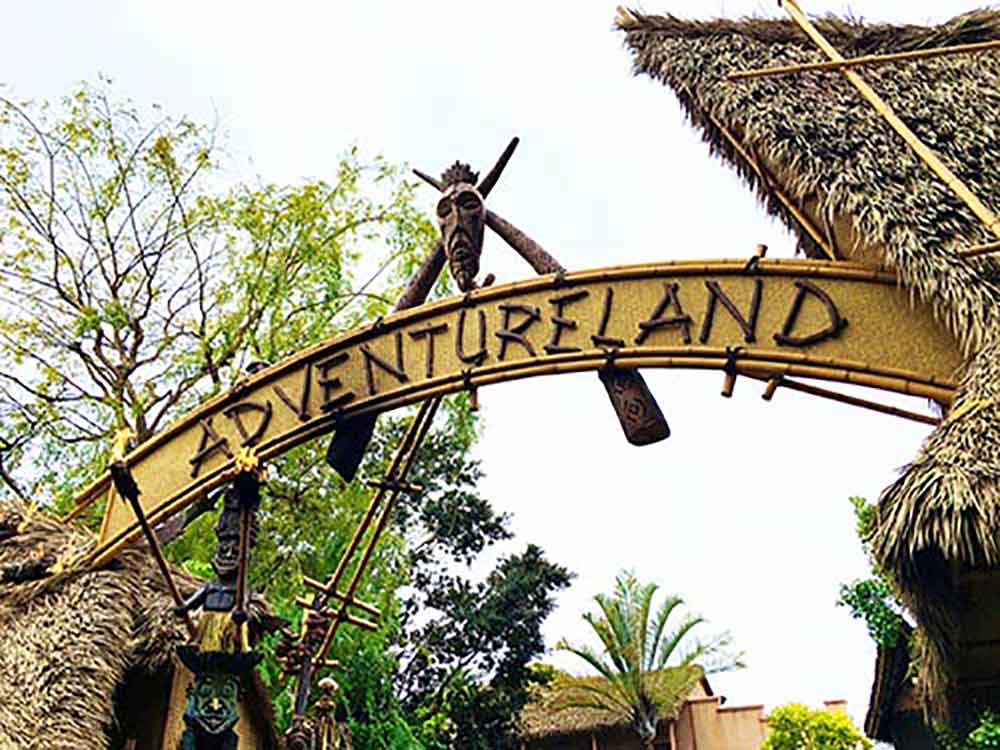 14. There are hidden secrets at the Tiki Room Disneyland. Look for the hidden Mickey in the main characters' perches. In addition, there is a tiny restroom near the entrance. It is hidden well, but kept for “emergencies.”
15. The Sherman Brothers wrote The Tiki Room theme song. Robert and Richard Sherman, known by many as the Sherman Brothers, wrote many of Disney’s famous songs. Songs include “A Great, Big, Beautiful Tomorrow” from the Carousel of Progress, “it’s a small world,” “Winnie the Pooh,” and many other Disney favorite attractions and movie songs such as the soundtrack to Mary Poppins. During production of that film, Walt mentioned that his favorite song was “Feed the Birds,” a song about taking the time to enjoy your life and to help those in need. Sometimes it only takes a few minutes and few pennies. You can “feed’ the birds and create memories at the Tiki Room Disneyland!  It is certainly worth your time.  When birds of a feather flock together, there is sure to be a lot of fun singing as the birdies sing!

Book your trip to the Disneyland Resort

Find your tropical hideaway and make your adventure magical with extra perks, insider information and secrets! Get Away Today can guide you to create a vacation that is practically perfect in every way. We'll help you with everything from discount Disneyland tickets, a list of secrets to make your trip special, and the most affordable and themed hotel accommodations. All of our Disneyland packages can be booked online or by calling our experts at 855-GET-AWAY.

This post was so helpful. I've been looking for the names of all the birds in the show for a poster I am designing and I couldn't find this information anywhere. I also got chills while I read some of these tips. What a great blog entry! Thank you!