The Southern California theme parks are full of fun year round. Each September - October, the theme parks celebrate the season. Halloween celebrations range from slightly spooky fun for the whole family to downright terrifying. No matter what type of Halloween fun you're looking for, you're sure to find it in Southern California. Here is an overview of what you can expect:

Halloween Time at the Disneyland Resort is easily one of the most popular seasons to visit the parks. It is as family friendly as it gets and is included with your regular theme park admission. Each year there seem to be more pumpkins and not-so-spooky surprises. Haunted Mansion Holiday, Space Mountain: Ghost Galaxy, the Pumpkin Festival on Main Street and other annual favorites begin September 12 and go through Halloween Night. 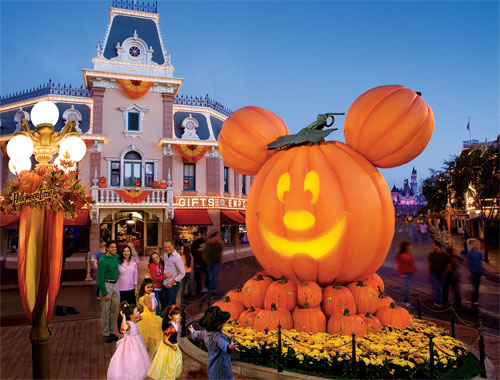 SeaWorld's Halloween Spooktacular is another family-friendly affair that becomes more popular each year. This year should be even more exciting than normal with their 50th Anniversary Sea of Surprises taking place all year long. The SeaWorld Spooktacular is held  weekends September 27 - October 26 and features Halloween themed versions of Sea Lions LIVE, costumed characters and even trick-or-treat stations. Admission is included with regular ticket admission.

Each Saturday night in October (and the 10th and 17th, which are Fridays), LEGOLAND stays open late for a festive Brick-or-Treat! Costume contests, 10 LEGO themed treat stations, Halloween themed entertainment and even fireworks make this the perfect way to build Halloween memories. The event takes place from 5-9pm and requires separate admission for the party.

Universal Studios Hollywood's Halloween Horror Nights turns your favorite horror flicks into reality before your eyes on select nights after the park closes. New mazes will feature THE PURGE: ANARCHY, Syfy's Face Off and From Dusk Till Dawn. A terrifying maze based on AMC's The Walking Dead is being resurrected this year as well. Because of the intense nature of Horror Nights, children under 13 are not recommended. Separate admission is required.

Whether you're looking to get scared silly or just want some family friendly silly fun, we'd love to help you get into the spirit of Halloween this year with your Southern California vacation! Book online or call our vacation experts at 855-GET-AWAY!