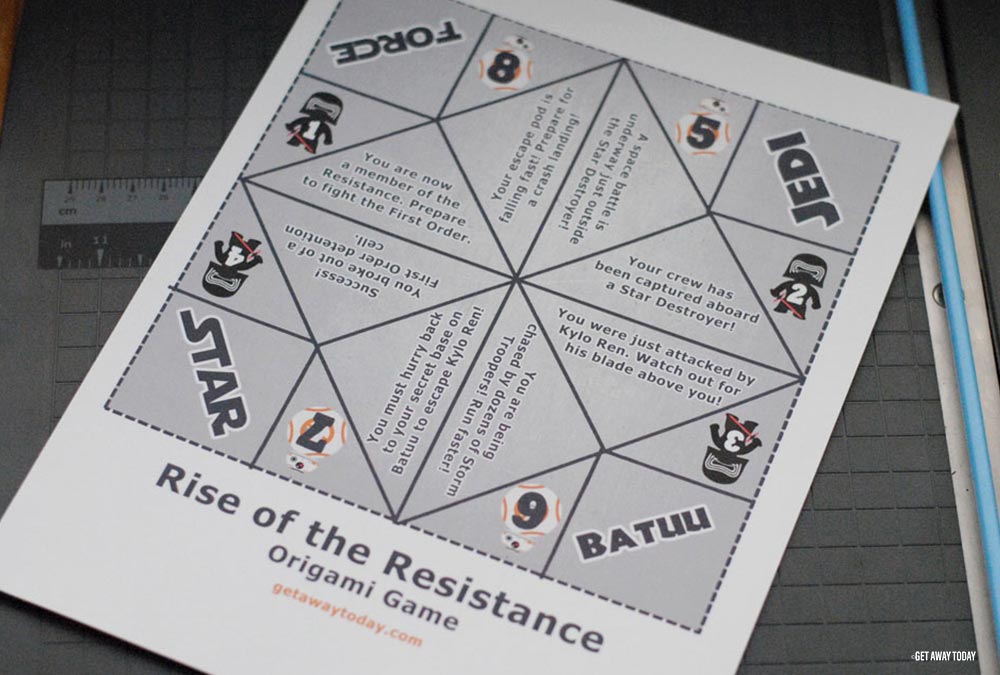 There is talk that the new Rise of the Resistance attraction at Galaxy's Edge is the best theme park ride in the world! That is a pretty awesome statement. Have you had the chance to experience it yet?

The ride is almost 20 minutes long. Guests have the chance to be fully immersed in a Star Wars themed story. It is the only attraction in the world with this type of format and technology! It is exciting, thrilling, entertaining, visually stimulating and surprising. All without coming across too scary or overwhelming for children.

I'm sure some Star Wars fans want to keep all of the details about the ride a secret. This post doesn't have any major spoilers! But, there are some elements of the ride that are exposed. So, beware!

It is going to be several months before my family is going to be at Disneyland for our first vacation to Galaxy's Edge. September can't come soon enough! So, I decided to create a little Star Wars: Rise of the Resistance game for my boys to give them a little taste of the action. They love playing with the origami Rise of the Resistance Game. I think your crew will enjoy it as well.

Cut around the edges of the template. It will make a square. 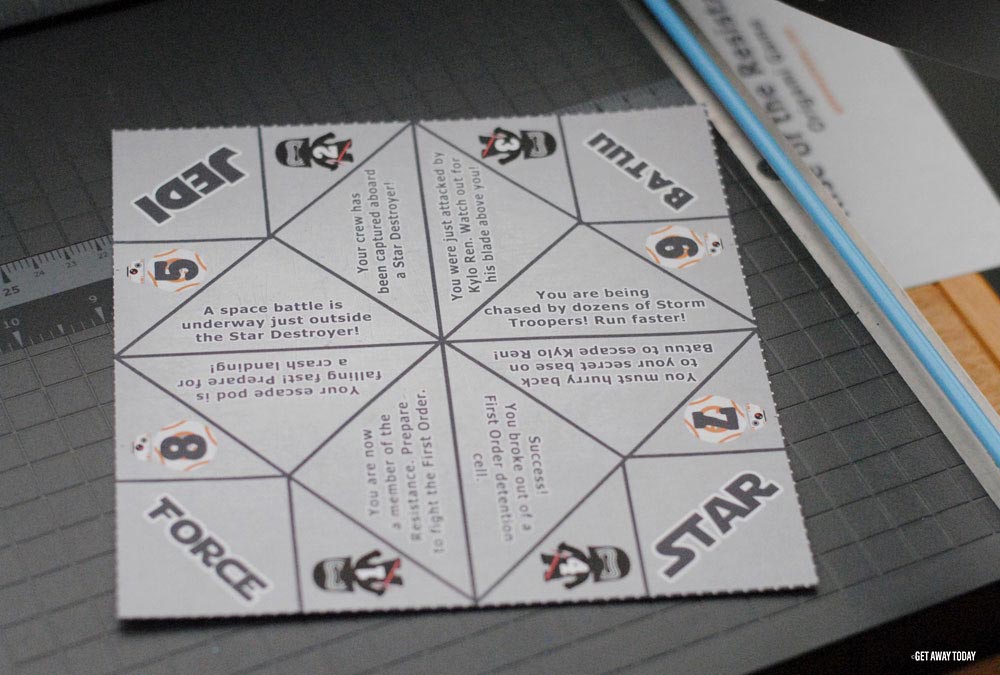 Fold the template in half. Make a nice crease. Then, change the direction and fold it in half again.

Open the template and place it so the printed side is face down on the table. Fold each of the four corners in to the center. Make a nice crease on each fold line. 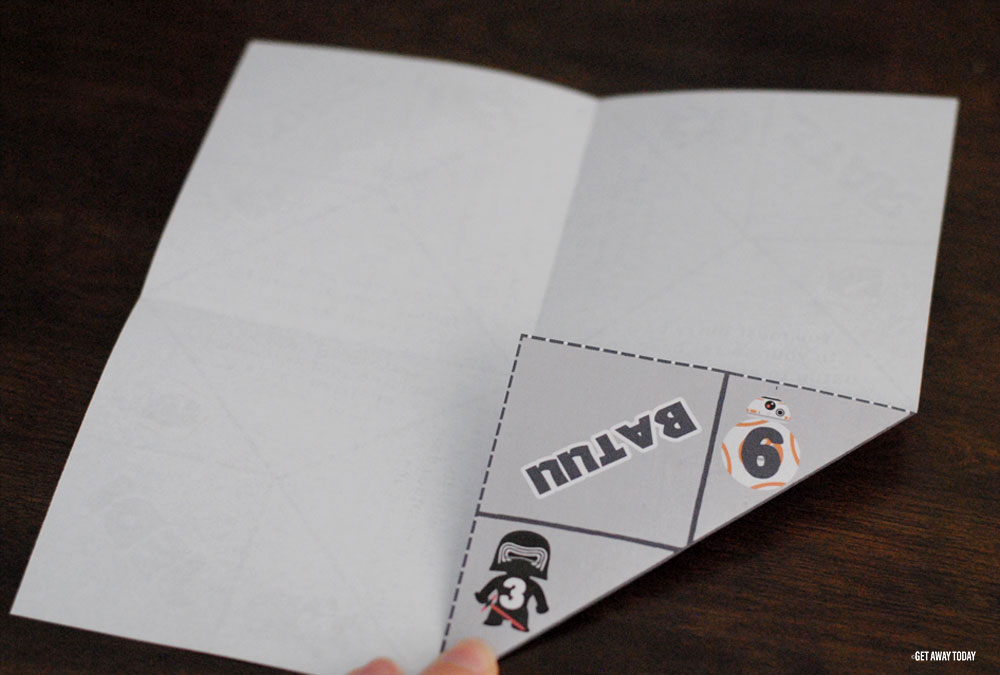 Turn the template back over. Fold the corners into the center a second time. This will make a nice small square. 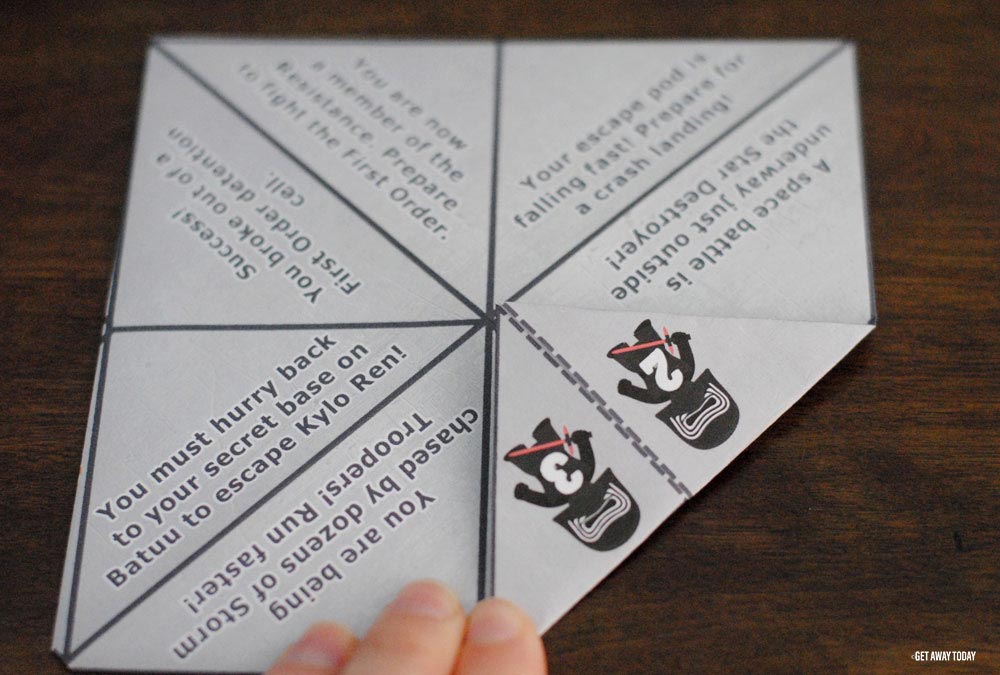 Then, fold it in half again. Make the creases nice and firm. 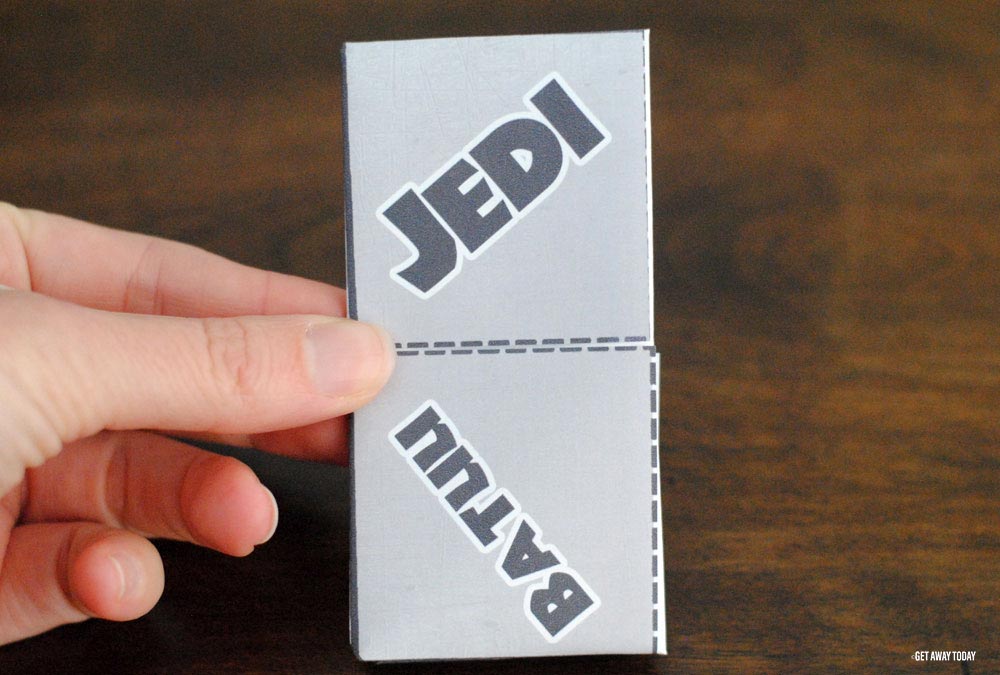 The last step turns the Star Wars printable into a 3D game. Slide your fingers into the slots under each of the big words. (Batuu, Jedi, Star, and Force) Then, press up and in to make the center points come forward. 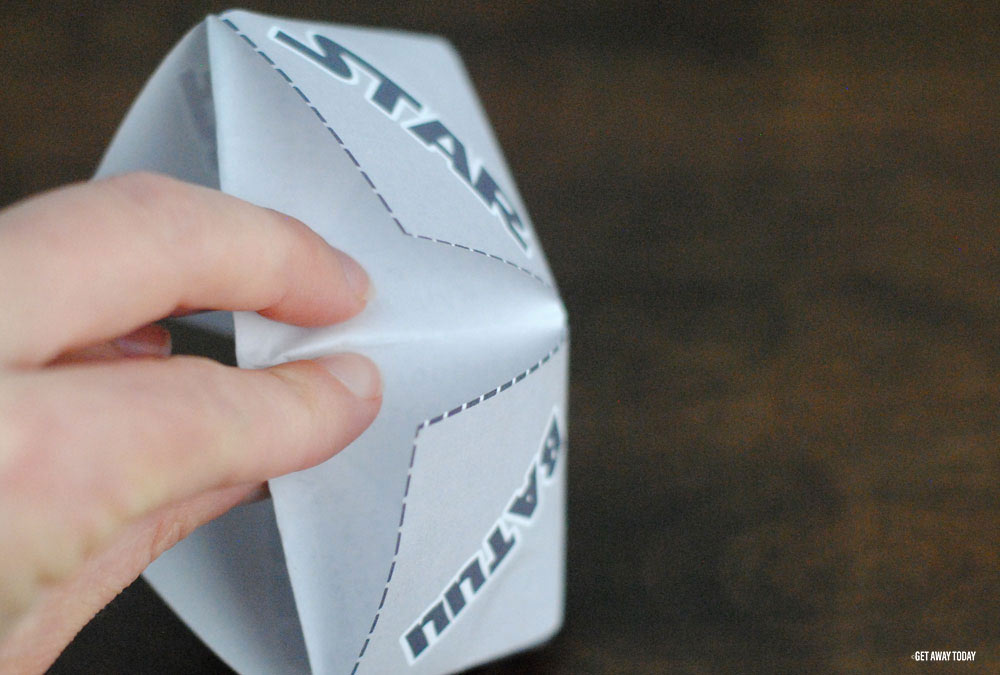 The game is ready! This works like a traditional "fortune teller" or "cootie catcher" in origami. Here is how you play! 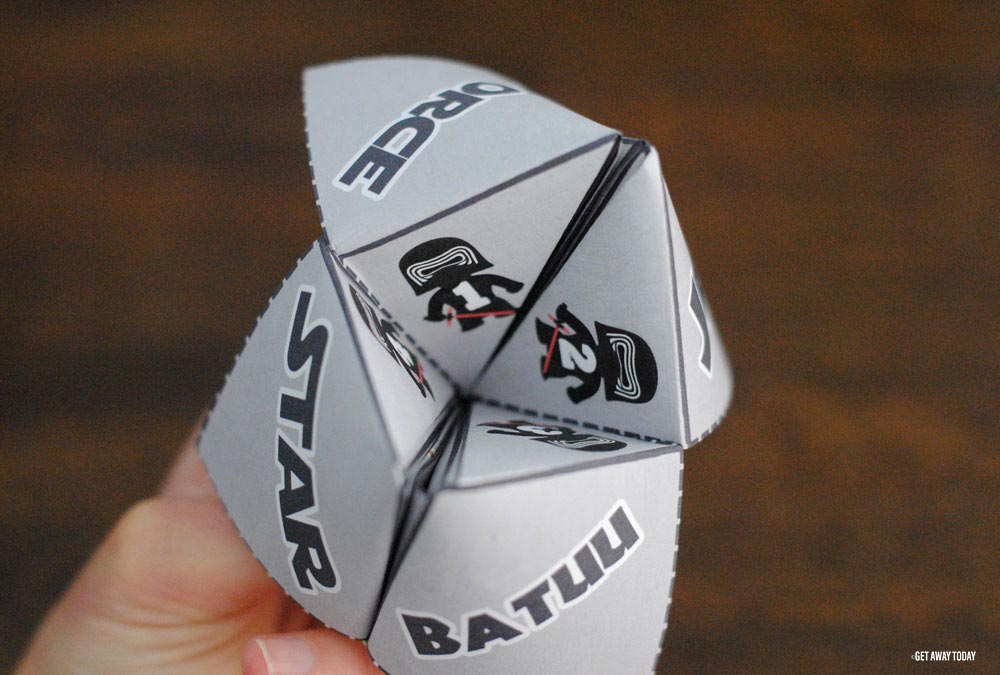 1. Find a friend and ask them to pick one of the words listed. (Batuu, Jedi, Star, and Force)

2. Move the flaps in and out and side to side in time with the letters in the word. For example, if the player chose the word "Batuu" you would move the game five times because there are five letters in that word.

4. Move the flaps in and out and side to side (alternating directions) as many times as the number that was chosen. Repeat this step again. 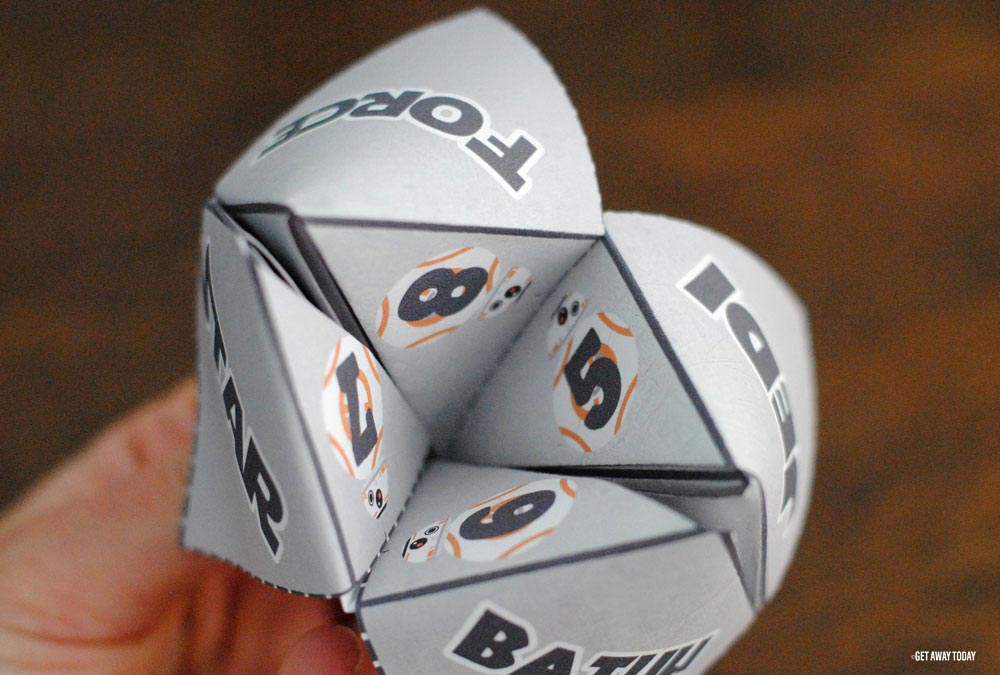 5. Let the player choose a number again. This time, unfold the flap to reveal the words written under the chosen number. 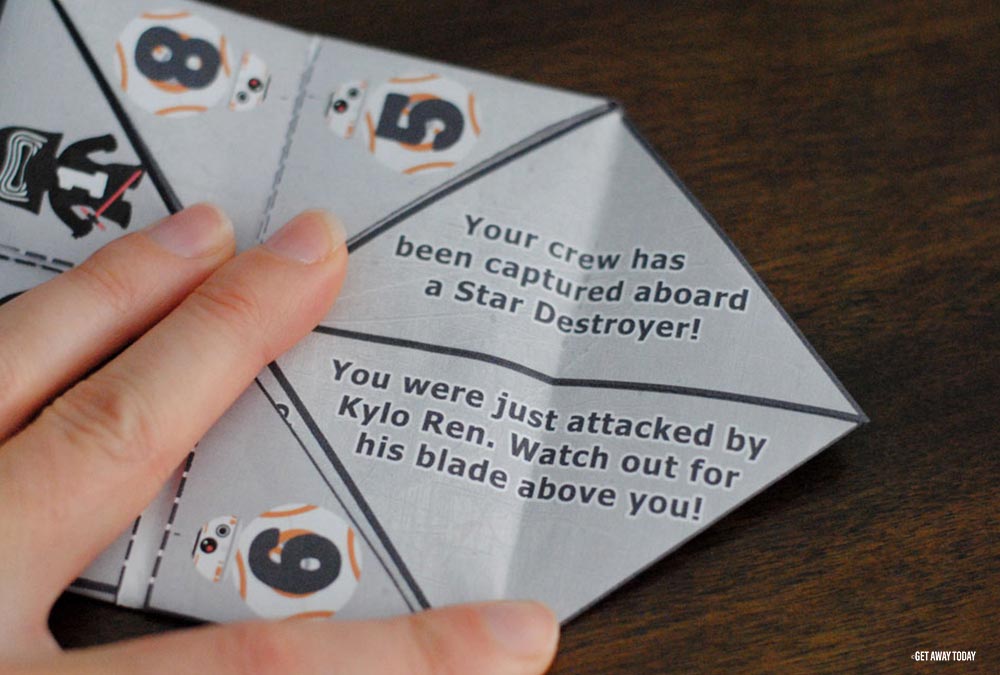 6. Read the script! There is a portion of the Rise of the Resistance experience written there! The player may be chosen to be part of the First Order. Or, they might be under attack by Kylo Ren! There is a different adventure under each flap. So, the game can change with every selection! 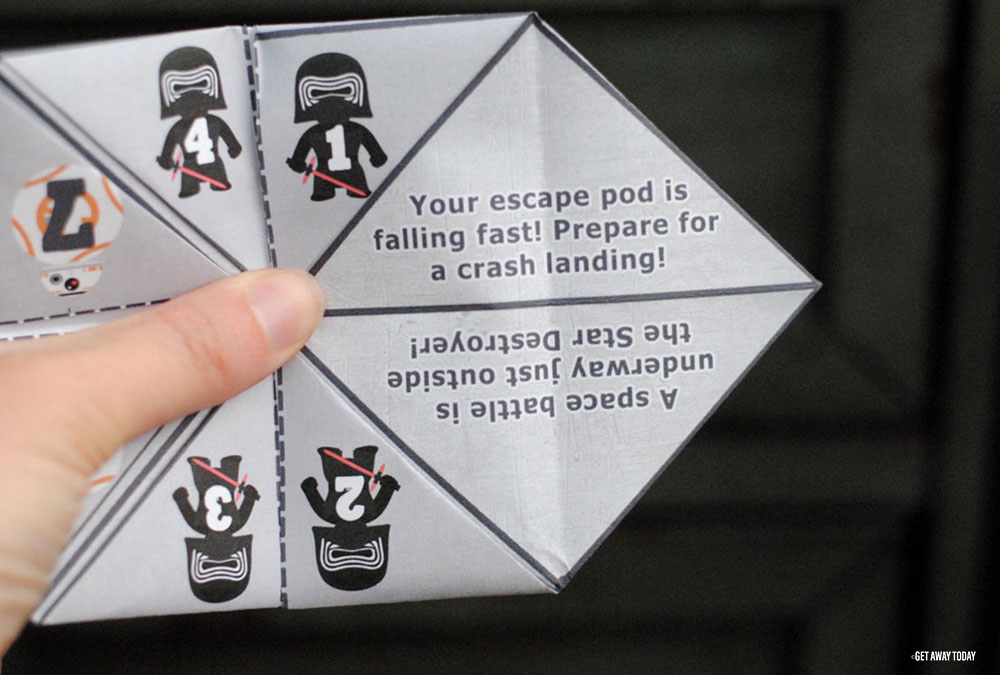 I hope you have fun with this Rise of the Resistance game. It's a fun way to get excited about a trip to Disneyland. Galaxy's Edge is an out of this world place to visit. Book your next Star Wars vacation online or call one of our agents at 855-GET-AWAY. 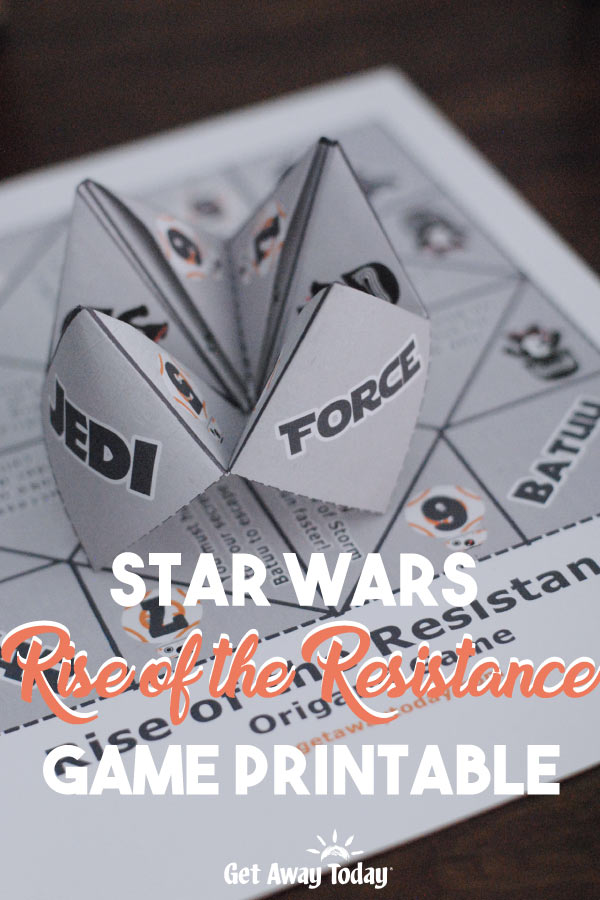