UPDATED December 6, 2021: As of December 8, 2021, Disney's MaxPass and FastPass service have been replaced by Disney Genie and Disney Genie+. To learn more about this new offering, check out our in-depth article by clicking HERE. 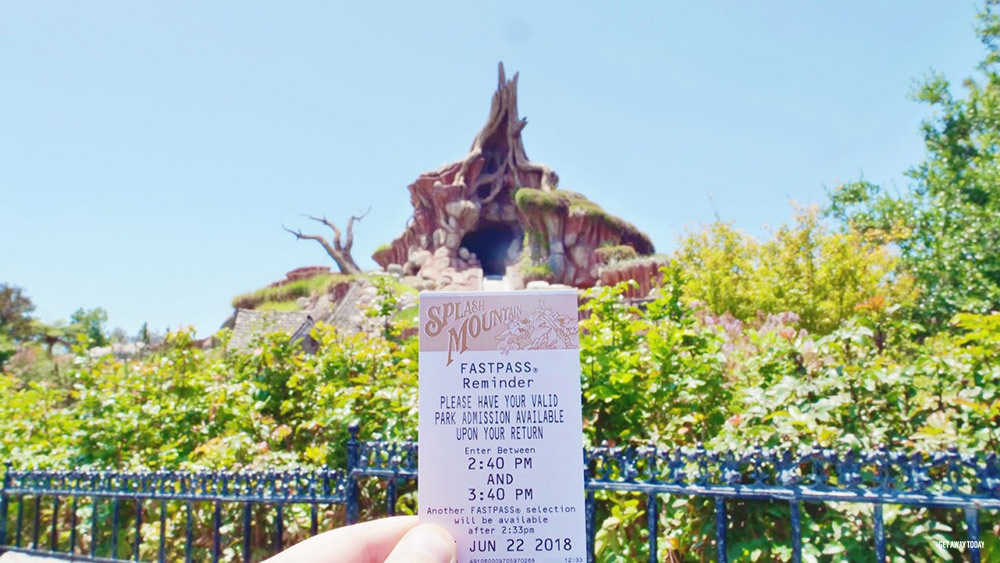 We love visiting Disneyland, especially when we’re the first to experience new things coming to the parks. We recently visited and got to try out one of the resort’s newest updates; Disneyland's digital FastPass system. The new feature, which replaces the current FastPass system, digitally connects FastPass tickets to your park ticket. While this is not the Disneyland MaxPass that Disneyland enthusiastically announced earlier this year, we are pretty sure it’s a stepping stone to that development.

Since we were one of the first to experience the change, we wanted to share everything we know about the update. We put together this video to show you exactly how it works. Check it out!

New: How to use Disneyland's Digital FastPass System

Click here for: How to Use the Disneyland App video

Additionally, we put together some of the FAQ to help explain even further how the new system works.

What is Disneyland’s digital FastPass system?

Paper FastPass tickets are a thing of the past with Disneyland’s new digital FastPass system. The newest change at the Disneyland Resort now digitally connects your FastPass to your park ticket. While you will be given a “FastPass reminder” printout, you won’t have to worry about carrying both the park ticket and FastPass ticket for everyone in your party anymore. It is very likely that the paper FastPass reminders will be temporary, and eventually everything will be digital.

All you will need to do is return to the FastPass line at the attraction or entertainment option within your return window. Once there, scan your park ticket and when the light turns green, you're good to go! Your FastPass has been redeemed and you are ready to speed your way to the front of the line. 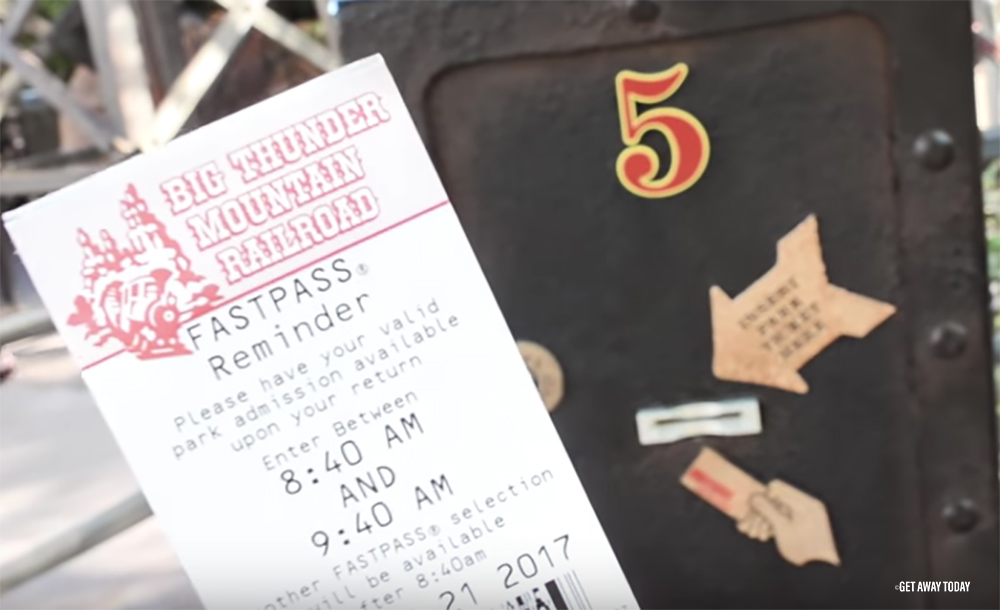 Do I have to pay extra for Disneyland's Digital FastPass System?

No, Disneyland's Digital FastPass System is free and included with your park ticket.

Does my 2-year-old need a Digital FastPass?

What rides include the FastPass option? 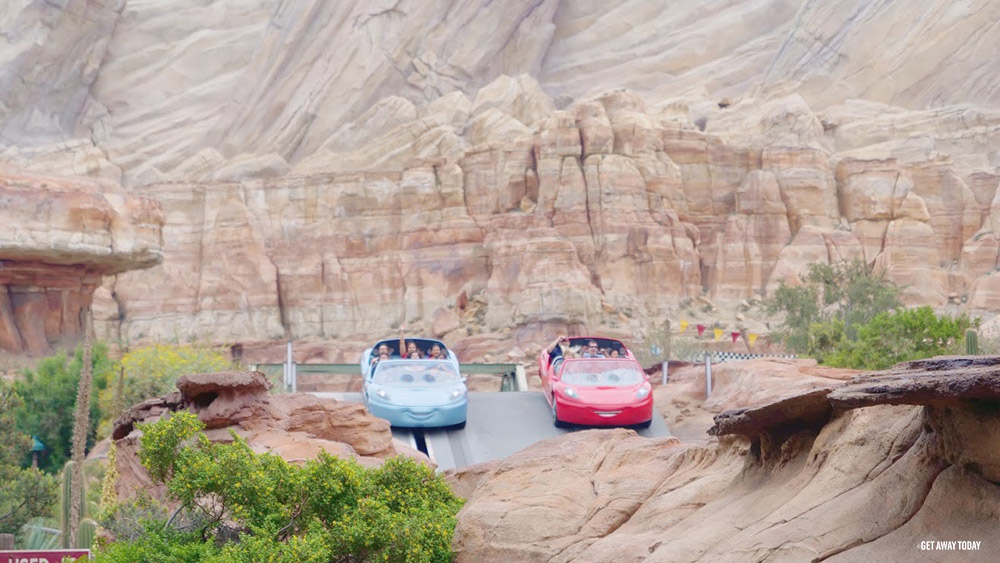 Can you schedule your FastPasses before you arrive?

The digital FastPasses cannot be scheduled on the Disneyland app or online, either before or during your park visit. All FastPasses will be acquired the same way as before; at the FastPass kiosk with your ticket in hand.

Is it the Disneyland MaxPass?

No, Disneyland’s digital FastPass system is different and completely separate from the MaxPass. The normal FastPass tickets will no longer be printed, but instead digitally connected to your park ticket. You will not be able to schedule the FastPass tickets on your phone or have to pay extra for the digital system. When you upgrade to Disney's MaxPass it will allow you to make your Digital FastPass reservations by using the Disneyland app on your smartphone for an additional charge. For more information on the Disneyland MaxPass, read our Everything You Need to Know about the Disneyland MaxPass article.

Do I have to have a device to use Disneyland's Digital FastPass System?

No. Because Disneyland's Digital FastPass System is tied to your ticket, it is completely separate from the Disneyland app. If you do have a device, we highly recommend downloading the app, which you can learn more about here: How to Use the Disneyland App

Can someone else use my Digital FastPass?

Yes and no. Because the Fastpass is digitally connected to your ticket, you would have to give someone your park ticket in order for them to use your FastPass. Because of this, you will only want to "share" your FastPass with someone you trust with your park ticket, i.e. someone in your immediate party. You will not be able to "collect" FastPass tickets and give them out.

Can we still send a runner to collect our Digital FastPasses?

Yes! Collecting Disneyland's Digital FastPass tickets will work the same way it always has. One person in your party can run ahead and collect all of the FastPass tickets for your family. All park tickets must be presented when you board the attraction. 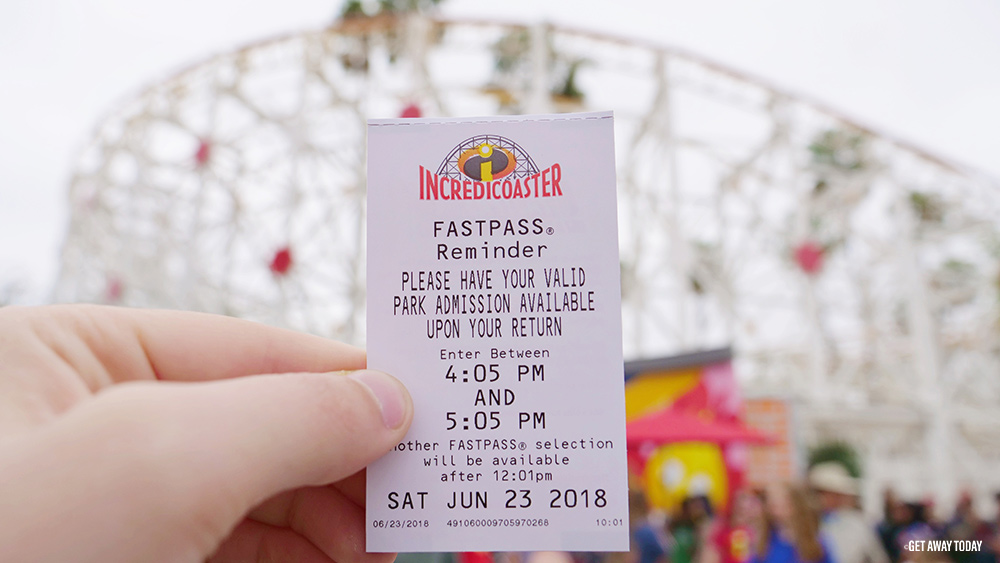 When do I have to use my Digital FastPass?

When will my next Digital FastPass be available?

What happens if I am unable to use my Digital FastPass because the attraction breaks down?

If you are unable to use your FastPass because the ride has broken down, you will receive a "readmission FastPass." Your ticket will automatically have another FastPass added to it for use at almost any other ride. If you are in Disneyland, the only two attractions your readmission FastPass cannot be used for are Space Mountain and Peter Pan. In Disney California Adventure, only Guardians of the Galaxy - Mission: BREAKOUT! and Radiator Springs Racers do not allow readmission FastPasses to be used.

Is it similar to Walt Disney World’s FastPass+ system?

Will entertainment FastPass tickets be digital as well?

No, all entertainment FastPass tickets will remain paper tickets. Currently, you can get a FastPass for the World of Color show in Disney California Adventure and Fantasmic! in Disneyland. It is likely that entertainment FastPasses will remain paper indefinitely since they do not have the machines or time to scan each guest for performances. As usual, you are able to hold a paper FastPass ticket for a show and still use Disneyland's Digital FastPass System for attractions. 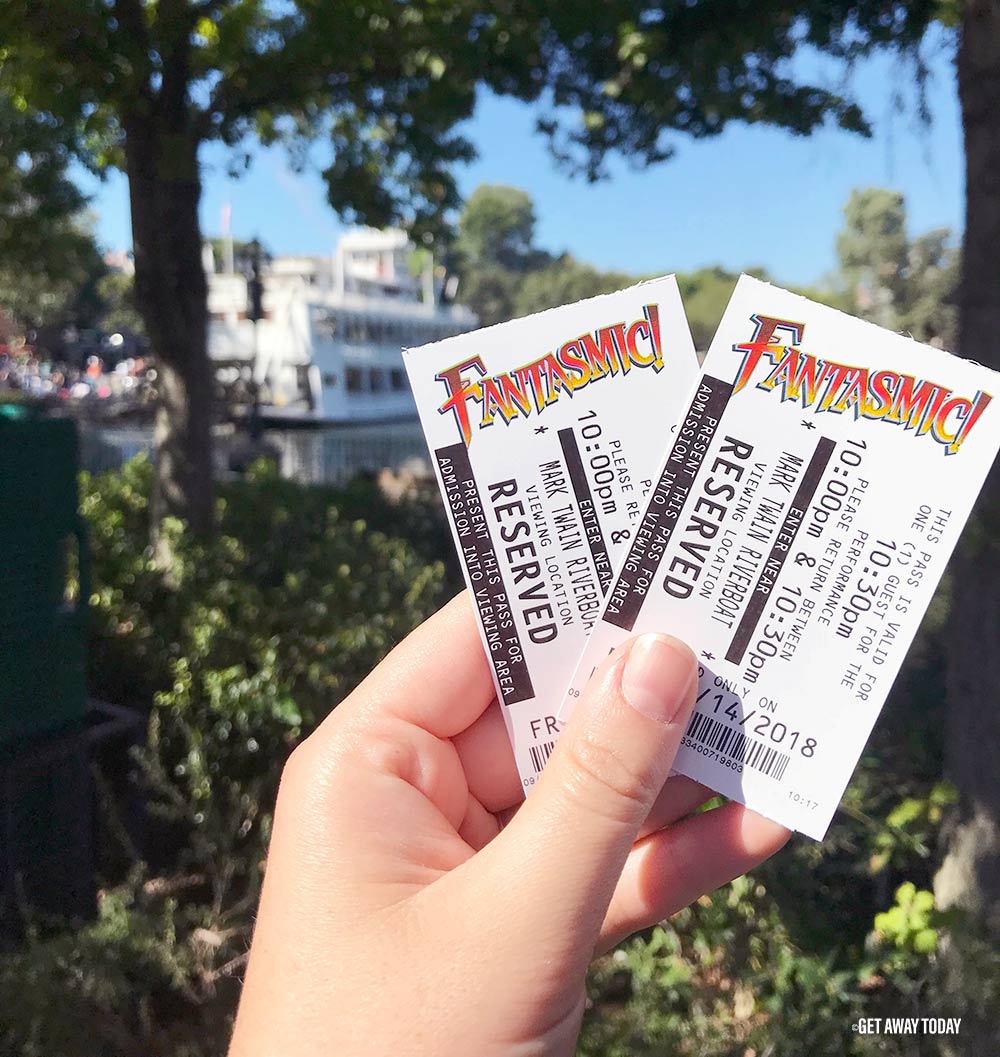 Disneyland's Digital FastPass system is just one of the many new things that have appeared in the parks over the years. We love the system! Please let us know if you have any other questions about Disneyland's Digital FastPass system in the comments. We'll make sure to update the article with the common questions and any updates as the summer continues.

To try the FastPass system for yourself, book your Disneyland vacation now. No matter when you visit, make sure to take advantage of huge savings with our discount Disneyland tickets and reduced rates for hotel. Book your Disneyland package online or by giving our agents a call at 855-GET-AWAY. 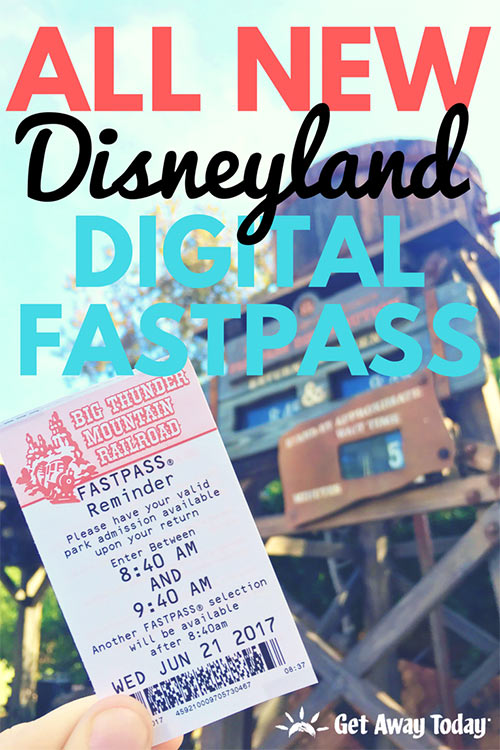 Anonymous- Every ticket has the potential for FastPass access. You still have to actively request FastPass for eligible rides/attractions. If you choose not to request FastPass, then you wait in the regular, standby line. There is a different line for those who have obtained FastPass. Hope this makes sense!

So if every ticket has a fast pass attached to it, isn't it just like standing in a regular line?? I don't see the benefit.

Good question! Depending on your priorities for your visit, it's hard to determine which is better. If you're set on riding as much as possible and crowds are pretty heavy, MaxPass is very convenient since it's all electronic from your mobile device. Also, if you're interested in getting a lot of photos from PhotoPass photographers, MaxPass includes that option at no additional cost. If crowds are lighter and you have more time to spread out your ride experiences, FastPass may be your best choice. It does not include PhotoPass downloads. When it comes to use, FastPass System will allow you to collect your next FastPass reservation either two hours from when you collect your current FastPass, OR after the first return time listed on your FastPass Reminder card, whichever comes first. If the ride still has more FastPass requests available after you've experienced it once, you are welcome to request another for a return time to ride. Hope this helps!

Which is better a MaxPass or Fastpass? Also can you use the fastpass on each rides or is it like only 1 fastpass for a ride and that's it? And is it the same for MaxPass?

You can get both FastPass tickets for World of Color (currently closed) and Fantasmic! near the shows. You'll see the kiosks on the map, or can ask any Cast Member exactly where to find the FastPass distribution areas. You'll want to get a FastPass early in the morning as they do run out.

How Do you get a fast pass for Fantasmic??

How do you get a fast pass for World of Color??

Hi Blake, Great question! You can absolutely add Max Pass to your tickets once you get to the park. We recommend downloading the official Disney app and adding your credit card so that you can add it as soon as you enter the gate.

I just booked a 2 day Disney and 1 day universal package and I'm wondering if we can add the max pass to our Disney tickets or if it's too late?

Hi Dia! It depends on how many FastPasses are left for that specific time when your group arrives at the kiosk. It's likely everyone will have the same time and, if not, one or two of the members is usually only different by about five minutes. Please let us know if you have any other questions!

I'm a complete newbie, so my question is, if you are going as a group, will everyone's fast pass time be different? How does that work?

We were there Wednesday, Thursday and Friday. The fast pass return lines were kinda long. 30 minute wait for Splash mountain with a fast pass. We went to Haunted Mansion to use our fast passes and the cast member told us to go in the standby line bc it was faster, same thing happened on Thunder Mountain. I think fast pass return lines are longer bc of the new system, I hope.

We have been here since the first day of the new system. While you can still use a runner, most attractions require that you scan your ticket at the gate, then again halfway through the line. This means that your runner can't pick up fast passes while you're on the ride. Also, I am traveling with a toddler and older kids. It makes me nervous to hand over my older kids' park tickets to them while I'm on toddler duty! Everything else has been smooth. A cast member was even able to extend our fast pass time window when we were a bit late due to a parade.

This is a fantastic addition to Disneyland and I am looking forward to using it soon.

Hi Carol, FastPass is available for the new Guardians ride. We must have missed that in our list within the article - we've updated it to show that. Thanks for catching that for us! :)

How will the digital work with the stroller swaps?

Thank you so much!!

Is the Fast pass NOT available for the new Guardians ride? Your photo shows it but the article does not support the photo. I'm going in a week and would like to be sure. Thank you!

Hello there :) i just booked a 3 day Hooper for Disney and one day universal studios tickets, how long will it take to get my confirmation email and know how to track on FedEx?? Thanks!!

Thanks for the update! We will be there on Wednesday! We love getawaytoday!