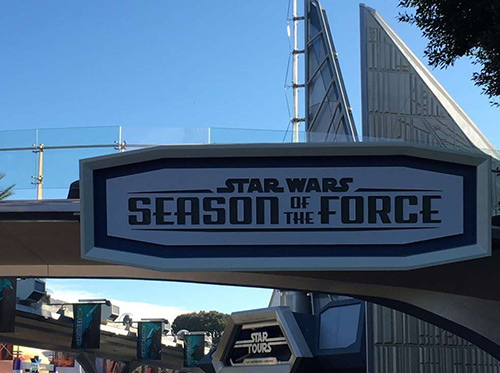 1. Visit Jakku in a newly added scene to Star Tours - The Adventures Continue. Your tour in a StarSpeeder 3000 requires some hefty flight skills to avoid First Order Tie fighters. Finn, one of the main characters from Episode VII, The Force Awakens, appears on the side screen and asks why Star Tours would be on Jakku. He encourages the pilot to follow the Millennium Falcon to outrun any First Order entanglements.  A chase ensues and the tour ends up landing in a junked Star Destroyer.  The landing feels unstable and the Star Speeder is titled heavily to one side, added a bit of realism and some fun.   Scavengers appear to see how extensive the damage is and to see who might get the used parts first when BB-8 shows up in 3D transmission to convey the importance of the mission containing the rebel spy before the scene transitions. Remember, there are over 50 combinations, so the chance of having the same experience twice is slim.
2. Path of the Jedi:  Replacing Captain EO, Path of the Jedi is a short combination of clips that combines all aspects of the all current Star Wars movies. All major characters make an appearance as Luke Skywalker’s journey to discover the secrets of the Force and encourage a new generation to discover the Force. The short film revolves around Obi Wan Kenobi’s teaching moment with Luke:  “The Force is what gives a Jedi his power. It’s an energy field created by all living things. It surrounds us, and penetrates us. It binds the galaxy together.”  Star Wars fans will love the new addition! It's also a great way to introduce those not familiar to the saga to Star Wars so they can more fully appreciate Season of the Force. 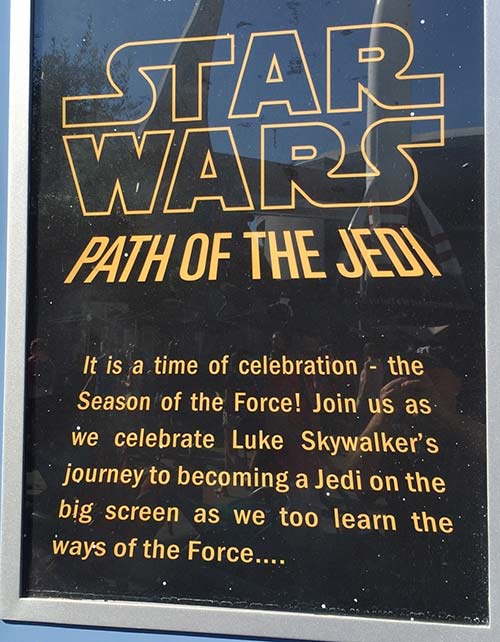 3. Hyperspace Mountain:  Space Mountain has been temporarily transformed to include a Star Wars theme, complete with the Star Wars score and images of TIE fighters, Star Destroyers, and other references. When Hyperspace Mountain was first announced, there were some naysayers thinking it wouldn't be that great. However, when it opened, it has been the surprise star of Season of the Force. Similar to the Ghost Galaxy addition, this temporary addition is a great way to enjoy the classic attraction! Fastpasses for Hyperspace Mountain go quickly, so you'll want to grab one first thing in the morning.
4. Star Wars Launch Bay:  Housed in the former Innovations building, Star Wars launch bay features models, costumes, videos, and other areas that are thrilling for a Star Wars fan.  You can meet the galaxy’s best bounty hunter - Bobba Fett, the First Order Commander himself - Kylo Renn, or an old friend -  Chewbacca! 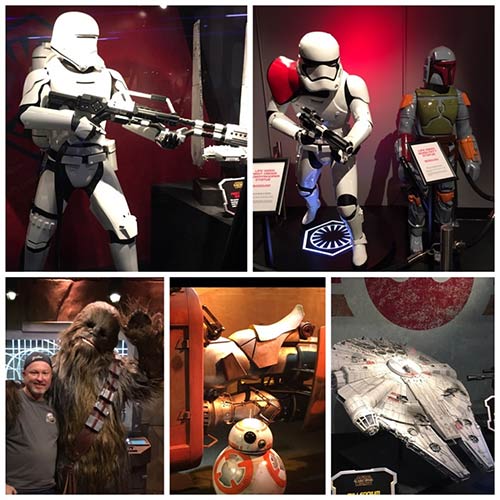 5. Jedi Training:  Trials of the Temple:  Your young padawans have a chance to learn the powers of the Force against the dark side. A sign up is required and is located on the Autopia side of the former Innoventions / Carousel of Progress building. Signups are very limited each day to children ages four to 12, so make sure that you sign up first thing in the morning. The earlier the arrival the better chance of getting on the list to participate. Your child will be assigned a specific time to meet with the Jedi Masters for a short training and then class Star Wars villains make an appearance for a great experience and a great photo op including: Darth Vader, the Seventh Sister (popular in the Star Wars Rebels, animated series), and Darth Maul. After the trials, your padawan will receive a pin indicating that they completed the training. 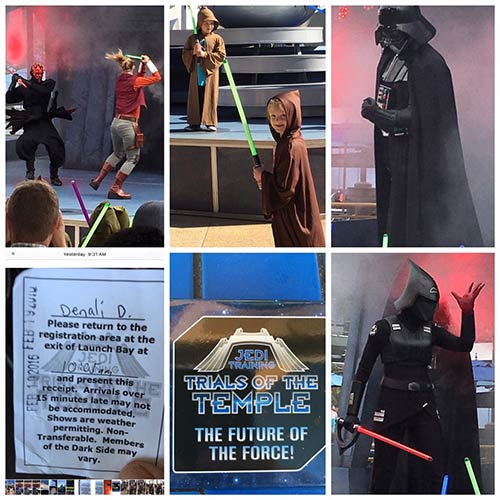 6. Tomorrowland Additions:  All of Tomorrowland has been taken over by Star Wars. Complete with a Star Wars sound track, food, merchandise, and the appearance of Stormtroopers to ensure that you are having a safe time adds to the excitement! The details are amazing including merchandise that features an opportunity to have your name printed in Aurebesh, the alphabet used to transcribe the language in the outer territories. 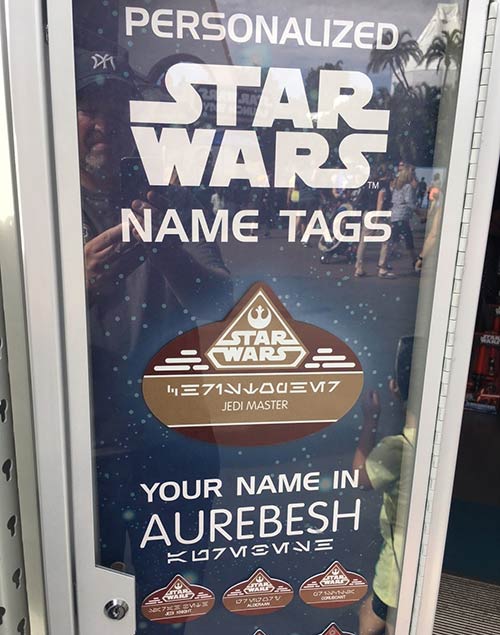 And for Star Wars fans everywhere, the best is yet to come:  Star Wars Land
The new Star Wars land Disneyland was announced by Disney’s Chief Executive, Bob Iger, at the D23 convention held last August.  The land is currently under construction and according to the lead of Disney’s Park and Resorts division, “will introduce you to a Star Wars planet you’ve never seen before - a gateway planet located on the outer rim, full of places and characters familiar and not so familiar.”  Construction has started in the area between Big Thunder Mountain and Fantasyland. 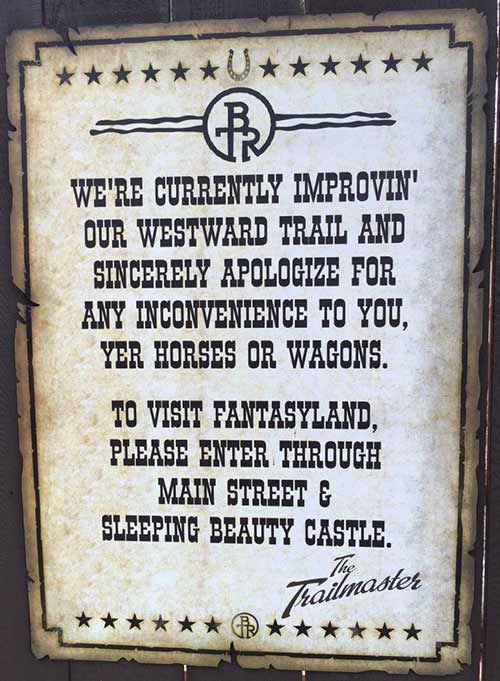 Small bits of news have slowly been announced about what we can expect of this massive and immersive land. Iger explained, (The) “intent is to make it feel as if you just walked into one of our movies ... Bringing Star Wars to life in the physical world gives us the opportunity to play with a whole bunch of things we've never done before.” There will be at least two new attractions; one will allow guests to pilot the Millennium Falcon, the very space ship that did the Kestle Run in 12 parcets. It has been said you actually get to pilot this iconic ship in a way that has never been seen before. The other attraction will allow guests to know what it feels like to be in the middle of a battle between the Rebellion and the First Order. Along with these state of the art attractions, guests can enjoy a cantina, street market, dinner club and much much more! Stayed tuned to Packed with Fun for all the updates on any exciting new announcements to Star Wars Land. 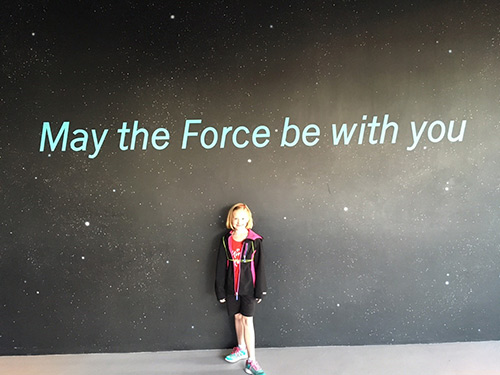 Create amazing tales and adventures with your family at the Happiest Place on Earth! Get Away Today would love to help with everything from discount park tickets to the most affordable hotel accommodations to insider information about your favorite attractions. Book your Disneyland package online or call our travel experts at 855-GET-AWAY.

Chris Dallin is a Disneyland fanatic. He travels to Disney parks several times a year and continues to find hidden gems, adventure, joy, and magic in the Happiest Place on Earth. Tune into future blogs for additional ways to experience the Disneyland Resort. 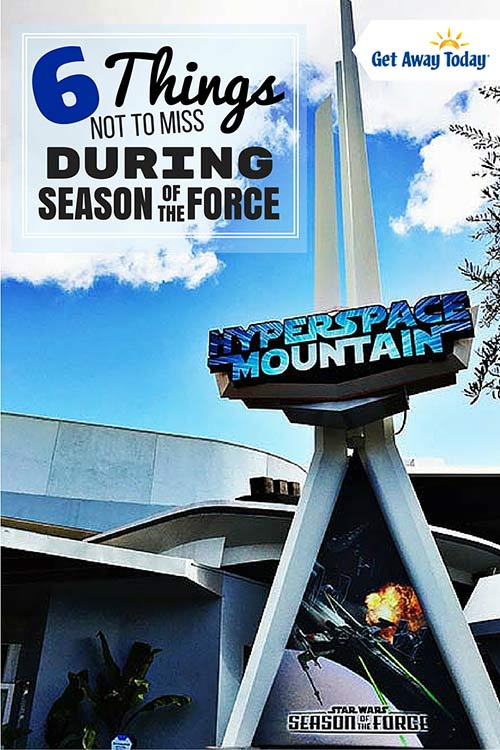