UPDATED MARCH 2019 Star Wars Land Disneyland opens May 31, 2019, but that doesn't mean you have to wait to get in on some Star Wars action at the Resort. We are sharing four Star Wars things at Disneyland right now. Watch our video to get an idea of all of the galactic fun awaiting your family. 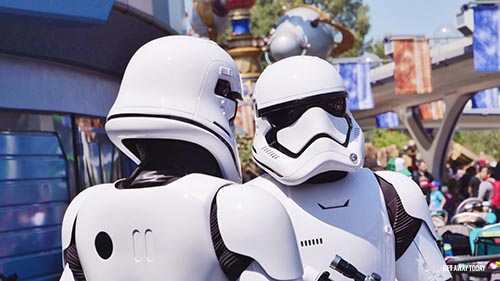 If you're a Star Wars fan, you likely are aware that Star Wars Land Disneyland opened May 31, 2019. Here's a look at some of the other places in the Resort where you can enjoy all things Star Wars.

As a quick recap, here is a review of currently available Star Wars things at Disneyland:

When it comes to Star Wars things at Disneyland, this is one of the most authentic. You can find this interactive Star Wars exhibit featuring scenes and characters from Star Wars: The Last Jedi in Tomorrowland inside Disneyland. You'll see real-life props from the movie as well as replicas created specifically for Star Wars Launch Bay. It's like a Star Wars museum!

But it's also more than that. This one location features multiple Star Wars things at Disneyland right now. You can come face to face with characters like Darth Vader, Kylo Ren or Chewbacca. And, you can watch the exclusive documentary on the creative team behind Star Wars. A true Star Wars fan will want to spend an hour or two soaking up the awesomeness found at Star Wars Launch Bay.

Another one of our favorite Star Wars things at Disneyland right now is found in Tomorrowland. Star Tours - The Adventures Continue is a 3-D attraction that takes you on a journey with your co-pilots C-3PO and R2-D2.  It's been at Disneyland for over 30 years, but it is not the same attraction that debuted in 1987.

You'll board the Starspeeder 1000 for an out of this world space voyage through your favorite iconic locations from the Star Wars films. You may even find yourself face to face with Kylo Ren, Poe Dameron, BB-8 or other characters from the newest installments of the franchise.

But the true highlight of Star Tours - The Adventures Continue is the final scene that is currently being shown. If you go to Disneyland right now, you can get a sneak peak at the impending Star Wars: Galaxy's Edge planet! Now when you land in Star Tours, you are landing on Batuu - the planet on which Galaxy's Edge will reside.

Jedi Training: Trials of the Temple:

For small kids, one of the best Star Wars things at Disneyland right now is the Jedi Training show. Here young padawans can join the force and train to defeat the Dark Side. Kids ages 4-12 can take the stage to face Kylo Ren or Darth Vader and defeat the most evil villains in the galaxy.

If you want your kids to participate, you'll have to have them register to be a part of the show at the kiosk located outside the exit to Star Wars Launch Bay. Your child must be with you when you register and all spots are offered on a first-come, first-serve basis. Because this show is so popular, we recommend getting there as early as possible. 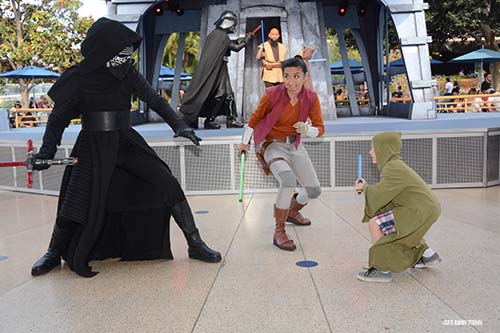 The Void at Downtown Disney

The most immersive of the Star Wars things at Disneyland right now is actually right outside of Disneyland in Downtown Disney. The Void at Downtown Disney offers an incredible virtual reality experience called Star Wars: Secrets of the Empire. You'll virtually turn into an undercover rebel disguised as a Storm Trooper. Your mission is to recover Imperial intelligence and it is intense! It is a must-do for a Star Wars fanatic.

While you don't need a park ticket to access The Void, it is a separate ticketed event. You'll need a reservation and ticket for the experience, which takes about 30 minutes and costs around $35 per person. You can find available reservation times here: The Void at Downtown Disney.

When you're ready to experience all of the Star Wars things at Disneyland when Galaxy's Edge opens May 31, 2019, give us a call at 855-GET-AWAY. Or, check out our Disneyland packages online. We can't wait to help you with an out-of-this-world vacation! 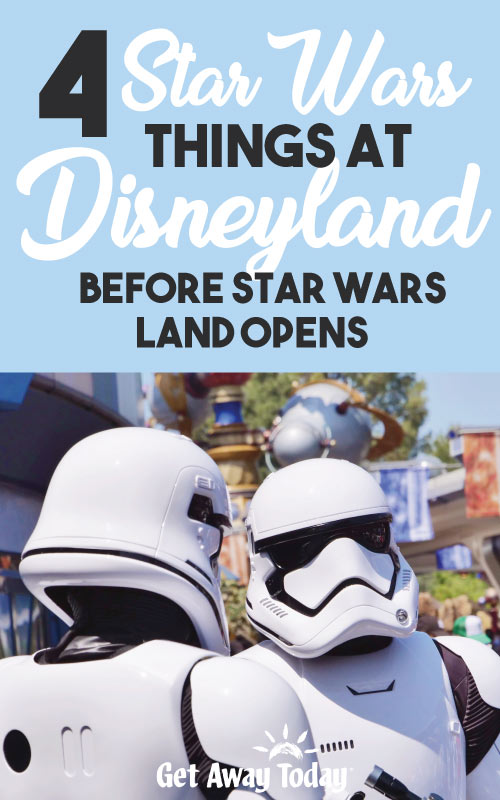