Recently, my family took a trip to Disneyland it was the first time in about 10 years we went to Disneyland as a family. The reason we waited so long to go again was because 10 years ago my littlest brother was diagnosed with autism. Autism is a developmental disorder that affects the brain's normal development of social and communication skills. With the disorder, life changed and family vacations became very difficult to take. For years my parents would debate on where to take our family on vacation and stay away from a lot of people. We vacationed to Mexico, Hawaii, Oregon Coast, Lake Powell and other locations because we knew we would be able remove him from situations that made him uncomfortable, but this year was a little different. My dad and brother in-law participated in the 70.3 Ironman in Oceanside and we had the perfect opportunity to go to Disneyland since we were only 45 minutes away from the park.

The one way I can describe our experience was AMAZING! He loved it! One of our main concerns was how he would act with big crowds. Even though there were a lot of people at Disneyland and it was kind of hard to get around, he did great. Usually when he is uncomfortable he makes a lot of noises and tries to run away from the situation, but this time he stayed close to me and my parents. Disney and their cast members were just amazing. It was fun to see a cast member who was checking to see if you were seat-belted in properly stop and give him a high-five or give him extra help getting on and off the rides. My parents (the ones who tried to avoid the parks) were so overwhelmed with gratitude for the service Disney and their cast members presented to our family and we are already wanting to go back and do it all again! 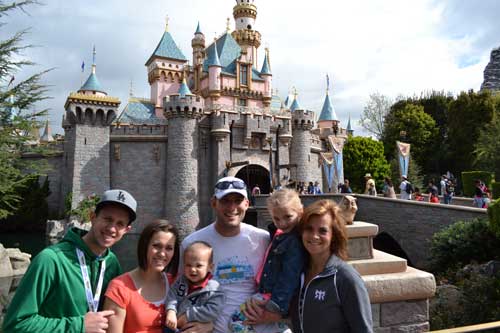 Some recommendations I have for families that have a child with a disability would be to go when it’s not very busy. Disneyland is open to everyone around the world, so try and miss all the major holidays and school breaks. Christmas, Halloween, Spring Break and summer break have high volumes of people. However, if those are the only times you can travel, it's not a deal breaker. No matter when you travel, you should be prepared with stuff your child likes, like my brother and his love for books. We took some of his favorite books to help him in times of need. But the biggest thing is to have a blast, know that you are in the happiest place on earth! Seeing my little brother's smile while riding Splash Mountain, hearing him laugh while dropping on The Tower of Terror, and seeing him hug his favorite character, Goofy and Goofy hugging him back was absolutely PRICELESS! If you are worried about taking your child with a disability to Disneyland, don’t worry; memories last a lifetime!

Thank you both for the responses, if you ever have any questions when booking your next vacation please feel free to give me a call! I just recently talked to my parents and they are planning on taking my little brother again for his birthday next February! These memories are priceless and last a lifetime :)

I would agree. We have gone to Disneyland many times as a family (We went there often growing up and have continued going as I started my own family). Recently my mom was diagnosed with ALS. Her mobility has suffered because of it. I was worried how this last trip was going to go. But we had a great time and made some wonderful memories. The staff was great and always willing to answer questions as to how to handle a specific experience or ride. I tried to help my children see that even though this trip maybe a little bit harder, it was worth it for the memories they would make with their grandma.

I just want to say that your story brought tears to my eyes. I book through Getawaytoday.com every year for our family vacation to Disneyland and just like you, we have an autistic child in the family, my son. He has some issues with crowds and having to be patient etc but when we go to Disneyland, he is at his best. He cant stand anything with big drops or that goes really fast so we take him on rides like Astro Blasters and Toy Story Mania. It warms my heart when I hear stories like yours and Im glad your brother had a blast!!!