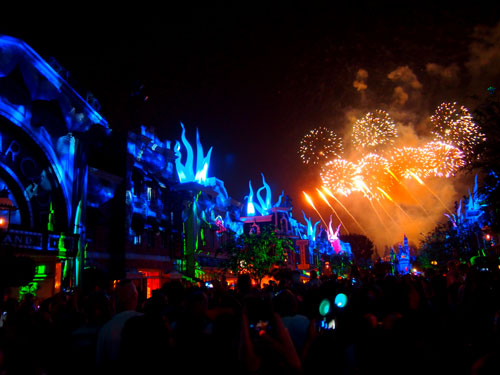 During the year leading up to Declaration of Independence, the authors of the Declaration, John Adams, Thomas Jefferson and Benjamin Franklin, envisioned fireworks as part of the celebration of our nation’s independence. The very first Independence Day fireworks celebrated the first anniversary of the birth of a nation on July 4, 1777 in Philadelphia, PA. The Pennsylvania Evening Post wrote, “The evening was closed with the ring of bells, and at night there was a grand exhibition of fireworks....the city was beautifully illuminated. Everything was conducted with the greatest order and decorum, and the face of joy and gladness was universal.”

There is certainly something magical and patriotic about experiencing an inspiring fireworks show. Walt Disney wanted guests of Disneyland to experience the same excitement, magic and fun that Americans experience every Fourth of July, just as the Pennsylvania Evening Post described it nearly 238 years ago. As such, Disneyland premiered its first fireworks show a year after opening, in 1956. Back then, the fireworks were lit by cast members touching fuses with a flame.

Walt Disney built Disneyland to allow park guests to immerse themselves in a story. The magic of the park is that you get to choose your own adventure: including, a submarine adventure, sledding on the Matterhorn, boating through the wilds of Africa, exploring space, the Frontiers of America ,etc.. The fireworks show incorporates all of the adventures of Disneyland and is a full-fledged emotional tour of the Happiest Place on Earth, using the palate of inspiring fireworks, light, and Disney magic to tell the story. Americans celebrate special events with fireworks and parades. Inasmuch as every day is special at Disneyland, you’ll find, well, fireworks and parades!

Every Sunday night, families would huddle around the TV set to watch the Disney Sunday movie, “Walt Disney’s Wonderful World of Color” Tinker Bell would appear and welcome watchers to the show. (I love how Disney pays homage to the past; it’s interesting how the current evening show at California Adventure is named for this great show, World of Color!) 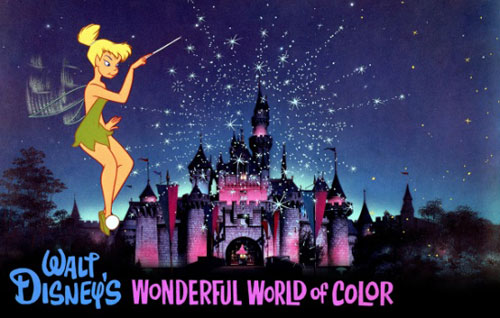 Walt wanted to bring his TV show to life at Disneyland, so, in 1959, the same year that the Matterhorn appeared in Disneyland, the park installed a cable between the castle and the 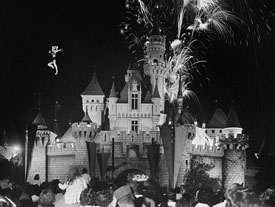 venerable mountain so that Tinkerbell could appear during the fireworks and welcome guests to the show. Walt had hired a famous circus performer, Tiny Klein, to “fly across the sky” at a Disney sponsored event in Los Angeles earlier that year, and soon, she was flying through the air to welcome guests to the park’s nightly fireworks show. Tiny was 70 years old at the time and flew across the sky until 1964. She started a legacy that continues with Tinkerbell welcoming guests today! Tinkerbell makes a special appearance at the new Disneyland Forever fireworks during the 60th Anniversary celebration. 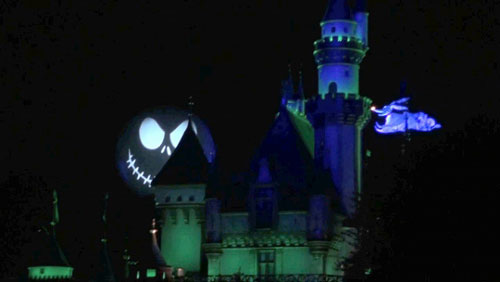 In addition, Nemo “swims across the sky” this year as part of Disneyland Forever, and during Halloween Screams, the fireworks exclusive to Mickey's Halloween Party, one can see Zero the Ghost Dog from the Nightmare Before Christmas flying the same route.

Now, Disney Parks is the largest consumer of fireworks in the world and have created a new air launch technology enabling fireworks to be launched electronically and synchronized with a soundtrack. Throughout the years, the park has featured:

Most years, the park celebrates holidays and special events with special fireworks presentations including:

The fireworks have always been an immersive experience. As the years go on, the show gets better and better. Additional components have been added to enhance the experience. Lasers, lights, animations and other additions continue to allow the experts at Disneyland to tell a wonderful story. Make sure and look close, there are special Disney shapes included in the fireworks, including the hidden Mickeys, smiley faces and hearts! 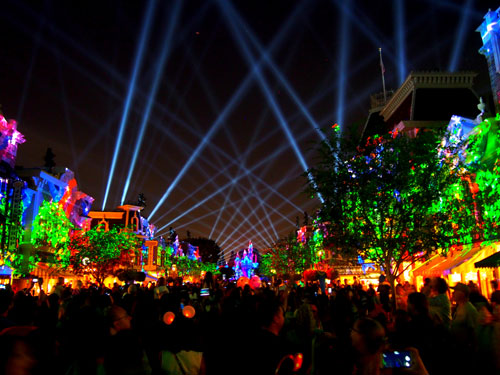 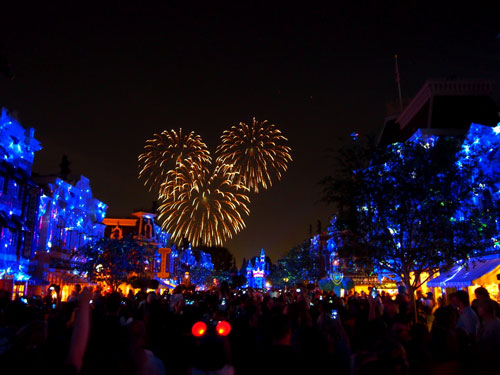 • The original: The Made with Magic Ear Hat – formerly known as Glow with the Show
• The Minnie Mouse Head Band
• The Mickey Mouse Glove
• The Sorcerer Mickey Wand

Some of the best viewing areas for the Disneyland Forever fireworks include areas on Main Street, USA, the area near the Matterhorn, and It’s a Small World.. Or, ask your Get Away Today expert for hotel options that give you great views of the fireworks, just know you won't be getting the full immersive experience.

The 60th Anniversary: Disneyland Forever Fireworks is a must see! Disneyland has added many new projections to the park including ride enhancements at Big Thunder Mountain, the Matterhorn, Haunted Mansion, Peter Pan, Alice in Wonderland, and other attractions. The fireworks show is no different! The entire artist pallet just expanded including Main Street, USA, Sleeping Beauty’s Castle, It’s a Small World, Rivers of America and the Matterhorn!

When the show starts you are inside Disneyland, but then you are transformed to be totally immersed in Disney memories. The show includes projections that make you feel as if you are part of the show including dancing chimney sweeps from Mary Poppins and a beehive as part of Winnie The Pooh’s adventure. You'll feel like you are soarin’ over London complete with Peter Pan and Tinkerbell, and prancing over the African Savannah with the Lion King and the Jungle Book. The buildings freeze over when Elsa freezes all of the attractions. Bubbles and seaweed move in the water with the Little Mermaid, and the Matterhorn doubles as Mount Wannahockaloggie from Finding Nemo! It is incredible. 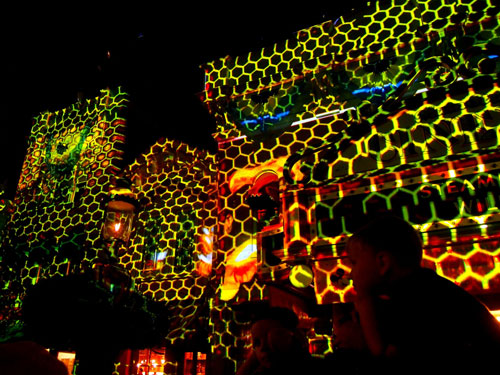 Photo Courtesy of Stephanie Curtis: Guests of Disneyland are immersed in Winnie the Pooh's beehive as part of the Disneyland Forever Fireworks show.

But, if you are a true Disney fan, you will find excitement, nostalgia and a tear in your eye as you listen to one of Walt Disney’s song writer’s, original songs written by Richard Sherman. The same writer that brought you the soundtrack for Mary Poppins, the Tiki Room, It’s a Small World, and a Great Big Beautiful Tomorrow, featured in the Carousel of Progress! - closes Disneyland Forever with “A Kiss Good Night.” This original song from Sherman is a wonderful way to remember the great memories of Disneyland while looking forward to a great big beautiful tomorrow on your next trip to Disneyland as you create memories with your loved ones.

Get Away Today would love to help you create memories at the Disneyland Resort and we know that Disneyland Forever will be among those memories that you'll cherish, well, forever. You can find all of Get Away Today's Disneyland packages online or by calling 855-GET-AWAY. 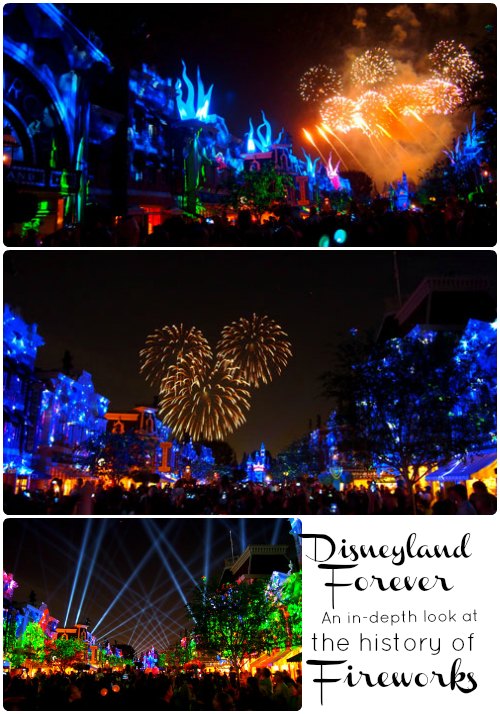 How do they project on the buildings like that? I have to see it!