This free printable Pixar Would You Rather game is a fun way to get your family talking. There are 30 unique questions based on Pixar movie characters and story lines for you to answer and discuss as a group. It’s the perfect boredom buster whether you’re flying, driving or waiting in line! It's also a great way to create a little bit of Disney-Pixar magic at home when you can't be in the parks. 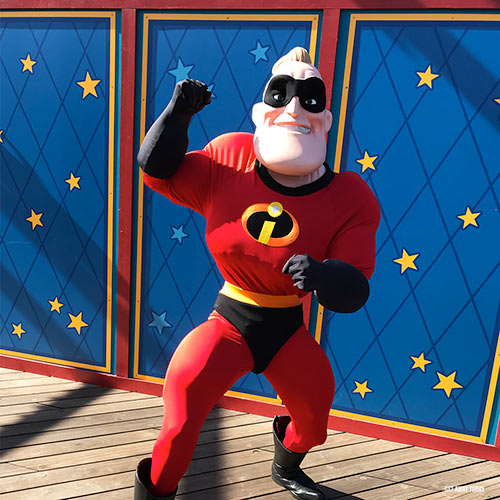 Pixar Would You Rather Game & Pixar at Disneyland

It's no question that Pixar has influenced the entire Disneyland Resort. You'll find Pixar stories in Disney California Adventure Park, Disneyland Park and throughout the shops in the Downtown Disney District. It's pretty incredible to stop and think about how many Pixar movies there are and how they have become such a huge part of the Disney story. That's what makes our Pixar Would You Rather Game so much fun! 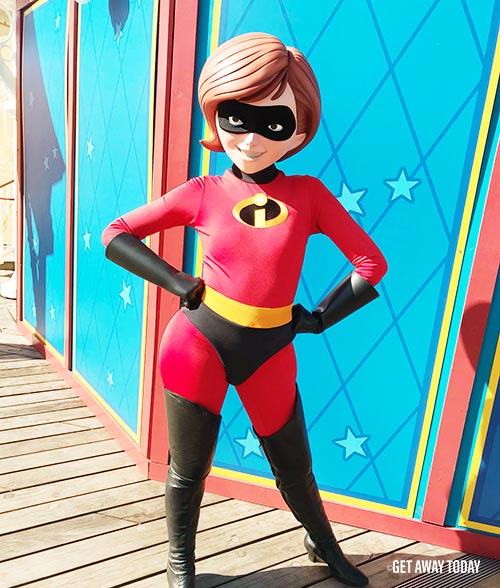 Since opening in summer of 2018, it's hard to imagine Disney California Adventure Park without Pixar Pier. This entire land is dedicated to all of your favorite Pixar stories and characters. There are attractions, some of the yummiest snacks, characters and so many photo spots. We've compiled our 5 must do things at Pixar Pier, so if you're headed there, be sure to check it out.

In addition to two land dedicated to Pixar, you'll also find a number of Pixar inspired attractions in Hollywood Land. Monsters Inc. Mike and Sulley to the Rescue is a dark ride in the area, and Turtle Talk with Crush is an interactive show found in the Animation Building. Occassionally, you can even find Pixar inspired celebrations. For example, during Halloween Time, you'll find a Dia de los Muertos celebration featuring Coco. It's so much fun!

Disneyland Park also loves and celebrates Pixar. In Tomorrowland, you'll find Buzz Lightyear Astroblasters, which is also the only attraction in the entire Disneyland Resort that features a free photo that you can email yourself. Occasionally, the Tomorrowland Theater will also feature extended previews of Pixar films for park guests. Most recently, the Tomorrowland Theater showed an extended preview of the new Pixar film, Onward, starring Chris Pratt and Tom Holland.

Not many people know you can also find some Pixar characters in one of Disneyland Park's oldest and most classic attractions, "it's a small world." When you're sailing down the river, look for Woody and Jessie in the old American scene.

The all-new Magic Happens parade that debuted in late February 2020 also features some of the most magical moments in Coco. Seasonal celebrations will also frequently bring Pixar inspired food and merchandise items to Disneyland Park.

Pixar Would You Rather Game Instructions

To kick off the Pixar theme, I designed a Pixar Would You Rather game to play with your family. I love Would You Rather questions. They always spark such fun conversation. It also gives you a glimpse into each person's personality! You'll be surprised what you can learn about your kids through a few silly questions. 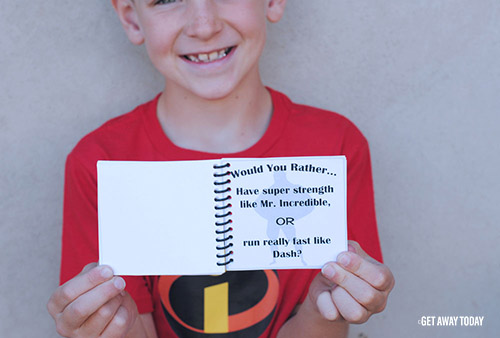 Pixar Would You Rather Printable Sheets:

To play, download the free Pixar Would You Rather Game templates above. There are five sheets total. If you need printer paper, stock up on Amazon HERE. 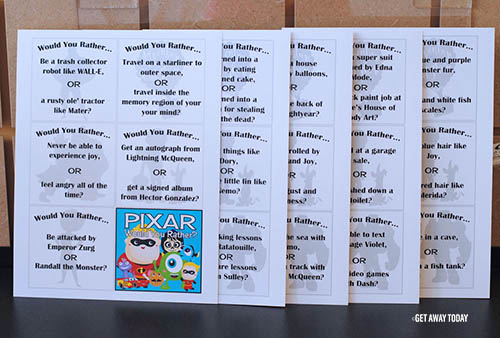 One of the pages has the game cover on it. You will want to be sure to print that page in color. 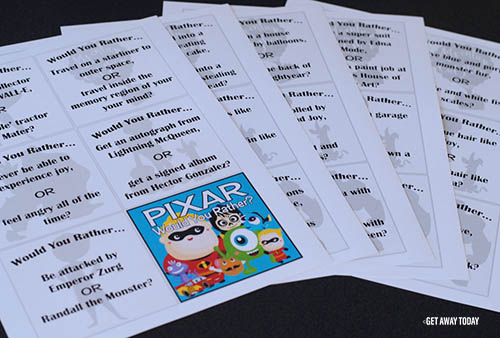 Cut around the question boxes so you have individual squares. I made sure to design the templates so make cutting fast and easy! You are very welcome. 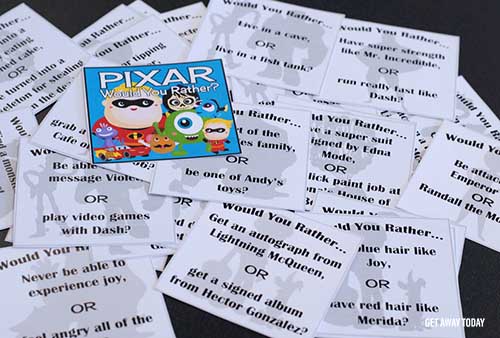 Pile the Would You Rather Pixar questions into one stack. Make sure that each card has the question facing the correct direction. You do not want them upside down or backwards. 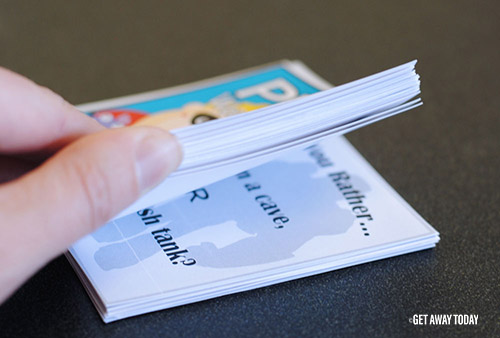 I made mine into a little spiral bound book. You can do this at the UPS Store or at any local print shop. The whole thing cost less than $5 to print and have bound. So, it's totally budget friendly. If you're rather hole punch each one, purchase an hole punch from Amazon HERE, and slip each question on a book ring from HERE. 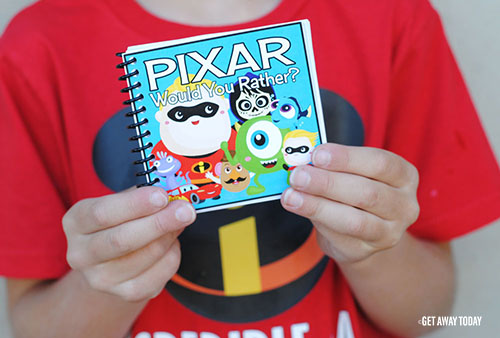 To play, simply read the questions that are posed on each card. Each question is posed as a "this or that" scenario. For example, "Would you rather win the Piston Cup, or win the Monsters University Scare Games?" 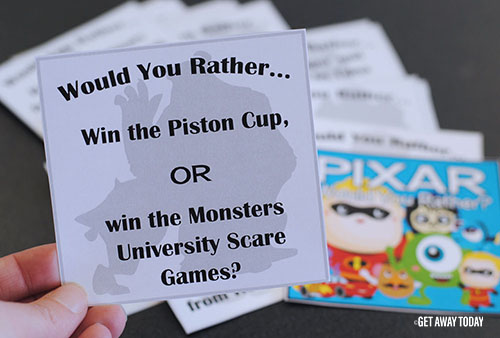 Or, "Would you rather find a monster in your closet, or see the ghost skeletons on the Day of the Dead? 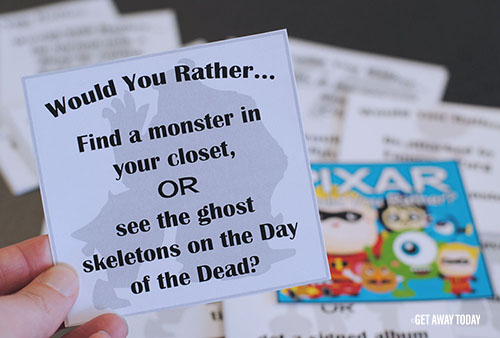 I like to read the questions out loud and let the whole group answer every time. It makes the game last longer and you also get to debate and persuade each other about what answer is the best! 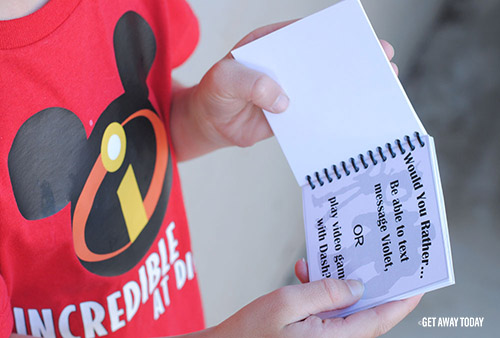 You can play your free Would You Rather Pixar Game while you are traveling to your Disney vacation, or use it while you are waiting in line for an attraction or gathering for the fireworks or a parade. It is small enough to tuck into your fanny pack or purse, so you can have it handy whenever your family needs a distraction or a little bit of Pixar entertainment.

To plan your Pixar-fueled vacation with the most affordable prices and best customer service, let Get Away Today help. Our Disney experts know all the tips and tricks to help you have the best Disneyland vacation yet. And our discount Disneyland tickets and reduced hotel rates will have you singing from rooftops about your savings. Book online now or give our agents a call at 855-GET-AWAY. 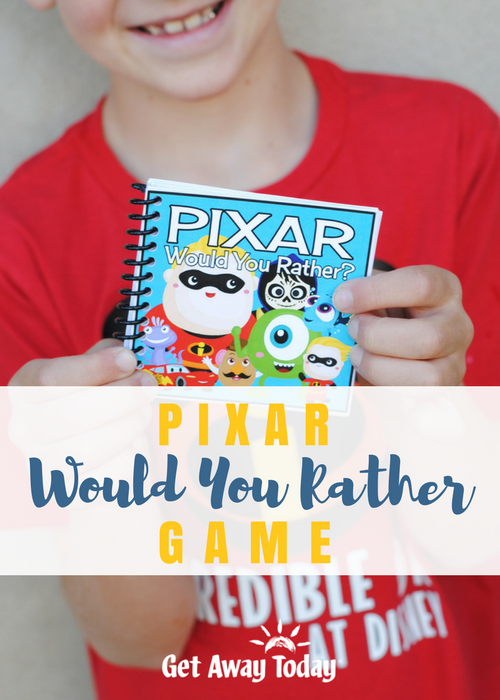