At Get Away Today we are true Disney experts, which is why we're always being invited to appear on TV shows, blogs and more. Yesterday we were asked to share all that's new at the Disneyland Resort with the readers on one of our favorite blogs, "Or So She Says." You can read the article in its entirety on the blog, or just keep reading here:

I can’t believe we’re already into 2013 – and what’s more, is I can’t believe I haven’t been to Disneyland this year yet! To be fair, I was just there in November…. But, even in the last few short months since I’ve been there, Disneyland has so much new to offer. Since Disneyland is without a doubt our most popular destination at Get Away Today, and one of my personal favorite vacation spots, I thought I’d share all that’s new at the Disneyland Resort this year.


If you've been to Disney California Adventure Park since last summer, you know that there were some MAJOR additions to the park. So even though it technically re-opened in 2012, I know a lot of people haven’t been able to make it there yet and it seems a shame to not mention such a huge addition. The new Cars Land offers three new attractions, three new dining options (the Cozy Cone Motel is one of the cutest quick-service restaurants I’ve ever seen), new shopping, and the scenery alone is spectacular. The new entrance to the park and Buena Vista Street makes it feel like a completely new park. Disney California Adventure Park also added a slew of new shows that take place throughout the day. After going this past November, the newly re-opened park has such great flow, is so much fun and feels so right, that it's truly difficult to picture it any differently than it is now! 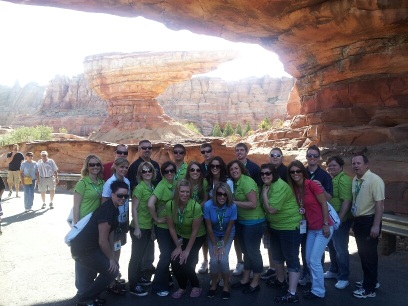 Our staff at Cars Land in November.

So much was added to Disney California Adventure Park last year that it almost seemed like the Disneyland Resort forgot about Disneyland – not so! Disneyland has three new super cool attractions for 2013.

First, Disneyland's newest attraction is the Fantasy Faire, an extension of Fantasyland that opened just about a month ago. This charming village located adjacent to Sleeping Beauty's Castle features the perfect place to interact with your favorite Disney Princesses. There’s also a Royal Theatre that rotates between two new shows. A Tangled themed show featuring Rapunzel plays twice in the morning and a Beauty and the Beast inspired show starring Belle plays twice each afternoon. These interactive shows are sure to be unlike any you've seen. I know when I go later this year, I will make it a point to catch both shows. 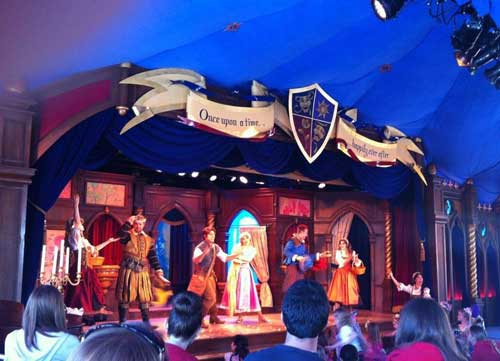 Second, Disneyland will also welcome its first Marvel character this year when Iron Man (my favorite!) comes to the Innovations Building with the Iron Man Tech Presented by Stark Industries interactive exhibit. Set pieces from Iron Man 3 and a virtual simulator will allow you see what it's like to use the newest Iron Man technology and armor. Iron Man Tech will open on April 13, 2013 and is expected to stay through the end of September this year, so if you’re an Iron Man fan, you may want to plan your visit accordingly.

And finally, the third exciting addition to Disneyland this year is Mickey and the Magical Map, a brand new show that will take place in the Fantasyland Theatre. This 20-25 minute musical will take you on a whimsical journey to new worlds featuring your favorite Disney Characters through beloved songs and incredible special effects. This show will debut in Disneyland on May 25, 2013 - just in time for Memorial Day Weekend. It is expected to be the same type of caliber as Aladdin (full Broadway musical production quality) which plays over at the Hyperion Theatre in Disney California Adventure Park. Also, just a side note, if you haven’t seen Aladdin, you are missing out. It is incredible.

To say that’s all that’s new this year at Disneyland isn’t really accurate though… This year Disney has been adding what they call Limited Time Magic, which could be celebrations, character experiences or other festivities that happen anywhere from one week to a month in the parks. The point of these experiences (besides just being extra fun), is to remind us to embrace the moments while they're here. So far all of the Limited Time Magic happenings seem to breeze into the park, then leave just as swiftly as they came. Past Limited Time Magic happenings have included a special screening of OZ the Great and Powerful, the New Orleans Bayou Bash and True Love Week which was celebrated over the week of Valentine's Day. Upcoming Limited Time Magic festivities include Independence Week, a possible Star Wars Week, Monstrous Summer, and Mother's Day and Father's Day celebrations. Information is generally kept to a minimum, which just adds to the element of surprise and delight when you find yourself in the middle of some Limited Time Magic! I can’t wait to see what magical something will be taking place during my upcoming visit.

If you’re thinking of visiting the Disneyland Resort this year, our Reservation Specialists at Get Away Today would love to help you plan the perfect vacation. Our staff is full of insider tips including the best places to stay, play, eat and more!