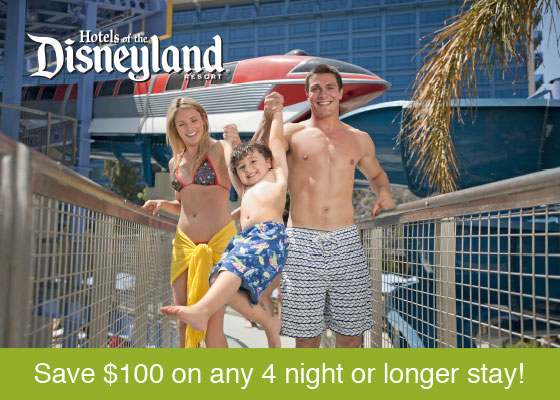 The Hotels of the Disneyland® Resort just got more magical with a limited time special offer! Save an extra $100 when you stay four nights or longer at Disney's Paradise Pier® Hotel, the Disneyland® Hotel or Disney's Grand Californian Hotel® & Spa through 2013 - just be sure to book by March 17, 2013!

When you stay at one of the Hotels of the Disneyland® Resort, you are surrounded by Disney magic during your entire stay, plus you have access to guest only amenities and perks.  One of the most popular offerings for guests at the three Hotels of the Disneyland® Resort is early access to a Disney Theme Park during each day of your stay - including exclusive early access to Cars Land inside Disney California Adventure® Park! (Active Disneyland® Resort theme park ticket is required.) Guests staying at Disney's Grand Californian Hotel & Spa also have access to an exclusive entrance into Disney California Adventure® Park through Disney's Grand Californian Hotel® & Spa, Disney Character Dining on-site, Key to the Magic and Package Express where your Resort purchases are delivered directly to your hotel, Disney Character Wake-up Calls, and more!

Availability for this special is limited, so be sure to book your stay at a Disneyland® Resort Hotel today!

Check out these other great blogs: