Check out today’s article to discover six secrets that will put the “Zip-a-Dee-Doh-Da” in your next trip to the Happiest Place on Earth. 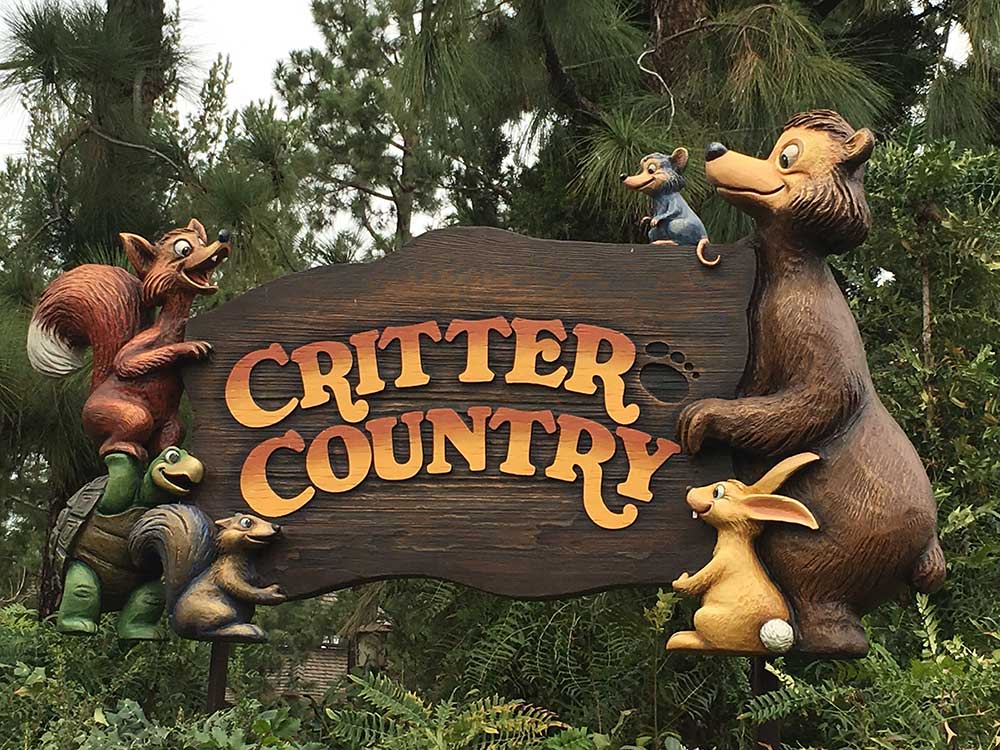 Although Critter Country has changed throughout the years, guests love this backwoods area of the Disneyland Resort where the pace is a little slower. Join us as we celebrate some of the details, specifics and history of Critter County in Disneyland Park.

Over the years, the area where Critter Country resides has changed many times. It has hosted several Disney attractions early on in park history, such as Indian Village as part of Frontierland. It was later changed to Bear County, USA, and most recently, Critter Country. The area features Splash Mountain, a log flume attraction; The Many Adventures of Winnie the Pooh, a dark ride featuring many of the characters from the 100-acre wood; Disneyland bakery/dessert outlet, the Hungry Bear Café, and a Winnie the Pooh and Friends character meet and greet area. 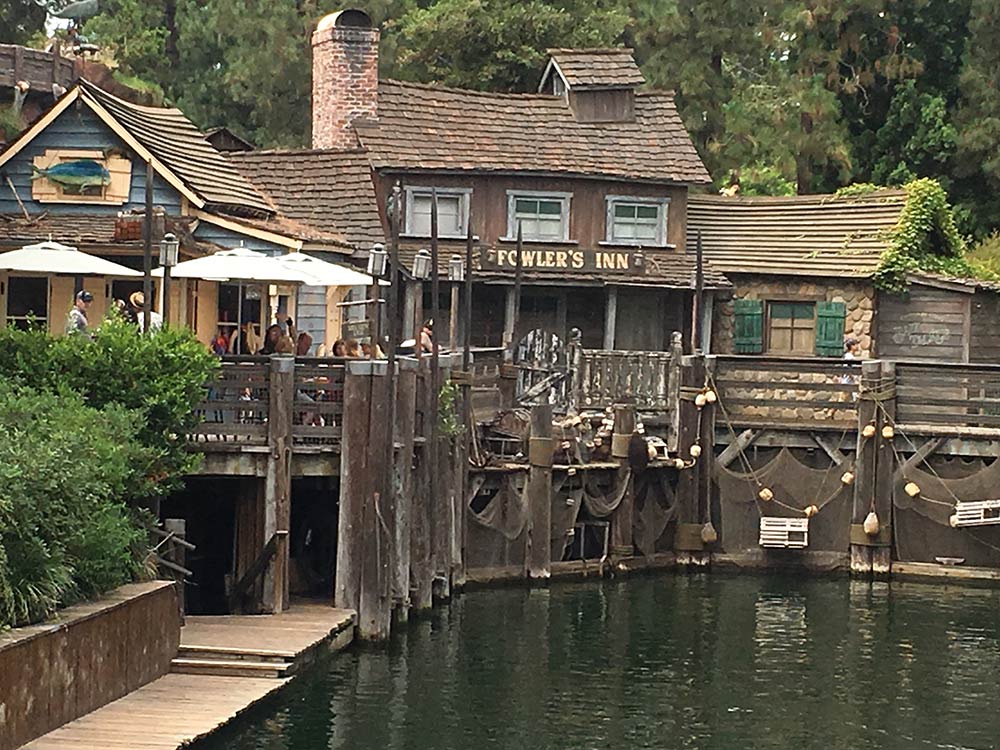 1. When Walt Disney was planning the construction of Disneyland, he searched for an expert from the Navy to help him build the Mark Twain River Boat. Admiral Joe Fowler had graduated from M.I.T. in Naval Architecture, and in 1952 was hired by President Harry Truman to increase efficiency in military spending. Soon after, “Admiral Fowler” constructed multi-family homes in Northern California. Walt hired him away to help build the Mark Twain Riverboat and then became part of the Disney team. Not only did Admiral Fowler help Walt build the Mark Twain River Boat, but Walt hired him to oversee the entire Disneyland construction project. Fowler was later named the first general manager of Disneyland. As if that was not enough, Admiral Fowler went on to help build the Magic Kingdom at Disney World and was a Disney cast member until 1978. Admiral Fowler was one of the major contributors to the success of Disneyland. Fowler’s Harbor is an homage to his legacy. Next time you are at Disneyland, take a walk on the hidden dock, walk behind Fowler’s Harbor Fish and Chips and watch park guests as they plunge into the briar patch from Splash Mountain’s thrilling log flume drop, Chickapin Hill. Fowler’s Harbor is also the home port for the Mark Twain River Boat and the Sailing Ship Columbia when they are not navigating the Rivers of America. 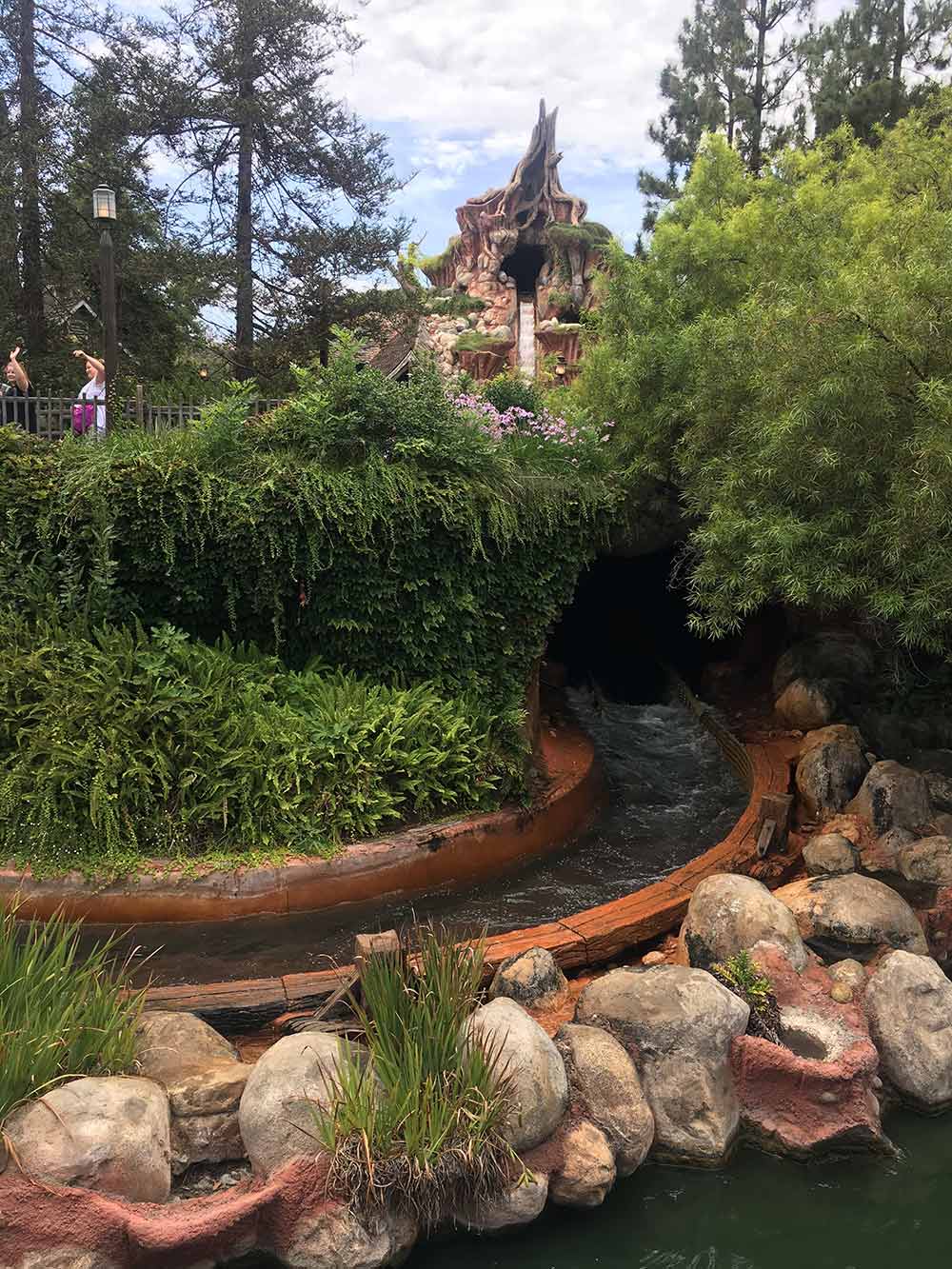 Disney expert advice: Fowler’s Harbor Fish and Chips offers an amazing Clam Chowder. A few hidden tables are located on the walkway, which is a great way to watch the Mark Twain River Boat paddle by away from any crowds in the area! 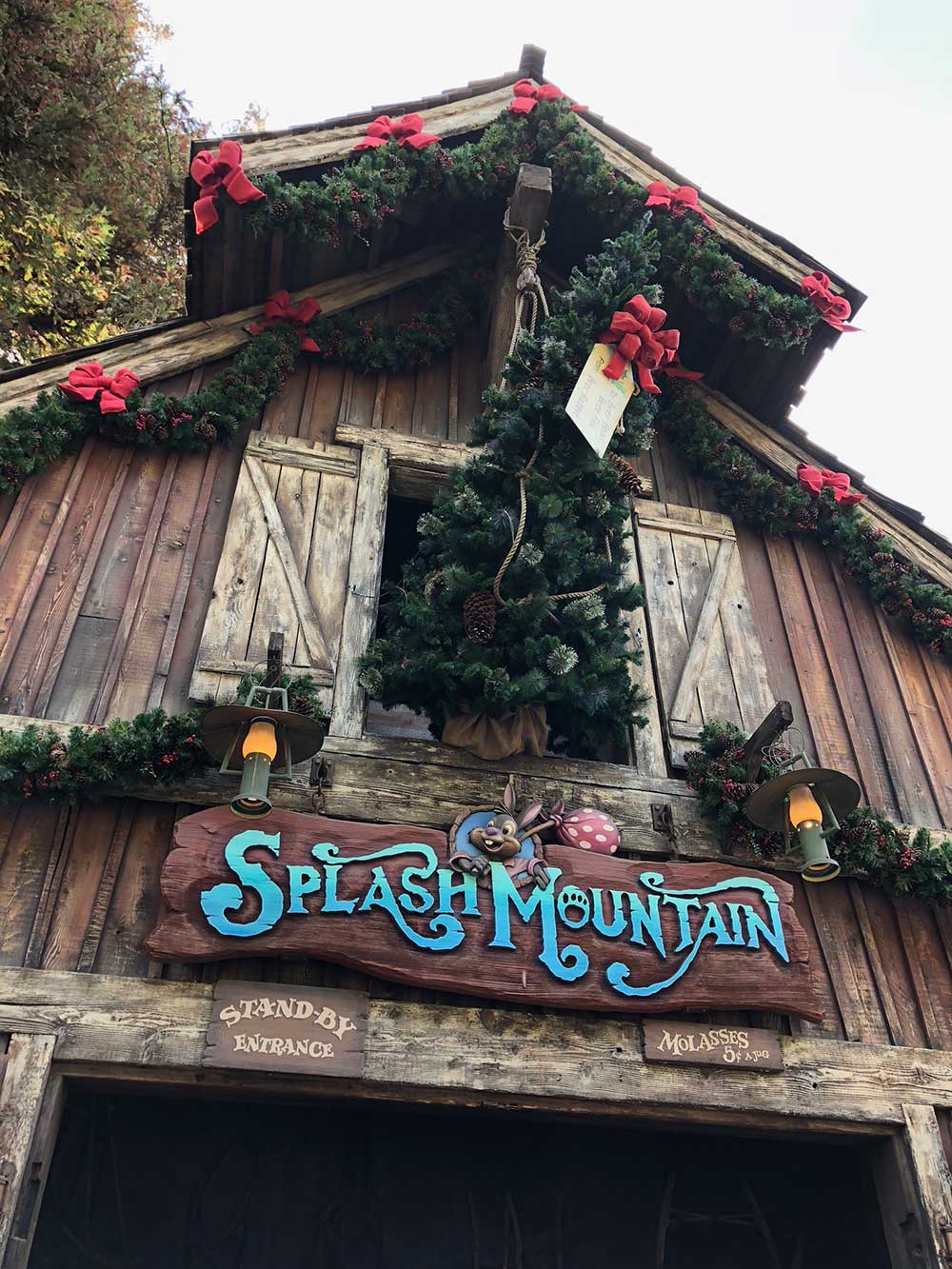 2. “Everybody’s got a laughing place – problem is; they just don’t take the time to find it!” Disneyland is certainly famous for its mountains! Big Thunder Mountain, Space Mountain, the Matterhorn, and Splash Mountain. Fun fact: Originally, Splash Mountain’s working title was “the Zip-A-Dee River Run.” After much debate, it was named Splash Mountain, and another mountain was added to the mountain range at Disneyland. Can you think of other mountains that have been added since? There’s the Cadillac Range at Cars Land, Grizzly Peak from the Grizzly River Run area and the hills of ToonTown. Soon, the peaks of Star Wars will be unveiled from a galaxy far, far, away, too!

Tony Baxter designed Splash Mountain and created a fun and exciting adventure. At the time, America Sings was a fun program that told the history of America. Many of the characters from the attraction made their way to Splash Mountain at the finale, where the characters are celebrating the fun on the river boat. It is a great way to celebrate some of the history of Disneyland! 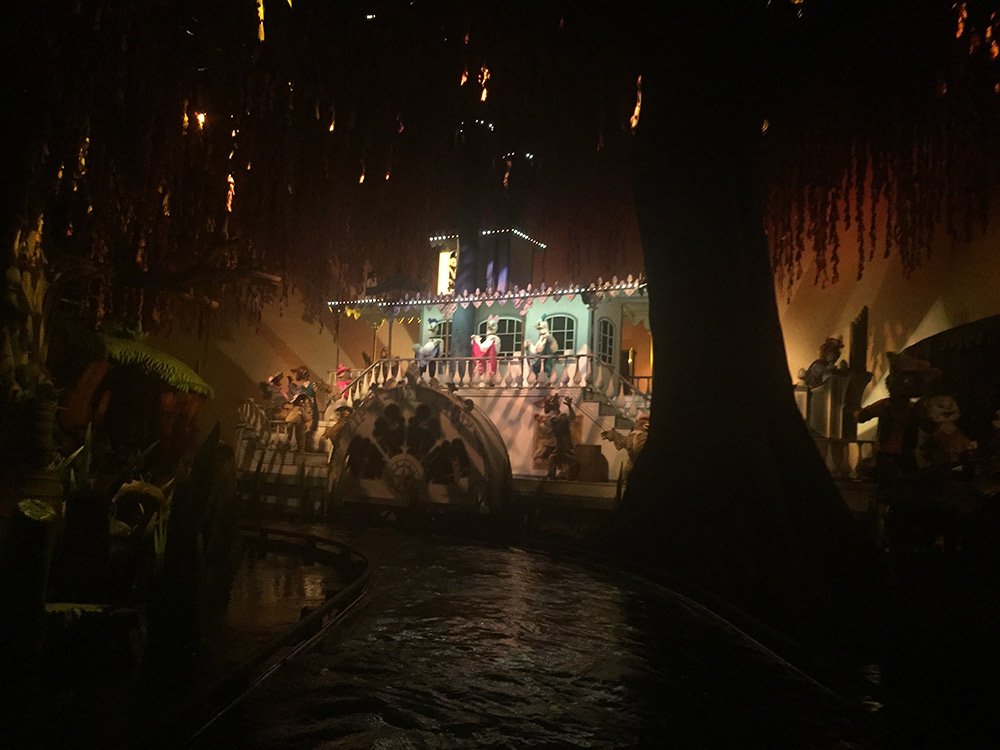 Splash Mountain continues to thrill adventurers. The attraction is a re-telling of stories from Uncle Remus. Look out for Brer Bear and Brer Fox; they sure want to make your day miserable! Just follow Brer Rabbit’s example and head into the briar patch to get away. The moral of the Brer Rabbit story is about choosing to look on the bright side. The walls of the queue line for this attraction are filled with fun quotes that remind us to choose to be happy despite our circumstance. Messages like: “It was one of those Zippie-Doh-Da Days, the kind of day where you can’t open your mouth without a song jumpin’ right out.”

Everyone loves to catch a thrill when they zoom down Chickapin Hill on Splash Mountain. Be sure to smile big, it is one of the most popular attraction pictures in the world. There are websites dedicated to the silly poses that guests make on the attraction- everything from reading newspapers, shaving, playing games and even a marriage proposal. 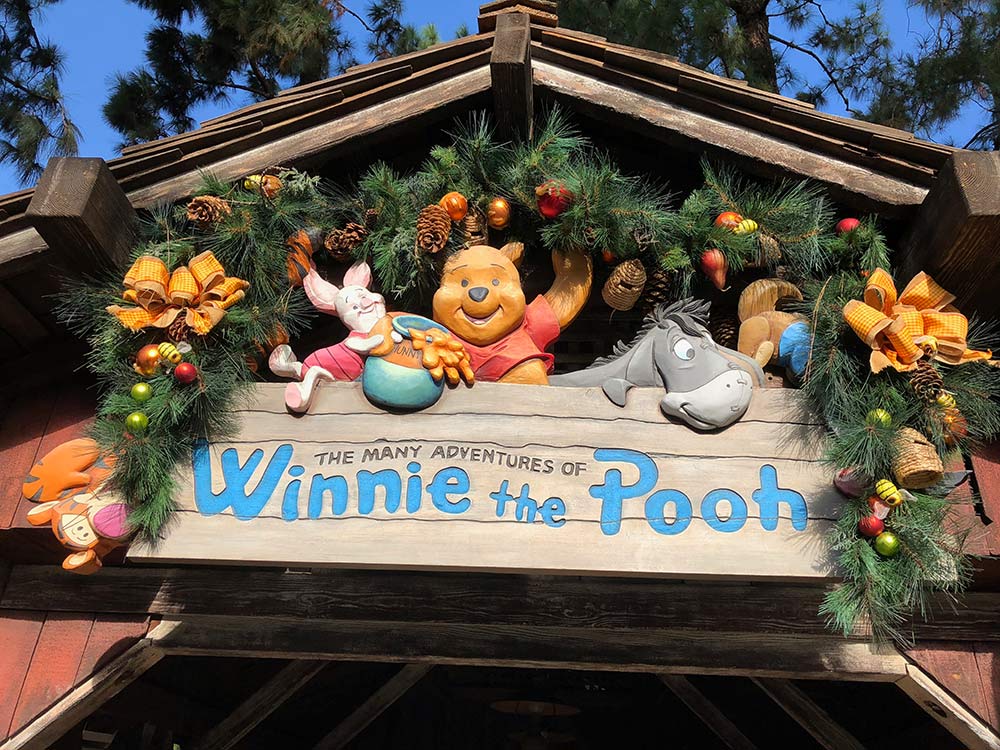 3. In the late 1990s and early 2000s Disney Imagineers wanted to introduce Winnie the Pooh into the Disney Park family and started to explore places to add the attraction. As soon as Disney fans found out about the switch, there was concern all around. There was talk of retiring Mr. Toad’s Wild Ride or the Country Bear Jamboree. The Disney Imagineers heard fan concerns and compromised; Mr. Toad’s Wild Ride retired at Disney World and the Country Bear Jamboree went on permanent vacation from Disneyland. At least both attractions could still be enjoyed and they kept the original edition of both attractions.

Disney Imagineers try to leave reminders of attractions from the past. There are homages to both retired attractions at both parks. At Disneyworld look for a head stone featuring Mr. Toad at the Haunted Mansion attraction.

At Disneyland, the original hosts of the Country Bear Jamboree can still be found in the Many Adventures of Winnie the Pooh!

Disneyland expert advice: When riding the Many Adventures of Winnie the Pooh, be sure to sit in the first two rows of the beehive. When the beehive crosses from the area featuring Heffalumps and Woozles, look behind and above you. There, staring right back, are Max, Buff and Melvin, the original hosts of the Country Bear Jamboree. So many guests have no idea that they are hiding there! It is so fun to surprise your family and friends – look for them next time you ride Winnie the Pooh. 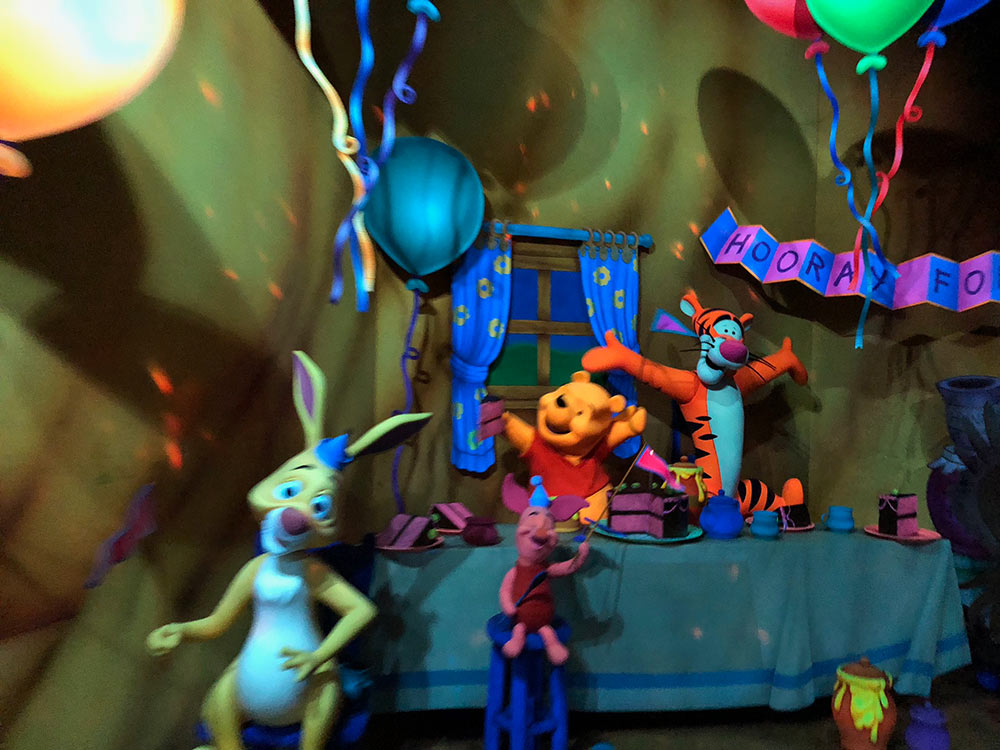 Keep looking throughout Critter Country, as there are several references to the old Country Bear Jamboree attraction, including the restrooms at the Hungry Bear Restaurant, where they are named after characters from the original show. From time to time, the characters show up at special Disney events. Big Al and Gomer have been seen at some of the 24 hour celebrations at Disneyland! 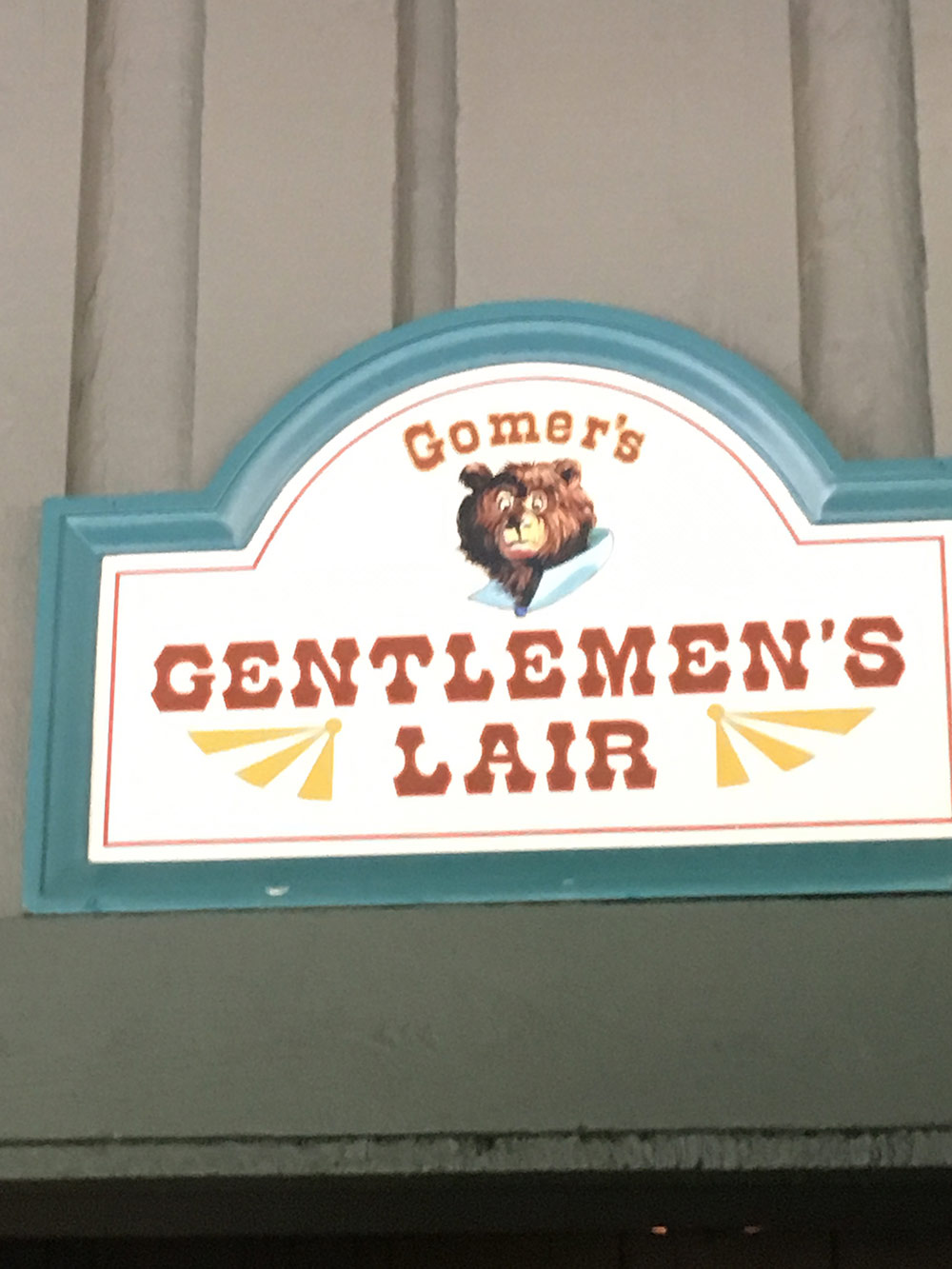 Disneyland expert info: During the holiday season in 1986, Disneyland’s Country Bear Jamboree changed to the Country Bear Vacation Hoedown. The bears went on a beach vacation, and one of the bears had an octopus girlfriend. Today, she can be found in the Collector’s Fortress as part of the Guardian’s of the Galaxy attraction. Look for her in the queuing area after the introduction on the far side near the original Yeti from the Matterhorn!

4. Got a rumbly in your tumbly? Near the exit to the Many Adventures of Winnie the Pooh, a Disneyland bakery outlet features wonderful creations from the culinary experts at Disneyland. Including caramel apples, rice krispie treats and other culinary delights. Pooh Corner is the only place in the park to get a Tigger Tail! If you like marshmallows, caramel, and chocolate — this is the treat for you. 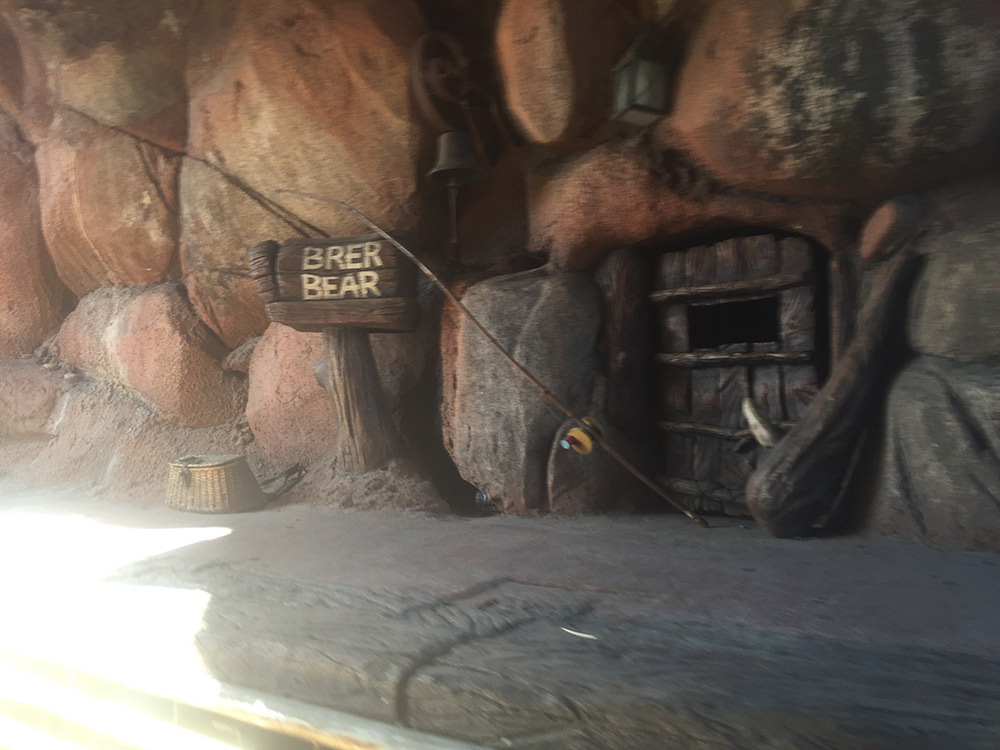 5. When guests originally entered Bear County, USA, a hibernating bear named Rufus could be heard in a cave nearby. Rufus moved to “Brer Bear’s” cave in the Song of the South attraction. Another homage to a past attraction at Disneyland.

6. The Hungry Bear Restaurant is a great place to grab a quick service meal. Disneyland offers healthy choices and high quality meals for those in your group. It is a place to catch a quick rest and watch the boats cruise by on the Rivers of America. From the Davy Crockett canoes to the Mark Twain River Boat and the Sailing Ship Columbia, it is a fun way to relax. 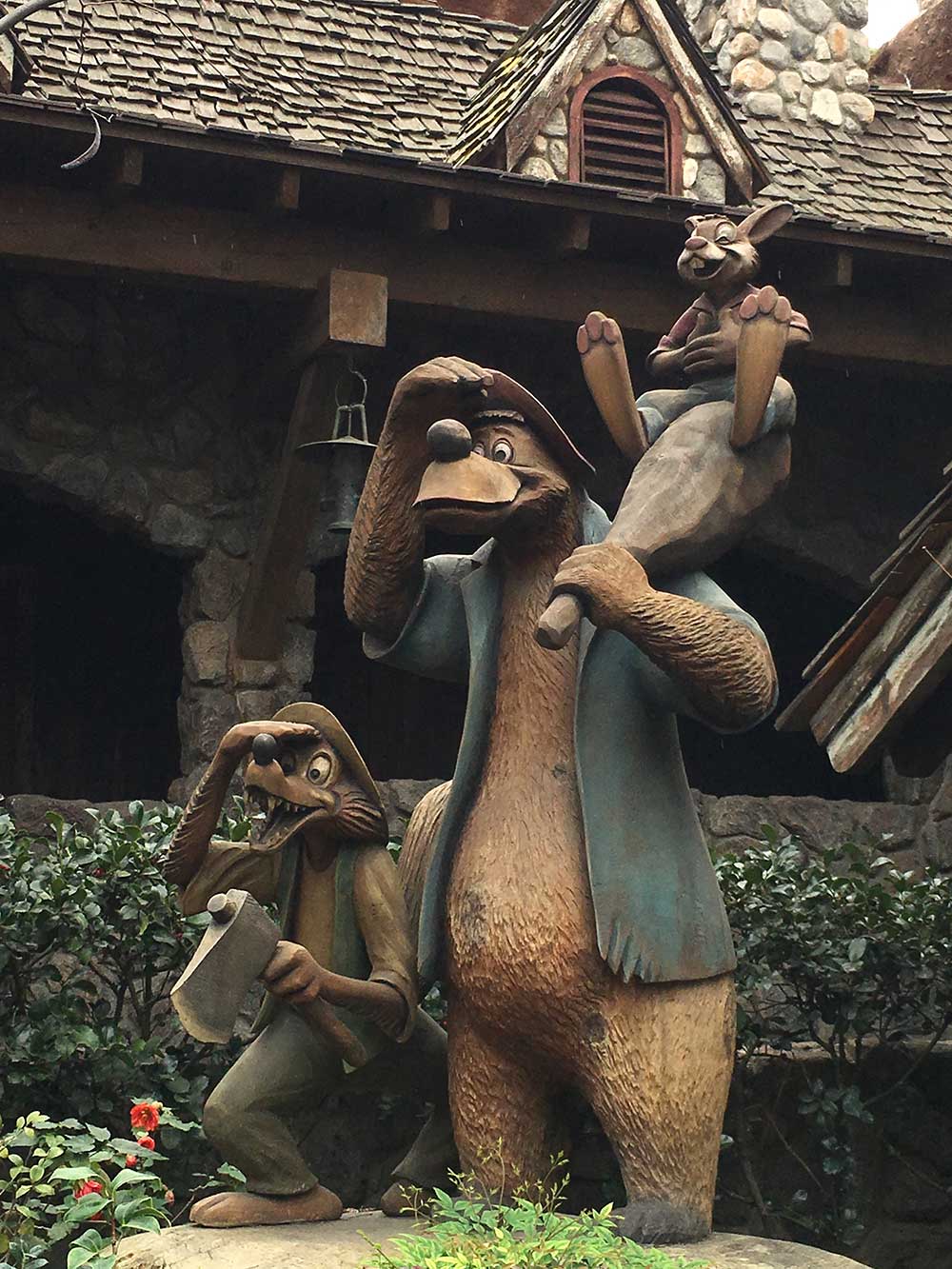 Choose Your Adventure at Critter Country!

Critter Country is filled with wonderful stories, suggestions for doing the right thing and choosing to be happy. Brer Rabbit would say, “oh please don’t throw me in the Briar Patch”… and then enjoy every minute of it. Winnie the Pooh would say, “Any day spent with you is my favorite day. So, today is my new favorite day.” Follow these characters’ leads and make every day a good day!

If you're ready to visit Critter Country for yourself, Get Away Today Vacations will help you get there and will provide your family with every detail to choose a fun adventure. Get Away Today Vacations can guide you to a creative vacation fit for every member of your family with everything from discount park tickets, a list of secrets to make your trip special, and information to the most affordable and themed hotel accommodations. Whether you visit Disneyland or beyond, book online or call one of their agents at 855-GET-AWAY. 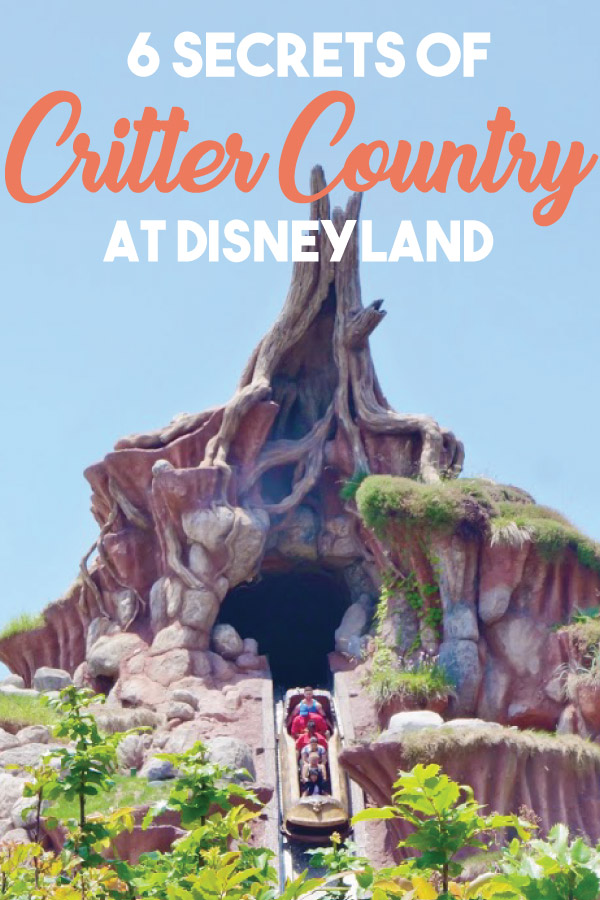